This past summer of 2014, Austria’s Mörbisch Lake Festival departed somewhat from its traditional programming of German operetta to present Anatevka, or Fiddler On The Roof as it is known to English-speaking audiences. Credit Dagmar Schellenberger, the Artistic Director with this unorthodox choice. On the basis of this new recording, Anatevka sounds fresh and richly rewarding. 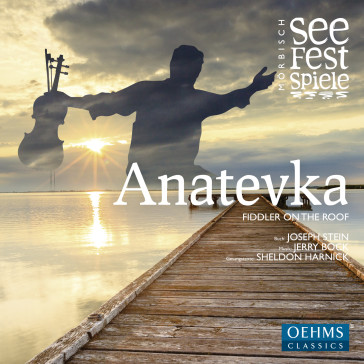 The cover of the 2014 Mörbisch recording of “Anatevka.”

The huge orchestra conducted by David Levi makes a strong case for this as the definitive German-language recording, compared to the traditional theatrical pit orchestration found on the previous Hamburg (Teldec) and Vienna (Preiser) recordings. The original German language adaptation by Rolf Merz (1968) has been revised by Gerhard Hagen.

Its Tevje, Gerhard Ernst (last seen in Mörbisch’s 2004 Gräfin Mariza), offers a sensitive portrait of a father challenged by his three daughters. Dagmar Schellenberger herself plays his long-suffering wife Golde with imagination and feeling. The new recording (70:40) is also notable for its completeness, including previously (in German) unrecorded Tevje’s Monolog with God in Act 1, Tevjes Antwort (Tevje’s Reply) in Act 2, and Chavaleh (Tevje’s meditation on the loss of his daughers).

There’s more dance music in “Jente, o Jente” (“Matchmaker, Matchmaker”), “Zum Wohl! L’Chaim!” (“To Life”), “Hochzeitungzug” and “Hochzeitstanz,” and the finale “Anatevka.” The earlier analogue recordings from Hamburg were constrained by the limitations of the LP in its day, the Hamburg recording (47:21) and Vienna (51:47).

Especially notable is the well-sung and exceptionally vivid “Tevje’s Traum” (“Tevje’s Dream”) which summons a both fearsome and comic grand-mother Fruma-Sarah.

If there is any complaint whatsoever, this new Anatevka recording lacks humor, particularly in Tevje and Golde’s bed-side duet, “Ist es Liebe?” (“Do You Love Me?”). But since the Mörbisch recording was recorded 40 days in advance of the Mörbisch stage season, that comic relief had yet to evolve before a live audience. And humor is often elusive or antithetical to the spectacle of the Mörbisch stage.

Having not actually seen this Mörbisch production, it is a wonder that the intimacy of Anatevka’s unlapping stories could be reconciled to the vastness of the seating for more than 6000 viewers. Neither this year’s Anatevka nor 2009’s My Fair Lady have any legitimate connection to Mörbisch’s natural setting of Lake Neusiedl. Perhaps Jerome Kern & Oscar Hammerstein’s classic Show Boat would be a better fit for future programming of classic American musical theatre works.

2015’s Eine Nacht in Venedig will welcome back water to its rightful place in Mörbisch’s musical story-telling.