When the invitation from Palazzetto Bru Zane arrived, to fly to Paris and attend a performance of Hervé’s V’lan dans l’œil, I was stunned. After a year of never-ending lockdowns and everything cancelled, from productions to conferences to lectures to film projects, it seemed that a return to life was somehow imaginable again. So, of course, I said right away that I’d love to come to France and see the production by Pierre-André Weitz at the Théâtre du Châtelet. Also, there was a chance to speak with Bru Zane’s artistic team about their various upcoming operetta plans, which include a new La vie parisienne with “40 percent new music.”

It’s not that life – in operetta dimensions – didn’t offer various interesting things since the Covid-19 pandemic hit. Many great new books have been published, CDs and DVDs were releases (including some outstanding ones by Palazzetto), and this particular staging of V’lan dans l’œil had been streamed in April 2021, as a performance-with-no-audience from Bordeaux.

On photos this production looked wonderful in a Pop Art kind of way, but the France3 broadcast was without English (or any) subtitles, making it difficult to follow the madcap story set in a fantasy land reminiscent of Der Freischütz where weird things happen between a princess called Fleur de Noblesse who has a unique passion for carpentry and a young cabinet-maker named Ernest. She has to navigate between what’s expected of a princess in a world of foresters and between her own true desires. It’s a bit like Once Upon a Mattress mixed with Spamelot and a heavy dose of Offenbach-style parody, which includes Meyerbeer yodeling in prison, a hilarious “Légende de la langouste atmospherique” and some Guillaume Tell bow-and-arrow moments. (For more details about the plot and history of the show, click here.)

Palazetto Bru Zane has already tackled other grand Hervé pieces in the past. For example: Les Chevaliers de la table ronde was sent on tour and played for over 50 performances around Europe. It, too, was streamed but never came out as a DVD or CD. V’lan dans l’œil is also based on a reconstructed score from the Bru Zane research department, which operates on the 3 million Euros budget a year which the foundation of Madame Nicole Bru provides, it’s money that comes from the sale of the famous UPSA pharmaceutical company. It’s money not just devoted the editing scores, of course, but used also for productions, stagings, publications etc. 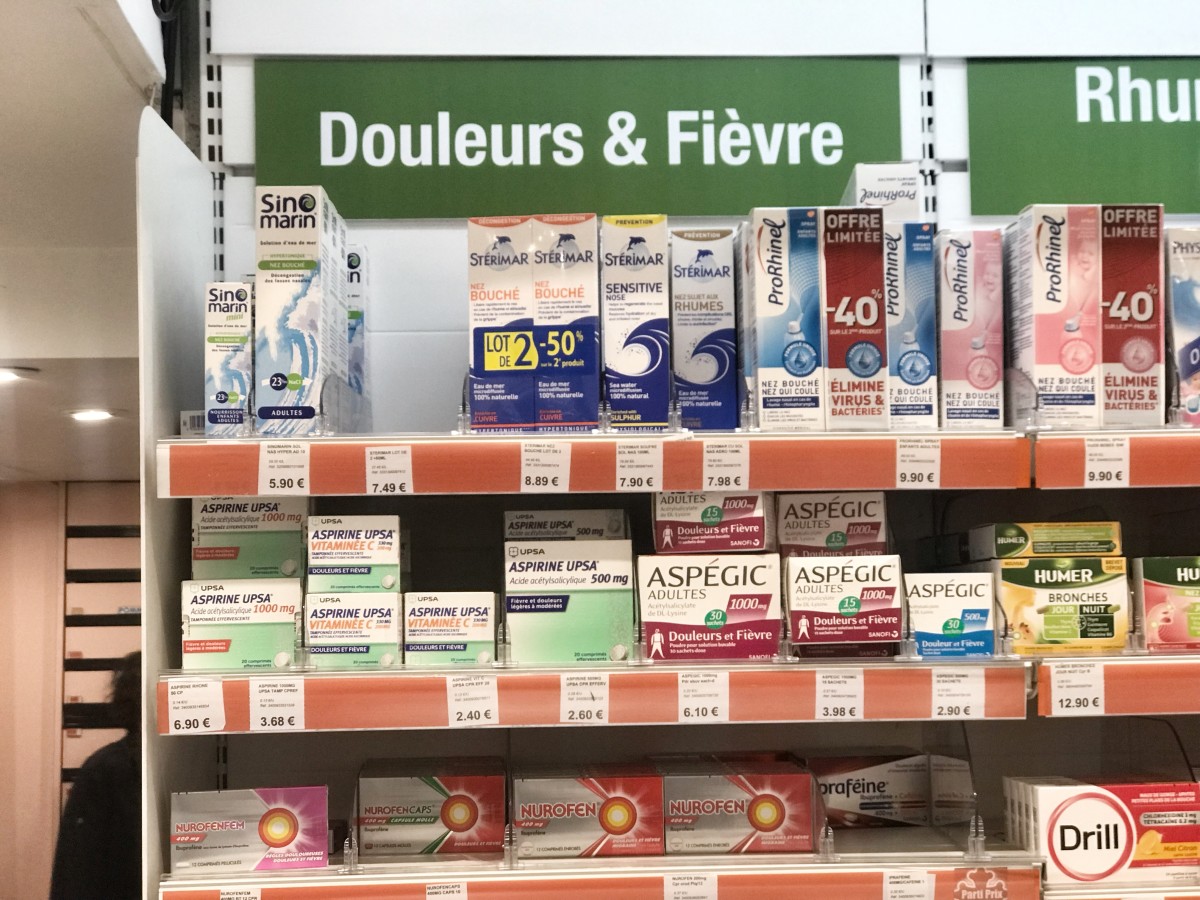 Bru Zane’s artistic director, Alexandre Dratwicki, claimed in Paris that this new Hervé is the original 1867 version of the show. Which is a bit weird, because that version was actually called L’Oeil crevé (“The pierced eye”), a hit that ran for 345 performances in its first year in Paris, returning regularly to the Parisian stage in the 1870s. It wasn’t until 1999 that the title was changed to Vlan! dans l’oeil for an Opéra-Comique staging, the company claimed, back then, that it had been Hervé’s original intention to call the piece thus.

So, putting L’Oeil crevé on in a reconstructed “original” version but giving it a later title can be confusing. Add to that confusion a newly inserted “Rondeau de la femme accomplice” from Hervé’s La Cosaque, presented as a drag queen moment for Olivier Py playing the Marquise de Haut-en-Truffes (Fleur de Noblesse’s mother) with screeching falsetto, and an inserted entr’acte to act 3 called “Espagnole et Séguedille,” and you wonder how original anything here is.

Sébastien Troester, the person in charge of Bru Zane’s musical editions, is certainly not to blame that Pierre-André Weitz decided to cut the dialogue of this 3 act show down to 100 minutes, making many developments in the story incomprehensible as linking bits were missing. Also, in the staging by Weitz, it’s never clear who is what in relation to everyone else. There are bearded ladies running around, leaving you guessing who they might be, there’s the Marquis (Flannan Obé) and Marquise, apparently unrelated to one another, there’s the tenor hero Alexandrivoire (Damien Bigourdan) and his beloved peasant girl Dindonette (Lara Neumann), but how exactly their love story relates to that of Fleur de Noblesse (Ingrid Perruche ) and her cabinet-maker Ernest (David Ghilardi) remains a big question mark, not to mention what the hyperactive gendarme Geromé (Pierre Lebon ) is all about… 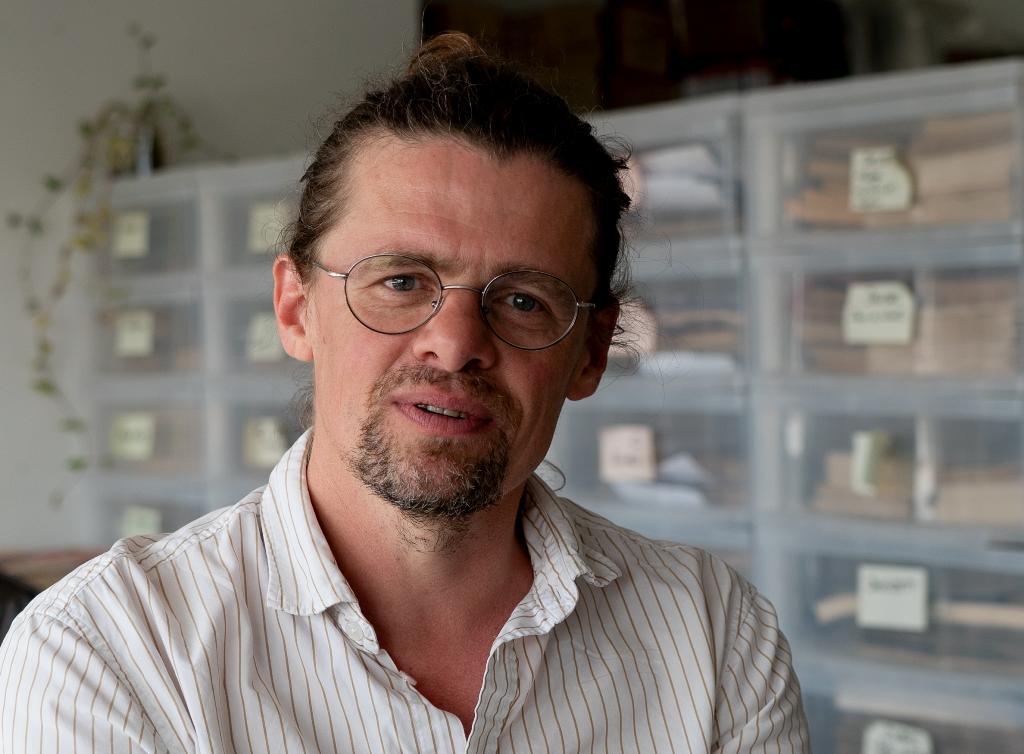 Conductor Christophe Grapperon and the Orchestre Pasdeloup don’t ask any questions, it seems. Instead, they play the music at maximum volume, and the conductor has the singers belt out the witty Hervé music as if this were Aida at the Arena di Verona, which allows for no nuance at all. And kills any fun you might have with this type of music, which is never as tuneful as Offenbach and needs a different approach to work.

But, it’s a chance for many to actually hear and see Hervé again, and potentially realize that there is more to discover than what this cast offers. They are all able-voiced opera singers, but no great actors who can carry the story or make its slapstick humor work. And none of them can deliver dialogue in a meaningful way, which – even in this abridged version – is painful to witness.

Damien Bigourdan as Alexandrivoire and Lara Neumann as Dindonette (left) with some forresters watching them declare their love. (Photo: Eric Bouloumié)

Alexandre Dratwicki says he wants to “introduce operetta as chic as possible” to a modern audience, and thus make that audience “take these pieces as seriously as a Massenet opera.” The Weitz production did look chic, no doubt about it, as do many of the Bru Zane operetta albums; but neither Hervé nor Offenbach are like Massenet, and taking them seriously should mean not casting them with second rate opera singers, but with first class actors who can sing!

In our conversation, Mr. Dratwicki admitted that it is difficult finding such actors who are convincing in the theater but also on a recording. Taking the easy route out and using standard singers instead of searching for glorious French comedians who can deliver this type of farce like Bouvril or Maurice Chevalier takes an effort, but it would be well worth that effort, especially if you plan to do a CD production. 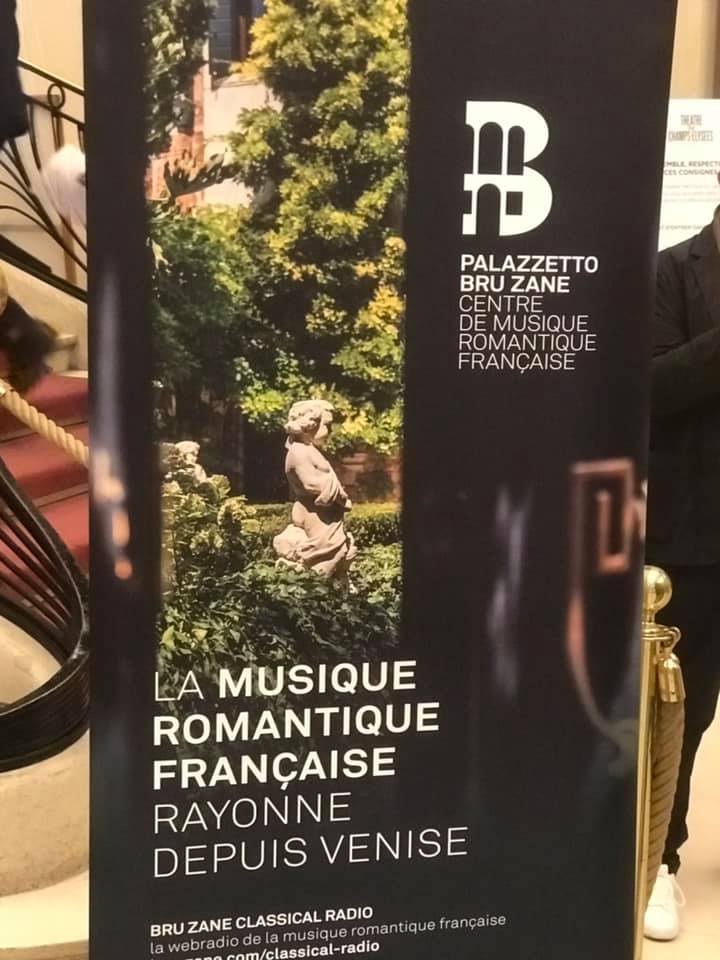 A poster for the 2021 festival for “Musique romantique francaise.” (Photo: Private)

V’lan dans l’œil is part of Bru Zane’s 8th annual festival dedicated to “Romantic French Music.” The series of performances at Châtelet was a short term decision when a US-production couldn’t come to Paris because of Corona restrictions. When I attended the second performance the Châtelet was remarkably empty, probably because Parisians – after so many months of lockdown – preferred sitting outside on a terrace and not inside wearing an obligatory mask. Also, no one famous was on stage to draw in a crowd. And Hervé is, sadly, not a household name, neither in France nor elsewhere. Even though there were posters all over the Paris subway advertising the production, they didn’t convince a majority of theater goers to come.

It still was a thrill to actually be in Paris, so I hesitate to be too critical or negative about V’lan dans l’œil. And I was invited by Palazzetto Bru Zane; it would be rude to not be thankful for this live Hervé experience. Being used to Barrie Kosky’s operetta madness or Christian Weise’s stylish over-the-top operetta interpretations, I found it difficult to adjust to Pierre-André Weitz‘ approach that seems to have no intellectual ambition and no understanding of what opéra bouffe is, beyond decoration. (For a 1870 definition of opéra bouffe, in English, click here.)

With three of Hervé’s large-scale works brought back by Bru Zane, it would be wonderful to see his medieval farce Chilpéric (1868) as a glorious fourth. Till then, the June festival in Paris finishes with a concert performance of La fille de Madame Angot at the Théâtre des Champs-Elysées, with Véronique Gens in the title role. Which is more prominent casting than that seen in V’lan dans l’œil, but still firmly rooted in the operatic approach that once characterized the recordings of Michel Plasson for EMI. However, Plasson had the all-round better casts, so if you want to outshine him and explore new interpretations you might want to consider a novel casting approach… (For a CD with various historical recordings, reviewed by Kurt Gänzl, click here.)

Talking of novelties, there will be more Lecocq. His 1887 opéra comique Ali-Baba is on Bru Zane’s to-do list. And in December 2021 a new production of Offenbach’s La vie parisienne will be unveiled; Christian Lacroix is not only designing the costumes but will also make his debut as a director. Apart from a tour through France there will be 16 performances at the Théâtre des Champs-Elysées; a 2023 recording is being discussed, also a DVD release. 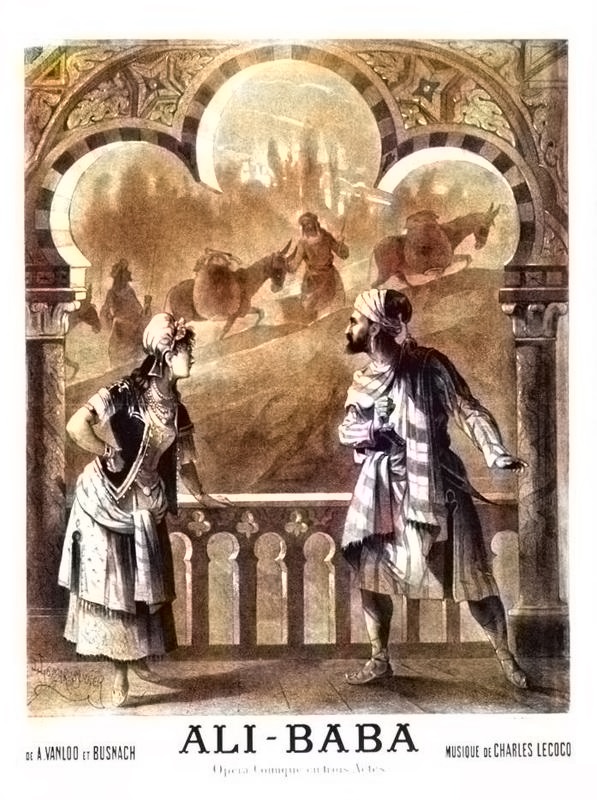 Sébastien Troester claims that he and his research team found the original La vie parisienne material intended for the 1864 world-premiere at the Théâtre du Palais-Royal, but apparently it was changed because the company of actors couldn’t cope with Offenbach’s vocal demands. The material (including a breathtaking Don Giovanni type finale) was later stored at the Théâtre des Variétés where Troester found it – and Jean-Christophe Keck didn’t, so Bru Zane says. They also point out that their new performance edition will be cheaper to rent, because theaters will not have to pay royalties for the intellectual labor the reconstruction involved, as is the case with the OEK.

Belgian soprano Jodie Devos is slated to sing Gabrielle, some of the current members of V’lan dans l’œil will also be involved. But because the production is intended to run for so many performances, there are double and triple casts.

Hopefully, also Offenbach’s Le voyage dans la Lune (1875) will return, it premiered in Montpellier – with no cuts – just before Corona put a stop to everything in March 2020. A CD production is in the making. Plus a revival of various short Offenbach pieces such as Le 66 that are ideal to put on – now – in times of Corona restrictions.

According to Mr. Dratwicki the endless lockdown and virus threat have made many people appreciate musical entertainment à la Offenbach and Hervé in a new way: their pieces are like a breeze of fresh air. And they are certainly breezy when set next to a composer such as Camille Saint-Saëns who is Bru Zane’s official 2021 thematic focus. 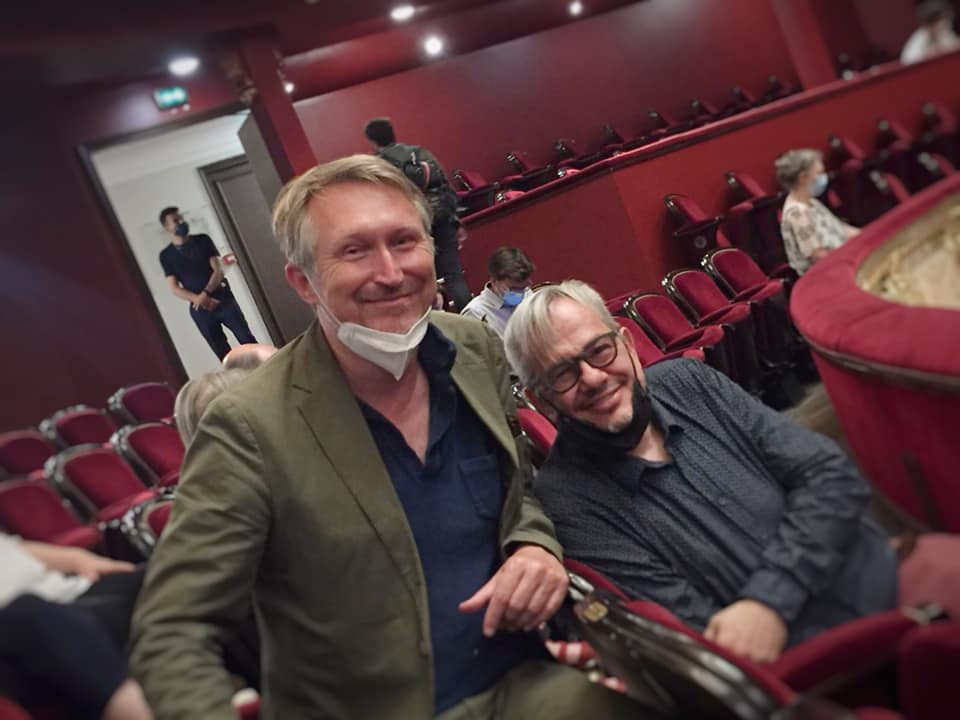 My own festival days in Paris were filled with wonderful conversations, including a lunch with fellow researcher Christophe Mirambeau who is busy working on a new musical comedy. Bru Zane invited many journalists from Germany, so there’s been extensive coverage of their “Romantic French Music” blast, including highly diverse reports on V’lan dans l’œil from Frankfurter Allgemeine Zeitung to Operetten Boulevard at Bayerischer Rundfunk (Stefan Frey came to see it). Whatever you think of V’lan dans l’œil, the title and Hervé are currently back in the press and discussed. And that’s wonderful.

In his otherwise severly critical review Marc Zitzmann says, at the very end, “Mehr davon, bitte!“ Let’s have more of this, please. I couldn’t agree more.

So, to finish, a big thank you to Palazzetto Bru Zane for having me and to Ulrike Olbrich from their German PR department for making this possible.