The sky is blue, the sun is shining, the waves are tinkling on the shore a hundred metres from me … And I’m indoors, with the windows and doors firmly closed, having a simply wonderful time. What am I doing? Why, listening to a fascinating CD compilation of my very favourite opérette/opéra-comique of all time: La Fille de Madame Angot. 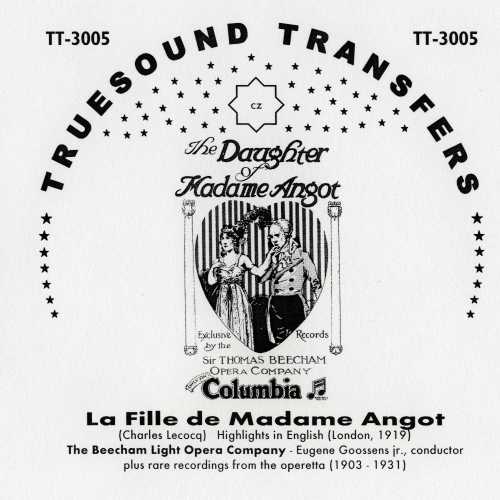 The cover of the Truesound Transfers album of “La Fille de Madame Angot.”

The Truesound Transfers CD arrived from Europe 48 hours ago, and I’ve put off playing it until now, because – well, quite honestly, there were so many probable reasons for my not enjoying this particular recorded version. I admire this show so very much, I can’t bear to hear it done any way but with a perfection that probably only exists inside my head. But after a litre of milk (truly!), I pulled my glasses on and started on the first section of the recording …

My reasons for potentially not enjoying it were (1) it is in English. And, seemingly a new translation. (2) There are sixteen tracks. What have they cut? (3) It was recorded, so the sleeve says, in 1919. I am not fond of ‘archival sound’. It is inclined to be flat, and the top notes blurt. (4) It is under the label of the ‘Beecham Light Opera Co’. Operatic companies’ casting can be so wrong in a piece like this of which the essence is its lightness.

So? Was I right to be afraid of those four things. Yes, but not really as right as I thought I was going to be. There is something wrong in each department, but the best items and performances are fine.

(1) The English words try hard to be colloquial and to fit the music, but don’t quite pull it off. Mostly, but not quite.

(2) Oh dear. The English were originally pretty unkind to this show. Because they played it as a star vehicle. But it isn’t. It has two leading female roles, and the battle between the two is the heart of the show. They need to be equal. The great Emily Soldene in the 1870s bolstered the role of Lange, Dolly Dolaro practically cut Lange’s role, for she played Clairette. This recording is a Clairette one. Great chunks of Lange are omitted. (Ah! I see they are coming, in French, in part two, and with an explanation for the why and how of the Brits lost them). 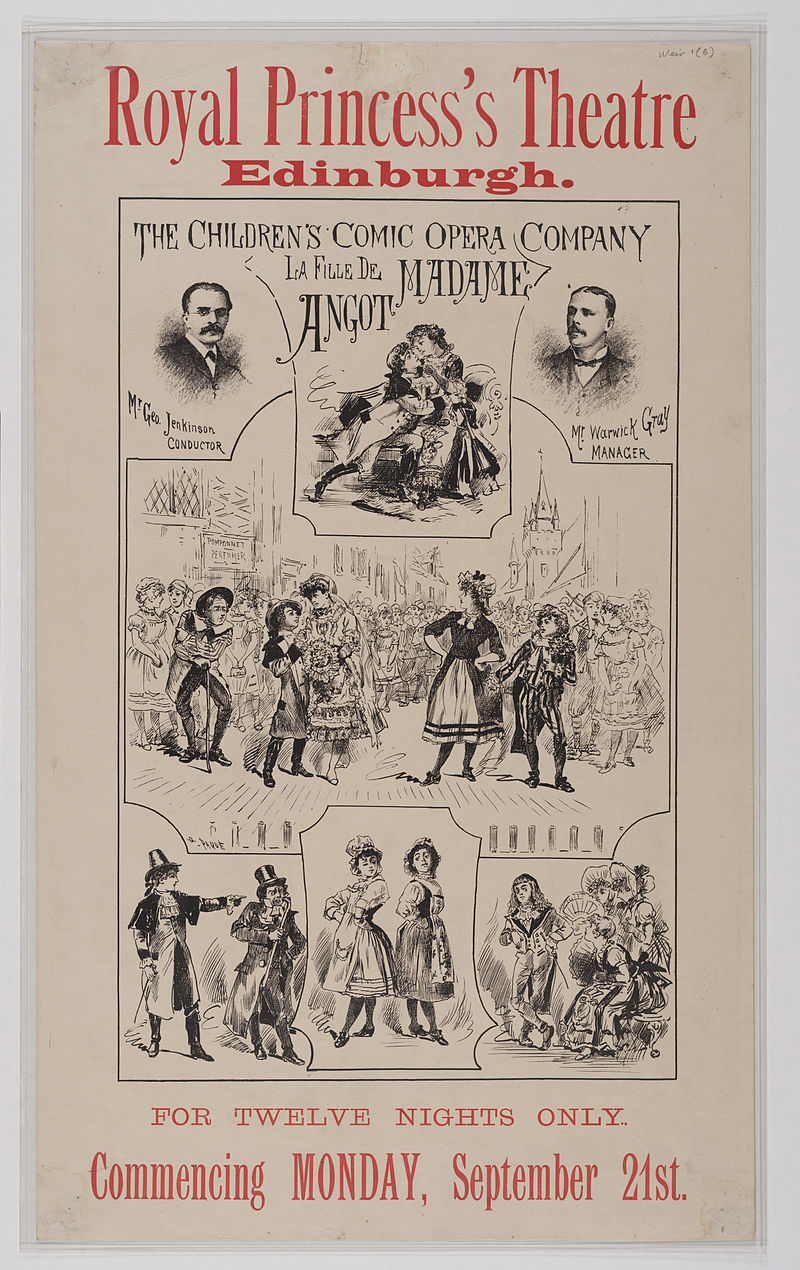 And the great hit of the show? The Conspirators’ Chorus? Not there. (Oh! it is coming too, in French). And why is the character of fishwife Amaranthe sung by an unpleasantly forced baritone?

(3) Folks don’t seem to agree on the date of these tracks. Which are amazingly clear in Christian Zwarg’s expert restoration and unblurty for their age. I say 1919 … because

(4) On 2 July 1919, Beecham’s Company opened at Drury Lane with almost the same company. 26 year-old Desirée Ellinger, the troupe’s Mimi, Butterfly, Nedda, Marguerite, Blondchen et al was Clairette, and as one can hear on this disc she was perfect casting. If we are to have an English Clairette, I can’t imagine one better.

She is as clear as a musical glass, and she isn’t afraid to can her soprano tones and become the raucous fishwife’s daughter in the Chanson Politique, or in the wonderful Quarreling duet – the best such number since The Beggar’s Opera cat-fight – that brings the last act to its climax and denouement (even if its tag is sliced off here). Miss Ellinger would succed to the role of Rose-Marie in New York and play Julie in Paris’s Show Boat. 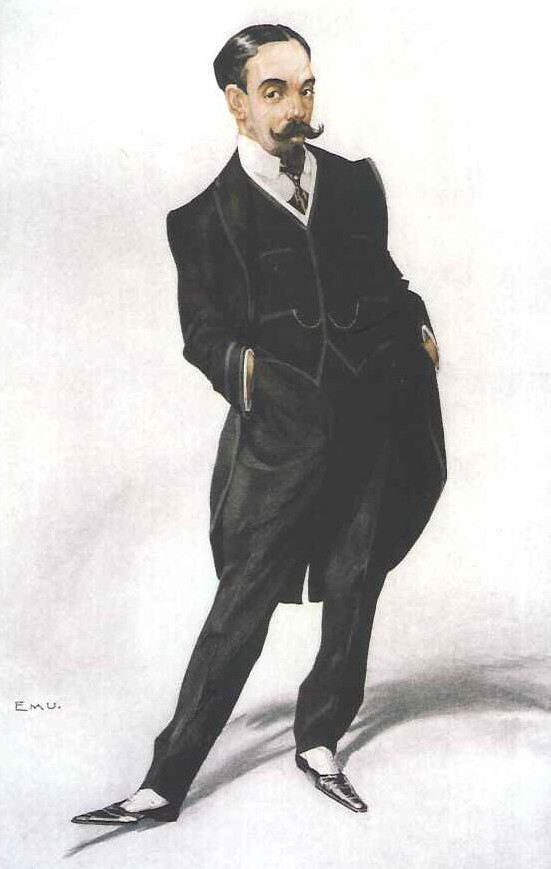 Thomas Beecham in 1910. First published in “The World.” Later re-used for the book “Thomas Beecham: An Obsession with Music.”

Her theoretical opposite number was played by a mezzo, Gladys Ancrum. It should be a lush soprano! This part was written for Marie Desclauzas. Soprano sex bomb. But some mezzos carry it off (especially mezzos who go on to sing Brünnhilde), and Miss Ancrum is one of them. We need her ‘Les hommes d’Augereau’ back desperately!

The show has always really been the women’s show. The role of the handsome revolutionary poet over whom they quarrel has some fine music, in the high baritone-low tenor register. I prefer a baritone. Beecham goes for a tenor. And instead of bringing in Webster Miller from Drury Lane he has a ‘guest star’. I know very little about the Rumanian tenor Constantin Stroesco. Apparently he took over the role. Anyway, he is a pretty fair tenor, nice and bright and edgy with only the odd accident which may not have been his fault.

So, our trio de tête is pretty solid. There, I’m afraid, performance-wise it stops. The light-tenor rôle of Pomponnet is taken by a lumpen baritone by name Herbert Langley. Apparently he was good-looking but we don’t see that on record. Just his strained tones. Surely there was a chorus girl who could have sung ‘Marchande de marée’ better. Or, like Soldene did, add it to the role of Lange.

I see Mr. Langley went into playing operatic silent films. Good idea. Larivaudière and Louchard are the play’s stuffed-shirt funny men so one doesn’t expect lovely vocalising from them … 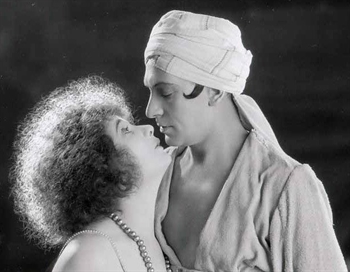 So, what we have here is actually an original cast recording, with Goossens at the baton … and it’s not a badly cast one at all. Except for Pomponnet. And the missing hits.

Right. On to the bonus tracks.

First we have Paris takeover Juliette Simon-Girard as Clairette with the Chanson Politique recorded in 1903. Age: 44. And she sounds like a teenager. Crisp, clear, characterful and I’ll bet that was the original tempo. Gold star! 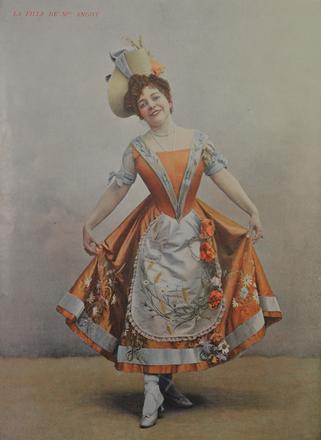 Next a 1906 Lange (Ida Vaudère) with the ‘missing’ entrance song. Hmm. Not for me. Hesitant and soubretty. Lange is a wily, plotting vamp not a milkmaid.

Number Three. 1908. Well, if you are going to have a baritonish Pomponnet, have one like Alexis Boyer. Everything his English counterpart did wrong, he does beautifully right. Why do the French turn out the best baritenors .. from Lefort to Souzay. Gold star!

Next up, the two schoolgirls duet. 1914. Marthe Chenal. Yes! Jeanne Tiphaine I don’t know. But, hey, two soprani! Yes! That’s what it should sound like! Like Les P’tites Michu. They’re bosom buddies at this stage! It parallels with the later Quarreling Duet when they have become rivals! 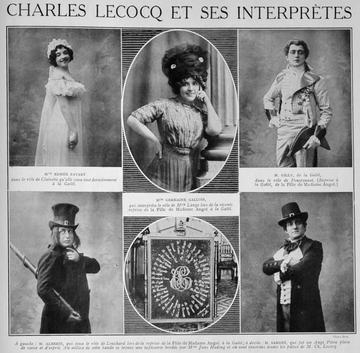 The big Lange-Pitou duet from 1910. Yay! Baritone-soprano! Rosalia Lambrecht I know, and she is well suited here, Ernest Clergue I don’t know, but listen … another French baritenor. They ar’n’t as well served by the recording as some of the others, but I’d hire them anytime.

The Hit! The Conspirators! (1909). Yes. I’ve heard it done better. They’re conspiring rather lustily. Pirates of Penzance style. OK, but no star.

Hm. A 1908 Clairette … labelled ‘mezzo-soprano’. Wot! Maybe. But it misses the light and grace of a Simon-Girard. Ooh. That top note! Hojotoho!

Ah Mr. Langley with another Duo des Deux Forts. We’ll skip that one. And, goodness, wherever did Christian Zwarg/Truesound Transfers find two tracks of an Italian Pomponnet from 1912? With piano. Oh. Yes. The Italians haven’t heard of tenorino. This guy would be a YouTube-ist in the 21st century.

Oh my goodness! And now a Pitou who sounds like a Pomponnet. Cruel voice production! Black star. And a Pathé recording, too.

Well, what a voyage. What a treat! What a simply brilliant exercise. Anything about which I’ve muttered in passing (why is poor Pomponnet so often the problem?) is not the fault of the producer of this disc. Christian Zwarg has presented us with just about every 1900s-1910s variation of casting known to woman: sop and mezzo Clairettes and Langes, baritone and tenor Ange Pitous and Pomponnets, a clapped out male as Amaranthe … good alternatives and not good at all. 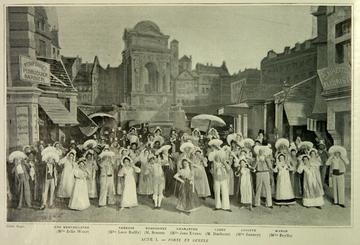 But I stick to what I came in as: the ladies sopranos both. One crisper than the other. A French baritenor for Pitou, a tenorino di grazia for Pomponnet, and a rough’n’tough dame for Amaranthe.

Truesound Transfers have cleaned up these old discs so that even I cannot complain about ‘archival sound’. Magic.

And they brought us back Juliette Simon-Girard, the very original Serpolette of Les Cloches de Corneville singing as if she were born in the 21st century instead of in 1859.

I feel quite emotional. Oh! Why don’t theatres bring back this marvellous piece? But then I suppose it would have to be sung in English, or Italian, or American … and that isn’t quite the same, even with Miss Ellinger from Manchester, Miss Ancrum from Norbiton, and Sig Stroesco from Bucharest.

A new production of La Fille de Madame Angot returns to the post-Corona stages in Paris at the end of June 2021, at Théâtre des Champs-Élysées; for further details click here. Palazzetto Bru Zane is in the process of recording it.

To order the CD from Truesound Transfers for 14,99 Euros, click here.