Marie Desclauzas was a buxom and eventually hefty star of the opérette stage who became the most admired musical character comedienne of her era. 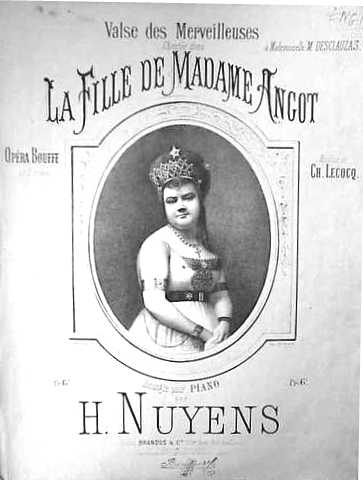 Marie Desclauzas [Malvina Caroline Ernestine Armand] was born in Paris on 13 July, 1841. She began her stage career as a child, touring and – in her mid-teens – appearing in Paris at the Ambigu, the Cirque and the Châtelet under Hostein in dramas and in féeries where her attractively rounded figure earned her a series of leggy travesty rôles. She then turned to the world of opéra-bouffe and there made herself a solid career as leading lady. This seems to have been initiated by a co-starring season (with the young Rose Bell) under the management of Jacob Grau and James Fisk in 1868-9 in America, where she appeared alternatively as Geneviève and Drogan in Geneviève de Brabant, as Boulotte, as Fleur de Noblesse (L’Oeil crevé), Piquillo (La Périchole), Césarine (Fleur de thé), Galswinthe (Chilpéric) and in La Vie parisienne. She followed up with seasons in Nantes, Marseille, Bordeaux, Toulouse and Alexandria before being appointed prima donna of the fine company at the Brussels Théâtre des Fantaisies-Parisiennes. 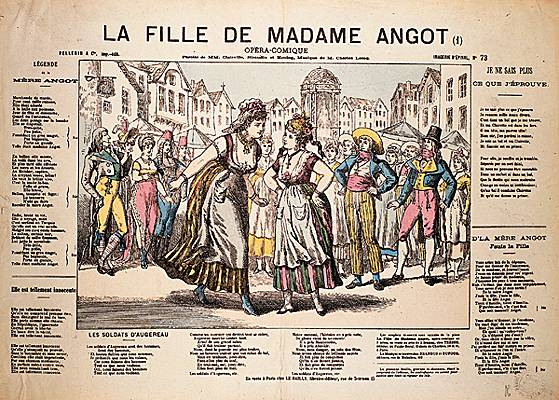 Scene from “La Fille de Madame Angot” in a newspaper.

When that theatre’s director, Eugène Humbert, produced the latest opéra-comique by the young Charles Lecocq, whose Les Cent Vierges had done so well for them earlier in the year, 32-year-old Desclauzas was duly given the leading rôle. She made such a success as Madame Lange, the luscious, plotting merveilleuse of La Fille de Madame Angot that, when the piece was taken to Paris and scheduled to be recast with metropolitan performers, Lecocq himself insisted that the Belgian creatrice of Lange be retained. 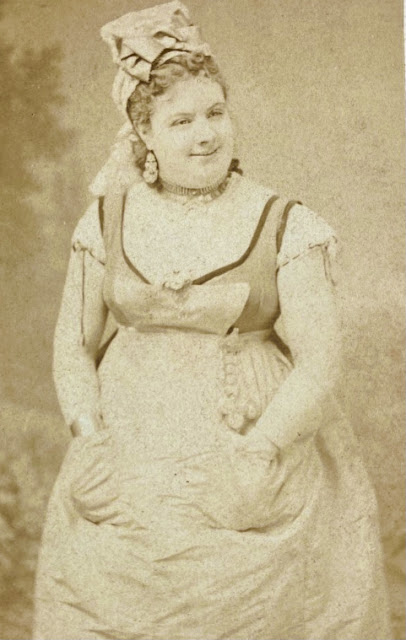 Humbert released his star to the management of the Folies-Dramatiques and Desclauzas triumphed all over again in the capital. After a long stretch playing Lange, she appeared as Manon in Auguste Coèdes’s La Belle Bourbonnaise, as La Belle Cousine in Hervé’s Alice de Nevers, and as Heloïse in a revival of Litolff’s Heloïse et Abélard (1874), but her now rather considerable bulk, especially when not hidden under the useful lines of Angot‘s empire gowns, barred her from most leading rôles and she tactfully changed direction, at 35, to make a speciality of character rôles which required a strong singing voice and a powerful personality rather than a shapely leg. 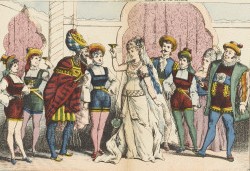 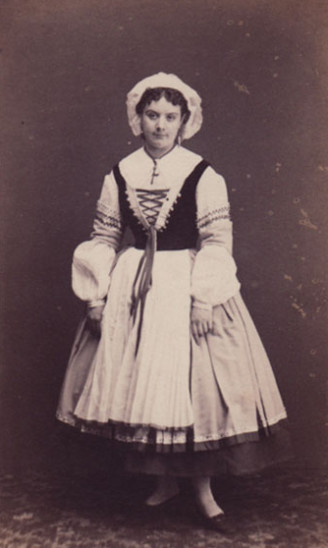 She officially retired from the stage in 1910, just two years before her death at the age of 71.

Her most famous creations were the irresistibly comical rôle of the Directrice in Le Petit Duc, a part to which she returned again and again over a period of 20 years.

Then, there is the vast, blowsy wardrobe mistress of the farcical Les Fêtards, with her memories of her days as a tight-waisted circus rider and her royal romance, but such was the artist’s emprise over this kind of rôle in her time that, for decades thereafter, such character parts, in old and new opérettes, were known in France as `les rôles de Desclauzas’.