Half the world loves Italian music, whether it’s popular songs of the „Volare“ type or operas from Rossini to Verdi to Puccini. But for some strange reason, Italian operettas – though melodically ravishing – have not really found a fan base outside of Italy. That’s a shame, because the great titles by Carlo Lombardo and Virgilio Ranzato, as well as Giuseppe Pietri, are well worth knowing. The production company InScena has issued a series of live recordings of the Compagnia Corrado Abbati on DVD, filmed at Triest’s attractive historical opera house. 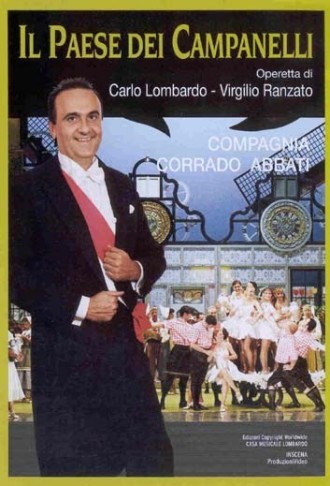 Let’s start with the most famous Italian operetta of them all, Il Paese dei Campanelli. It’s a bouncy and very sexually charged show written by Carlo Lombardo and Virgilio Ranzato; it premiered in Milano in 1923. The story is set in a picturesque little fishing village in Holland, where the inhabitants suffer from a curse: each house has a bell tower, and as soon as anyone cheats on his/her wife/husband the bells start ringing. As a consequence, everyone leads a chaste, bored and highly frustrated life. Until, one day, a ship with British marines enters the harbor in search for help. The foreigners change everything, because now the ladies of the town – fed up with their husbands – decide to collectively bonk the Brits. Which results in an act 1 finale of utter chaos: ringing bells, confused husbands and some very happy sopranos.

In act 2, the cheated husbands try to figure out what to do. And how to take revenge. A group of British music hall girls arrives, the former lovers of the marines. They revenge themselves with the Dutch men, and the Dutch men revenge themselves with the music halls gals. Until everyone is even, and a point is reached where the dreaded curse of the bells can be lifted: if no one trespasses on the particular night of the year just reached, the curse will go away. Of course the lusty fishermen and women have a hard time to stay chaste, after just having experienced such a sexual awakening, but they control themselves. And forthwith, it’s “anything goes” in this village of the bells – that don’t ring anymore. Happy end.

The music to this 2 act operetta is fantastic. One great number chases the next. And the story, of course, is hilarious. There are lyrical love duets, snappy foxtrots, rousing marches, truly everything a great operetta needs. A black and white film version from 1954 captures the fun of the show to perfection. There used to be a double disc soundtrack available, which is probably the best – and most characteristically sung – version of the show imaginable. In comparison, the new version directed by Corrado Abbati is …. Shall we say dull? The over-the-top boisterousness of the piece is reduced to the typical humor of old Italian men, personalities such as Pippo Baudo, the jokes are mostly delivered in a lame way, and the singing is never more than adequate. Still, it’s a color version of the complete show, conducted by Marco Fiorini with a noticeably reduced orchestra. (There’s none of the opulence here that can be heard on the old soundtrack.)

The same can be said, sadly, about the other titles in the series: L’acqua cheta (1920) and Madama di Tebe (1918). They too offer glorious stories and glorious music, but you have to use your imagination to see and hear that while watching these new DVD releases. 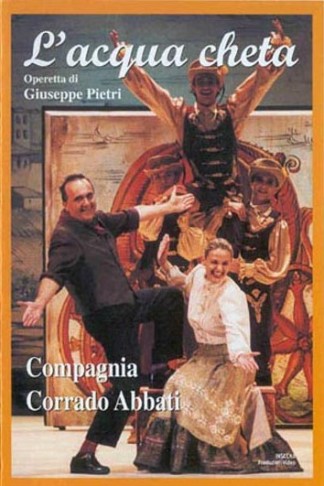 All of the shows would deserve English language performances. There have been attempts to bring Paese dei Campanelli to Germany, most notably by the Nazis to emphasize their friendship with Italy and to promote the axis Berlin-Rome. (An Italian troup was invited to present Paese in Berlin for that purpose, and a German translation was made to help the work find its way onto German stages, which it never did; it was probably too lascivious for post-1933 German audience’s operetta tastes.) In the more recent past, Fabio Luisi conducted a concert performance (in Italian) while he was working in Leipzig; it was transmitted on German TV, but it was never released on CD. It would have been a fabulously sung and large-scale (sound wise) alternative to the Triest performance on DVD.

Obviously, there is a world of treasures to be discovered here. The productions by Corrado Abbati and his company might not be ideal versions of these Italian treasures, but for the time being they are all there is. As a way of getting to know the shows, in slightly boring, yet no-nonsense versions, they are sufficient. If you can find the historical film soundtrack of Paese from 1954, grab it. It’s a joy from start to finish. As is the operetta itself.

If you want to be really adventurous, you can check out the other operetta offerings by Corrado Abbati & Co. too, anything from Fledermaus to Merry Widow to Csardasfürstin and Im weißen Rössl to Singing in the Rain. All sung in Italian, of course.