I don’t suppose the name means very much nowadays to anyone but a handful of music and theatre historians. Emily Soldene was a singer and, for a couple of nineteenth-century decades, a star among stars on the English-speaking stage. And I’m about to devote a sizeable part of the next goodness-knows-how-many years of my life to compiling her story… 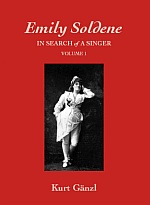 When first I put those words to paper, a good fifteen years ago and more, for a rather carefree magazine article, I had no idea that the search that I was announcedly letting myself in for would last such a very, very long time. Nor that it would take me all the way from London to the Hertfordshire countryside, to New York, San Francisco and Sydney, to Gundagai, Australia and Christchurch, New Zealand, not to mention – more conventionally – to Emily’s final resting place in Shirley, Surrey, England.

Nor did I then imagine even half of what I and the many, many folk who have helped me during the vast length and breadth of my grandiose quest, would find during what ended up being nearly two decades of searching. For Emily Soldene was, as I was quickly to discover, a woman of very many parts indeed. And not all of them obvious or well-known. She was a singer, of course. That was her main and public claim to fame. A singer who shared a concert platform with such vocal and operatic stars of the Victorian era as Sims Reeves, Carlotta Patti, Ilma di Murska, Helen Lemmens-Sherrington and Charles Santley; who introduced Bizet’s brand new Carmen for the first time to the British provinces; and who stunned audiences and critics on both sides of the world with her vivacious, voluminous and sexy performances in op?ra-bouffe and comic opera. For Emily Soldene was the single outstanding Offenbach and Hervé leading lady of her time and, indeed, more likely than not, of all English-language time. 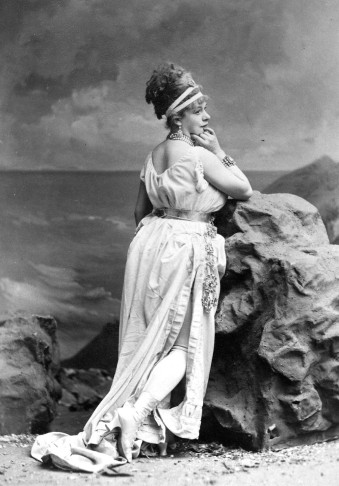 She was a star of the heyday of the British music hall, too; for several years a principal boy of the best of British Christmas pantomimes, from the East End to Glasgow; and, ultimately, even, a huge headliner on the American burleycue stage, all as a part of a colourful career as a performer which lasted through more than quarter of a starry century and gleefully ran the gamut of theatrical styles from Trovatore to the Tivoli. An actress, a producer and a director, a theatre manager, a Broadway-produced playwright and a published novelist, a journalist and for twenty picturesque years a high-flying and intermittently daring gossip columnist in each of the world’s hemispheres – all of these was ‘Madame Soldene’ and, at the same time, a wife, four times a mother, a grandmother and a great-grandmother. And, most enduringly, the author of the most colourful and scandalous memoir of the Victorian stage ever written.

The innocently-titled My Theatrical and Musical Recollections By Emily Soldene, published in London in 1896, turned out to be the high-society shocker of the last years of the nineteenth century. ‘Each and all she puts them to bed’, gasped one critic as Emily reeled off with casual but precise bonhomie the names of the long list of aristocratic and moneyed gentlemen who, in everybody’s youthful days, had dallied where the girls were, behind the scenes of the theatres where she had starred. ‘Even the succession could be in danger’, cried another, as Emily gaily grinned out the story of the birth of a ‘royal’ baby to one of her prize ‘five foot ten all in proportion’ chorus girls. And, in the wake of all this Victorian aghastness, her book – needless to say – sold like King Alfred’s cakes. Scorched bits and all.

It was those three hundred merry pages of Recollections which I, then all unknowing, chanced upon on one 1980s day, hidden deep among the turrets of old volumes tottering on the floor of a now extinct second-hand bookshop just along from the Brighton Theatre Royal, that launched me on this project.

Because I fell in love with Emily’s book at first read. But it wasn’t just that. Not just a simple coup d’amour.  I was a bit annoyed, at first read, to see that the previous owner of my precious book had scribbled his personal comments in its margins. They were in pencil, though, so I would be able to rub them out. Fortunately, before I started wielding my iconoclastic eraser, I noticed the bookplate inside the front cover. Ex libris Clementis Scott. My book had been originally the property of no less a personage than Clement Scott of the Daily Telegraph: the most important, accurate and intelligent theatrical journalist of the Victorian age.  Not to mention an intimate acquaintance of Madame Soldene. And those scribbles were his comments on what she had ‘told’! And an idea crept into my head.

Originally, it was my intention simply to republish the long-out-of-print book that Emily had written, holus bolus, along with Scott’s little bundle of revelatory remarks and a helpful home-made dose of explanatory notes on who was who and what was nineteenth-century what, for the benefit of twentieth-century readers.

But, having begun, I very soon realised that that sort of thing wasn’t going to be anything like good enough.

In next to no time, I discovered that there was much more – so much more – in the way of truths and tales, personal and professional, that for one reason or another Emily hadn’t seen fit or wise to elaborate on in her book, that needed to be in there if we were going to have the ‘whole truth and nothing but the truth’.  And, being younger than I am now and just as foolish,  I decided that, a century down the line, I would be the one to help her out a bit. And that’s how and why I began my mighty search. 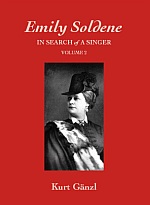 This pair of volumes – with Emily’s original, loosely-printed three hundred pages and dozen pictures now grown into some fifteen hundred tightly-packed pages with almost seven hundred illustrations – is born from all that I found once I started looking. Digging. Asking questions. Going back to primary sources to check out from the ground up what were supposed to be ‘known facts’.  Coming at the whole thing sideways when the Victorian world wasn’t looking, and finding things I am sure the Victorians never thought anyone would ever go looking for or checking out. There will be a few red faces in the depths of a few old graveyards tonight.

But enough said. Here it is, the finished product.

It’s a double-volumed and also a double-headed piece of work. You have, on the one hand, the tale of my search for my singer – the where and how and with what energies I and my friends dug and chased in pursuit of Emily’s hidden verities -  but on the other hand, and much more importantly, within these pages you have the fullest life-history that I have been able to reconstruct, a hundred and forty years after Emily Soldene burst on to the world’s stages, of a most truly remarkable woman and of her years in that incomparably vigorous and variegated world which was the Victorian musical theatre. I hope you’ll enjoy both stories.

As for me, now that our long ‘affair’ is – I suppose – over, I can safely say that I reckon ‘Madame Emily Soldene’ has been worth every minute of the one-third of my life that I’ve devoted to her.

I hope you will think so, too. Boswell did it for Johnson, Holroyd did it for Lytton Strachey, but Emily and I have (with only a few disagreements) done it together. And at comparable length!

As the song goes, “This is my monnnnnn-ument”. Hers. And mine, too. Not my two volumes of British Musical Theatre nor indeed my three tomes of Encyclopaedia of the Musical Theatre. This one. This one I get buried with. Which will make a change from being buried underneath it, as I have been for so long.

Read. Enjoy. She’s all yours.