With a delay of almost five months, the new production of Johann Strauss’ Der “Zigeuner“baron [sic] finally premiered at Komische Oper Berlin. It’s a staging by Tobias Kratzer that comes with a long manifest on the company’s homepage, explaining why they chose to stick with a title that includes the hotly debated Z-word. And Mr. Kratzer himself has given various interviews explaining how the new title-with-quotation-marks is supposed to send a signal to the outside world that the creative team has thought intensely about the historic original title and isn’t using it without critical reflection. 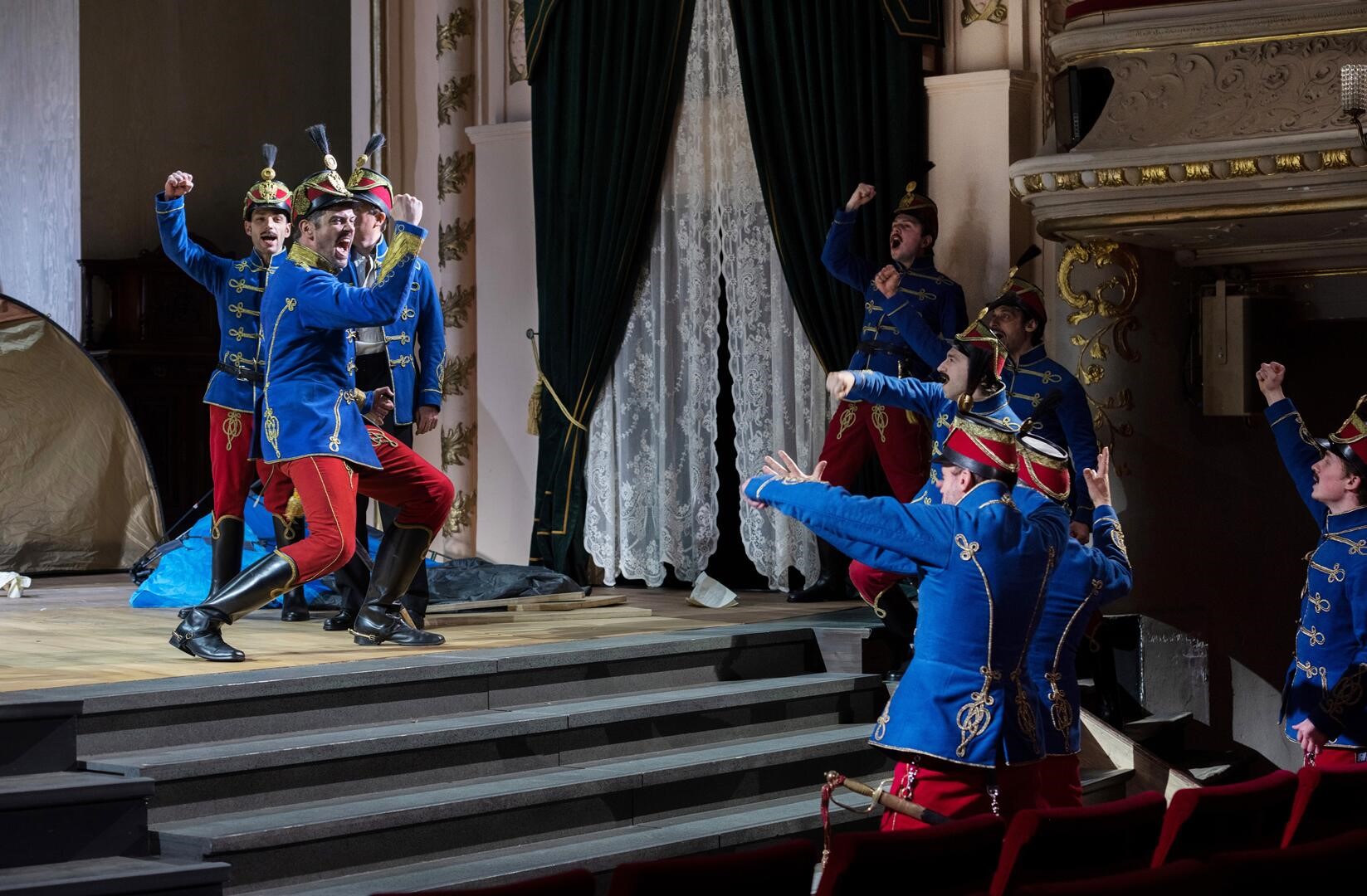 The new “Zigeunerbaron” at Komische Oper Berlin with Dominik Köninger as Homonay on the left. (Photo: Monika Rittershaus)

For those unfamiliar with the debate: because the peoples labeled as “Zigeuner” were persecuted and killed by the Nazis, for racist reasons, many Social Justice activists today demand that the Z-word should not be used anymore, comparable to the banning of the N-word in English. According to this logic, any usage of the term “Zigeuner” is demeaning and stigmatizing. Strangely, the same logic is not applied to other groups that were stigmatized and killed by the Nazis, such as the Jews or the homosexuals. The respective naming of these groups has not ever been challenged; and the fact that various members of the Sinti and Roma community actually want to continue using the Z-word doesn’t make the discussion any easier. (For an extensive interview on the topic with conductor Florian Ziemen, click here.)

With that said: It’s always good to know that a director has thought intensively about the show he (or she) is about to put on. In the aforementioned interviews Mr. Kratzer has spoken eloquently about Der Zigeunerbaron and pointed out many things that have made the piece so successful since 1885 and still interesting in 2021. 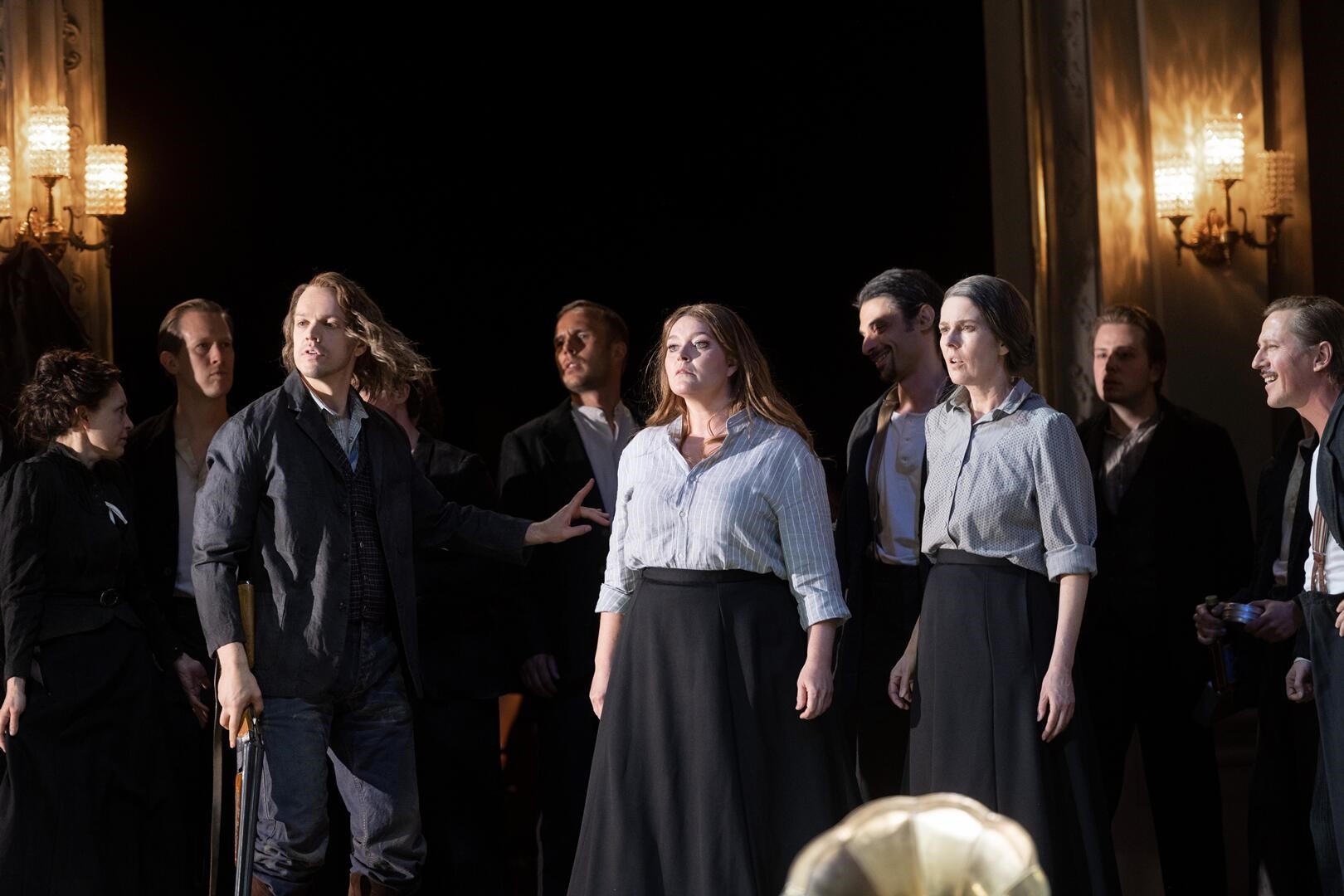 Thomas Blondelle as Sandor (l.) and Mirka Wagner as Saffi next to him in “Zigeunerbaron” at Komische Oper Berlin. (Photo: Monika Rittershaus)

Sadly, you see very little of what’s interesting about the story in this abridged version with runs just under two hours without intermission. On the mostly empty stage – which has the historic arcs of the Komische Oper staircase as a backdrop, behind which the orchestra is placed – we see a typical in-house cast of opera singers trying to deliver what might best be described as a Brechtian staging, filled with various V-effects. The problem is: to pull that off you need performers who can really act, who are not just delivering typical opera singer movements. Which makes this whole “concept” implode very quickly, actually right in the opening scene where you see Dominik Köninger as Count Homonay hovering near an old gramophone (eating a “Zigeunerschnitzel”), listening to the Strauss music via that gramophone, but then again hearing the music live from the background. It never makes full sense. And it becomes very tiring very soon.

Even the great hit “Ja das Schreiben und das Lesen” is offered as an advertising film clip in which we see Kálmán Zsupan (sung by Philipp Meierhöfer) as the enterprising pork meat manufacturer. It’s an amusing idea to turn that song into a film (with pre-recorded music), but it doesn’t take flight. 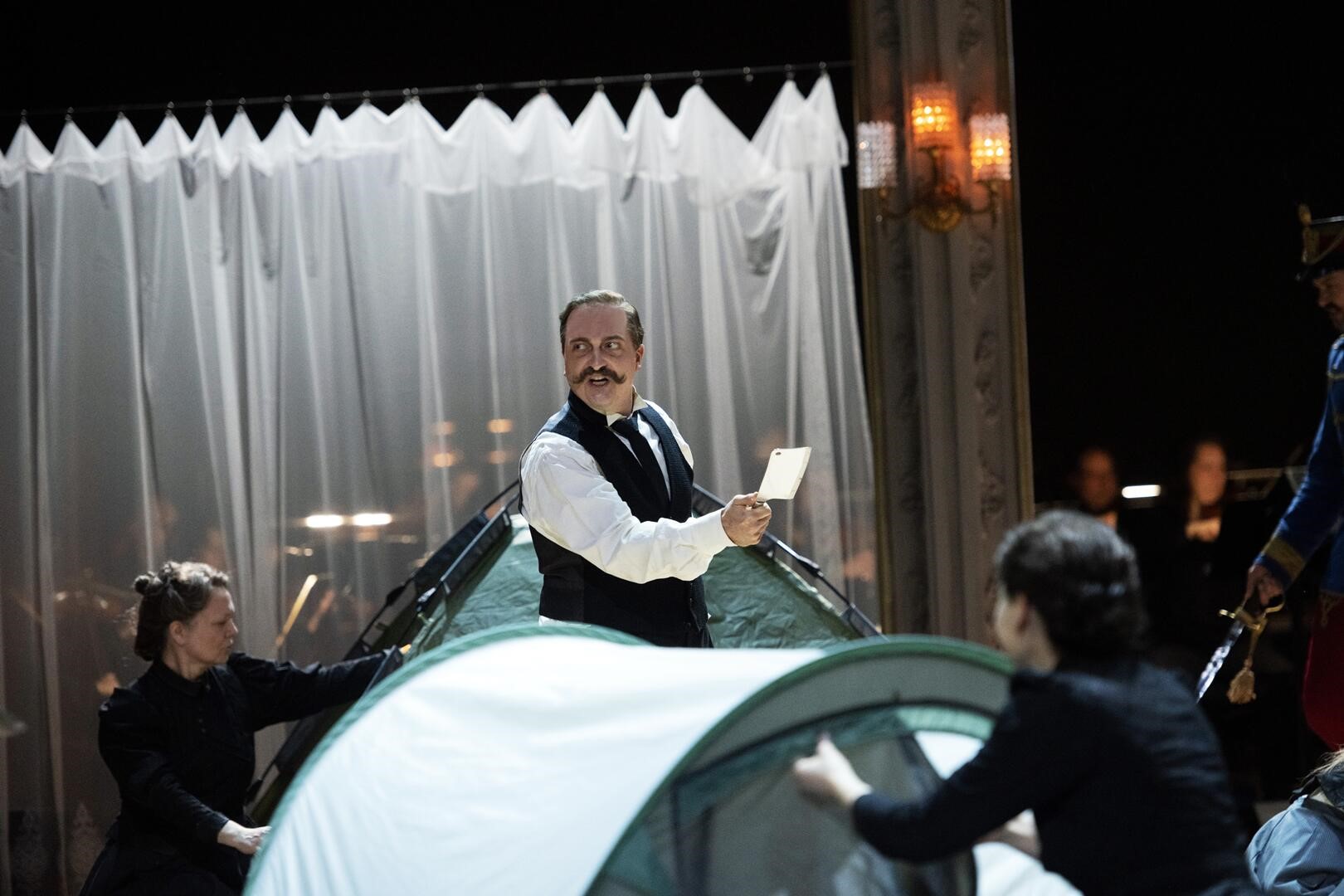 One of the main reasons the entire evening stays frustratingly glued to the ground is that conductor Stefan Soltesz presents a reading of the famous score that is really untouched by anything that has happened in recent years in terms of a new approach to the genre operetta – most importantly at Komische Oper itself. The Soltesz interpretation could just as easily have been performed, like this, in the 1980s in any provincial opera house. And that sort of kills any innovative ideas Mr. Kratzer might have had with regard to the piece.

Why the casting director of Komische Oper didn’t give Mr. Kratzer a different team of singers and instead opted for the most standard of standard interpreters (which include Thomas Blondelle as Sándro Barikay, Katharine von Bülow as Czipra, Alma Sadé as Arsena and the bright voiced Julian Habermann as Ottokar) remains a mystery. I’d say it’s downright sabotaging the production, or at the very least counterproductive.

Helene Schneiderman sings Arsena’s gouverness Mirabella. In her big number describing the war in Belgrade, during with she got raped, she sings all the verses but her words are not clearly comprehendible, which kills the fascinating narrative. (Turned into an existentialist Angst cry here.) If you’ve heard this showstopper as a fun and self-assured feminist interpretation on the old Harnoncourt recording, performed by actress Elisabeth von Magnus, you will be keenly aware what’s lacking here. Ironically, Komische Oper has people such as Dagmar Manzel who could pull this off in her sleep – and who knows how to handle a Brechtian staging – but she is not included here.

Since this is all done “traditionally” you become very aware how difficult this music is to sing when done in the “old fashioned” style. And you realize that Mr. Blondelle doesn’t have the bravura top notes to dazzle as “Flotter Geist”, that Mr. Meierhöfer isn’t juicy enough for “An des Tachos Strand” etc etc. The best vocal and acting performance comes from Mirka Wagner as Saffi. Which makes it extra frustrating that she only gets to sing one verse of “Wer uns getraut?” with those melting soprano tones. 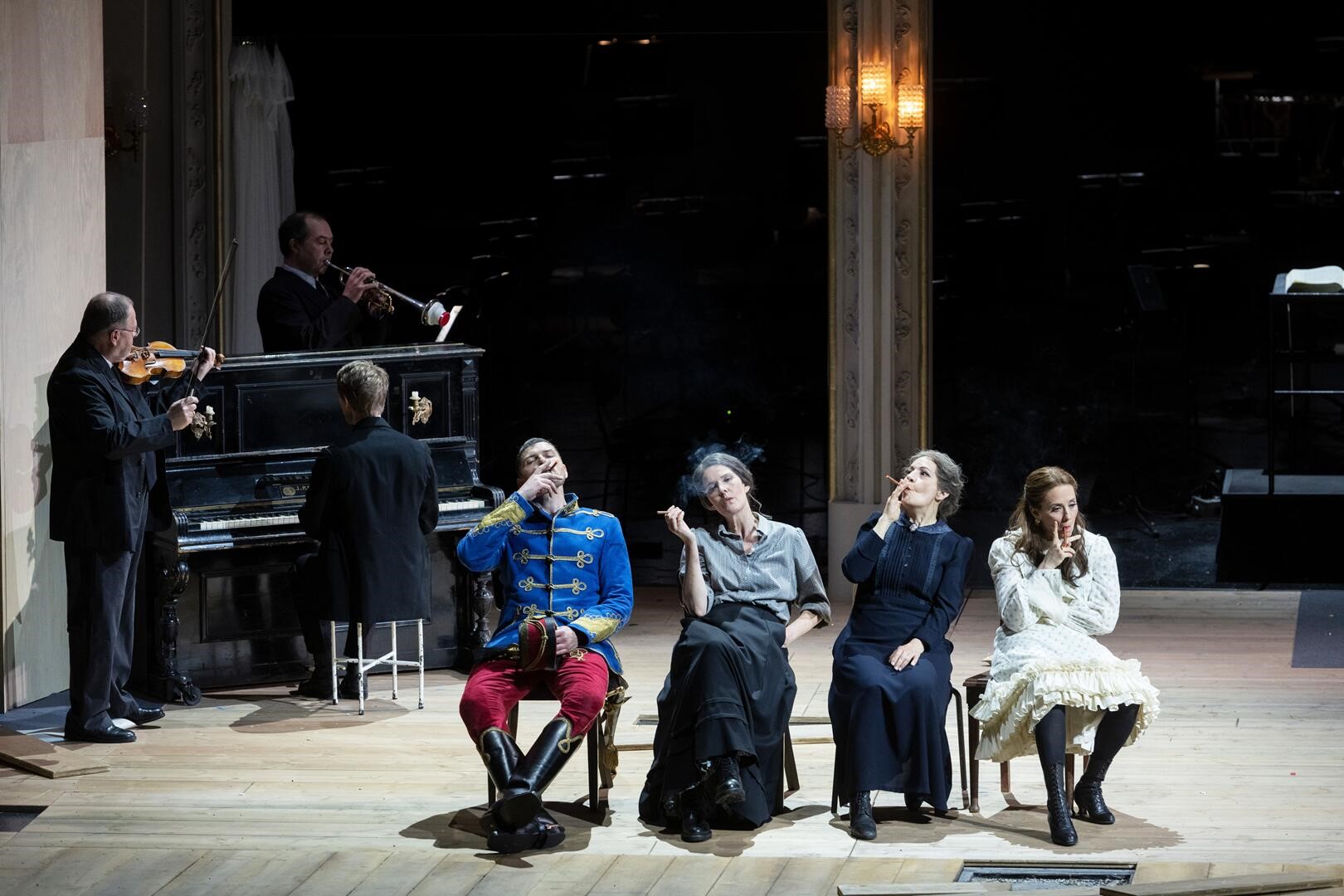 The story by Ignaz Schnitzer and Maurus Jókai has been serverly tweeked, characters such as Conte Carnero (and the entire “Sittenkommission” element of the plot) are gone, with it goes a lot of typical 19th century operetta fun. Because the orchestra is situated so far in the back (and not in a kind of shell that projects the sound forwards, like at Hollywood Bowl) you hardly hear the players. And Mr. Soltesz is not someone who seems to have any enthusiasm for the rousing dance rhythms that form the basis of so many numbers. A lot of the music sounds downright boring, which it absolutely isn’t.

The result? A lukewarm reception, unusual for Komische Oper, hardly any applause after individual numbers, and only polite clapping at the end. (Mirka Wagner got the greatest cheers.) Tobias Kratzer wasn’t there for opening night because of a death in the family. And: Berlin’s senator for culture, Klaus Lederer (Die Linke), was also noticably absent, possible because he didn’t want to be officially seen at a premiere that might backfire because of the “Zigeuner” controversy.

Coming Sunday, there’s a matinee and discussion on Der Z…baron: Vom Umgang mit Stereotypen im Musiktheater about racial/racist stereotypes in musical theater. And there are three more performances this season.

By the way: After so much advance refelection on the Z-word, it’s somewhat surprising that everyone in this production talks about Zigeuner nonstop, but not with them. There are no representatives of the Sinti and Roma communities to be seen, anywhere.