Finally, Paul Ábrahám’s football vaudeville Roxy und ihr Wunderteam returns to Vienna, the place where the German version by Alfred Grünwald und Hans Weigel originally premiered in 1937 and made a splash with a stellar cast that included Rosy Barsony and Oscar Denes. Then came the “Anschluss,” and the show plus the film version disappeared – for a very long time. Now, Volksoper Wien has announced a new production for next season, opening on 11 September 2021. 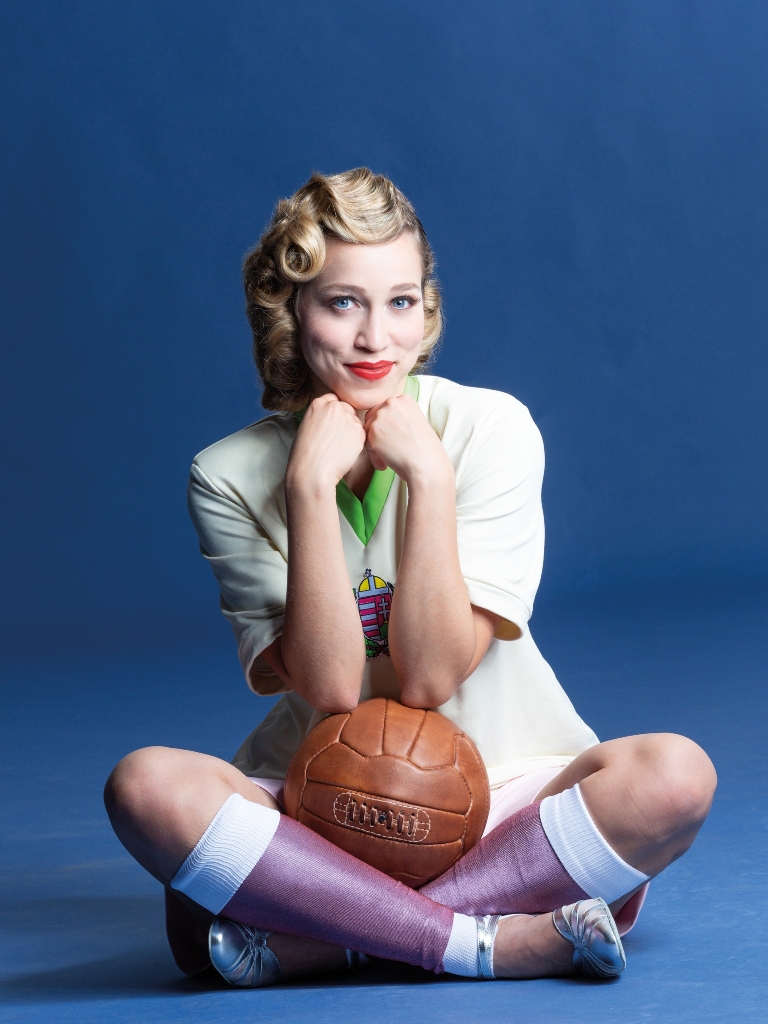 This staging is by Andreas Gergen who already tried his hand at Ábrahám in Mörbisch with a semi-convincing Viktoria und ihr Husar. He partners up with set designer Sam Madwar, known for his opulent and inventive decors. And Kai Tietje conducts, as he already did in Berlin at Komische Oper. It’s very likely that he’ll use the same “adapted” version of the score that sounds more like a glossy musical instead of a snappy vaudeville. But that doesn’t have to be a bad thing.

In contrast to Berlin, where Christoph Marti played the title role cross-dressed, adding a strong homoerotic element to proceedings, Volksoper offers Katharina Gorgi as a “strictly female” Roxy. Plus Jörn-Felix Alt, who was Hatschek in Berlin and pretty outstanding as a jazz operetta interpreter; he’s now upgraded to play Gjurka Karoly, the captain of the football team and the juvenile male lead here.

Since Mr. Alt is currently also playing the waiter Albert in Ábrahám’s Märchen im Grand-Hotel at the opera house of Nuremberg, it seems that various theater directors (and casting agents) have spotted his talents for this kind of repertoire. It’s high time that he brought out an Ábrahám album on CD and breathe fresh air into an often stale discography. And perhaps someone can convince him to do an operetta concert on stage and show of his dazzling dance movements?

Christoph Wagner-Trenkwitz as a representative of “traditional” operetta at Volksoper plays the radio reporter who guides the audience through the various matches that the football players are trying to win. And Julia Koci is slated as the resolute Aranka von Tötössy, director of the women’s school for educating mind and body. Departing intendant, Robert Meyer, gives a last star-turn as Sam Cheswick, Roxy’s stingy uncle from Scotland who wants to marry her off to an unloved man, which sets the whole story in motion.

There are 12 confirmed performances in the 2021/22 season. But who knows: if it turns out to be a hit, it might stay in the repertoire for longer. And with a little bit of luck there’s a TV broadcast.

The other operetta highlight next season in Vienna in Kurt Weill’s Lady in the Dark (if you want to see that as a bridge between European operetta and American musical). Roxy’s Fräulein von Tötössy, Julia Koci, plays Liza Elliott, Robert Meyer is her shrink. James Holmes conducts (is there no one else around who could do it?) and the staging is by Matthias Davids.

For further information and other new productions, click here.