When you ‘live’ in a certain ‘world’ – in my case, that of the 19th century musical theatre – you become imbued with its atmosphere, it facts, its alliances and its people. Sometime the dots join up in the most unexpected and surprising way. That’s what happened today. 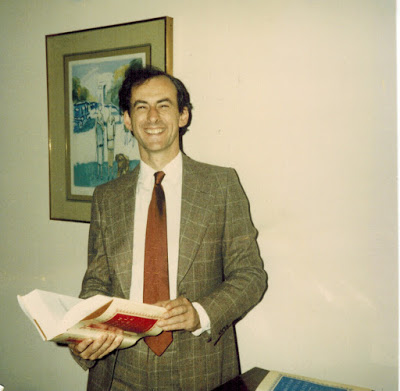 Once upon a year … a 20th century one, round about 1979-80, I think, when I was spending all my wages on any music, programs, ephemera that I could lay hands on to go into the making of my The British Musical Theatre, I scooped up a few autographs. Now, I don’t usually bother with autographs. Apart from the fact that I know how many star signatures I have signed ‘on behalf of’, they don’t actually tell you anything. Unless, of course, they are attached to a letter or other document of some interest. But in 1979, I was young, eager, foolish, had 135 Pounds a week to splash about … bought quite a bit of nonsense, but fluked a few nice things.

So, I was glancing through an old folder of letters … some wonderful stuff! Pradeau, Julia Baron, Levassor, John Hollingshead, George Sims, T. P. Cooke … and a penciled scribble from Ivan Caryll on Gaiety Theatre headed paper and in a Gaiety envelope. Remember envelopes? 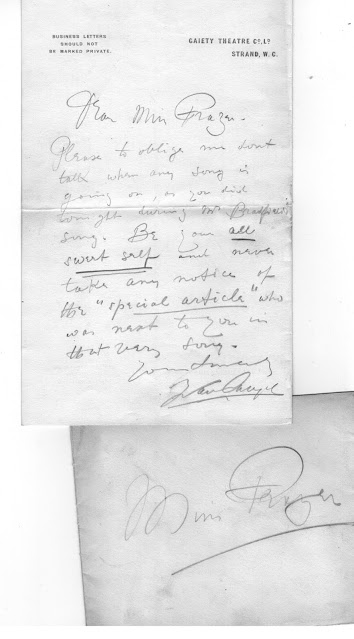 I read the scribble. What fun! A missive to a chorus girl, chiding her for chatting up what seems to have been a fellow in a stage box, or maybe a pal next to her on stage, while the jeune premier was singing his solo!

No doubt as to any of the folk involved, I think. Ivan Caryll alias Felix Tilken, the grand composer for so many musical plays which made their way around the world – America, Europe, Australasia – in the turn-of-the-century decades. (For more information on Ivan Caryll, click here.) 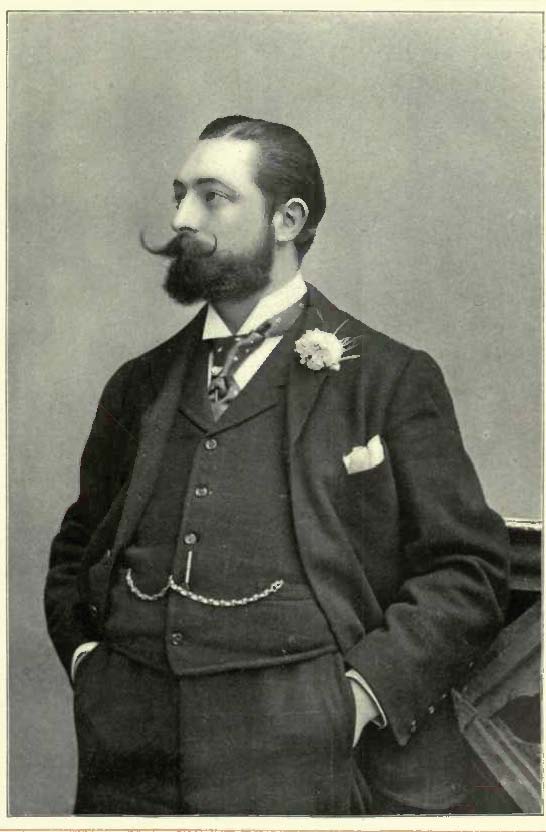 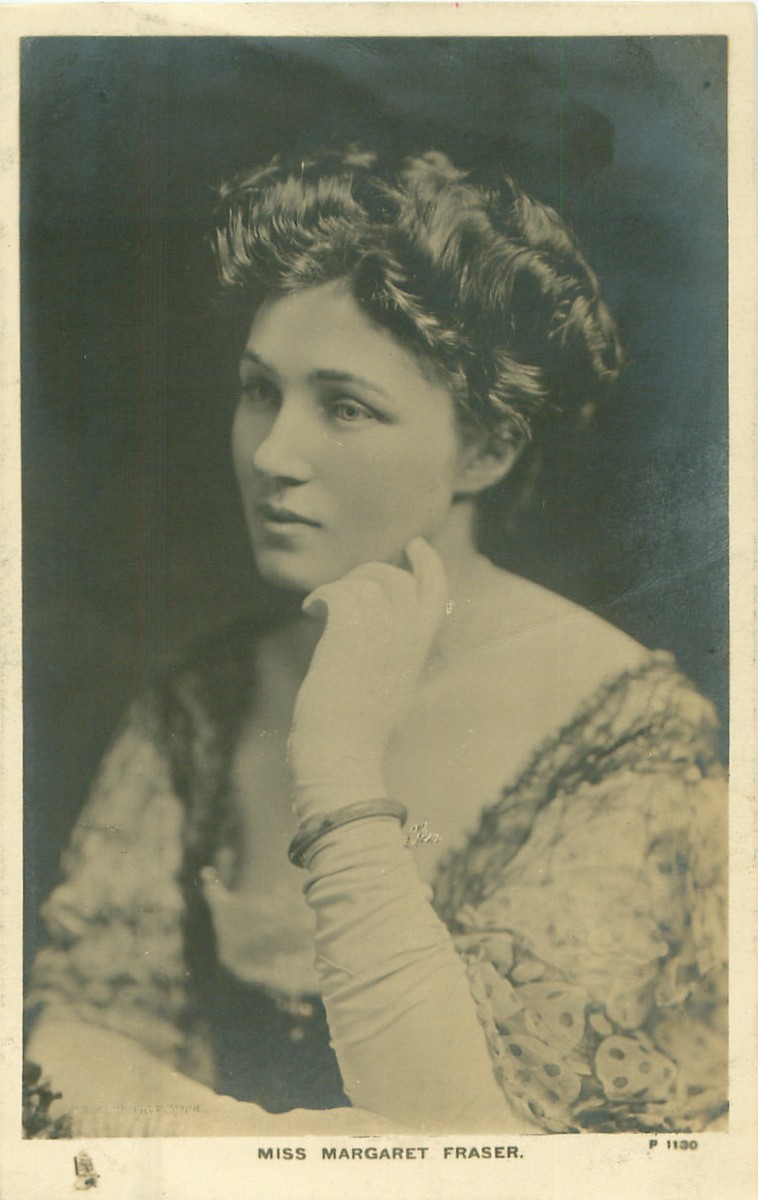 And the show? Annoyingly, Ivan didn’t date his note. And Bradfield and Miss Fraser appeared together at the Gaiety (and elsewhere) in more than one show. Both sisters played in In Town at some stage, as front-row dancers, they travelled to America with the Gaiety Girl troupe in 1894, and between 1895 and 1900 Margaret was seen in slightly featured parts in An Artist’s Model (Geraldine, solo dance; and then in the second London edition in an added ‘role’), The Geisha (Louie Plumpton), My Girl (Miss Veriner), The Circus Girl (Rose Gompson), A Runaway Girl (Agatha) and The Messenger Boy (Lady Winifred). 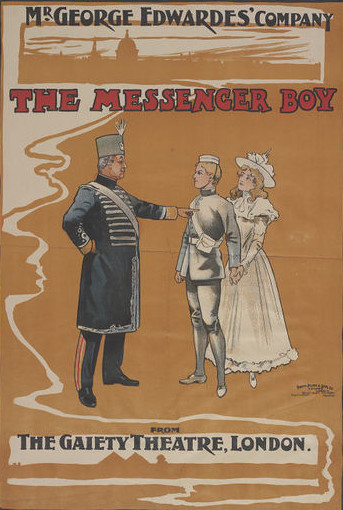 Poster for “The Messenger Boy” from the Gaiety Theatre, London.

All she was required to do was to look beautiful, which was evidently no problem at all, dance and high kick as required, and wear clothes magnificently. 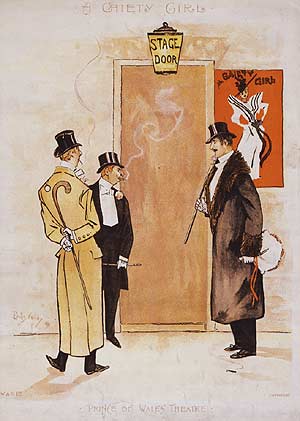 After some eight years under the Edwardes management, during which she spawned a thousand postcard pictures, she moved on to a little part in Bluebell in Fairyland (the juvenile Dorothy Frostick got the featured dance), before, all of 26 years of age, she gave up show-ponying for the dramatic stage. And she seems to have found a fan in the female-proof J. M. Barrie. She was cast in the little role of Fisher in The Admirable Crichton, understudying the lead juvenile role of Lady Mary.

Apparently, she went on, and must have done well enough, for the following year she was cast as Eleanor Gray in Barrie’s Little Mary. And a few years later, after a few odd jobs (2nd Lobster in Alice in Wonderland), she was cast as Tiger Lily in the 1909 production of Peter Pan. Finis, I think.

But who was this lovely young lady? Where did she come from, and what became of her?

The second question is answered in the press. Margaret lived to the age of 96, and died 1 September 1972, at 21 West Heath Drive, London NW11. And no, she was no longer ‘Miss Fraser’, she was the widow of a good and honored man, with two daughters. But let’s start at the beginning.

Margaret was born, not in Scotland, as is said on the web, but in Paddington, 14 August 1876. She was the daughter of the former Kate Brutton Ray, who had been foolish enough to wed a real rotter of a divorcé by the name of William Thomas Fraser, an officer in the 42nd Highlanders. To whom we shall return. Anyway, Kate too divorced him, and he went on to a third wife and a number of concubines … yes, well, Margaret first. 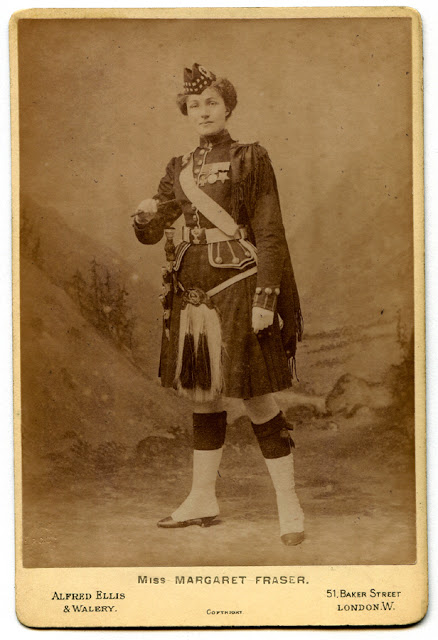 Margaret made her beauteous career, survived the perils of the Gaiety backstage, and, in 1914, married Captain Francis Jenkins of the Coldstream Guards. They had two daughters: Margaret (31 January 1916; d 1974, Mrs Geo L Evans) and Elizabeth Anne (1918-2009). Captain Jenkins had a fine career as a soldier and an administrator, in Nigeria and in Barbados (and Margaret went too) but died, too young, in 1927. An honourable life, career… 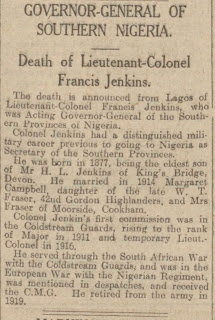 A newspaper article on the death of Francis Jenkins. (Photo: Kurt Gänzl Archive)

After her husband’s death, Margaret seems to have shared a home with her widowed sister, Helen (d 1966) with whom she can be seen in the 1939 census.

Okay. The scandalous bit. According to the family historians (never to be totally trusted) father Fraser had nine children. Maybe. By Kate? Undoubtedly not all of them. Because I have encounted little Willie Fraser before. In my D’Oyly Carte delvings … Rita Presano (née Tacagni): “In her D’Oyly Carte days she had got mixed up with a ‘swell’ – a heavily married father of several – named William Thomas Fraser. This is he. 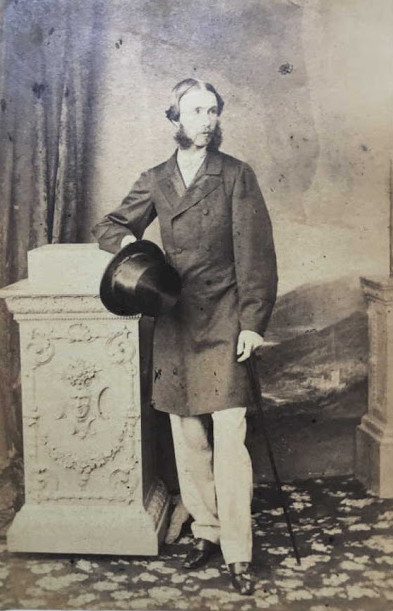 The result was a small Rita (7 November 1884). The baby was taken on by a couple named Robbins, Fraser’s wife (Kate) divorced him, he went on to other ladies, and Rita sr remained single. Officially. I see in the 1901 census she is the ‘wife’ of Scots violinist and conductor Alfred Ernest Print. They officially wed in 1924. Maybe he was previously ‘spoken for’. There were no children.

What a wally. Can the Black Watch not do better?

Well, lovely Margaret did better. Nearly two decades as a stage glamour girl and an almost-actress. And I reckon she kept that little note from her Gaiety days and Ivan Caryll …  until 1972. Soon after which it fell into the hands of Gänzl, K. Who has preserved it for forty plus years before handing it on to the next generation.