On 24 August 1932 the newspaper Berliner Börsen-Courier reported that “this morning the well known revue poet Marcellus Schiffer was found poisoned and dead in his apartment on Rüdesheimer Platz.” His last hit had been Rufen Sie Herrn Plim! in February 1932, a “Kabarettoper” written with composer Mischa Spoliansky. A year earlier, the two had created the “Burleske” Alles Schwindel, which was revived with spectacular success by Gorki Theater Berlin in December 2017. Now, one of Schiffer’s last works has been brought back to the stage, too: Das Haus dazwischen, a “Volksstück” co-written with Felix Joachimson and with music by Spoliansky. It originally premiered on 21 December 1932 at Komödienhaus Berlin. It had been forgotten ever since. 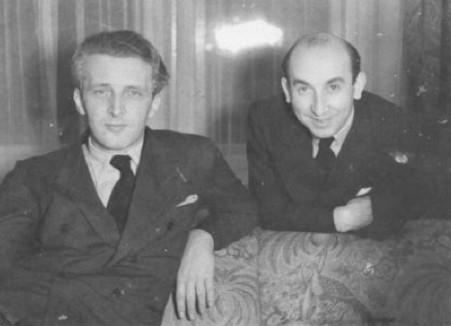 A Spoliansky revival has been underway for more than 20 years now. In 1998 the Akademie der Künste released a double disc with historic recordings of his music, recordings that had come to the AdK archive with the rest of the Spoliansky estate. That same year, the label KLEINaberKUNST released a double disc as well, with additional Spoliansky treasures that include him playing the piano in Gershwin’s Rhapsody in Blue and anti-Nazi propaganda songs from BBC wartime broadcasts. (Spoliansky fled to the UK after 1933 where he had a second successful career as a composer.) 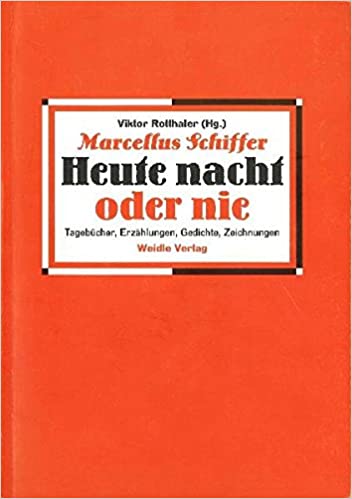 In that book we learn that Schiffer was busy adapting various classic operettas, parallel to writing new ones that combine that unique black humor of his with a biting analysis of Weimar Republic morals. So, in 1929 Schiffer re-wrote Die Fledermaus for Max Reinhardt (Korngold re-arranged the music), Schiffer polished up Offenbach’s Pariser Leben also in 1929, in 1931 he had a go at Sidney Jones’ Die Geisha. All of these “Bearbeitungen” have not been played in recent years, even though they would offer a chance to look at familiar repertoire through the quick-witted eyes of this great satiric writer who was married to his soul mate Margo Lion – for whom he wrote some of his most famous songs and chansons. And of course the world-famous trio “Wenn die beste Freundin” which Lion premiered and recorded with Marlene Dietrich and Oskar Karlweis.

Schiffer’s late – and posthumous – “Volksstück” Das Haus dazwischen deals with a topic that was “in the air” back then, and that is amazingly topical again today: people being driven out of their homes and houses by big corporations who want to re-build Berlin and make a massive profit. In this case, the story revolves about the old clock maker Peter Knorr who lives in a little workshop between two giant new houses. The investors of these houses want to buy “the house in-between” to expand their property. But Knorr refuses to sell. Which drives the trio of investors to distraction, while Knorr’s employees urge him to take the money and retire. They eventually desert him and sign contracts with the big corporation. Until, finally Knorr puts his signature under a very lucrative offer – that ruins the big corporation, which didn’t think he’d ever sign. As a result, he buys their property with his new money and starts a new “bigger” company. A typical utopian Schiffer twist. 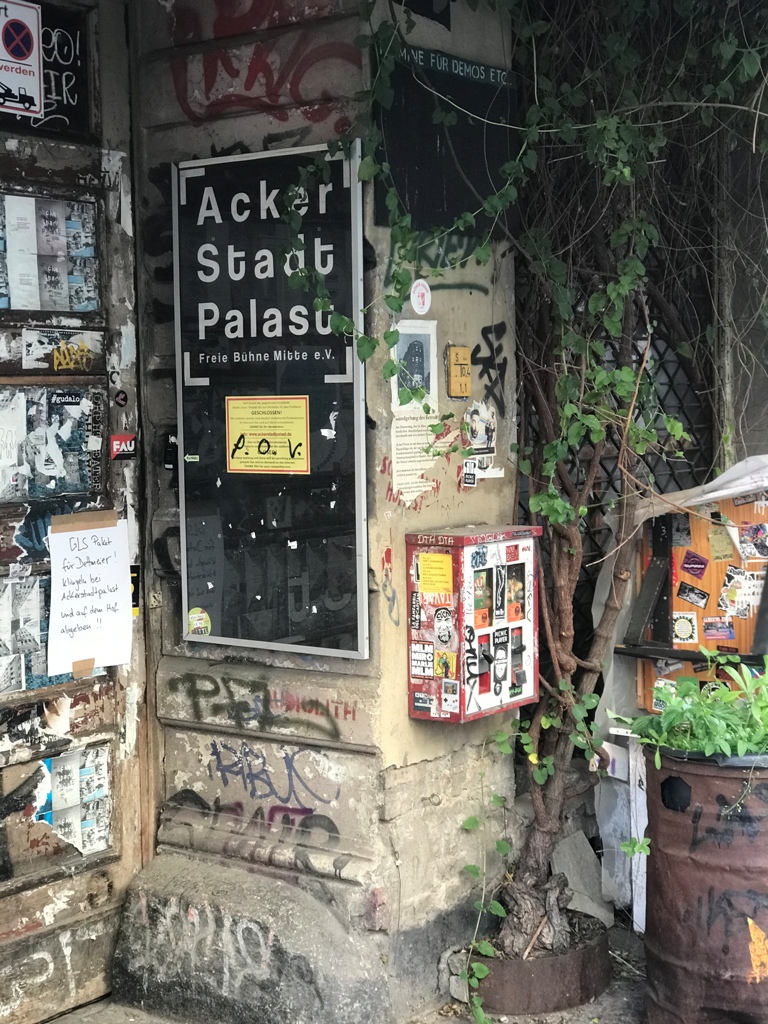 The entrance to Acker Stadt Palast in Berlin-Mitte. (Photo: Private)

It’s understandable that two small musical theater collectives in Berlin (among them tutti d*amore, specialized in “contemporary oper*ette” and queering the genre) wanted to turn this story into a “musical theater demonstration against the gentrification of alternative living spaces” as they phrased it in a public statement. Artistic director and stage director Anna Weber, together with dramaturg Ana Edroso Stroebe, changed the plot and turned Knorr into a theater manager whose little venue is threatened by two massive building complexes left and right that take the sun away from him. And kill artistic flourishing to make room for office space instead. It’s the story of present-day Berlin, and not surprisingly Berlin’s left-wing Senator for Culture, Klaus Lederer, subsidized the project with a story so close to Die Linke’s political agenda.

The location chosen for performing Das Haus dazwischen in 2021 is Acker Stadt Palast in Mitte, a picturesque backyard venue very much affected by the change in the German capital: the old buildings used by squatters and first-wave “New Berliners” after 1989 are slowly turned into luxury apartments, forcing out the artistically minded groups that had operated there at low rent for years. It’s a phenomenon not unique to Berlin, you’ll recall similar developments in New York or Paris where the off-scene in Greenwich Village or Harlem was also forced to move elsewhere. Which can mark the beginning of a new era, but also the end of an old one. 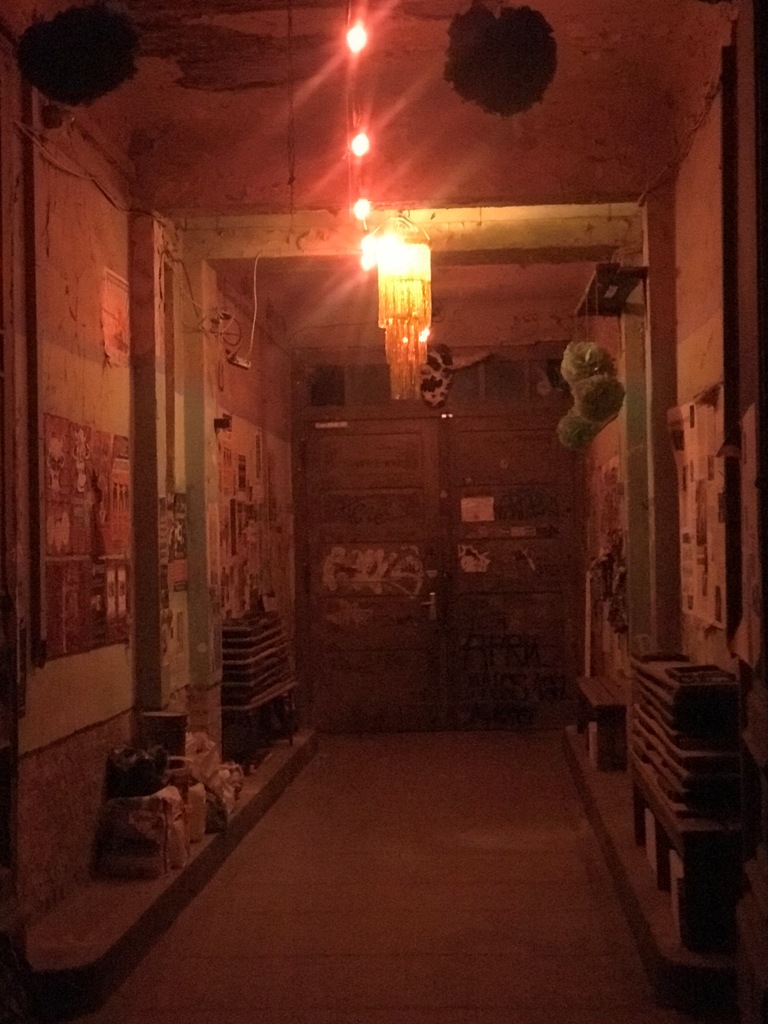 Behind the entrace door of Acker Stadt Palast in Berlin-Mitte. (Photo: Private)

Acker Stadt Palast is certainly a “relic” of the rough and ready atmosphere of Berlin after the fall of the wall in 1989 which is not likely to remain where it is – as it is – for much longer. Changing the story of Das Haus dazwischen to reflect exactly that development might seem a little straight forward and simple, as if a modern audience couldn’t put one and one together and understand what the original “Volksstück” has to do with today.

But, to my own surprise, the production works well in the updated version. It’s played in a black room where people are seated with Corona distancing on the side, while the six actors in “Expressionist” pink and grey costumes (with a slight futuristic touch) act out the story with minimal props on a bare stage. 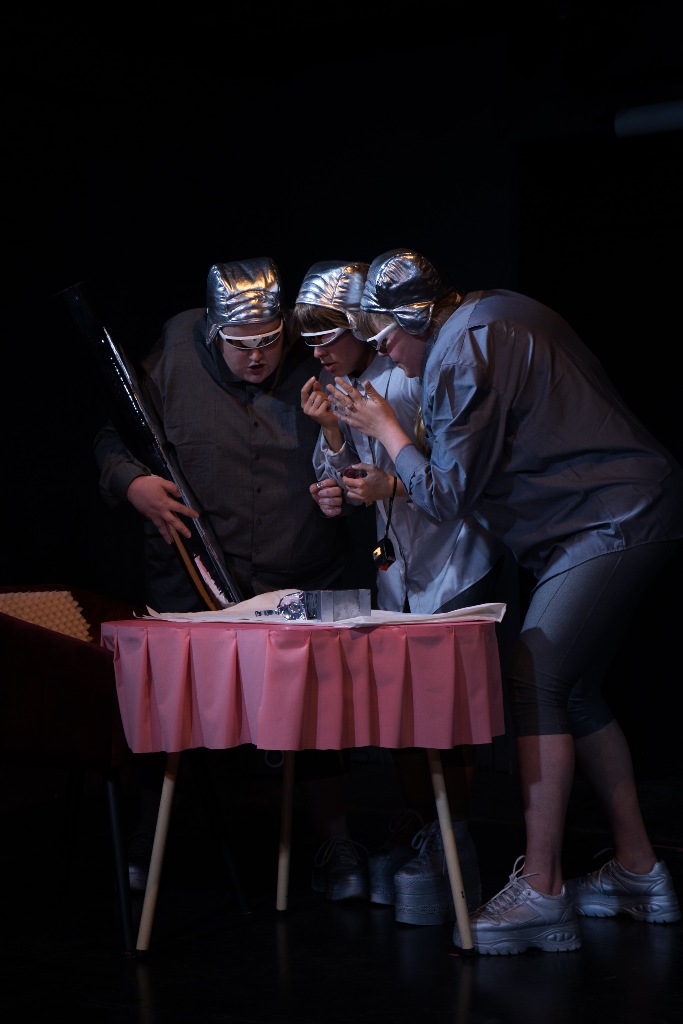 This works because the songs work so well, and the lyrics by Schiffer/Joachimson are so incredibly timeless, e.g. when the authors say “Vielleicht gewöhnt man sich mit der Zeit an die Zeit”… maybe we’ll get used to the new times with time. Especially after a year of Corona and lockdowns the poignancy of these lyrics is spooky.

The production also works because the actors perform with incredible verve, which is a joy to watch. The three investors Atlas, Stichel and Kubus are played like a crazed Andrews Sisters trio by Gina May Walter, Janneke Dupré and Ekaterina Bazhanova – with deliberate US-American accents (because obviously all capitalists are American? Not Chinese? Not from Saudi Arabia? Or from anywhere else, like Germany itself?). The trio’s repeated ensemble number “Wir beraten zu neuen Taten…. Bum-bum-la-la-bum-bum” (“We hold conferences and advise…. La-la-bum-bum”) is hilarious, and the way they perform it here is even more hilarious. Thank God they repeat it many times over. Having the “evil” investors turned into a trio of ridiculous female power managers is an interesting gender twist. And the twisting continues: Knorr’s partner Mathilde is played cross-dressed by Ferdinand Keller who is truly thrilling to watch, walking that fine line between ridiculous and deeply touching, singing in falsetto but never turning Mathilde into a laughing stock figure.

Then there’s the prima donna of the troupe, Caroline Schnitzer as Barbara. She – as the only one here – manages to capture that hard-to-pin-down 1920s style of dry humor, perfect reserved posture and grand aura. She reminded me of Margo Lion throughout, and she delivers her feminist solo “Ich kann so zärtlich sein (aber nur wenn ich will)” (“I can be so tender – but only when I want to be”) with a Rossini-type melody and understatement that is the essence of Weimar Republic musical theater. It’s a wonder she hasn’t been snatched up by companies such as Komische Oper or Gorki Theater for this type of show. Barbara has a love affair in Das Haus dazwischen with one of the investors, Willi (Kubus), played cross-dressed by the aforementioned Ekaterina Bazhanova. This constant gender bending on all levels of the production works really well, and it makes the consciously old-fashioned “Volksstück” seem anything but old-fashioned. 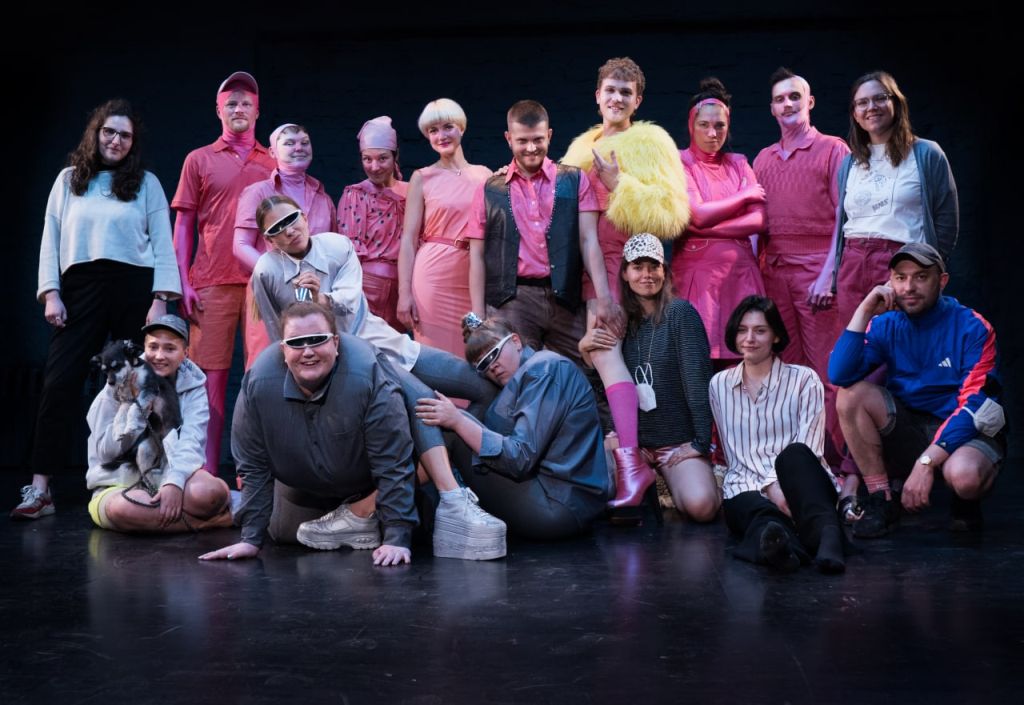 The entire “Das Haus dazwischen” team with the musicians also in costume, Caroline Schnitzer is in the back row, 5th from left. (Photo: Cornelius Reitmayr)

One should not forget to mention that the success of the entire enterprise here also depends on the brilliant little band that makes the 1932 score take flight: above all Viktor Wolf playing the clarinet and saxophone ensures a jazzy quality that made me think of Gershwin again and again. He partners up with Franka Herwig at the accordion, Marta Loley at the bass, Henning Wölk at the piano and Evi Filippou playing the drums. She makes sure that these drums highlight the turning points of the plot, but she never overpowers proceedings with a permanent rhythm that distracts. Brava!

Which leaves Ludwig Obst as Mr. Knorr. He signs the character part with a glorious tenor voice, he brings great intensity to the role and he has a marvelous dream sequence with his old friend Kuno from childhood times (played by Ferdinand Keller). They talk about their lives 40 years ago, and during the performance there are repeated references to Knorr having run his to-be-knocked-down theater for 26 years. Which means: Mr. Obst is simply too young to be believable as the “old man” who defends his right to be where he is. Of course you could take that as a statement about the current artistic scene protesting against gentrification… because it was them moving into neighborhoods in Mitte, Wedding, Kreuzberg, and Neukölln that made these former working class areas so hip and desirable for investors. That they – the hipsters – in effect drove away the working class families that had lived there before, at low rent, is an irony when the same hipsters now lament that they’re beening driven out, even if they’ve “only” been there for a very short time. Is that the statement stage director Anna Weber wants to make with Ludwig Obst as Knorr? It’s one way of looking at this Haus dazwischen.

There were three performances in Berlin now. I can only hope that that wasn’t it. The small scale production can easily be put on anywhere: indoors, outdoors, in a foyer, factory hall…. So I pray that this little jewel of a rediscovery will not disappear again for 90 years. Admittedly, it doesn’t contain any of the well-known Spoliansky songs, but the score works marvelously well and is totally in the style of the other better known pieces. Which makes is absolutely worthwhile to listen to it. 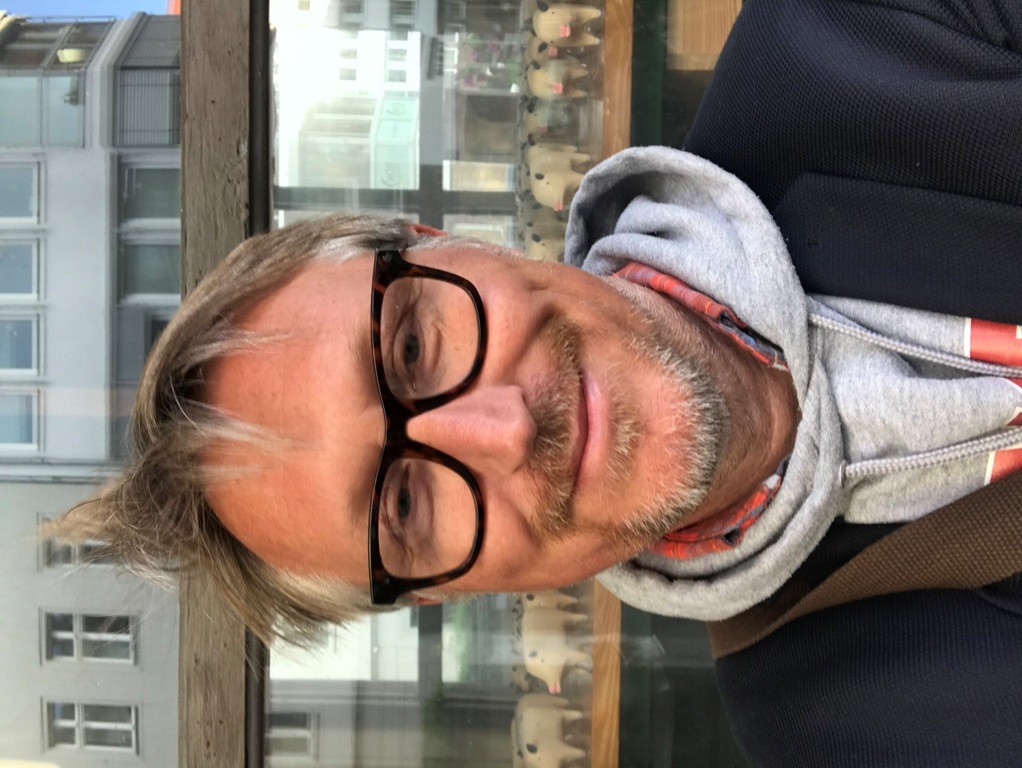 The author of this article in front of Acker Stadt Palast, before the performance. (Photo: Private)

For me, after Wie werde ich reich und glücklich at the opera house in Weimar, Alles Schwindel at Gorki, and various revues (such as Heute nacht oder nie at Komische Oper), this new encounter with Spoliansky’s musical theater confirms that his complete shows work better that putting together individual songs. And that these shows are very worth digging up, even if they are stylistically difficult to pull off because there are few Marlene Dietrichs and Margo Lions (or Oskar Karlweis’) around today. But this off-beat Das Haus dazwischen reminded me that there are enough young performers today who can translate the required style with the artistic means and sensibilities of 2021. And that’s good news, all around!