The musical comedies of Mischa Spoliansky have been experiencing quite a revival in recent years – probably because the biting sarcasm of their texts and the grotesque presentation of everday problems of “ordinary” people speak to us (again) today, in times of economic crisis, terror, and refugees. Various of Spoliansky’s small scale chamber operettas have been successfully staged all over Germany recently, among them Rufen Sie Herrn Plim and Wie werde ich reich und glücklich. Now, the Komische Oper Berlin joins the revival efforts, somewhat late in the process, and offers a newly written “best of” Spoliansky review entitled Heute Nacht oder nie, with new musical arrangements by Kai Tietje. And with the Geschwister Pfister as the star attraction! 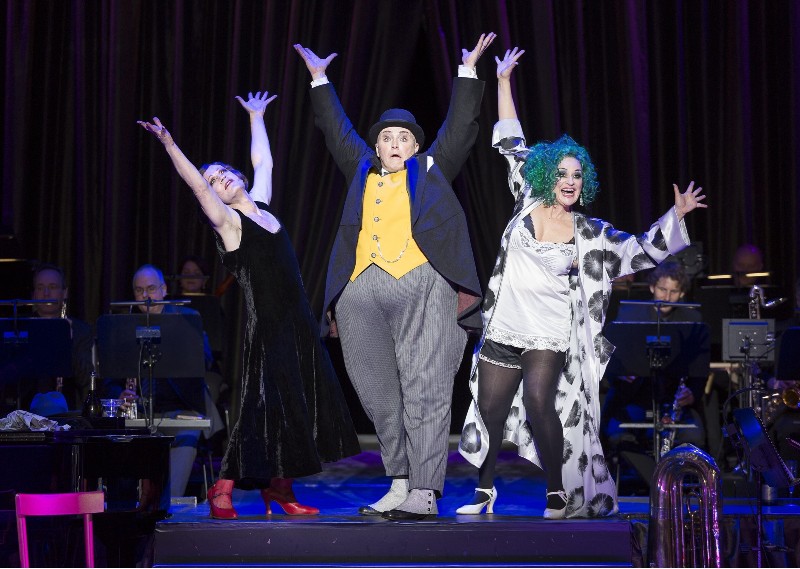 The idea of this new show – which has been put together by director Stefan Huber, Tietje, and dramaturg Johanna Wall – is to present a slice of 1920s life in Berlin: we see a selection of “typical” characters we might know from Otto Dix or Georg Grosz paintings, or from the movie Cabaret. There is the morphium addicted lesbian (Christoph Marti), a whore with a big human heart (Andreja Schneider), one of those überfatt business managers (Tobias Bonn), a suppressed Everyman with glasses and a desire to break free (Stefan Kurt). Also, there are two young lovers representing the more high-brow and “sane” side of Berlin, Mirka Wagner as “Das Fräulein” and Johannes Dunz as “Der Provinzler”.

On a mostly bare black stage they present 21 Spoliansky songs, starting with “Es liegt in der Luft” to the final “Heute Nacht oder nie” – sung to perfection and with soaring tenor top notes by Mr. Dunz. Along the way, there are some wonderful scenes with Mr. Marti dancing a spooky morphium tango, which is so detailed and well calculated, that I’d call it one of the absolute (!) acting highlights in the current Komische Oper season. And Miss Schneider sings the “Nuttenlied” from Alles Schwindel in an equally dazzling way – as a perfect “type”. 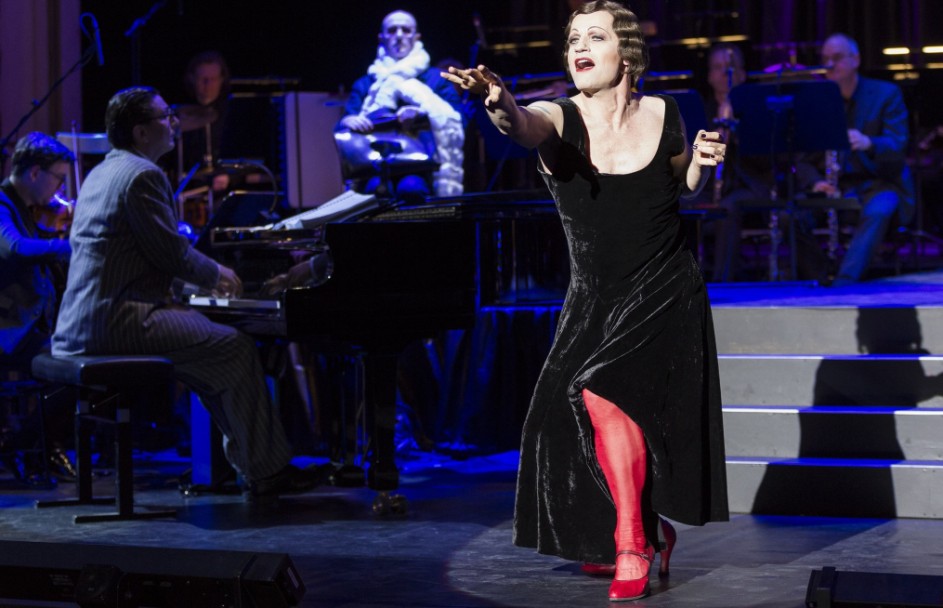 Still, the evening did not entirely grip me. I wondered for a long time, why? There is hardly any dialogue or text between the musical numbers. As a result, there is little context and absolutely no direct reference to what life in Berlin in the Twenties was like. There is also no context (ironic or otherwise) for the musical numbers. They are left standing for themselves. Compared with Wie werde ich reich und glücklich in Weimar, I found the music to be more effective with dialogue surrounding it. Because often Spoliansky’s compositions grow directly out of the scene, comment on the scene, turn the scene upside down in an absurd way. If you cut the scene, and focus just on the song, you lose much of the glorious effect this music can make.

Reduced to a string of “famous” solos, the songs don’t compare positively to the more famous solo songs by Kurt Weill or Friedrich Holländer. (Or even Ralph Benatzky and Rudolf Nelson.)

After the no-intervla-90-minutes at the Komische Oper I did not walk about thinking. “Wow, Spoliansky really is a superb artist!” Which is something I did think after the performance in Weimar, which was a Christian Weise production and opted for much more “extreme” story telling than Stefan Huber did in Berlin. Weise also emphasized the Twenties in their dark madness and despair stronger than Huber. I found that more gripping. It also made me experience the genius of Spolinasky more clearly. (Weise’s equally thrilling Othello can be seen in Berlin at the Maxim Gorki Theater right now, just across the road from the Komische Oper.)

Still, the new Berlin staging brought Spoliansky before a larger audience, and also before many critics who have not traveled to Erfurt (Plim) or Weimar (Reich und glücklich) or elsewhere to see the full shows. Many of the critics responded very positively to the show at the Komische Oper, but many also did not particularly praise Spoliansky’s music – but instead the star performances of the three Pfisters. 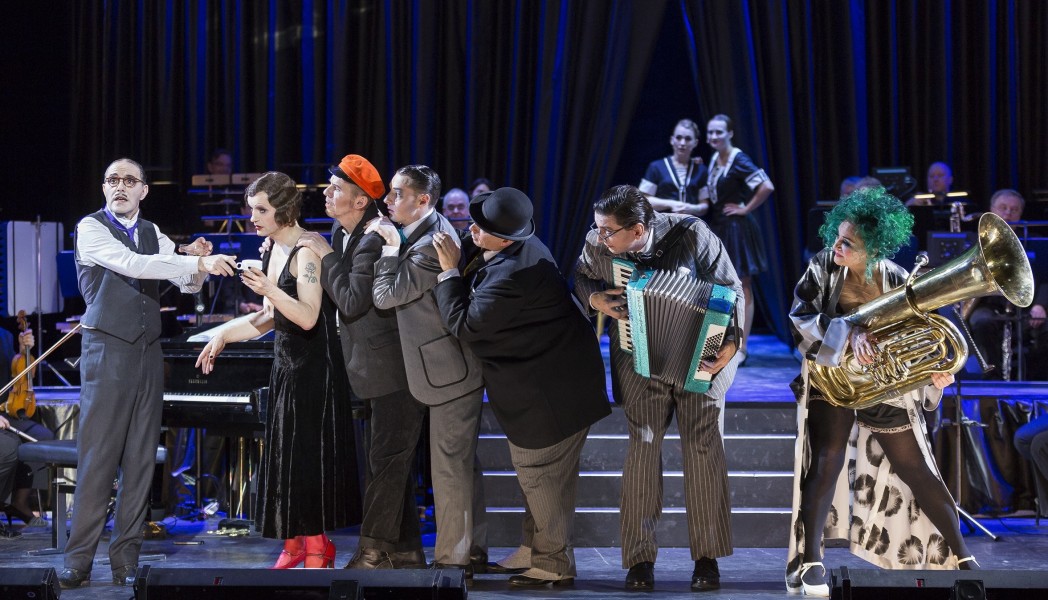 Maybe one cannot have it all, all the time? As a Pfister show, this Heute Nacht oder nie is an absolute must-see. Christoph Marti as the crazed lesbian offers a breathtaking performance of great nuance and visual refinement. In terms of stand-out performances, Stefan Kurt is another must-see. And the two young lovers, Wagner and Dunz, offer some of the loveliest musical moments of the evening. They blend in well, with their operatic voices, with the actors and cabaret singers. And the mix of vocal styles has enormous charm.

The music offered ranges from the 1920s to the 1940s, all of it has been newly arranged by Kai Tietje in a lush swing style closer to Hollywood and Broadway than Spoliansky’s Weimar Republic original sound. There is less bite, and more bitter-sweetness.

As an experiment, this is a fun show to see. And there are many outstanding performances to admire. As a Spoliansky revival, this is not the big bang that other revival projects at the Komische Oper have been. For some strange reason there are only four performances this season, two in April, and two in the summer. The next one is already completely (!) sold out.

Let’s hope there will be more, not just because Spoliansky + Geschwister Pfister sells. But because it would be interesting to see a full Spoliansky stage work in Berlin. And then discuss the merits of his genius again.

By the way, the Semper Oper in Dresden will present Spoliansky’s Alles Schwindel (where the “Nuttenlied” mentioned above comes from) in January 2017. So the revival continues…. all over Germany.