When the ambitious young soprano of the famed Bostonians company, Alice Nielsen, decided to break away from the group and start up a comic opera company in opposition, she and her producer Frank Perley launched their project with a piece commissioned from Bostonians’ chief suppliers, Harry B Smith and Victor Herbert. It premiere at Wallack’s Theater, New York, on 26 September 1898. 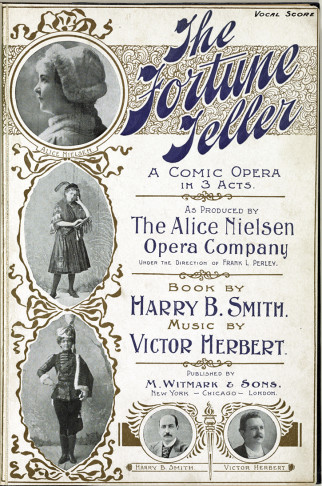 The Fortune Teller of the show’s title was the gipsy maiden Musette (Miss Nielsen), whose amazing resemblance to the wealthy and social but long-lost Irma (also Miss Nielsen) provided what plot there was to the piece, and also enabled the canny manageress to play the two largest rôles in the show. Irma, with a little help from Musette, manages to avoid wedding the unprepossessing Polish pianist Count Berezowski (Joseph W Herbert) in favour of the handsome baritone hussar Ladislas (Frank Rushworth), whilst Musette, once everything is satisfactorily explained, pairs off with her jealous gypsy Sándor (Eugene Cowles). Joseph Cawthorn joined Herbert at the head of the comedy in the rôle of Musette’s father, Richard Golden played the ballet-master of the company where Irma, before becoming un-long-lost is a dancing girl, whilst Marguerite Sylva, as the actress Pompon, picked up the crumbs of the feminine music and also the heroine’s hussar brother, Fedor (whom Irma, for a while, impersonates to ensure her safety from the Pole).

Four of the evening’s eight solo songs (in a 16-piece score) fell to the prima donna. She began with the school-girlish `Always Do As People Say You Should’ (Irma), switched to csárdás-rhythm for the more tempestuous praises of `Romany Life’ (Musette), waxed Irish, Spanish, Chinese, French and finally indulged in a coon song in the sequence `Serenades of All Nations’ whilst still in the character of the gipsy girl, then shifted back to more conventional waltz-time to finish off her multi-coloured evening. Ladislas sang in praise of `Hungaria’s Hussars’ and joined Pompon in the waltz duo `Only in the Play’, but it was Cowles who scored the biggest hit of the evening — and of his career — with his basso rendition of the `Gypsy Love Song’ (`Slumber on, my little gypsy sweetheart’). 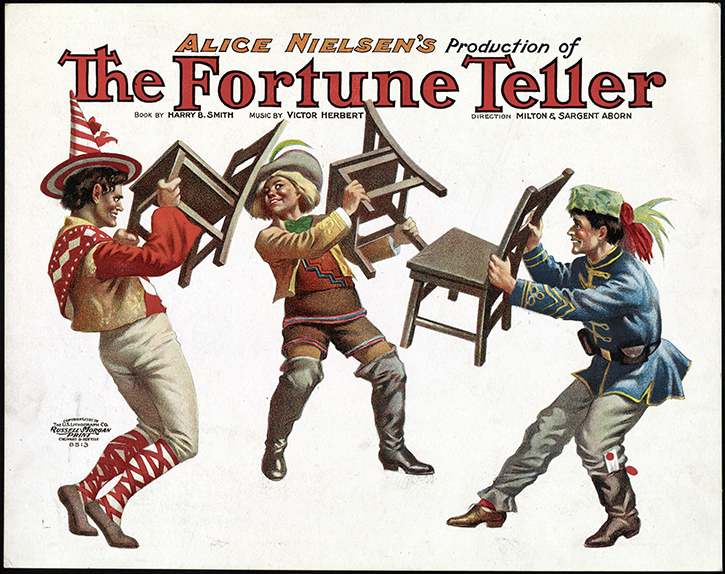 Hungarians dancing in “The Fortune Teller.”

Built to travel, The Fortune Teller did not compile a long Broadway run. Following its Toronto baptism (14 September) and a week in Buffalo, it played just five weeks in New York before Miss Nielsen moved on to her next date, but there was no doubt as to its success, and its manageress-star kept the show on the road in repertoire even when she had a newer piece to play. In 1901, when she joined the rush of American companies to Britain in the wake of the success of The Belle of New York, it was The Fortune Teller which Nielsen chose to present, with Cowles (who now had an extra song, ‘I Sing in Praise of the Sword’), Cawthorn, Herbert and Rushworth all in their original rôles and Viola Gillette as Pompon.

If notices for the piece were mixed, Miss Nielsen and, in particular, Cowles were much liked and the show stayed at London’s Shaftesbury Theatre for 88 performances.

In 1903 The Fortune Teller was seen in Australia when George Musgrove, formerly of the Shaftesbury Theatre, mounted it with Madame Slapoffski (née Lillian Williams) in the title-rôle alongside W R Shirley (Berezowski), Lemprière Pringle (Sándor) and May Beatty (Pompon) at the Sydney Theatre Royal, the Princess, Melbourne (28 February 1903) and the Theatre Royal, Adelaide (2 May 1903).

The Fortune Teller returned briefly to Broadway when it was remounted by the Shuberts in their series of revivals of classic pieces at the Jolson Theater in 1929 (4 November). Much later, a heavily adapted version, with bits of the score combined with some music from Herbert’s earlier The Serenade, was produced on the West Coast as Gypsy Lady and subsequently seen, without success, in New York (Century Theater, 17 September 1946) and, under the title Romany Love (His Majesty’s Theatre 7 March 1947), in London.

Bits of the score (though not the lyrics) also turned up in a 1934 Warner Brothers film based on the show in which Anita Campillo played the heroine’s double rôle.