Any solo album that starts off by knocking you on the head with the boisterous couplet of the animal trainer “Je suis du pays vermeil” from Offenbach’s Boule de neige (1871) has my immediate attention and gets two thumbs up for daring to be adventurous. Something far too few Offenbach recording projects are. And this project called Offenbach Colorature by soprano Jodie Devos, Münchner Rundfunkorchester, and conductor Laurent Campellone is certainly adventurous in its choice of 16 titles, steering clear of the usual favorites. (Okay, that doesn’t apply to the two Tales of Hoffmann numbers, but let’s not quibble.) So it’s especially nice to note that this album, released by the somewhat unknown label Alpha (“Outthere Music”), won the prize for “Best Solo Album” at the first Oper! Awards last week-end in Berlin. 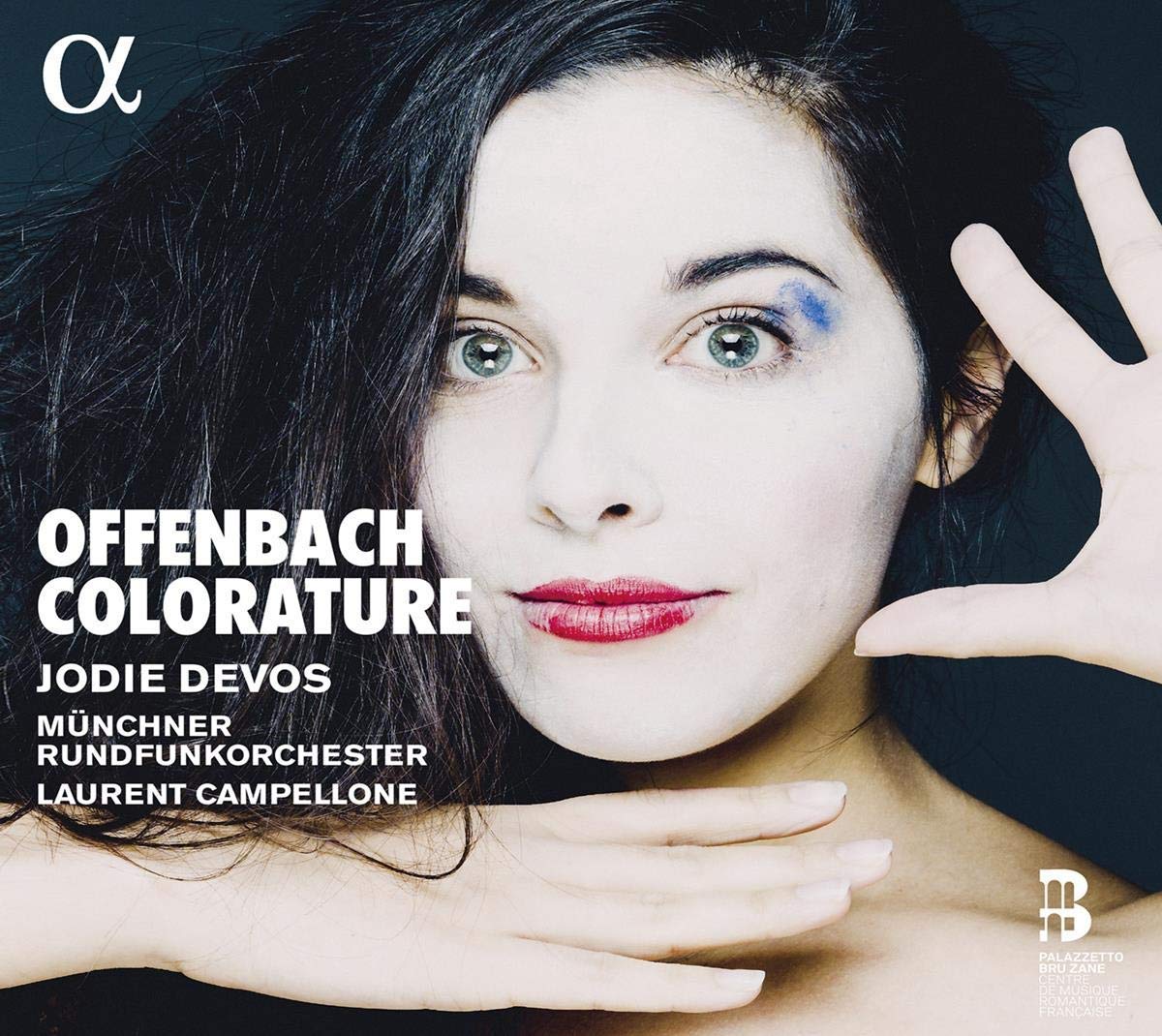 This prize was initiated by the German magazine Oper!, establishing itself as young competition to the outworn Opernwelt magazine which also hands out such annual prizes, but not in combination with a splashy gala at Konzerthaus Berlin. That’s where the winners of the various categories were announced. And Offenbach made his way onto the list twice. (More on that in a sec.)

The album by French soprano Jodie Devos offers so much glorious music that you wonder why so much of it hasn’t been recorded before, or not recently. You get Boule de neige three times, the other numbers being the Romance des souvenirs of Olga “Souvenance” and Olga’s chanson “Allons, couches.”

Add to that more coloratura joys such as the Romance des Fleurs from Le Roi Carotte (“Le viola c’est bien lui”) or Ciboulette’s bravura rondo from Mesdames de la halle (“Quel bruit et qel tapage”). Miss Devos might not have the highly individual timbre of Mady Mesplé who sings this number on the 1982 EMI recording, but I personally find her bright, clear, and charming voice much more fun to listen to – there’s a constant smile in her singing and a wonderful playfulness with the words that you do not get with Mesplé.

Here, as elsewhere, the voice of Miss Devos is well focused and easily produced. The few strains at the extreme top actually make it more exciting to listen to the vocal acrobatics, because they guarantee a certain dangerous edge. At the same time there is an irresistible effortlessness in the rest of the singing that is highly appealing. Offenbach’s music needs such a smile – and it needs more than just beautiful singing. It needs personality and someone who is not afraid to go over the top, who dares to be extreme.

Miss Devos doesn’t truly go over the top here, which is a pity, because I’m sure she could easily do it and free herself from ‘classic’ conventions, sing more from the text and act with the words as an equal partner to the music. Maybe a conductor such as Adam Benzwi could get her to do this. That said, the conducting by Laurent Campellone has a great freshness too, a freshness I missed in the Opera Rara releases of Vert-Vert (2010) and Robinson Crusoe (1980), and even in Manuel Rosenthal (on the 1982 EMI triple bill Pomme d’Api/ Monsieur Choufleuri/ Mesdames de la halle).

I truly hope these Munich forces will get more chances to explore Offenbach in the future and take matters to the next level. They sound much more convincing playing opéra bouffe and opéra comique here than they do under Ulf Schirmer doing “operetta” in the most overblown operatic way.

Among my other personal favorites on the album are the Air d’Ines from Les Bavards (“Ce sont détranges personages”), Eurydice’s Invocation of Death from Orphée (“La mort m’apparaît souriante”), and the final bolero “Je suis nerveuse” from Le voyage dans la lune. Here, Miss Devos actually dares to be “dirty” in her singing for brief moments, and it’s fabulous. Please, let’s have more of this!

For those who need something familiar, there is Olympia’s “Les oiseaux dans la charmille” and the Barcarole from Hoffmann (with Adèle Charvet). And as an extra, there is the overture to Les bergers (1865) right in the middle of everything, like an orchestral interlude.

The other winning Offenbach at Oper! Awards was Barkouf (1860) as “Best Rediscovery” in the production by Opéra national du Rhin Strasbourg. This opéra comique absolutely deserves a recording, too, maybe not from Strasbourg but with the Munich orchestra. It seems that in the right hands, such as those of Laurent Campellone, the Münchner Rundfunkorchester can create “operetta magic.” (And I think one can count Offenbach in that category; as Norma Desmond said: “I am big. It’s the pictures that go small!” And Offenbach is the founder of operetta, no matter what became of the genre later.)

The mere fact that Offenbach pops up twice – and with unusual titles – in the awards list of 2019 is a sign that things are changing; one change is that the traditional awards by Opernwelt have really run dry and have outlived themselves, celebrating the same stuff year in year out, leaving hardly any room for innovation.

So, make way for Offenbach, Boule de neige and all the other forgotten works, and make way for Miss Devos and more artists like her. Let’s consider this a fresh start. And above all, congratulations on the prizes!

For the great and complete essay by the late Patrick O’Connor on Vert-Vert, published in the booklet of the Opera Rara recording in an abridged version, click here.