No, it’s not exactly news that there are – and always have been – multiple audiences for operetta. And they want different things. If you read Emily Soldene’s autobiography, you’ll find a chapter on Hortense Schneider appearing in London in 1870 as the Grand-Duchess of Gerolstein: “Crowded stalls and the rest of the house all but empty, speak better than any word of ours the relative opinions of the upper and middle classes on the subject of decency.” What is she referring to? “It is quite clear that the middle classes are jealous of hurting the modesty of their wives and daughters,” writes Soldene, “and it seems equally certain that in aristocratic circles these delicate little attentions are not so much considered.” While the one group wanted ‘family friendly’ entertainment and went to Gilbert & Sullivan instead, the other group wanted as much ‘indecency’ as possible and flocked to see Mdlle Schneider and Offenbach. It’s like going to a multiplex cinema today: there are lots of different movies for lots of different target groups. In operetta, of late, there has been a new opening-up with regard to target groups: instead of playing the genre only for the elderly looking for nostalgia and problem-free entertainment, there are now all sorts of groups who are discovering the genre for different reasons. You can witness this, as if under a microscope, in Berlin. While Gorki Theater is drawing in a hip and politically minded crowd with satirical Spoliansky shows (Alles Schwindel) and the Komische Oper is offering Weimar Republic syncopations as irresistible Glitter and Doom spectacles (Ball im Savoy, Perlen der Cleopatra et al), the Tipi am Kanzleramt is offering Seventies retro glitz with Frau Luna, while the Neuköllner Oper presents rough-and-dirty trash (with a recent Fledermaus). And now, the big Deutsche Oper Berlin is joining the party with their own Fledermaus – the first production of that Strauss show at Bismarckstrasse since Otto Schenk’s version was taken out of repertoire in 1992. Attending a regular Tuesday evening performance this week was quite a surprise in terms of who you meet. 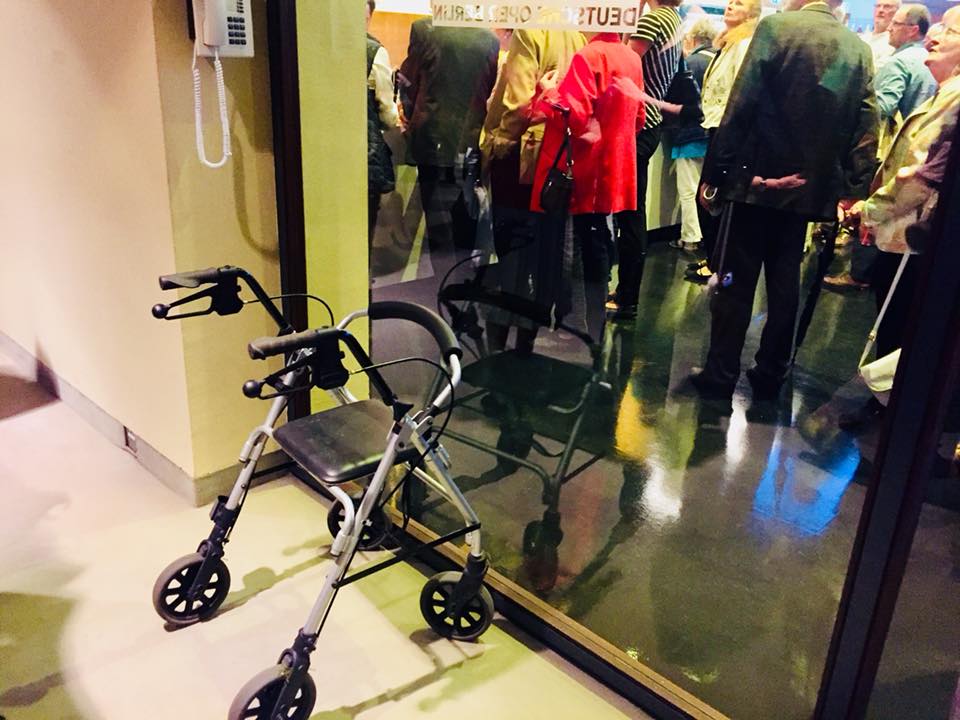 The audience before the start of “Fledermaus” at Deutsche Oper Berlin, 2018. (Photo: Manuel Brug)

The first thing you’ll notice, as you walk towards the entrance on a spring evening, is the crowd. The place is packed with people standing outside, drinking in the evening sun. That’s not always to case at this house which has successfully scared off many regulars with a string of ‘modern’ productions under artistic director Dietmar Schwarz. But now they are all back, it seems, to see Die Fledermaus. While other big houses in the city have triumphed by resurrecting forgotten and unknown titles, the DOB plays it safe with this beloved standard. For which they’ve hired famed star tenor Rolando Villazon as stage director. Plus soprano Annette Dasch as Rosalinde. The company’s music director, Donald Runnicles, conducts, signaling to the world: “This is Chefsache, a job for the big boss himself!” (Instead of the usual Wagner and Richard Strauss he does.)

Villazon had an interesting idea for his Fledermaus: in order to show how timeless this tale of infidelity is he has set every act in a different era. The first act plays in a 1870s living room, the second act in an East-Berlin communist party cellar during the Soviet occupation, probably in the 1950s. And the third act is set in a space ship, with Frosch as a robot and with some alien monsters pushing their pink tentacles through prison doors.

While I found this a fascinating basic concept, the execution wasn’t quite so fascinating. Because it’s not really clear how and why these characters move forward in time. And having the interval in the middle of act 2 (after the czardas) means that the three-part time structure is ruined, sort of. Also, if you are going to set act 2 in a communist ambience and turn Prince Orlofsky (Angela Brower) into a Soviet general (a bit like in the movie Oh, Rosalinda!) then it’s ludicrous to still address him as “Prince” and have him talk about his “millions” that are his doom. Even with minimal knowledge of Russian history you’d be aware that the aristocracy was overthrown by the revolution and wealth newly distributed. It seems the director didn’t care about such details, just like he gave Rosalinde in act 2 tinted glasses to put on, instead of a mask. It’s doubtful that any husband wouldn’t recognize his wife in such an outfit.

But … I was mostly happy to accept these incongruities and enjoy the time traveling. Until we got to the spaceship. Setting act three in outer space – with Strauss music – could have been inspired by the Stanley Kubrick movie classic 2001: A Space Odyssey in which The Blue Danube waltz makes a memorable appearance. (As does Also sprach Zarathustra by the other Strauss.)

This space station at DOB was nowhere near as stylish or polished as what sci-fi fans are accustomed to. And the costumes for these operetta astronauts were also not on the stylish side. Anyone who recently saw Star Wars, Guardians of the Galaxy or anything of the sort knows that a prison in space offers more potential. (And that includes weird behind-the-scenes monsters.) Add to this a robot (Florian Teichtmeister) with a mostly re-written text that is only moderately funny.

Okay, so I sat there and thought: why not, there are some note-worthy ideas that offer new perspectives. But then, at the very end, we traveled back in time for the finale, with Also sprach Zarathustra. (I guess Mr. Runnicles couldn’t resist that one.) But this flash back to the 1870s was done in such an amateurish way that it was painful to watch. It got even worse, sadly, when the operetta finished and for the applause a Strauss gallop was utilized that did not work well as exit music. (It seems that many in the audience weren’t sure whether the show was over or not, while the soloists already came out to take their bows.)

The reviews for this production were mostly positive, after it premiered on 28 April. The applause this week was mostly friendly, too. And as I said, the house was full. On the one hand, there was a noticeably older audience in some remarkable outfits (and hair styles) that I hadn’t seen since the Eighties. On the other hand, school classes seem to have been dragged to see this. I wondered what they thought of the space ship scenes – or the whole performance. 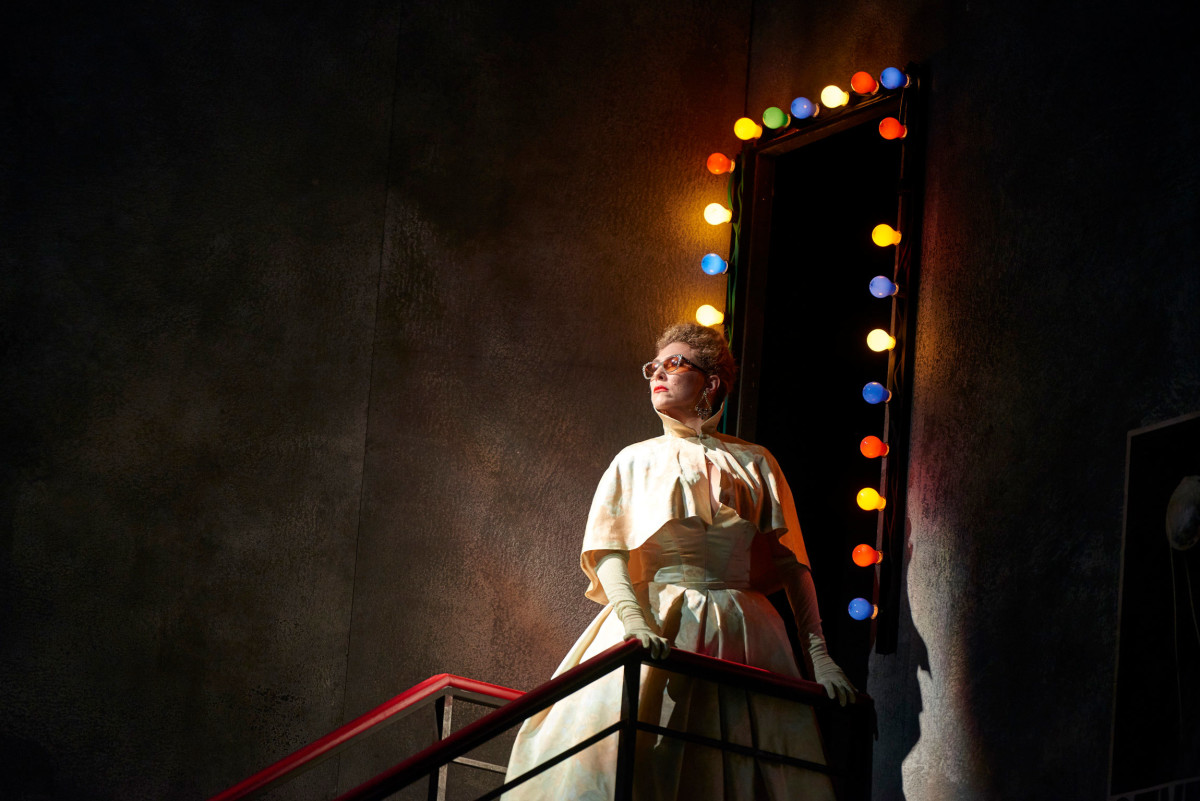 Musically, the evening was as standard and uninspired as the choice of title itself. Mr. Runnicles did not exactly make the Johann Strauss score sparkle in any way. There were various embarrassing moments in the orchestra, with wrong notes, but most disturbing was the general lack of joie de vivre. And the singing was only okay, never brilliant. No stand-out performances, even though everyone was in possession of good voices: Thomas Blondelle (Gabriel von Eisenstein), Enea Scala (Alfred), Adele (Meechot Marrero), Thomas Lehman (Dr. Falke), Markus Brück (Frank), Jörg Schörner (Dr. Blind).

In terms of pure stage presence, Annette Dasch was the center of attention. She sounded okay, much better than the last time I heard her with Mozart at Staatsoper Unter den Linden, but considering how many star sopranos have sung this role, her interpretation cannot compare favorably with any of them. She struggled with her czardas, and some of the other coloratura moments. And in the low parlando bits she was hardly audible. (Always a problem with operetta in a house of this size.) But at least Miss Dasch had charisma. And she used it to lift the production off the ground as best as she could.

Music critic Manuel Brug, who took me with him to see this Fledermaus, posted this comment on Facebook afterwards: “If you want to torture yourself with a first class operetta execution then see Fledermaus at Deutsche Oper! Boring conductor. Senseless, humourless, glamourless, directed by Rolando Villazon. A nightmare with Annette Dasch as horror diva. Average age of public: 110.”

I guess that says it all. Whether you’ll enjoy this staging – which is playing for New Year’s Eve 2018 – depends on whether you feel you belong to this audience group, or not. Luckily, Berlin has a great variety of alternative options right now. And if you’re truly hungry for a good Fledermaus, grab your Karajan or Clemens Krauss recordings. I know they are both problematic because of their political/ideological backgrounds, but at least you can enjoy Hilde Güden or Elisabeth Schwarzkopf as Rosalinde, plus all the rest. These ensembles offer a ‘traditional’ level of artistry that’s absent from this new Berlin production. Just having a famous tenor direct an operetta – but not sing in it – doesn’t guarantee a hit. But it’s obvious that there is an audience for this – and they’ll take a Fledermaus any which way they get it served, as long as they don’t have to go to Neuköllner Oper in ‘dangerous’ Neukölln (and watch the piece set in a Swedish sauna), or to Komische Oper with all the queer things happening there.