The Ohio Light Opera is certainly good for a surprise. Of course, they are renowned for presenting rare shows, unperformed elsewhere, offering surprising discoveries. But in the case of Victor Herbert’s 1906 “Dramatic ‘Pipe’ in Two Puffs” Dream City and the Magic Knight the surprise, for me, was the staging by Steven A. Daigle, first and foremost. He had his youthful cast perform this zany vaudeville-operetta as an over the top burlesque, including the hilarious Wagnerian send-off in act 2 (“The Magic Knight”), demonstrating how much more fun operetta can be when liberated from the standard ball-gowns-and-champagne features and given back its original pull-all-the-stops-out craziness. In short: this production was a triumph and a land-mark for OLO. 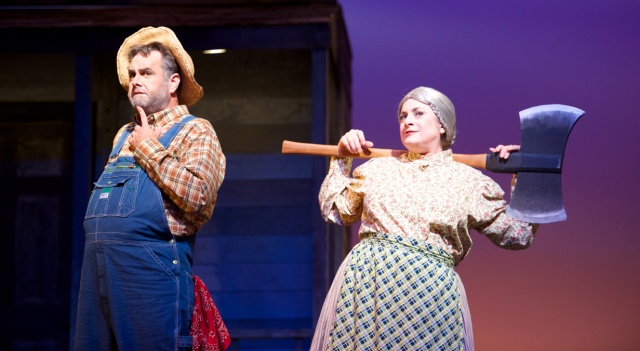 The show traces its genesis, as Michael Miller writes in his program notes, to attempts by the celebrated vaudeville team of Lew Fields and Joe Weber to interest Victor Herbert in writing music for one of their shows. Herbert, with no interest in writing scores for music hall, continually spurned their requests. When the Fields-Weber team broke apart, Weber went out on his own as a producer, claiming that he wanted to create higher-class entertainment. In mid-1906, he executed a contract with Herbert for a comic opera, to be produced in December of that year. Edgar Smith, who had worked for years with Weber and Fields, was engaged to write the book and lyrics, and the show opened on Christmas Day at Weber’s Theatre, without the customary out-of-town tryouts. It was a knock-out success. 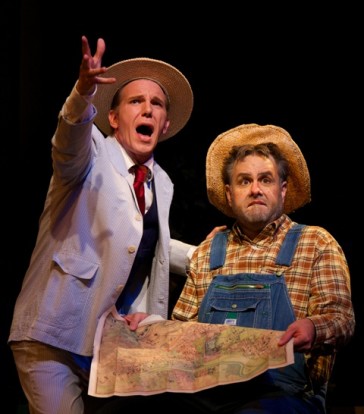 The “Dramatic Pipe” tells a real estate farce. The story takes place on a sweltering summer day in Malaria City, Long Island. Out-of-town folks, equipped with tennis rackets, fishing poles and golf sticks, are “enjoying” their vacation away from the big city – even though the mosquitoes and the heat are killing them. The locals are mostly busy dozing and dancing, waiting for the clam bake as the festive highlight to end the day. On his farm, Mr. Dinglebender (Daniel Neer) – a lazy loafer – is pursued by a real estate smart-ass (Nathan Brian) who wants to buy the farm off him to create a new “Dream City” on the property. He offers Dinglebender a large and tempting sum. As act 1 closes, Dinglebender falls asleep and starts dreaming of how that “Dream City” could look, and how his life would change if he were a rich man. This dream-come-to-life is act two, set in a completely changed Malaria City were the streets are laid out with gold and diamonds, and everyone is exceedingly posh. Especially Mrs. Dinglebender (deliciously funny: Julie Wright Costa) who has undergone an unbelievable transformation.

This new posh life-style doesn’t appeal to the down-to-earth Mr. Dinglebender, certainly not the idea that now – as major of the town – he has to attend the opera, which he hates. He is dragged into the newly built opera house anyway and has to sit through a performance of “The Magic Knight”: 25 minutes of Lohengrin, swans and trumpeters and all. It’s such a horrifying experience, that when he comes out, Dinglebender decides that never-never-never will he sell his farm. He presses an escape button and his dream comes to an abrupt end. Bang! Pow! Boom! He is back on the porch of his farm and tells the real estate broker that he intends to keep things as they are, because there are things more important than wealth, the high life, and dreadful grand opera! 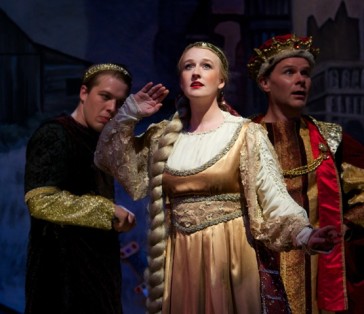 This flimsy plot line offers a large cast many chances to shine with crazy little scenes, and director Daigle has – as a real change from his other productions – animated his singers to play the crazy characters in the crazy little scenes in a highly stylized vaudeville manner that you might remember from old film clips or photographs from the early 20th century. The result is that the young actors, when they don’t have to just stand around and sing “operetta,” but really have to “play” a historic form of theater, truly outclass themselves. They obviously have a fun time playing daffy country folk. Especially Alexa Devlin as Amanda Boggs, the “help” on the Dinglebender farm, brings the house down with her Fanny Brice act. Devlin has the big voice and perfect comic timing to pull this stunt off, and her duet “The Ravenous Rooster” (sung with Andrew Maughan as Hubbs, the village hackman and “oracle of Malaria City”) is a delight from start to finish. 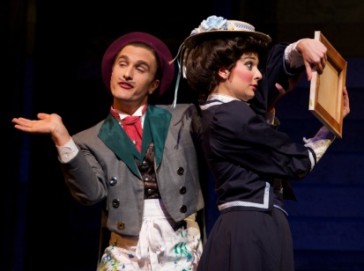 The same can be said of Stephen Faulk who plays a French painter called Henri d’Absinthe (“an artist in search of atmosphere”). He is the love interest of Dinglebender’s daughter Nancy (Natalie Ballenger). His dream is to “paint her landscape with his brush, especially the meadows.” Faulk and Ballenger deliver a performances that can stand up to anything you know from old Hollywood movies set in the vaudeville world. It is amazing to see, today, how well this style of theater still works. 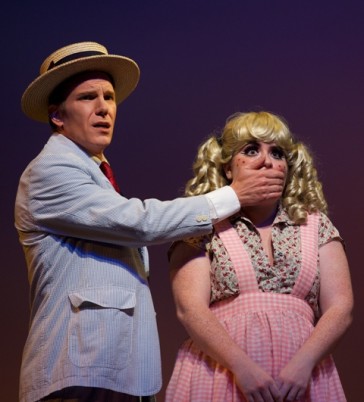 Of course, it helps that Victor Herbert has written a string of bouncy numbers for each and everyone. One hit follows the next, often leading to large dance sequences equally funnily choreographed by Carol Hageman. The small orchestra under the baton of Steven Byess sounds superb delivering the beat to this. (New performance edition by Steven Daigle, additional orchestrations and reconstructions by Steven Byess.)

And then there is that Wagner spectacle. It is probably the best know part of this operetta. (It even has its own Wikipedia entry.) The way it is staged here makes the audience practically fall off their seats with laughter. It’s a romp in which all of the main tunes (and plot elements) from Lohengrin get recycled, mixed with some hefty coloratura singing for Elsa, with a blond wig. Emily Nelson as “a typical grand operatic maiden in the usual distressing predicament” delivers this mad scene with ringing high notes and high camp acting, as does her partner Clark Sturdevant as “Lohengrin, a professional rescuer of distressed maidens.” His entry on a swan is priceless, especially because the two trumpet blowers turn that entrance into the Marx Brothers on speed. 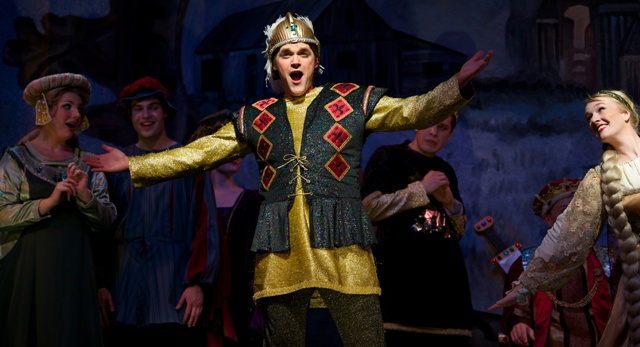 Even though this Victor Herbert show was the most unfamiliar title of this year’s OLO season, the performance I attended on a Thursday was completely sold out. Word of mouth had gotten out that the production is a hit, and people from all over came to see it. The operetta researchers attending the international symposium I, too, attended all agreed that seeing and hearing Dream City (and especially The Magic Knight) was a revelation, surpassing their wildest expectations. They also agreed that this style of operetta performance was much more to the point than some of the other more “standard” productions to be seen this summer, which wanted to take “Light Opera Seriously” (title of the symposium) but lost the flippant fun the genre demands, at least at times.

Since most of the cast member of Dream City are the same I saw in Kalman’s Little King or Gilbert & Sullivan’s Pirates of Penzance, it was refreshing to note that they can all (!) act and dance and be stellar, something you would not necessarily have guessed after seeing the other productions. If I, personally, could wish for anything, it would be to see all of next season’s operettas performed in this broad vaudeville style. Because no one else does it these days, even though it was, once, an essential element of all operetta performances, even in Europe where the star comic duos came from that world, and transported it to the stages of the Theater an der Wien and other famous operetta venues. (Where, for example, Kalman’s Kleiner König was originally premiered.) 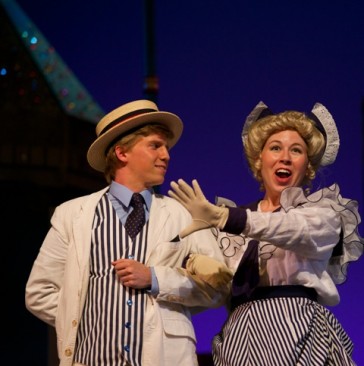 The newly fashionable towns people: Hanna Kurth as Maude (one of the Peck Daughters), and C.J. David as the Village Romeon. (Photo: Matt Dilyard/OLO)

The magnificent production of Dream City and the Magic Knight was recorded, luckily. It will be out on DVD shortly. I would say, it is DVD worth having if the finished product looks anything as colorful and crazy and fun as the live performance did.

So, three cheers to Ohio, their stellar your talents and artistic director Steven Daigle, who in this case made all the right choices and created all the right effects.