Quite simply put, this is the best book on Gilbert & Sullivan that I have come across. Not in a long time, but ever. The American literary scholar Carolyn Williams has published a ground-breaking study entitled “Gender, Genre, Parody” at the Columbia University Press New York. 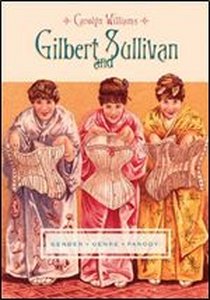 And “gender, genre, parody” are exactly the topics Williams discusses in her richly intellectually way. She starts with a general assessment of G&S’s oeuvre, claiming that all of their shows are intended as a parody of the then current opera fashions. Her argument is: “Parody is both mimetic and critical. It comes in all tonalities, from affectionate to scathing, but it always looks (or sounds) like what it criticizes.” While such a parodic approach is very modern (“Parody takes a knowing, present-day perspective on past forms of art and social life, which are, from the parodic point of view, seen as old and outworn”), it also poses a great danger: Because parody looks and sounds like what is parodies, “it can be easily mistaken for its object and taken for a ‘straight’ representation. This feature of its form often causes it to be misrecognized and misinterpreted.”

Those are wise words, and G&S scholars as well as the entire Offenbach community should listen up.

Because this is an aspect that has problematically influenced many discussions and publications on operetta, including the works of Suppé and Strauss. All of them, at some point, have been claimed to be “like” comic operas, Singspiele or whatever else you’d like to call them—instead of parodies of all these genres which call for a parodic playing out, otherwise the joke (and the essence) of these shows gets lost. 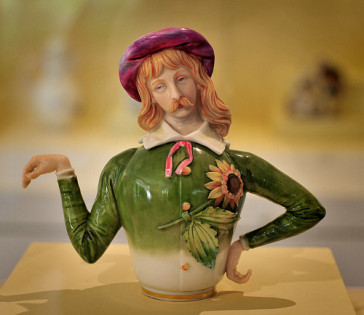 An “Aesthetic Teapot” from 1882, referring to “Patience” and the Aethetic Movement; shown in Carolyn Williams’s book.

Williams also places special emphasis on the women’s roles in G&S, how they differ from what was then considered “respectable” in society, and why G&S’s Savoy Operas stand at the forefront of the social revolution taking place in Victorian England in the second half of the 19th century.

After her general intro, Williams analyses each show separately. And he discusses different aspects in each chapter. One aspect I personally found truly remarkable is her analysis of Patience. We find there a sub-chapter on “Bunthorne in the History of Homosexuality.”

There are many scholars who believe G&S would be appalled if anyone suggested there were anything “gay” in their shows, and Patience in particular.

But Williams demonstrates, which many examples and references, how this operetta and the role of Bunthorne took on a life of its own in the context of Gay Libertation, how it was recycled in later theater pieces, films and musicals.

So, anyone into Gender Studies, or interested in Gay & Lesbian Studies, not to mention the history of operetta in general, will be richly rewarded here. Because the genre parody aspects dealt with also apply to most of Offenbach’s operettas and early Viennese operettas, per 1880.

A similar book on “genre, gender, parody” for those works and their composers needs to be written soon. And hopefully as entertainingly and brilliantly as Williams has done for G&S.