Victor Herbert’s 1915 charmer The Princess Pat was lovingly resurrected by Alyce Mott’s intrepid group as the opener of their Irish season, one which will also include a concert of the composer’s Gallic-themed songs entitled “Son of Dublin” (Mar. 8 and 9) and his most Irish operetta, Eileen (April 26 and 27). 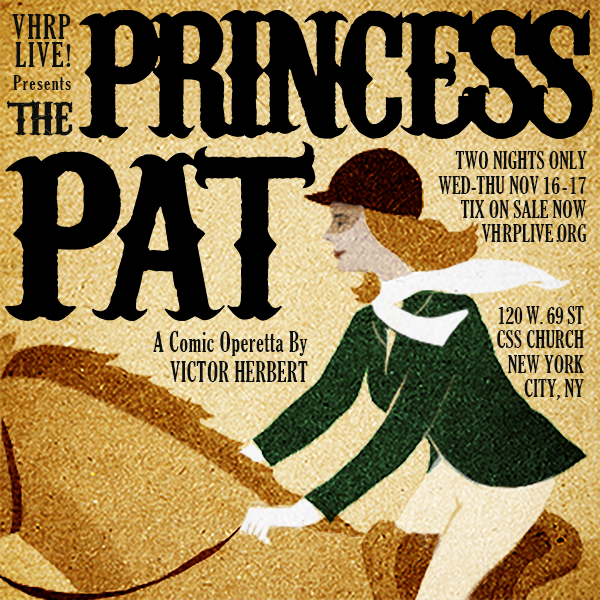 The inclusion of Pat was, by Mott’s own admission, something of a stretch as the heroine’s Irish lineage and one song (“Two Laughing Irish Eyes”) are the work’s only claims to an Irish theme, but no matter. This was still a delightful evening, and to my knowledge, the first time New York has heard the work since the late Herbert expert Fred Roffman’s 1981 production for Bel Canto Opera, that one having the added advantages of sets, costumes, and an orchestra.

Still, with William Hicks at the keyboard on this occasion and the whole enterprise under the assured baton of Michael Thomas, the orchestra was barely missed, and the cast was exceptionally fine vocally across the board, if not always apt from a casting perspective, an important point, as VHRP’s mission is to show how vital and still stage-worthy these works can be.

Mott revised the book – as Roffman, in fact, had done in 1981 – but she and Thomas left the score (ballet music aside) pretty much intact, only reordering the songs. Heroine Pat’s eleven o’clock number “Two Laughing Irish Eyes,” for instance, now became her entrance song, and the great “Love Is the Best of All” was moved to the later spot. 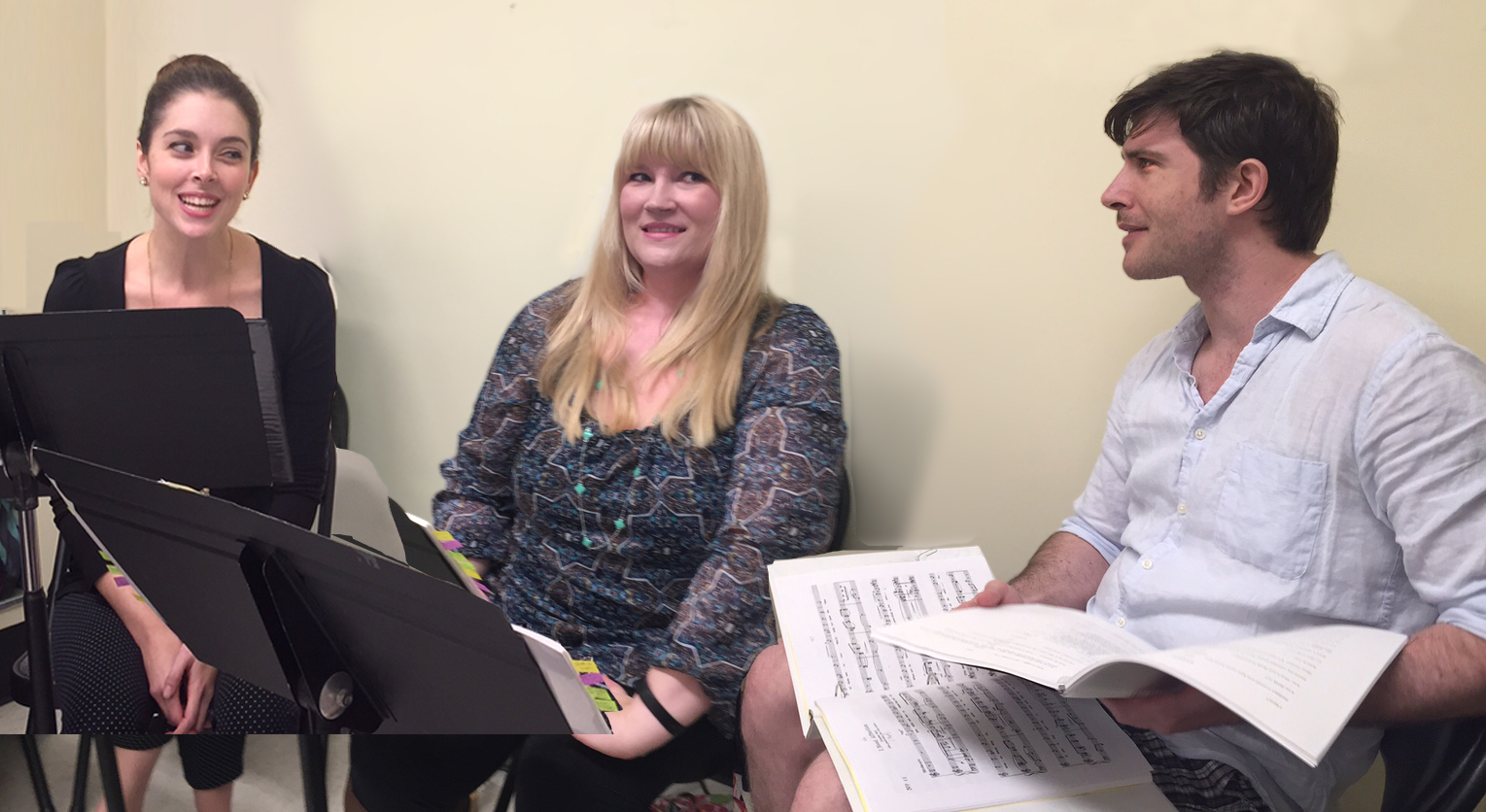 The scene is Long Island in the spring of 1915, and the narrative still involves titular heroine Pat (Angela Christine Smith) contriving to make her Italian husband Prince “Toto” (Jason Robinette) jealous, when he starts to lose interest in her. She will flirt with wealthy German widower Schmalz (David Seatter) which will also serve the double purpose of proving him a philanderer to Pat’s best friend Grace (Sarah Caldwell Smith) betrothed to him only to help her father (Richard Holmes) in his financial difficulties. This will ultimately allow Grace to unite with the young man to whom she’s genuinely attracted, Tony Schmalz (Drew Bolander), son of her intended. This ruse is contrived by New York “swell” Bob Darrow (Brian Kilday), a friend of Tony. All the while, a bumbling sheriff (Anthony Maida) is on the trail Tony and Darrow, who had sped into town initially to crash the Holbrook party.

The singing, as indicated, was of a high level, even if some of the line readings were less so. Still, Mott’s canny stage direction and Emily Cornelius’ neat choreography helped keep suspension of disbelief reasonably in check. Dance, incidentally, was a major part of the original production so it was good to have that component here. 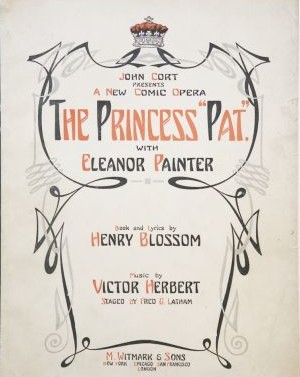 Cover for the piano score of “Princess Pat” by Victor Herbert.

The score – even without Herbert’s delectable orchestrations – was a joy to hear with many highlights. Christine Smith and Robinette did a fine job with the once popular “All for You”; she delivered her two big numbers with assurance and style, and his much recorded “Neapolitan Love Song” was sung with requisite Italianate brio. (His voice was so powerful, though, I almost feared for the roof of Christ and St. Stephen’s Church!)

On the comic side, Seatter gave a spirited, strongly sung account of another of the showstoppers, “I Wish I Was an Island in an Ocean of Girls,” and Maida hit all the comic points of his “The Shoes of Husband Number One (as Worn by ‘Number Two’)” with panache. Holmes had an especially good solo part in the rousing male ensemble “Let’s Drink One Toast.” 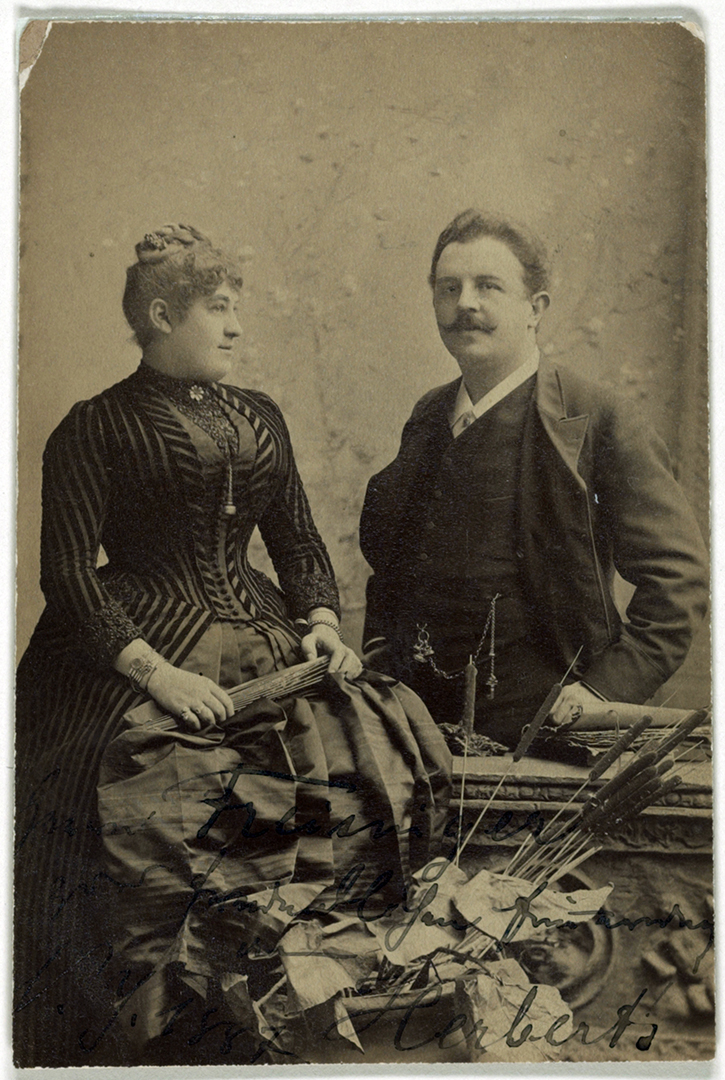 Of the lesser-known numbers – though, of course, nowadays can any of these songs be said to be known at all? – the female duet for Pat and Grace (a Herbert rarity), “For Better or Worse,” not unlike the Flower Duet in Lakme, was especially outstanding, and I found the quartet, “A Little World for Two” Grace and her girlfriends’ teasing “Make Him Guess,” Tony’s jaunty “I’d Like to Be a Quitter! But I Find It Hard to Quit” (well done by Bolander), and the “When A Girl Marries” refrain of the first act Finale all wonderfully catchy.

All in all, we were miles away from the Old World charms of Naughty Marietta and Sweethearts, with this then quite modern show demonstrating another facet of the ever-surprising Herbert.