This week, there will be a concert performance of Leoncavallo’s one-and-only operetta Zazà at the Barbican in London. It’s a joint revival effort by Opera Rara and the BBC Symphony Orchestra. And: there will be a recording produced by Michael Haas, to be released on CD later. 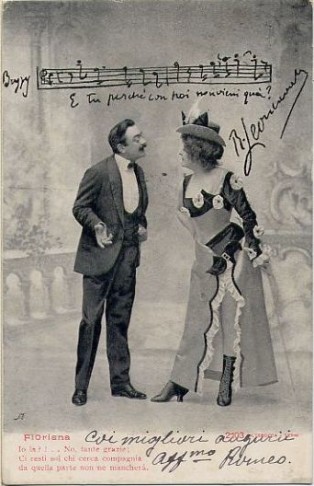 Historical postcard with a scene from Leoncavallo’s “Zazà.”

Of course, the most famous (and possibly best) Italian operetta remains Il paese dei campanelli, the hilarious and glorious sex-farce set in the Netherlands, written by Carlo Lombardo and Virgilio Ranzato in 1923. But Leoncavallo’s Zazà from 1900 is certainly an interesting alternative – with a tragic ending pre-dating Lehár’s tragic operettas by a quarter century. Zazà premiered at the Teatro Lirico in Milan with Rosina Storchio as Zazà. The performance was conducted by Arturo Toscanini. Afterwards the operetta conquered various opera houses around the world. Over the next twenty years it received over fifty new productions from Palermo to Paris, Buenos Aires to Moscow, Cairo to San Francisco, arriving at The Metropolitan Opera on 16 January 1920 in a production directed by David Belasco, starring Geraldine Farrar, Pasquale Amato, later Giovanni Martinelli and Giuseppe De Luca took over.

The show is about a French music hall singer, Zazà, and her affair with Milio, whom she leaves after she discovers that he is married. Michael Haas says about the piece: “What intrigues me is Leoncavallo doing what essentially Krenek did 30 years later in Jonny spielt auf! He takes the popular music of the day – in this case Parisian Varieté – and integrates it into full blown opera while setting his music to a strikingly modern text – think Zola or Flaubert – but actually even more provocative in places. It’s no masterpiece, but then, neither is Jonny, or its present day equivalent Anna Nicole, but it does have a lot of good music, a decent plot and provides a very realistic snapshot of urban Parisian life – nearly as stark as Chapentier’s Louise.”

A few years ago, the Volksoper Vienna revived the piece as part of the “International Operetta” program. Back then, the Austrian radio broadcasted the performance, but no commercial CD was ever issued.

Now, Opera Rara is giving Zazà new life, with Ermonela Jaho in the title role and Riccardo Massi as Milio. Maurizio Benini will conduct the work. The concert performance on Friday at the Barbican will follow recording sessions all through this week.

You can listen to a rehearsal video on the Facebook site of Opera Rara. For more information on Friday night’s performance, click here.

Of course, if you want a classic historic recording of Zazà on CD, you can always listen to the Clara Petrella version, now available via Warner Classic. There are also other, more recent versions in circulation. But: one more is definitely welcome!