As of 2013, the Austrian operetta festival in Mörbisch—near the Hungarian border—has a new director. Dagmar Schellenberger replaced Harald Serafin after what seemed an eternal reign he held over this glitzy operetta wonderland. His reign was particularly important, because every year his latest production was broadcast on Austrian TV, and subsequently on channels throughout Europe. There were new cast albums available everywhere at budget price. And in many instances, the broadcasts found their way to such remote outlets as e.g. the film selection on Lufthansa or KLM. As a consequence, many people who are only moderately interested in “operetta” associated the genre with what they saw from Mörbisch. 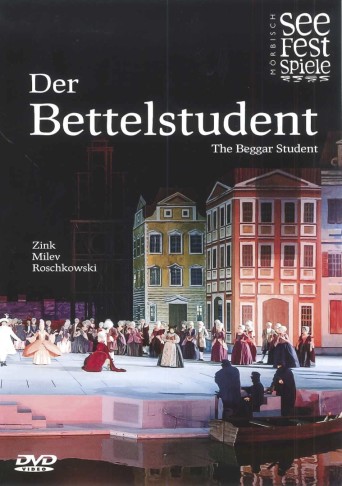 The DVD cover of the new “Bettelstudent” from Mörbisch, Austria.

Many serious critics, in high-brow magazines such as Opernwelt, praised Serafin’s Mörbisch productions as “authentic”, upholding the “true” Viennese tradition, demonstrating the “proper” operetta style und such like praise. Anyone who has ever seen or heard “authentic” operetta performances by, let’s say, Max Hansen, Fritzi Massary, Richard Tauber or even Alexander Girardi (available on YouTube) will know that what you saw in Mörbisch during the Serafin years was not “authentic” operetta but an evocation of 1970s TV operettas, i.e. the period Serafin himself was a blossoming operetta star.

There is nothing wrong with liking 1970s TV operettas, which can also be enjoyed on various Deutsche Grammophon DVDs with René Kollo, Ingeborg Hallstein or Anna Moffo. To name but a few. But no one in their right mind would claim that their way of singing operetta is in any way “authentic” in the sense: like the composer originally intended. All accounts of first nights in Vienna during the 1860s and 70s describe a way of performing operetta that is radically different to what Serafin offered in Mörbisch. Visually, and acoustically.

Still, operetta à la Serafin had (and has) its fans. But they seem to be becoming less and less.

As a consequence, he was forced out of Mörbisch, as a result of dwindling ticket sales. And after a thorough search for a new “intendant”, German soprano Dagmar Schellenberger was named new boss of the festival.

Her first production was Carl Millöcker’s Der Bettelstudent. Some considered it a wise choice, as it’s undoubtedly a “Viennese” operetta, but with a Saxonian twist, i.e. the county in Germany where Miss Schellenberger hails from. Schellenberger exchanged the entire previous Mörbisch artistic team and brought in new singers, a new stage director, and—most importantly—and new set designer. Yadegar Asisi had caused quite a stir when he constructed a 360° panorama of Ancient Greek Pergamon, for the Pergamon museum in Berlin.

His vision of Cracow, where the Bettelstudent is set, did not come across quite as spectacular. But you could say he was worth a try.

The actual live performance in Mörbisch got mixed responses from the press. But, by all accounts, that first Schellenberger summer was a successful one. This year, she will present operetta fans with Anatevka, which is the German version of Fiddler on the Roof. 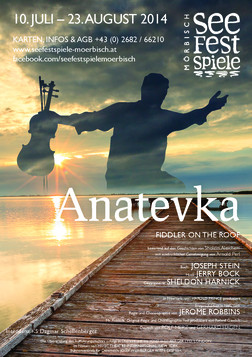 The 2014 offering of the Mörbisch festival.

It will be interesting to see whether Schellenberger will follow the example of the Châtelet in Paris, who have totally abandoned operetta and have focus almost exclusively on grand musical comedy. Remember Sunday in the Park with George, A Little Night Music (with Leslie Caron), and just now The King and I (with Susan Graham)?

The DVD version of Schellenberger’s first year at Mörbisch just came out on Videoland (VLMD 020). This filmed Bettelstudent is not exactly an operetta revolution. The only somewhat revolutionary aspect is that it’s not taken from a traditional first night broadcast, but is an individual DVD release. Because Schellenberger feared that people who see the TV broadcast would not bother to come to the actual festival.

It’s difficult to say whether this new DVD will stimulate anyone to visit the festival in 2014 or beyond. There is little glamour in last year’s Bettelstudent. And there are no real stars. Two essential ingredients for Viennese operetta. We shall just have to wait and see how the story of Mörbisch unfolds in the future. We wish Miss Schellenberger lots of luck for the time coming, because the world needs at least one great operetta festival with a great media outlet. And, yes, we are thankful that she replaced Mr. Serafin at last and put an end to these eternal TV-operetta-style performances forced upon the world as the “holy grail” by critics who should have known better.