Yes, it is somewhat unusual: a crime novel that is not directly set in the operetta world, but references that world permanently in a story set in Vienna 1932. Of course the big operetta hits of that year were Im weißen Rössl and Paul Abraham’s Die Blume von Hawaii, both imported from Berlin. The hit songs from these shows – as well as Johann Strauss’s immortal operetta – figure prominently in Sebastian Benedict’s novel Operation Fledermaus; but that is not the only unusual thing in this 360-page German language book. 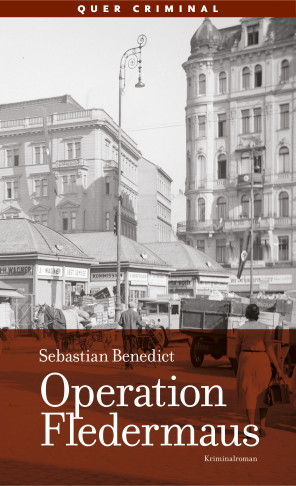 The other unusual aspect is that the main character is a detective called Ferdinand who is openly gay, as are nearly all of the other main characters in this tale of male prostitution, abduction of young boys, early porn films, and decadence in times of socialist government in Austria. The mysterious abductions are conducted by the so called “Operation Fledermaus” – and the (heterosexual) head of the Viennese police force is after them to unmask the culprits. But it’s the young and dashing Ferdinand that solves the case in his very individual and amateur way, and via his somewhat unique connections. There is a lot of sex in the story, yet the novel never really turns pornographic. It only describes sex (and homosexuality) in a very casual language, which is in sync with the historical panorama painted by the author. Anyone who wishes to get an inside look at the socio-cultural landscape of the Austrian capital in 1932 will want to read this “historical novel,” which does not only include many songs from hit shows of the Jazz Age, but introduces characters from the operetta scene, for example Hubert Marischka, who starred in Weißes Rössl and at whose Theater an der Wien Blume von Hawaii played.

It would be interesting to see this story turned into a film, because then you could make more of the musical references by including them in the soundtrack. Till that happens, I highly recommend Operation Fledermaus to anyone who wants to delve into a detailed historical crime novel set in 1932, with a lot of homosexual subculture and a lot of quoted operetta music, plus irresistable café house atmosphere.

The author, Sebastian Benedict, was born in Vienna in 1944. From 1975 to 1995 he was cultural editor of an Austrian weekly newspaper. He is the father of two grown sons and lives in Wien-Margareten with his partner. Operation Fledermaus is his first crime novel published in the series “quer criminal” (Quer Verlag).