No, it is not a Tennessee Williams play turned into an operetta. Instead, A Summer Long Ago (A régi nyár) is a charming opérette-légère by composer Lajos Lajtai and comedy author István Békeffy from 1920s Hungary that the Budapesti Operettsínház has just revived in an equally charming studio production with some of the greatest stars of their operetta ensemble, Marika Oszwald among them. Seeing this show without understanding a word was like taking a trip down memory lane. And loving every second of it. 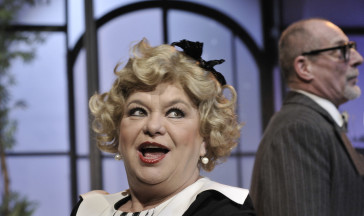 While I was in Budapest recently, A Summer Long Ago (or So This Is Love) was on. I had never heard of it, and was warned that there would be no supertitles for it either. So I looked up the story in the season’s broschure; only to find out that A Summer Long Ago is something of (yet another) Hungarian classic: a show originally written in 1928 for Sári Fedák (1880-1955) , but not premiered by her, but Hanna Honthy (1893-1978) instead. In 2015, the role of the prima donna is played by the wonderful Zsuzsa Kalocsai (born 1962) who I saw as a glorious Countess Maritza some 15 years ago. She has aged well, and oozes that very particular style – or aura – she has always been famous for. In a way, she’s the last of the truly great Hungarian operetta divas of the Fedák/Honthy caliber. Or in the league of Margit Schramm and June Bronhill.

In this show, she plays an operetta diva (how appropriate!) living in the country, where her daughter comes to visit, telling her she will fall in love … soon. After all, she is a young woman with hormones raging through her. The aged diva Maria wants to prevent that falling-in-love scenario, remembering what a hard time she herself had in that summer many decades ago when she fell in love herself. A young suitor of Maria, called Miklós, turns out to be the new and first love of the daughter when he bumps into her in the garden. Maria eventually approves of this, makes up with her old flame along the way, who she did not marry in that long ago summer – and who is the father of Miklós. Everyone is happy in the end, including the two amorous servants. 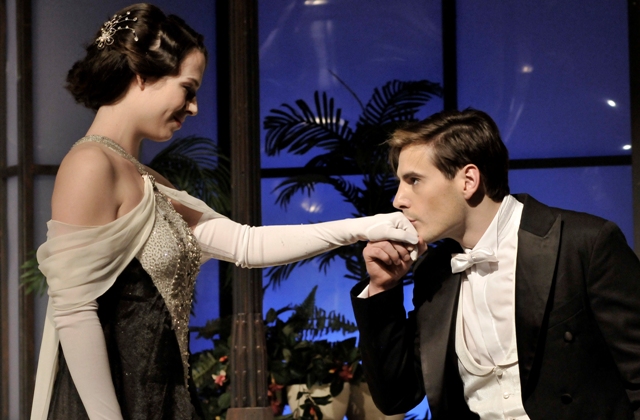 Imagine all of this in a Little Night Music kind of setting; very small and very intimate. With only a pianist playing the bouncy period music, which also has some moments of wonderful melancholy; both sides perfectly executed by the sololist. Apart from the dazzling Zsuzsa Kalocsai, there is operetta veteran Marika Oszwald as the “maid.” It really is a performance that needs to be seen to be believed. Miss Oszwald is a trouper and makes this maid borderline crazy, in a demented sexy way. Even if you don’t really understand what she’s saying, you know it’s funny because Oszwald get’s a laugh from the audience every 10 seconds. 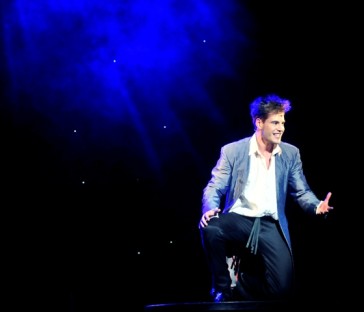 Denes Kocsis in “Mozart,” the production that made him famous in Hungary. (Photo: Budapesti Operettsínház)

The other big attraction of the production is a young and handsome musical comedy star of the Budapesti Operettsínház: Dénes Kocsis. Next to Zsuzsa Kalocsai his voice is small, unamplified, but clear and ringing; plus, he has superb stage presence and is about as perfect as can be as the infatuated young man in love with the older woman first, and then discovering the daughter. Their foxtrot duets together are one of many musical highlights of the evening, as are the sensuous love scenes with Zsuzsa Kalocsai smoking and looking like Norma Desmond.

The mixed audience – the elderly came for the famous operetta divas, the younger for the musical comedy star – loved what they saw and laughed all the way through. And I found it highly entertaining, even in Hungarian. The story was easy enough to follow. And seeing such a Hungarian national treasure, live on stage, was a treat: this is as true for the show as for the stellar cast. And meeting Marika Oswald afterwards was, yes, a thrill. Thank you to Éva Erdei Kiss who took me to see A régi nyár and who helpfully translated relevant cues so I could follow the plot more easily. She was a delightful operetta companion and took me to meet Marika Oszwald at the stage door afterwards, for a one-of-a-kind photo opportunity. 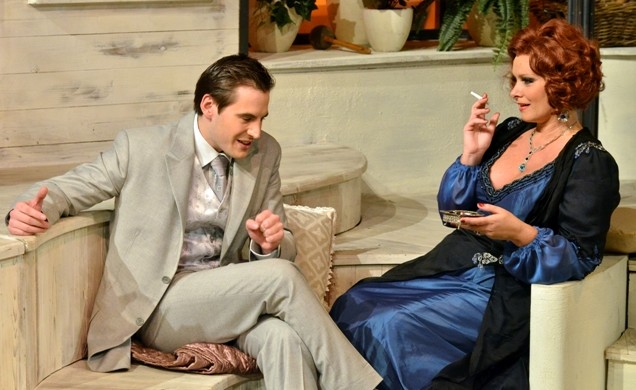