Of course, there have been many recordings of operetta in English before. There’s the famous Decca series featuring Kitty Carlisle, for one, and there’s the EMI series with June Bronhill among other singers for another. In more recent times the Ohio Light Opera issued many gems of the genre in English language versions, vocally maybe not as top notch as Bronhill & Co., but in many cases a first chance ever to hear certain works on CD, such as Kálmáns Bajadere and Der gute Kamerad. Now, another US-based operetta company has started to record shows and issue them on CD. 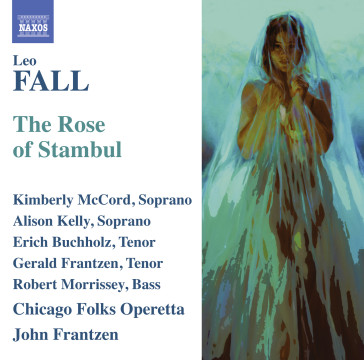 A Leo Fall recording from Chicago, released on Naxos.

They call themselves the Chicago Folks Operetta and were formed in Chicago, Illinois in 2006. They first CD release in cooperation with the international label Naxos is Leo Fall’s Die Rose von Stambul or, as the cover claims: The Rose of Stambul. The double disc is conducted by John Frantzen and features Kimberly McCord in the title role. Whether she can erase the seriously compete with the recorded legacy of the great Fritzi Massary, for whom  the show was written, remains to be seen. And whether Erich Buchholz is a match to Fritz Wunderlich who recorded the operetta in the 1960s shall remain a matter of discussion. In any case, it’s the first ever release of the show in English, so it will doubtlessly attract new audiences to this glorious Leo Fall masterpiece set in Ottoman Turkey and dealing with many topics still relevant today, e.g. the right of women in Muslim culture to decide for themselves who they want to marry and what they want to do with their lives.

One way or another, it’s great to know that the monopoly of the Ohio Light Opera has now been broken and that there will be more competition in the field of English language operetta – in the theater and on disc – in the future.

Because with competition the performances and recordings will ideally get better in the future. Also, while the Ohio guys have lately centered there activity mostly on Emmerich Kálmán, it’s good to see that the Chicago folks have opted for Kálmán’s contemporary and competitor Leo Fall. It will be interesting to see which titles shall follow in the next years. So, watch this space!