Within the next couple of years A Trip To Africa (Die Afrikareise), widely considered to be Franz von Suppe’s best operetta at the time of its production in 1883, will be at last performed in Europe. The last recorded performances are in the 1920s in the USA, Italy and France. Since then the work seems to have been forgotten. 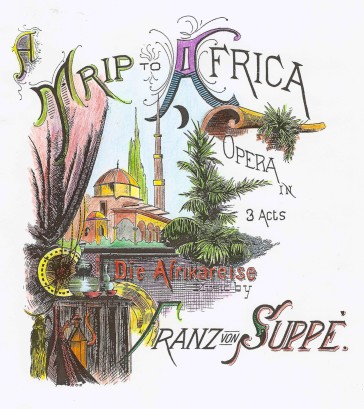 Sheet music cover for Suppé’s “Die Afrikareise” in the English version as “A Trip To Africa.”

Maestro Dario Salvi and his wife Hannah have been working extensively on the original material to prepare it for a performance and to make it available to Opera Houses all over the world. The English text will be used to give the Operetta a broader appeal and to ensure its survival in an age when musicals and musical theatre are mainly performed in English, however the Italian and German versions are available upon request.

After many months of research, Salvi managed to find the material needed, stored safely at the University of Winsconsin, in the US. Thanks to the efficiency of the team at the university, all the material has been digitally scanned and sent to Britain where it has been transcribed and corrected, resulting in the completion of the orchestra score with full orchestrations, including Flute, Piccolo, Clarinet 1,2, Bassoon, Horn 1,2, in F, Trumpets in Bb (transposed from the original in F), Trombone, Timpani, Percussion (Snare Drum, Bass Drum and Cymbals, Triangle, Tambourine), Violin 1, Violin 2, Viola, Cello and Contrabass, Singers and Choir. A Vocal/Piano score has also been created (Sibelius 7). 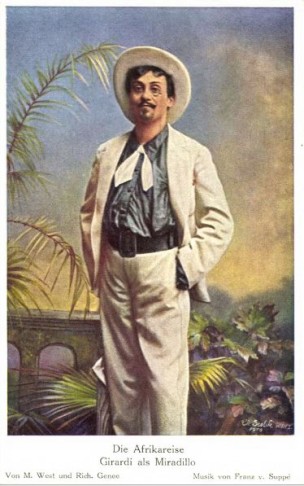 The restoration of the damaged parts and comparison between the handwritten parts (full of mistakes and contradictions) and two vocal/piano scores has allowed the team to come up with revised and corrected material.

From the original script book and Stage Manager Guide, a full booklet of text and stage guides (including costumes and scenery) is being compiled. This will, for the first time, make the whole text of the Operetta available in one document.

The performance will involve players from the Imperial Vienna Orchestra and a group of singers recruited specifically for the event. Dates and times are yet to be confirmed but are already in discussion.

You can find a German language article on this show and project on the official Franz von Suppé website, written by Uwe Aisenpreis.