Nature or nurture – that’s the central question in this charming social experiment operetta in three acts by André Messager. It premiered in 1897 at the Théâtre des Bouffes Parisiens. That’s Offenbach’s old theater where his mad-cap shows gave the genre a decisive formal stamp; it’s also the high class theater into which you could only enter in full evening attire. One may assume that the story of a young aristocratic girls that ends up with the Michu family in the chaos of the 1793 revolution and is raised together with the Michu’s own daughter till both are attractive teenagers was intended as amusement for the moneyed upper (male) circles of Paris. 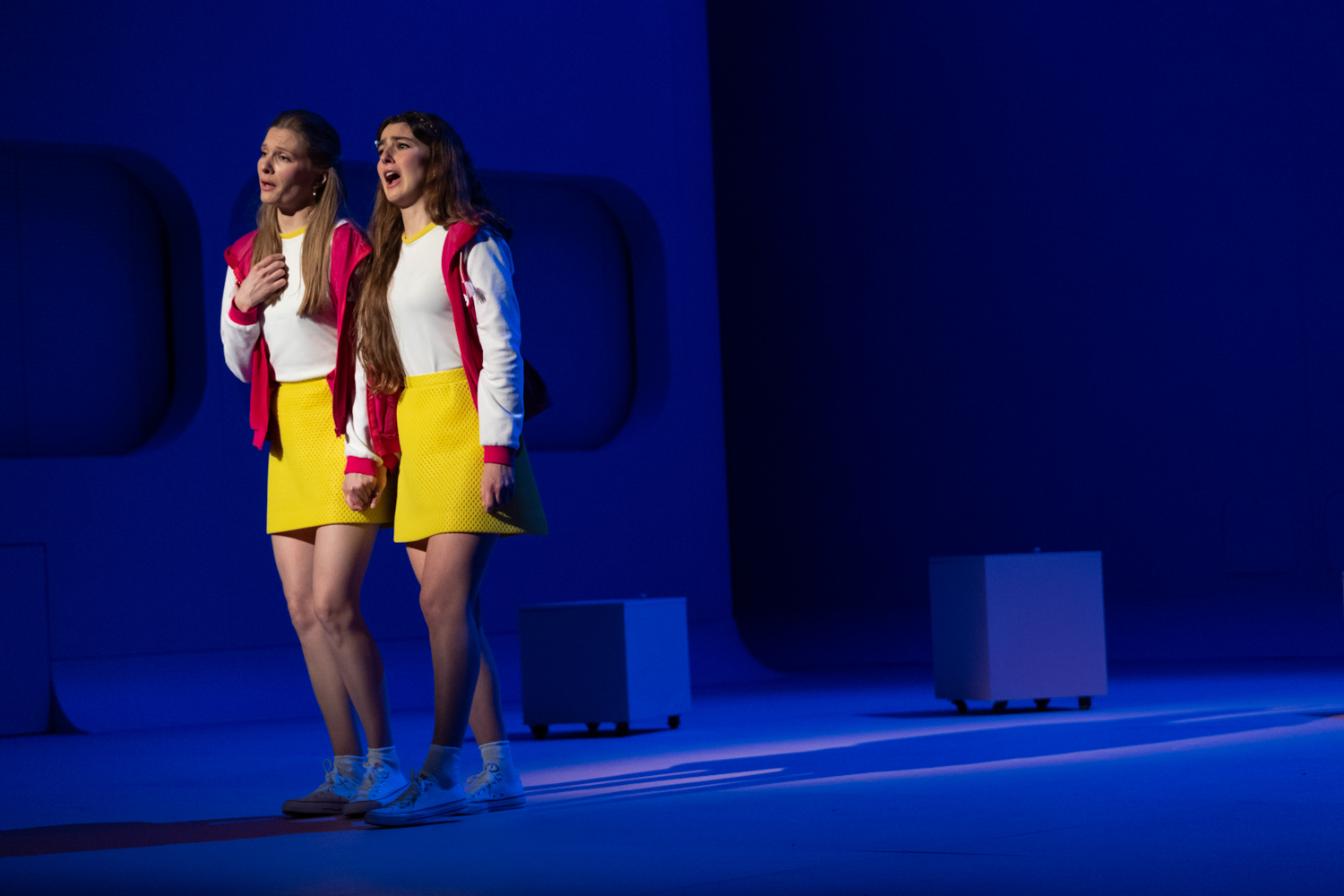 The joke in the story is this: Father Michu can’t tell the two baby girls apart after having bathed them. He doesn’t know which his own flesh and blood is, and which is the daughter of the famous Général des Ifs. So Michu simply claims them both as his daughters and raises them in the markets of Les Halles where he runs a cheese shop. He then sends them to a boarding school. Which all works well until the general suddenly shows up out of nowhere and wants his daughter back: as a prize for his comrade Gaston Rigaud, a dashing young officer who assisted him in battle. That’s the only paternal interest the general has in his offspring after 16 years. 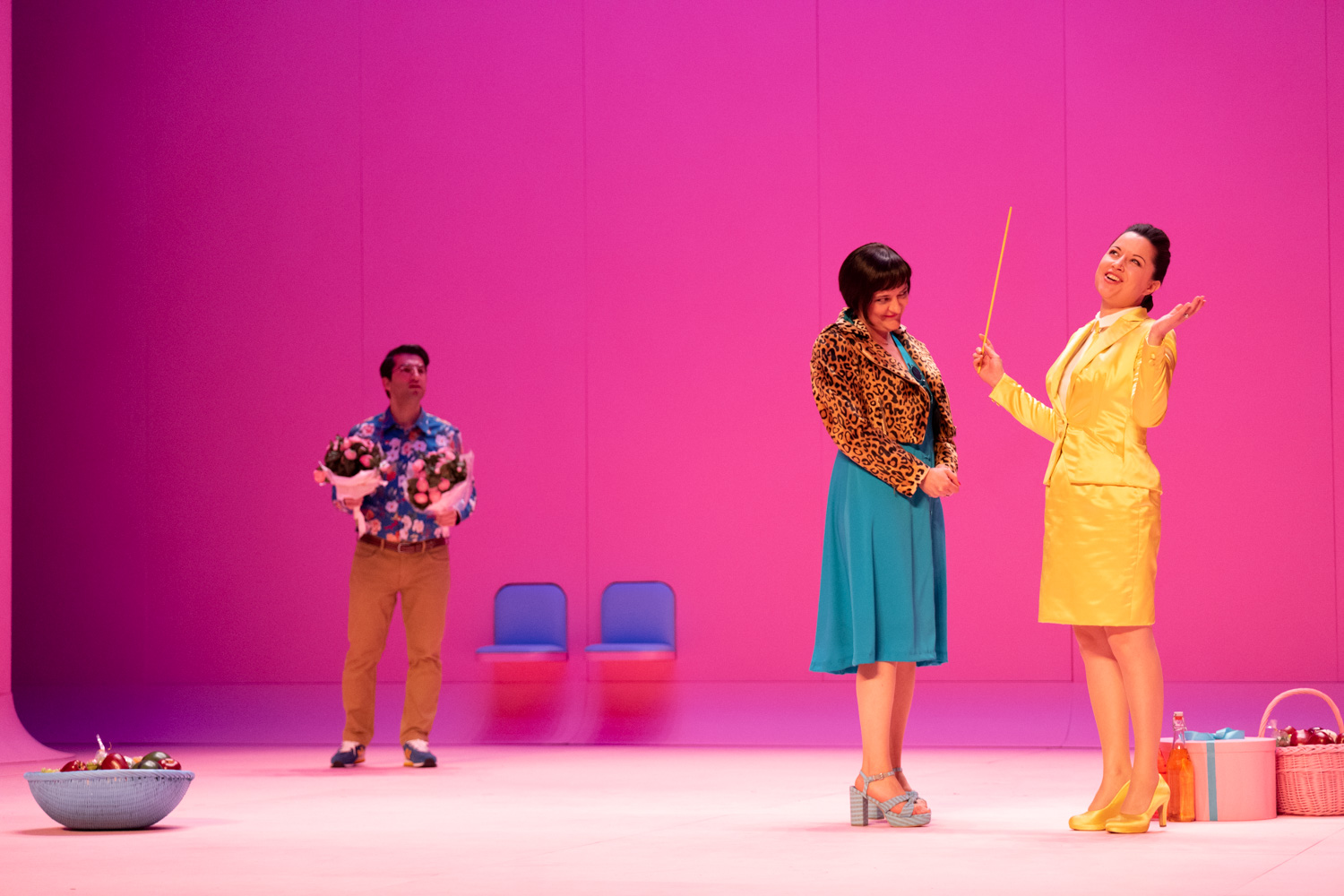 The action starts in Mademoiselle Herpin’s boarding school for young girls where France’s future brides and mothers are rigorously trained. The girls dream of falling in love with strong heroic men such as Gaston who shows up during a visit to his aunt, Mademoiselle Herpin. The two Michu girls, Blanche-Marie and Marie-Blanche, are smitten. “C’est un héros,” sighs Marie-Blanche with admiration. Gaston is unaware that one of the two 16 year olds is his bride-to-be, which doesn’t make his flirting with them any less passionate. 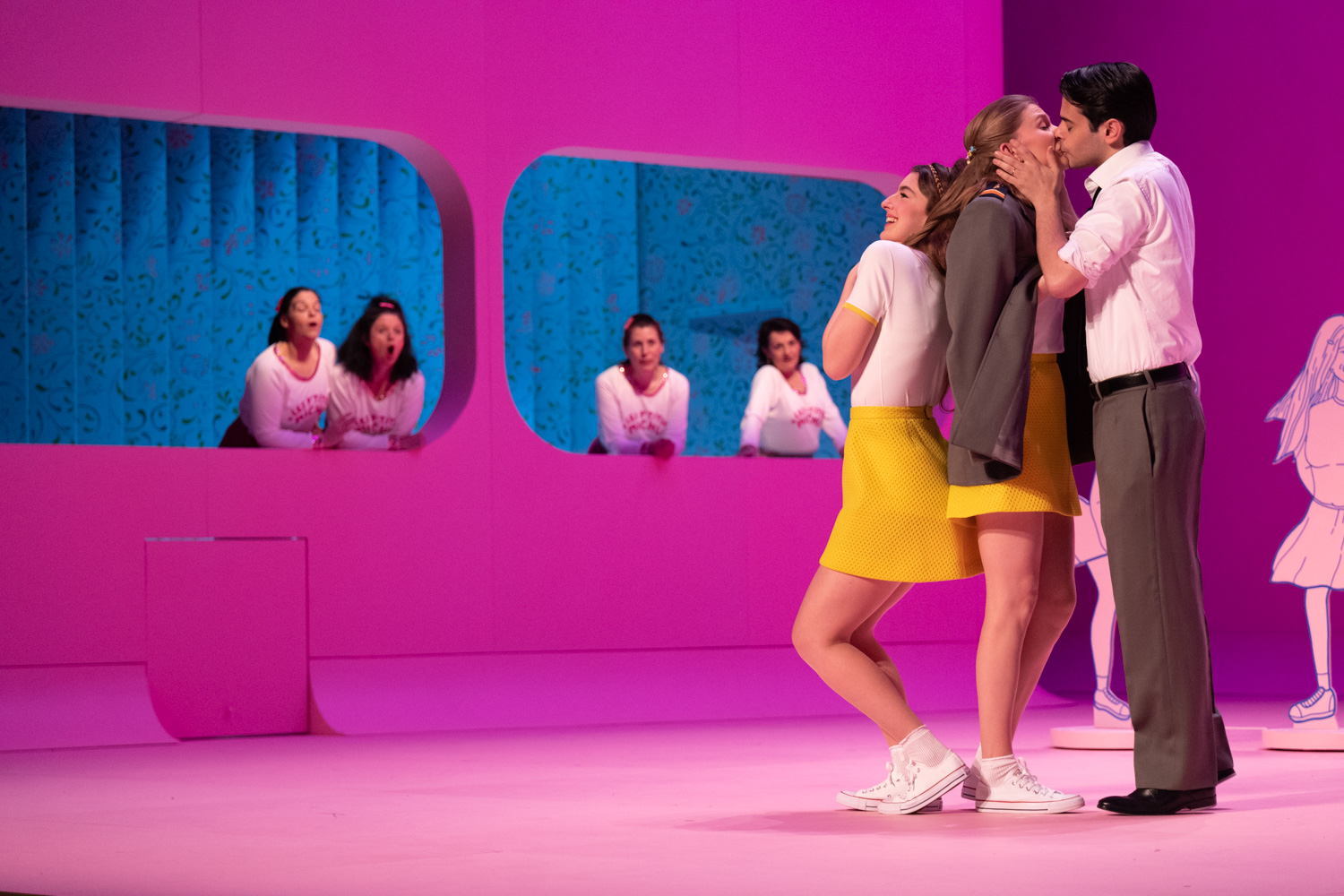 Of course, such a situation was a wet dream for the typical theater goer at the Théâtre des Bouffes Parisiens. Especially since the other boarding school young girls are running around, screaming with ecstasy as well. It’s a situation also known from shows such as Franz von Suppé’s Das Pensionat, 1860.

What happens next? Since it’s impossible to tell which girl is the real Marquise des Ifs, both Maries have to sort things out among themselves. In act 2 Blanche-Marie renounces Gaston, in a noble gesture, and agrees to follow her parents back to the cheese shop where a future awaits her as bride of the simple shop assistant Aristide. Blanche-Marie stays in her father’s castle and has to learn how to behave ‘aristocratically,‘ which she finds excruciatingly difficult. 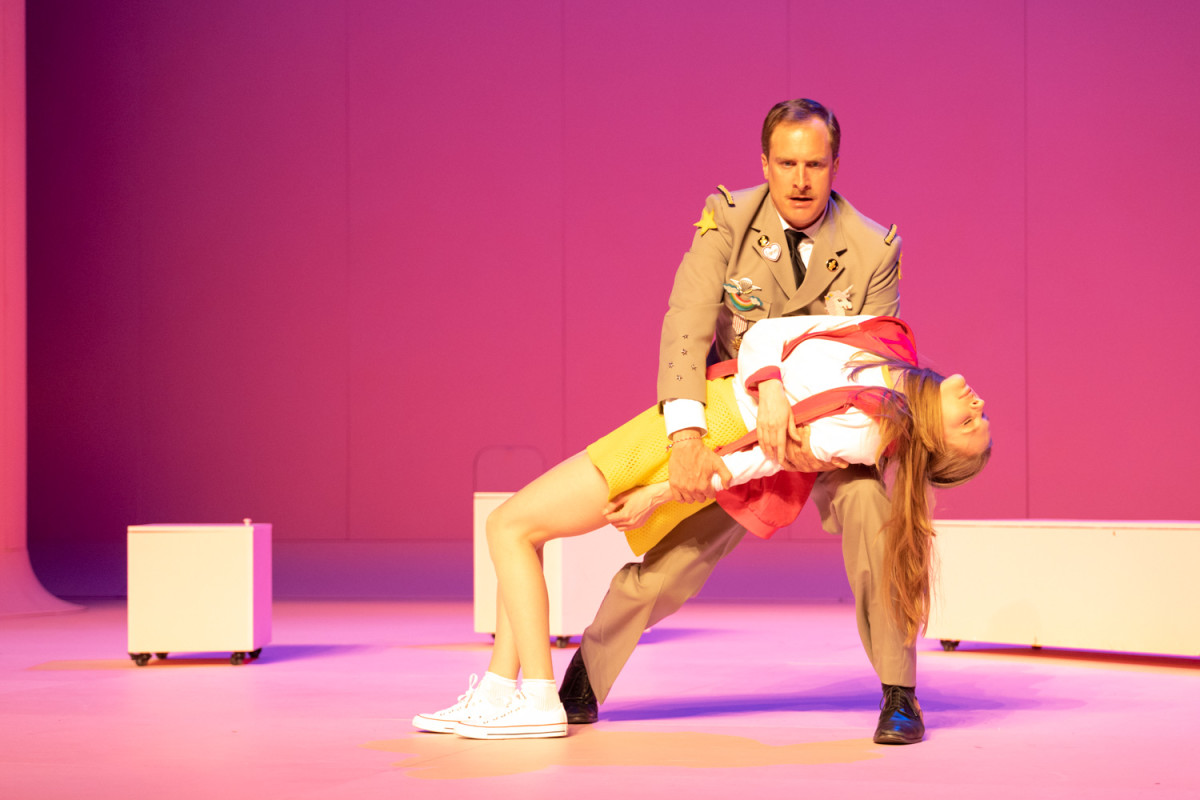 In act 3, both girls realize just before heading to the altar that their future looks grim: the one hates the world of fine manners (and even Gaston), the other is far too refined for a cheese shop and Aristide. So they swop, because it turns out that Blanche-Marie is the ‘true’ aristocrat with inherited nobility, while the more vulgar Marie-Blanche is the ‘true’ working class girl. She can’t help herself, and likes Aristide. So there’s a double wedding, all are happy, and friends and family throw a big party at Les Halles for the finale ultimo. 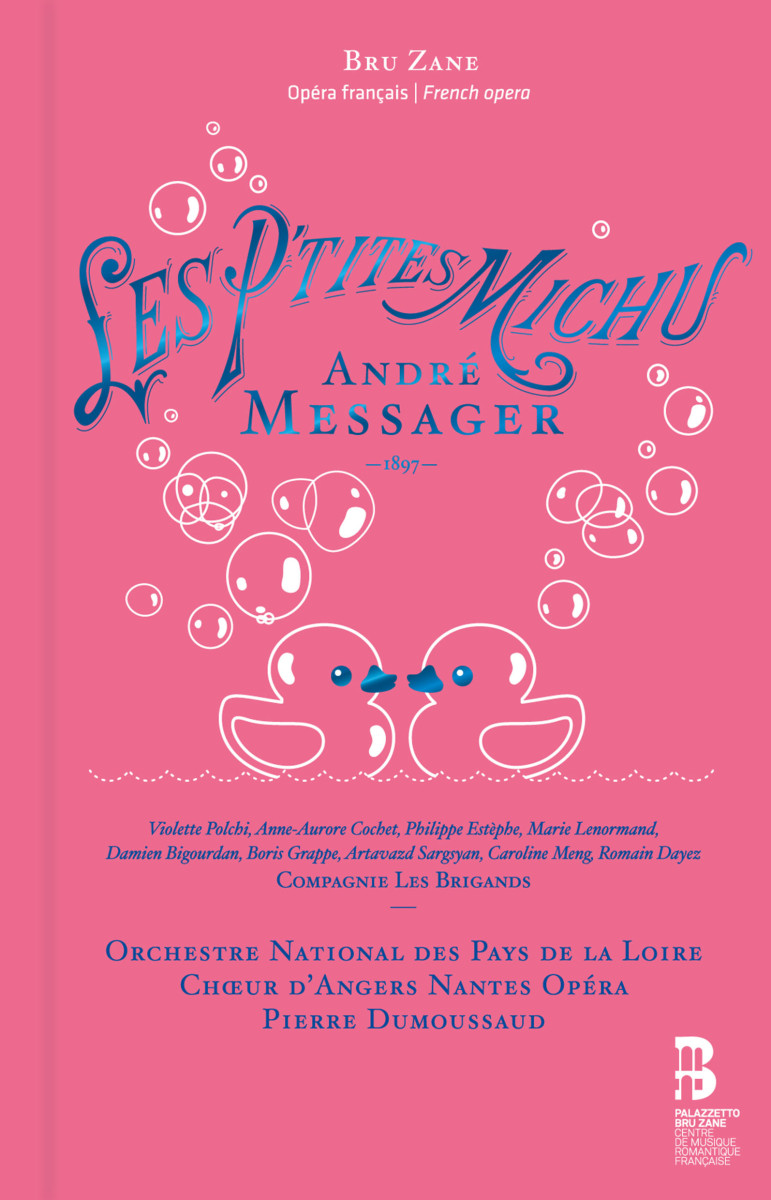 The cover of the CD edition “Les p’tites Michu” by Palazzetto Bru Zane.

For the first operetta in their CD series, Palazzetto Bru Zane has collaborated with the theater group Les Brigands. They recorded Les p’tites Michu during a live performance at the Théâtre Graslin in Nantes, in a staging by Rémy Barché.

The cast is young and quirky, and they all look like an updated version of Les Demoiselles de Rochefort, which makes the aristocracy vs. working class story a little less poignant (and funny). But of course Violette Polchi (Marie-Blanche) and Anne-Aurore Cochet (Blanche-Marie) look charming as copies of Catherine Deneuve and Françoise Dorléac who play the twin sisters Delphine and Solange in the movie.

The operetta needs strong character types that create contrast. It’s something you don’t get on this CD, acoustically speaking. The only real character voice here is Caroline Mang as Mademoiselle Herpin, her scenes are crazed highlights on the discs. Romain Dayez as the assistant of the general, who has to find the girl(s) and bring them home, plays a hilarious slapstick character (much against his own type) and creates grand moments of laughter, especially in act 1. It’s a stand-out performance.

All others are not really individual enough. That’s especially true of Boris Grappe as Général des Ifs and of the two husbands-to-be: Artavazd Sargsyan as Aristide isn’t ‘simple’ enough for the role, and Philippe Estèphe as Gaston lacks tenor glamour and swagger to make the role funny. The two young Michus, on the other hand, offer very little soprano charm, the voices don’t have that silvery sparkle that was once standard requisite for any soubrette.

But everyone involved sounds ‘French,’ and because of the live theater situation very ‘alive’ in the dialogue scenes. That’s an enormous plus.

What struck me is how difficult it is for young operetta singers to shift from dialogue to song. Or differently put: no one tries to do anything other than sing once the music starts. Conductors such as Adam Benzwi have demonstrated with stars like Dagmar Manzel and Katharine Mehrling how effective it is to blur the lines and have singers do ‘more’ than just sing.

It’s something young Pierre Dumoussaud conducting the Orchestre National des Pays de la Loire is not interested in. Which is a pity. Because the overall effect of Messager’s work would have benefited from a more integrated approach and from more Gestaltung in the sung music. Still, the music is played in a lively way and is fun to listen to.

There are various video clips of the production. They make it evident that everyone seems to be enjoying themselves. They toured the production for months last year throughout France and will bring Les p’tites Michu to Paris this summer. Since the voices are only partly convincing on CD, I wonder why a DVD wasn’t made. It would be a much better option. And I’m not just saying this because I would love to see Romain Dayez. (Why isn’t he playing a swaggering Gaston, by the way?) 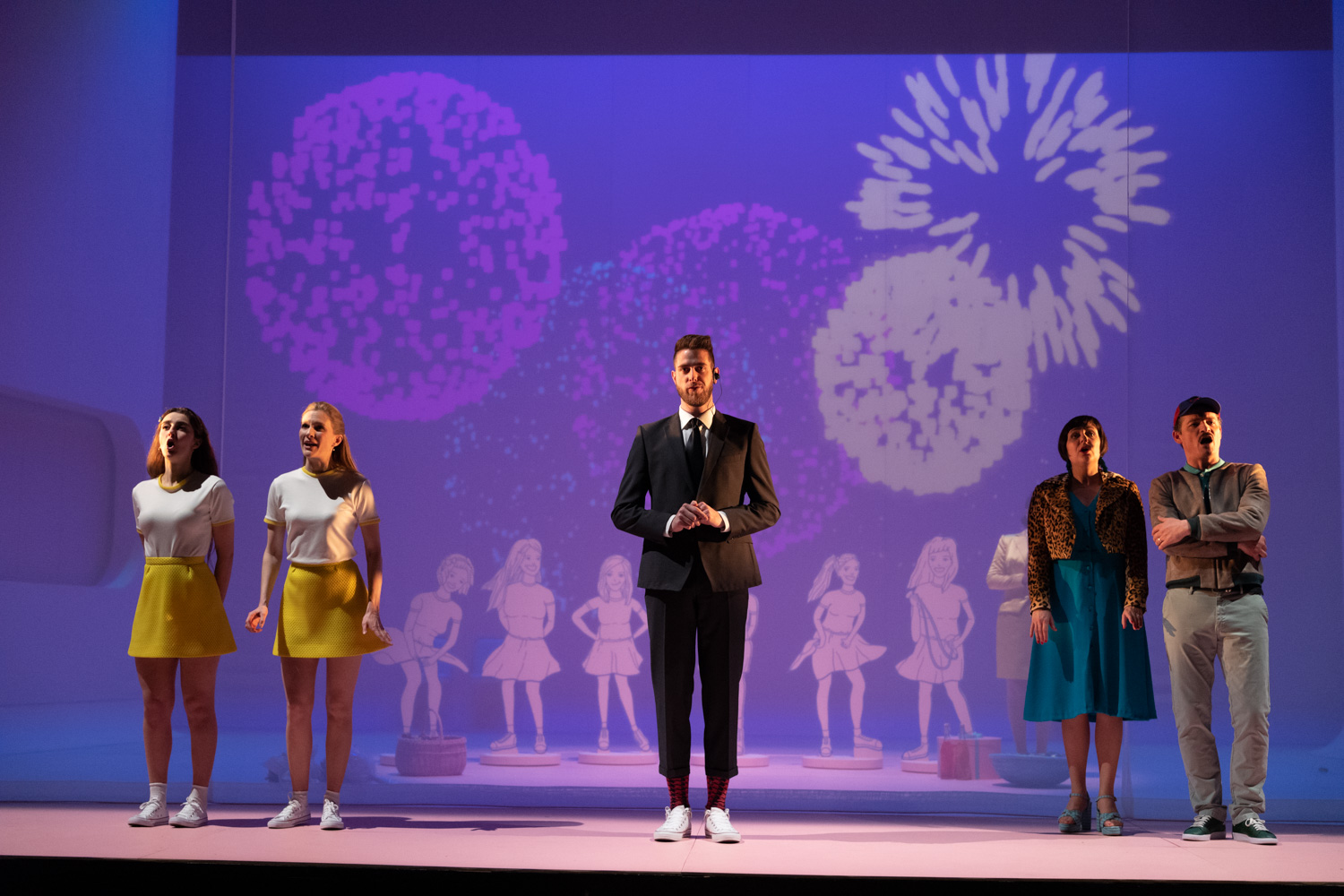 Considering that there is only one alternative historic recording available from 1953, this CD release is a unique chance to get to know the bubbly show with a libretto by Albert Vanloo and Georges Duval. Their story would offer stage directors many options beyond Demoiselles de Rochefort, without turning the whole thing into a pedophilia tale à la ‘Thank Heaven for Little Girls.’ Even though Maurice Chevalier would be a superb Général.

What’s especially worthwhile about this CD is the booklet essay by our friend Christophe Mirambeau, one of the great experts on French operetta. Last year he published a Messager biography that Kurt Gänzl raved about on these pages. There are also fabulous photos from the original production in the booklet as well as sheet music covers from the late 19th century, for example a waltz arrangement made by Paul Lincke. 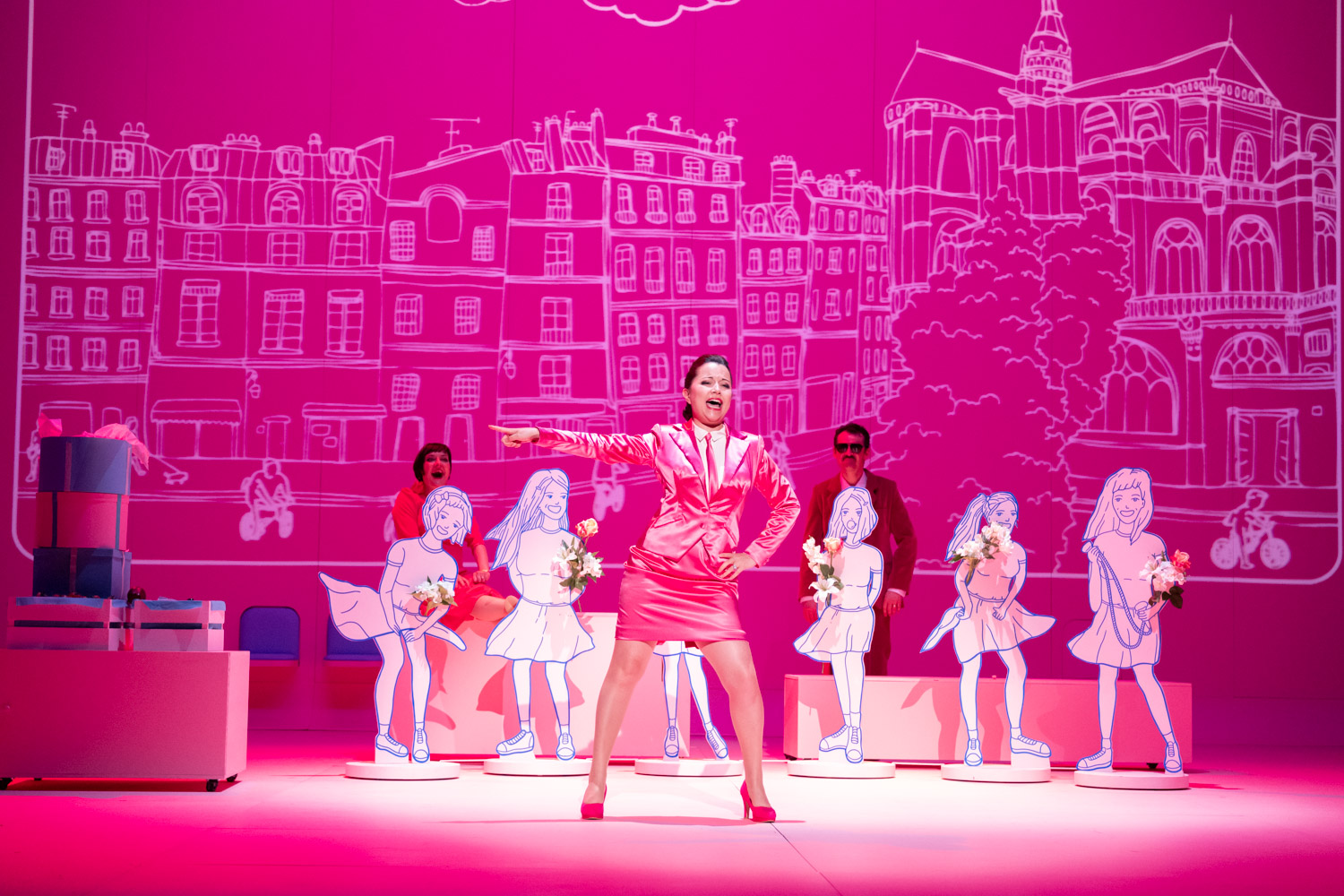 I’m very curious how the operetta series at Palazzetto Bru Zane will continue, especially regarding Hervé who was performed by the company but no CD was released yet. A bit more daring to leave well-trodden paths is something I’d wish for artistic director Alexandre Dratwicki with regard to casting and conducting. Because a company such as cpo has proven: it’s not enough to release long forgotten works to revive interest, you need a spark of originality. Pointing towards Catherine Deneuve is not original enough, certainly not if there are no audible consequences. Let’s say there is room for a little improvement here at Palazzetto Bru Zane. 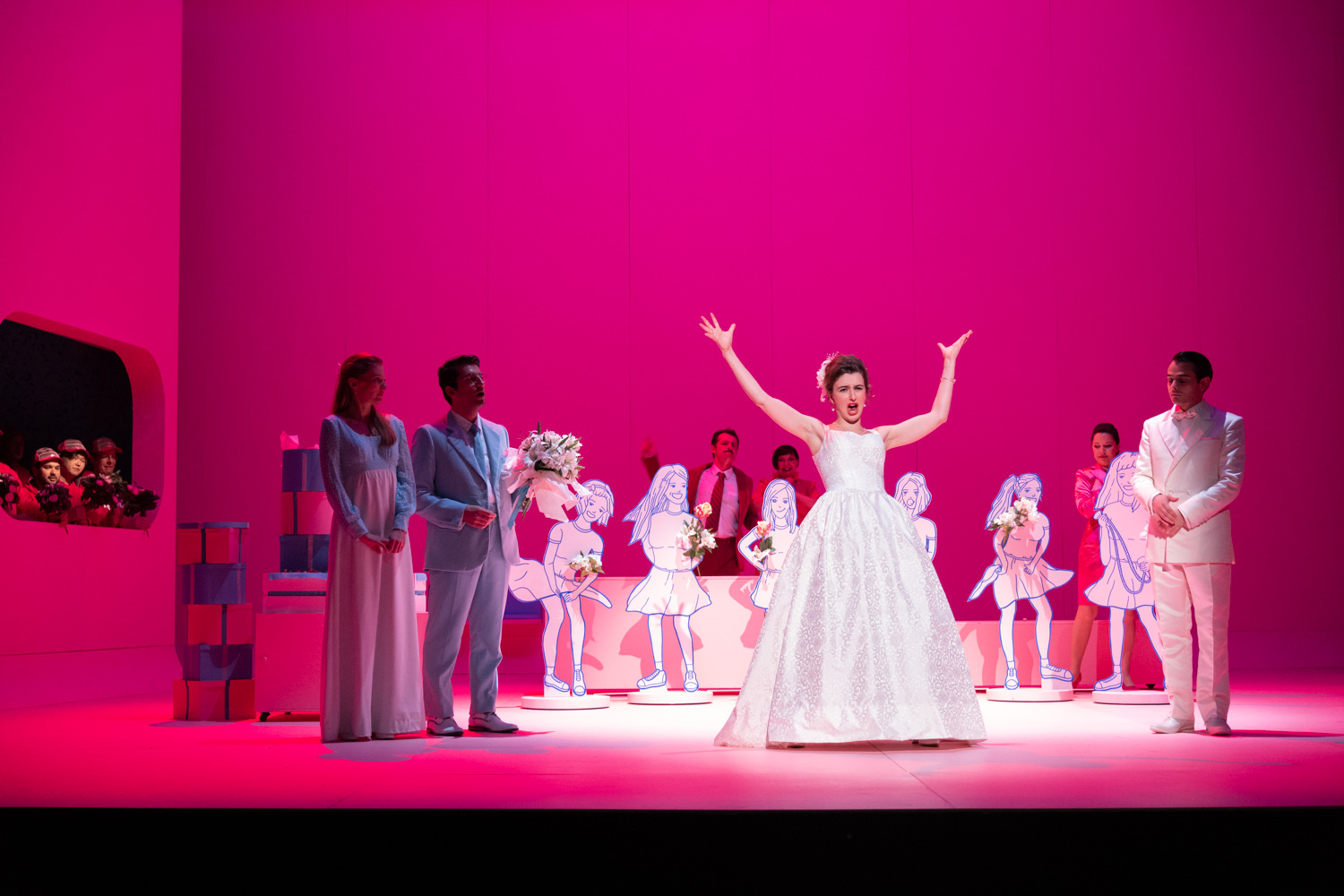 Which doesn’t change the fact that this CD and the related stage production are a great start into the operetta year 2019. It will probably be dominated by the centenary of Jacques Offenbach’s birthday. And as you know, Offenbach himself also wrote a wonderful market operetta: Mesdames de la Halle (1862). On the old EMI recording you get to hear all those unique character voices – Mady Mesplé, Charles Burles, Michel Trempont et al – who are sorely missed today. I’m sure such voices are still around, they are just not hired by operetta producers. Maybe Palazzetto Bru Zane can change that for the French market and really point the way to the future?