The Musical Theatre book of the decade. I sha’n’t gush. Well, I’ll try not to. But … I thought that it was unlikely, in this day and age, that a new book dealing with the 19th and/or 20th century musical theatre could surprise and enthuse me. I mean, it’s all been said and done, hasn’t it? Chuckle, much of it by me. But then there is the new: André Messager. Le passeur de siècle by Christophe Mirambeau.

The last time I was really grabbed by musical-theatre book, a book that really taught me something interesting and novel and wasn’t just a re-hash of told stories and opinions, was when I read John Kogel’s American Music in German Immigrant Theatre. Yes, that was 2009. It was sent to me for review by Kevin Clarke of the Operetta Research website and it consisted largely of a biography of Adolf Philipp, the half-forgotten ‘inventor of the American musical comedy’ (Americans don’t admit this!). Well, this week Kevin got in touch again (nine years on) with another book for me to review, and I was having a quiet, dawn-sunny (6.45 am) breakfast on my Australian seaside terrace, when bang! 500 pages (plus illustrations) landed on my desktop. Aw, gee. Tomorrow?

But I peeped in, and I was lost. It’s now 5.42 pm. Eleven hours (with comfort stops). I’ve just read the entire book, cover to cover. So I shall pour a lime and gin, and tell you all about it.

The book is a biography of André Messager. Yeah. Him. Composer of ‘Trot here, trot there’? And some. And a heck of a lot of ‘some’.

This new book is written by French author, Christophe Mirambeau, who has previously expended his talents on books about Luis Mariano, Barbra Streisand and Albert Willemetz. This one is in way, way up another league, even, than the Willemetz. Gold. Pure gold.

Messager is (I know now!) a wonderful subject for a biography. He begins with a success in the world of 1880s opérette, remakes himself – while carrying on a parallel career as a conductor and administrator – in the early 20th century with ‘gentille opérette’ and, all over again, after the war, with some dazzling musical comedies. He starts on a high, ends on a high … and even if there is the occasional bloop (and paramour) in between, well, everyone has them, and that makes for an interesting story, too.

Poster for André Messager’s “Les P’tites Michu,” produced at the Bouffes-Parsiens in 1897.

And that’s what this book is: an enthralling story, set in a period and place in the world’s musical theatre which has largely missed proper coverage and investigation up to now. The tale of our man is peopled by such colleagues and friends as Fauré, Saint-Saëns, Massenet, Pierné, d’Indy (to drop but a few musical names) not to mention, latterly, the great Willemetz and Christiné, as we follow him through forty years of Parisian (mostly) musical history, with all its in-fighting, jiggery-pokery, cabals and ‘immorality’ …

Now, I know this era pretty well. I’ve splashed around in this Parisian music and theatre milieu for many, many years. And I’ve written quite a lot about some of its characters. But nothing like this!

This is a seminal and will-be-standard book. It will be – it must be – translated into German, Japanese and English (it’s written in French) – it is a classic biography and also a picture of an opérettic era that (as far as I know) has not ever been thoroughly covered anywhere else. And with some great pictures! 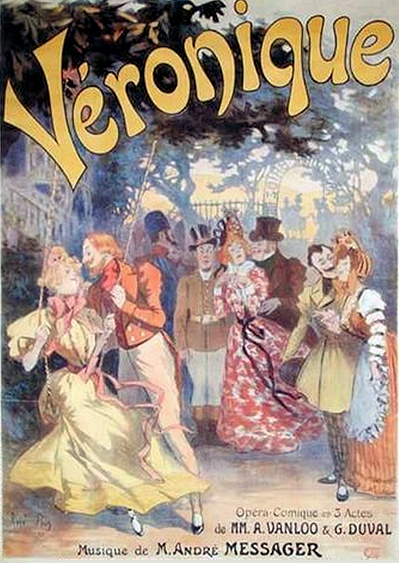 Poster for Messager’s “Véronique” advertising the original 1898 production. The illustration is by René Pean.

I promised I wouldn’t gush, so here are my thoughts on modern (theatrical) biography. And you can fit this one in, on the scale, where it you seems fit.

My opinion. At the two ends of the biographer scale, it seems, we have two ‘styles’. Firstly, what I call the academic thesis. ‘Well, I didn’t know much about him/her at the start, but I researched (other people’s often incorrect books?) and I got my degree and the University press published it! This works fine, sometimes: see Mr Koger. Mostly, it doesn’t, and I don’t like it. The authors don’t know the milieu, names of supporting characters in the Life are chucked about mindlessly, it’s a biography without a background. But with copious footnotes … argggghhhhh! (‘It’s not my fault if it’s wrong, someone else said it first’, ‘primary sources … what are they?’).

On my own very first book (2 volumes), my editor said to me: ‘if it’s not worth putting in the text, leave it out, if it is of interest, put it in the text body.’ I have mostly followed his wise words for forty years. Footnotes are a whacker’s way out.

At the other end of the scale, there is the non-academic. The person who has just immersed themselves in the time and period on which they are writing. This person knows who all those subsidiary folk are, and can hopefully tell us, if it is relevant, in a phrase. And such people know the flavor of the era, the feeling, as well as the facts …   Enough, you can tell from which side I am coming!

Anyway, all this to say that Mons Mirambeau has pretty well achieved the impossible here. He has encompassed both ends of the scale. 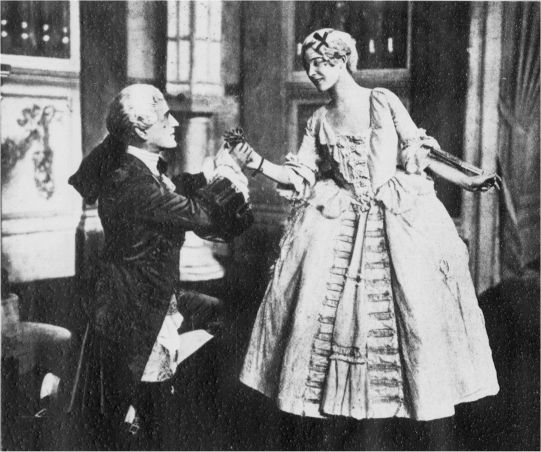 However – I know it’s the French way, but – I would have cut the footnotes in this book very, very largely. We don’t need biographical data of well-known folk detailed in footnotes. This is not a reference book. If you feel you must quote source, do it in text. Because all those footnotes (on one page there are two lines of text – shades of Louis Schneider! – and all the rest bloody footnotes) break up your great story, and murder the flow of your engaging writing …

I just skipped them.

What next? Without French footnotes please!