Many years ago, when I was collecting illustrations for my musico-theatrical books, I haunted e-bay. Bought something weekly. But then they changed. Got more ‘professional’. To make a purchase, you had to have a credit card (I don’t) or belong to that thing called Paypal (I won’t, and they refused me anyway) … so for the last 15 years I haven’t been an e-buyer. And won’t be. However, my friend A*** is a devotee. So I started looking at the listings again. Mainly to give him information on ‘who was who’. Because e-bay vendors are merely merchants: how can they be expected to know that the millionth Adelina Patti or Christine Nilsson ain’t worth tuppence, but that a plain-looking Mlle Géraldine, an Edward Connell or a Herbert Bond (especially when wrongly identified or labelled) is a wee treasure to we who know … 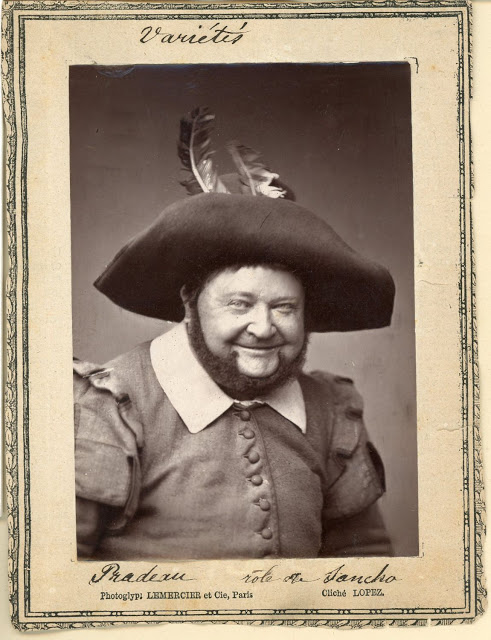 Fast Forward: Last night. I can’t remember which bit of teckery got me to ebay France. Ah, yes, an unidentified (but known to me!) photo of an original Parisian Offenbach cast member…  Well, I hadn’t been on French e-bay for ages, so I poured another glass and browsed. The French are much more knowledgeable, by and large, than the anglophones as to what and who actors and actresses are. And much better spellers. But their prices are ludicrous. Gone are the days when I bought CdVs for 50p. Now they ask 50 euros. So I wasn’t shopping: just window-shopping.

Nice things. Really nice things. I’d like the Dupuis, the Pradeau, the splendid Marie Cico which must have been taken just before her death of sexual misbehaviour… 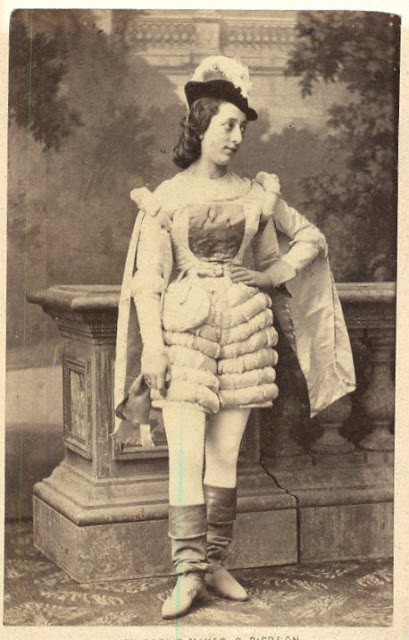 … and good heavens, is that Mlle Géraldine. I alerted A****.  Ebay alert! Rarity! 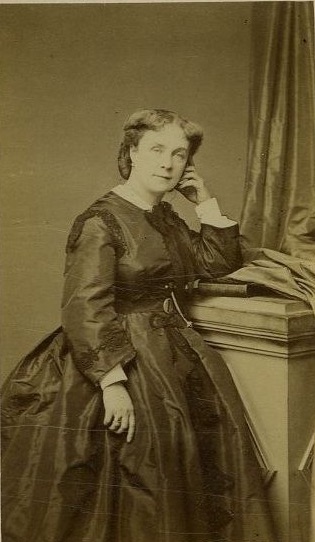 Mlle Géraldine was the creator of Offenbach’s Paméla in Le Voyage de MM Dunanan. Never had I seen a photo of her! 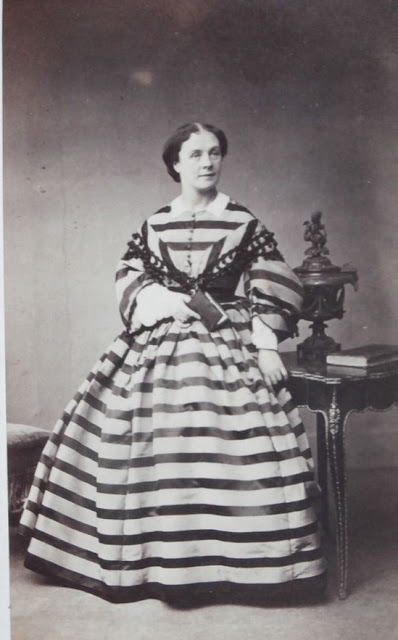 So I went looking on the web. Well, there are three photos of her (but not this one) in French museums. But with very little information on her life and/or career attached. So … I dug.

Who was Mlle Géraldine? It appears that the lady was born Clémentine Boudin. Well, you wouldn’t lie about that, would you? Orange Pudding? Nothing is ever ventured in the nosy French press of the mid-C19th as to her parentage or her family life, except that she bore a son in 1852 and married (before or, I suspect, much after) a ‘music publisher’.

Her early career, too, is misty. I see her in 1846 making a nervous wreck of La Part du Diable, before being hired to play in Les Chansons populaires de France at the Vaudeville. The press was not impressed: ‘a pretty enough voice … with practice, she might make a good understudy’. They weren’t about to find out. Someone died – father? mother? – and the young actress gave up her part.

The three-line entries in French ‘biographical dictionaries’ then tell us that she ‘went to the Opéra-Comique’. Wow. What they don’t tell us is that, after three well-received performances of Le Châlet, her three-year contract was terminated. She sued, the employer (state-subsidised, so what did he care?) didn’t even turn up in court … she got three years’ wages.

For a number of years, France didn’t see ‘Mlle Géraldine’. She was in Russia. I know no more. But she got sued later, in France, for unpaid bills for expensive gowns which she claimed were bought for her by a Russian Prince … well, we all know about ‘Russian Princes’ and French actresses … I guess this is where the son occurred. 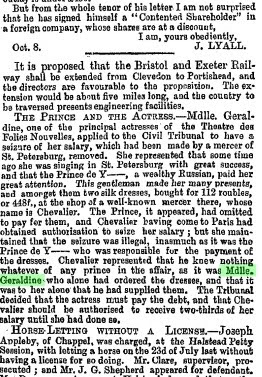 In 1856, she returned to France, where she became ‘première chanteuse’ at the adventurous little Folies-Nouvelles. The Folies-Nouvelles existed, as the law at the time insisted, on a diet of spectacles-coupés, and Géraldine created a mass of the little one-act, three-handed pieces that made up the programmes of the day, teamed with such famous-to-be players as José Dupuis, Joseph Kelm, Camille Michel and Tissier, singing the music of Montaubry, Laurent de Rillé … 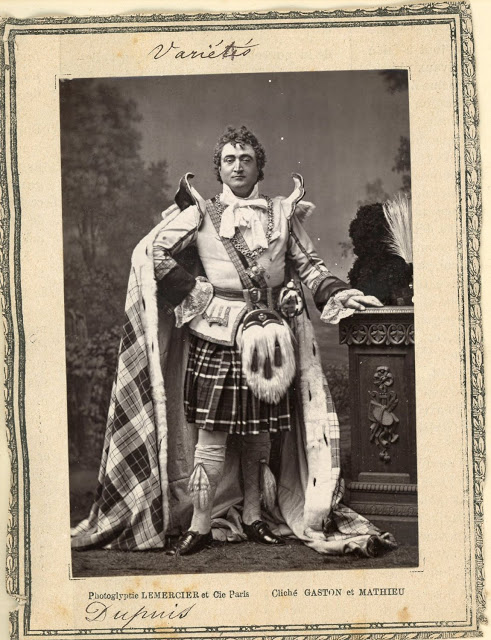 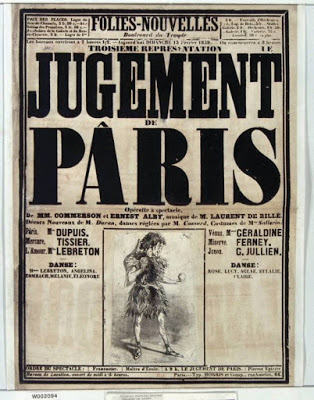 Advertisement for the “Jugement of Paris” in Folies-Nouvelles. (Photo: Archive Kurt Gänzl)

From the Folies-Nouvelles she moved to the Déjazet and thence to the Bouffes-Parisiens. I won’t detail her career at the Bouffes, except to say that it was there that, between pieces such as Une Fin de Bailand Daphnis et Chloe, she created the role of Paméla in Le Voyage de MM Dunanan et fils, and took a trip as leading lady of the Bouffes to Vienna, Amsterdam et al in loco Lise Tautin (Croquefer, Le Pont des Soupirs, Orphée aux enfers, MM Dunanan, et al). 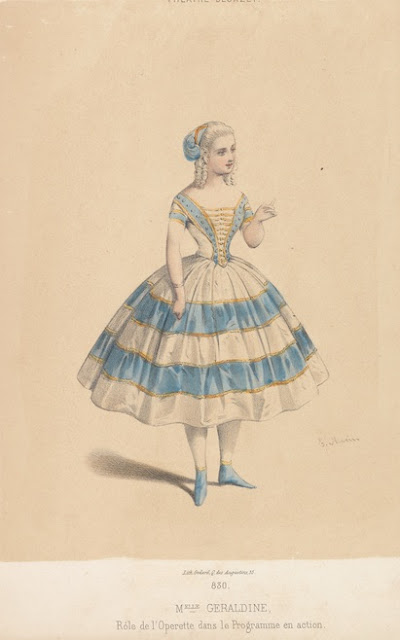 A picture of Mlle Géraldine in an operetta role at the Déjazet. (Photo: Archive Kurt Gänzl)

She continued at the Bouffes, while taking summers at such as Baden, and in 1866 took part in the major revival of Orphée aux enfers, playing Diana to the Eurydice of Lise Tautin. Then she took to the provinces: playing the Schneider-Tautin roles with huge success to Rouen, Nice et al, before, in 1869, she took a longer step and headed for South America. Valparaiso and Lima, it appears, got their first taste of opéra-bouffe from ‘Géraldine’. And they were bowled over … 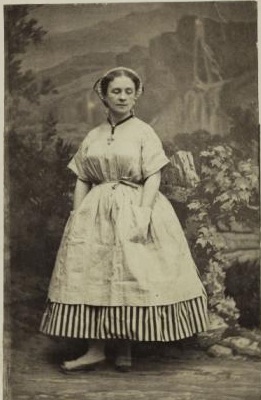 When she returned to France, she continued to work. I see her at Nice in 1875, playing Lange in La Fille de Madame Angot. After which …

I’ll chase up her ‘whatever happened to’ some day. But it’s nice to have a story to go with the photo, which is heading its way, as I write, to Australia.