So it was off to Waikiki and South Sea breezes, again. I had a chance to see Paul Abraham’s glorious Blume von Hawaii (1931) a second time within a month, in a new production at Theater für Niedersachsen (TfN) in Hildesheim, which is just south of Hannover. It could not have been more different than the student version in Osnabrück, and it highlighted some central questions – you might even say: problems – regarding jazz operetta today. How do you sing it, how do you stage it, how do you deal with the N-words in it? How do you recreate and transport that irresistible Weimar Republic buzz? And how can you attract a young and new audience with these shows? Obviously, there are many answers, and one answer the TfN gave is this: the original orchestrations of Blume von Hawaii are stunning when played by a large orchestra conducted by an expert such as Florian Ziemen. I had the feeling, throughout the performance, of listening to magic, to Technicolor splendor, to greatness. And that was a treat worth travelling for! 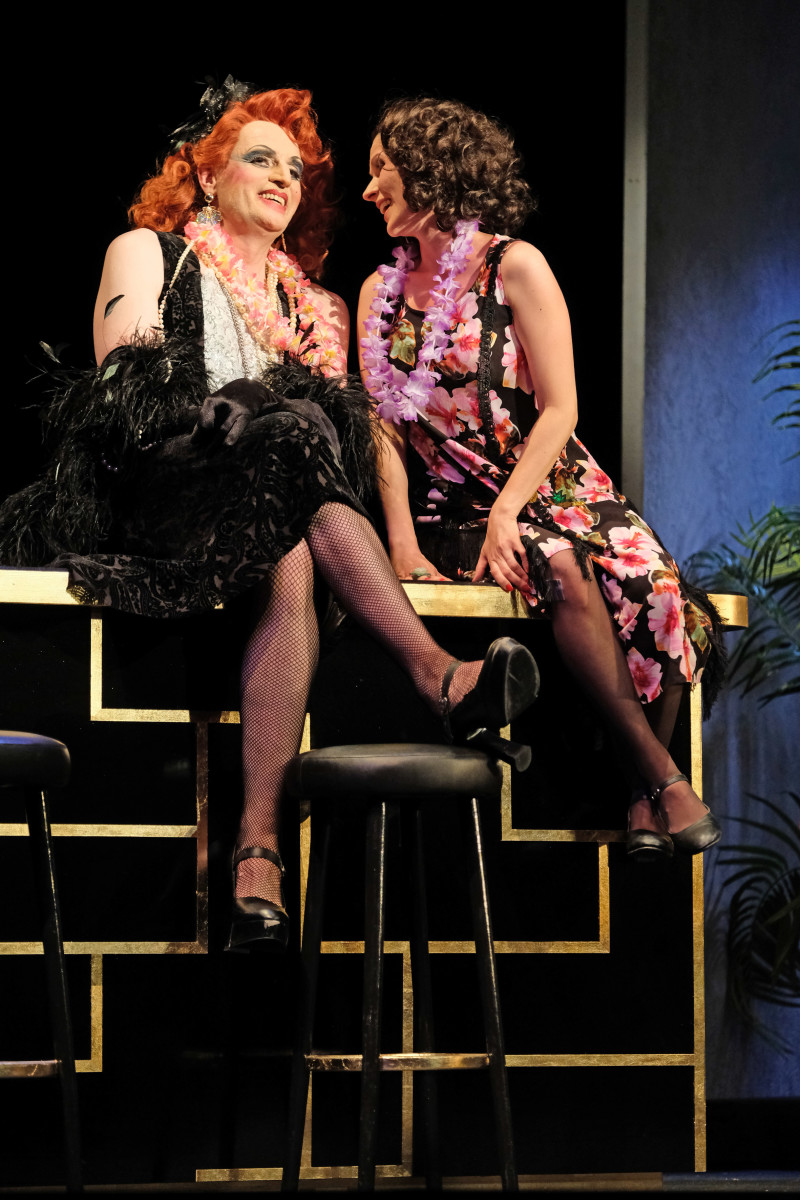 The TfN created a big black wooden cover for the orchestra pit, like Bayreuth’s festival theater, to help balance the acoustics. It worked. You could hear the various inventive orchestration details in the reconstructed Grimminger & Hagedorn version, yet the massive forces never drowned out the singers who did not use microphones. This, in itself, was a bonus and allowed the audience to experience Abraham’s music very differently than at Komische Oper Berlin or at the Theater Osnabrück where Abraham productions were/are ‘miked.’

In Osnabrück the young musical theater performers were sadly over-miked to the point of being acoustically annoying, yet they found a perfect style for singing this music with today’s voices but staying true to historic ideals. Berlin uses actors like Dagmar Manzel and Max Hopp, musical theater stars such as Katharine Mehrling, and opera people; so the results are varied, obviously. But there, too, a substantial stylistic update has been achieved, bridging the past and present in a convincing way. This is, in no small part, the result of the work of conductor Adam Benzwi. 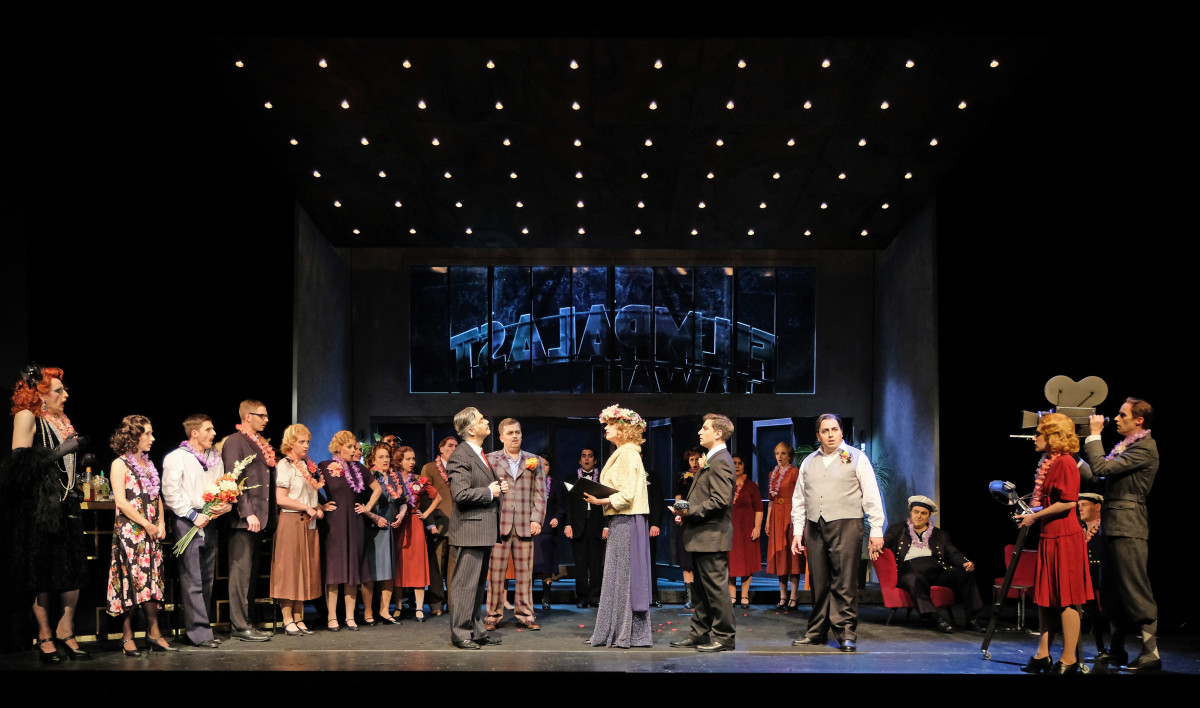 The ensemble in act 2 of “Blume von Hawaii,” set inside a cimena. (Photo: F. von Traubenberg)

In Hildesheim, I could tell that Mr. Ziemen as dedicated music director of the company had worked with all his soloists intensively. But they stayed opera singers nonetheless, switching to ‘operatic’ sounds where ideally a different form a singing is required. Especially in a small house such as TfN (or Komische Oper or Osnabrück, for that matter) it should be possible to find musical theater people who can get across an orchestra without a microphone. (Mr. Ziemen already proved this, years ago, with Vetter aus Dingsda in Bremen and his two male guest soloists, Alen Hodzovic and Nicky Wuchinger.) But if it’s not possible to find such people right now, then what? Mr. Ziemen is an advocate of unmiked performances; which I respect and understand. On the other hand, our own listening experiences have changed and what we hear on the old original cast recordings is a style more commonly associated with Broadway and miked performance practices. A decision which option you prefer very much depends on what’s important to you – a free and natural way of handling words and syncopations, or a more stilted style that approaches Abraham like Magdalena Kožená approaches Cole Porter on her 2018 album.

One rather substantial side effect of this discussion is the fact that many opera singers are not too convincing when they have to act, do dialogue, and dance. Their focus is: stand and sing. They seldom command the stage like Miss Manzel (who I could listen to, in dialogue scenes, for hours without ever wondering when the music starts again.)

In Tamara Heimbrock’s slightly austere production – set in a cinema that looks like it’s from the 1950s – the opera singers move well, for opera singers. But they never dazzle like Jonas Dassler or Vidina Popov, like Sarah Bowden, or … all the ‘stage animals’ that deliver all-round performances. I noticed that I closed my eyes, again and again, to fully enjoy the orchestral glories (of which there were many) and blend out the visual experience.

I also wondered how this performance might work on a recording, limited to only the musical side? In an ideal world, I would love to have heard most of the Osnabrück singers with the Hildesheim orchestra, in a studio with perfect sound settings.

I’ll leave any further comments about the cast and production at that. 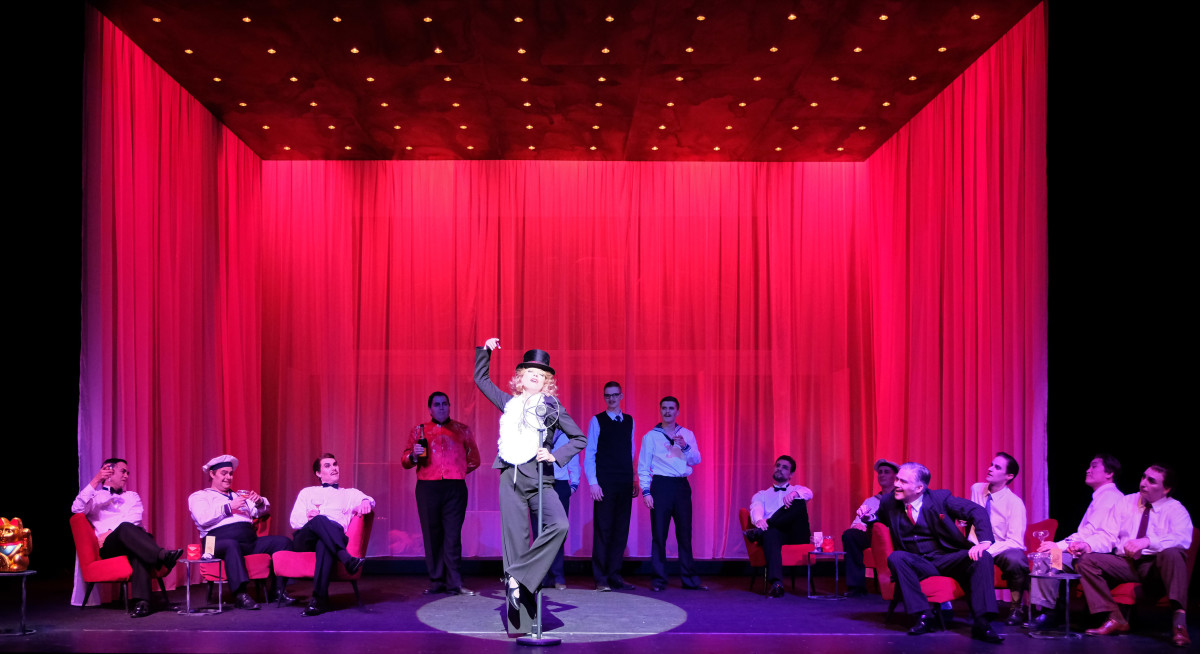 In Hildesheim, the interval was after act 2, not in the middle of it, as has become a new fashion that destroys the architecture of these operettas completely. (Mr. Kosky does it too, in Berlin, again and again, not just with Abraham, but also with Oscar Straus.) As much as I loved the sweep of the first part of this Blume von Hawaii (act 1 and 2), the last act became a strange experience because it was turned into a sequence of (added) solos without much logic and conviction. To give one example: Jim Boy (Uwe Tobias Hieronimi) was on stage all evening in drag, very dynamic and very convincing; yet at some point in act 3 he was in male attire for “Bin nur ein Jonny.” Why? What was the drag act for? Why does it stop? What does a La Cage aux Folles type of costume have to do with this character? (And was it the best solution to circumvent the black-face problem by having him cover only half his face with black paint?)

There were no answers, and it seemed to me as if the last part of the production fell apart. Whereas in Osnabrück I found the ending and the way the four couples find each other for the happy end touching and very witty. But maybe that’s just me being too sensitive.

Neele Kramer as Bessie and Ziad Nehme as Prince Lilo-Taro with ladies of the chorus in act 1 of “Blume von Hawaii” at TfN. (Photo: F. von Traubenberg)

One thing I noticed in Hildesheim: the theater was packed, attendance rate 98 percent. That’s astonishing for TfN, I heard. It was a mostly elderly audience, and from the conversations I listened to during the interval I gathered that many people knew and loved Die Blume von Hawaii from their childhood. The show was first produced in Hildesheim in 1931, shortly after the Leipzig/Berlin premieres. It was again done in Hildesheim in 1949 when the opera house reopened after WW2. The last production was in 1961/62. And now: a new approach for the new millennium.

The students from Hildesheim were not to be seen, perhaps the promise of Abraham’s jazz glories didn’t tickle their interest? Or word hadn’t spread after opening night on 5 May that this is an enjoyable spectacle dealing with aspects that can still interest us today, certainly with regard to racism (“Meine süße kleine Mango-Schnitte”) and a desire to escape harsh social realities by dreaming of “Links Hawaii, Rechts Hawaii”. My elderly travel companion to Hildesheim said – as a big Honolulu fan – the performance was ‘interesting,’ but lacking ‘bounce’ and ‘energy.’ I guess that sums it up fair and square.

And just as an advance warning: next season Adam Benzwi will come to Hildesheim and conduct a production of Offenbach’s Prinzessin von Trapezunt, directed by Max Hopp. Opening night is in March 2019. As for Blume von Hawaii, it returns next season for six performances. As I already said, it’s a musical treat worth travelling for, especially the extended (and complete) finali of act 1 and 2. Whether you’ll enjoy the performers on stage depends very much on what your ‘ideal’ Abraham and jazz operetta expectations are. The fact that so many people today are exploring so many different options is a treat, too. And to witness conductors and music directors like Mr. Ziemen invest so much energy and love in the genre is, of course, something worth treasuring.

The last word regarding a ‘perfect’ Abraham Blume von Hawaii hasn’t yet been spoken. Not even the 1933 film version is perfection; far from it. So I look forward to more and future experimentation. (And can someone, please, bring on the hula dancers again, instead of always cutting them first from productions?!?)

For information about the cast and future performance dates, click here.