„Friday Night is Music Night“: that’s the slogan of the BBC2 concert radio series. Last Friday’s concert was devoted to – are you ready for it? – great British operetta star and composer, Ivor Novello. Conducted by Richard Balcombe, it starred singers Wynne Evans, Sarah Fox, Charlotte Baptie and Lucy Williamson. Ken Bruce narrated the story of Ivor’s life and career illuminatingly. What’s best about the whole thing, however, is that you can listen to the live broadcast from the Mermaid Theatre in London for the next five days online, at the BBC2 archive. 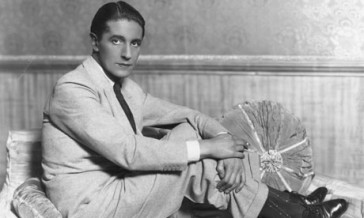 Ivor Novello: the image the BBC chose to advertise their concert.

After a dashing overture that emphasized the bouncy aspects of Novello’s dance tunes rather than the expansive lyrical side of his music, Sarah Fox delved right into “Glamorous Night”, followed by Lucy Williamson’s comedy-style and touching rendition of “You Have to Get It Right On Opening Night” from Gay’s the Word. (No, Bruce did not make any remarks about that title, which is a bit of a shame.)

Because the two-hour program on Novello – who went to see The Merry Widow 27 times as a teenager – was devoted to “Ivor and Friends,” you also get some dazzling excerpts from Noel Coward, Vivian Ellis & Co., a Bitter-Sweet medley among them.

It’s a joyous affair, all in all. The orchestra arrangements are effective, though not original.

The singers sound well via microphone, even if some of them lack star quality and character (e.g. Welsh tenor Wynne Evans, who slightly overdoes the “sentiment.”) But they all seem to have fun. And: There will be a second part to this concert this week Friday. It will also be available online, as a live stream on BBC2, but also as a seven-day “on command” file in the archive.

You need to skip the news at the beginning. And wait for the fascinating historical feature in the interval, with an expert from the Imperial War Museum talking about Novello’s music in WW1.

Hopefully, the BBC will release this concert as a CD later. It would be a very welcome addition to our operetta discography.