Charles Amberg (1894-1946) is not exactly a household name today, and even dedicated operetta fans will be hard pressed to name an operetta he was involved with. This is somewhat surprising considering that Amberg wrote quite a few famous songs, among them Ich reiß’ mir eine Wimper aus (und stech’ dich damit tot) with music by Fred Raymond (1928) or Mein Bruder macht beim Tonfilm die Geräusche (1930), a Max Hansen classic. He also wrote several shows that have recently been rediscovered on a grander scale, e.g. Clivia (1933) with music by Nico Dostal, or the revue Schön und schick for Hermann Haller which includes the Lea Seidl hit “Ich bin die Marie von der Haller Revue.” Now, a new 130-page biography just came out. 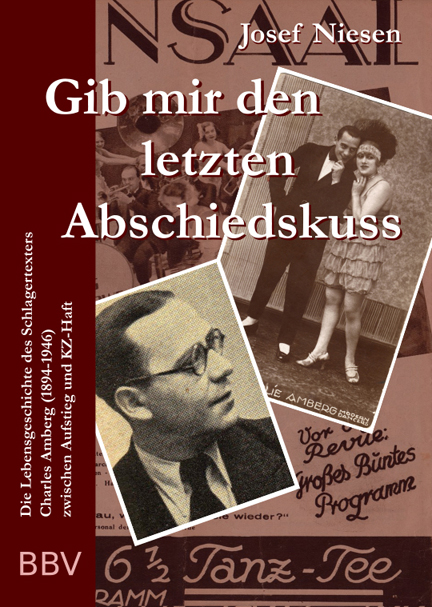 Cover for the 2017 Charles Amberg biography by Josef Niesen.

Little is known about Amberg’s life, even though he was regularly featured in newspaper articles back in the 1920s and 30s. While it’s fairly easy to reconstruct his professional career, it is nearly impossible to say anything about his personal affairs – except that he was put in a concentration camp in 1944, even though he was neither a political activist nor Jewish.

Josef Niesen, in his biography Gib mit den letzten Abschiedskuss (“Give me the last farewell kiss”), published by Bonn Buch Verlag, approaches the Amberg vita from a gay perspective, probably because there have been rumors about Amberg being homosexual forever, mostly based on the fact that he wrote one of the most famous homosexual songs of all time (Ich reiß’ mir eine Wimper aus),to which Ralf Jörg Raber dedicates a whole chapter in his 2010 book Wir sind wie wir sind. Ein Jahrhundert homosexuelle Liebe auf Schallplatte und CD. Niesen quotes extensively from that chapter. He also discusses the other “gay” song, Hello, hello, which Amberg wrote for Gabriel Formiggini in 1927, it was created for and performed at the legendary Berlin gay bar Eldorado.

Niesen chronicles the few facts that can be found – from Amberg’s birth near the city of Bonn to his early marriage to an older woman called Anna Hermine Friederike Rohne in 1920, from his career as a lyricist of 1920s nonsense Schlager to his revues and operettas in Nazi times. He then presents the minimal facts we have about Amberg being taken to KZ Neuengamme, from where he was released again, only to die shortly thereafter in Berlin of cancer in 1946.

Niesen does not go into a any deeper discussion of the individual works, so there are no historic reviews of the hit songs, revues, movies, or operettas, and no modern appreciation of them either. Niesen focuses only on the life. And he is very careful with his homosexual interpretation of that life. He weighs the facts before the reader and presents the pros and cons, ultimately asking why Amberg did not claim financial compensation for his time in a concentration camp after 1945, as nearly everyone else in such a situation did – was it because Amberg knew that as a homosexual he wouldn’t have gotten money?

Niesen’s sketch of Amberg’s life is short, a mere 40 pages in the book. The rest are expansive listings of songs and shows, including various wonderful photos. This is obviously not the ultimate Amberg biography that answers all questions and gives full insight into Amberg’s artistic achievements. Instead, it’s a labor of love, kept as neutral as possible, and possibly intended as a cue for others to follow this up with more in-depth analysises of their own. There certainly is enough to analyze, from the revues and films to the operettas. Some of them, such as the 1941 perfume operetta Kölnisch Wasser (music: Willy Richardtz) are camp classics and deserve a closer look, not just by the gay community in Cologne or the perfume industry.

The Niesen book is a first attempt to rescue Amberg from obscurity and to not allow posterity to forget about someone who was once so active and successful, only because he was forced to erase all traces of his personal life. Erik Charell did the same thing, as did many others. (Remember Siegfried Wagner?)

It’s time for a bit more speculation and public representation to kick-start the discussion on Amberg once more. The recent success of his Clivia in Berlin and elsewhere, but also the recent renewed interest in Ich reiß’ mir eine Wimper aus, which was inserted into the Maske in Blau production in Stendal, should be reason enough to continue the research. And also to acknowledge the greatness of Amberg and the modern LGBT appeal of his songs and shows.