He was one of the “hottest” male stars in operetta history, he made ladies in the audience swoon with his flesh coloured tights in the production of Adonis, a boylesque retelling of the famous Galatea saga that Franz von Suppé had used for his legendary one-act show in Vienna. Broadway offered Mr. Dixey as an emancipated male alternative.

In her article “Boylesque in a Nutchell” Trixie Little writes: “The very first performer qualified as Boylesque, is known as Henry E. Dixey, an American actor who began to act in the play Adonis in 1884, in which he had the role of a Knight statute. The sculptor, a woman, was so proud of her work that she fell in love with it and refused to give it to the duchess and her daughters who had ordered it. As they couldn’t agree on who would keep the statute, they decide to bring the knight to life, so he could decides with who he would like to live. Then begins the high life for him, but disappointed by it, the gentleman decides he wants to stay a statute. The play was played more than 600 times on Broadway, which was the longest run for a play at the time. The vision of the actor’s legs in his tights, which was quite unusual then, was a part of the success of the play especially among women.

If Henry E. Dixley was representing the perfect gentleman, the one I’m going to talk about represents the primitive male. 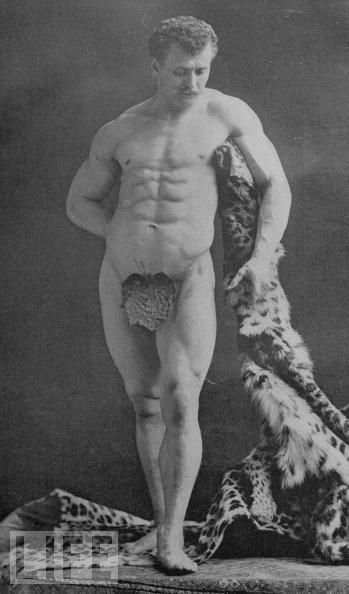 Indeed, Eugene Sandow was the very first male to perform what is now called Body-building. Florenz Ziegfeld (he was the one who brought High Society Burlesque on Broadway, remember?) after he saw one of Sandow’s performance, wanted him to perform at the 1893 World’s Fair in Chicago (the one where a certain Little Egypt performed her Seven Veils dance for the first time). Ziegfeld then realized it wasn’t the weight Sandow could hold (two man with one arm which is not bad) but the ballet of the contractions of his muscles. So Sandow began to perform in very private performance called ‘Muscles Exhibitions’ in which Sandow wearing only a leaf where it had to be worn, and after bathing in a glass cold bath used to walk in the audience so they can watch, touch and discuss about the muscles of the man who would soon become a pioneer and who is considered the first Ziegfeld star.”

Out of all this developed, much later in the 21st century, modern “boylesque” or neo-boylesque. Which, in times of gender equality, seems the right thing for the right era. It makes it worth remembering Adonis and Mr. Dixey. But who was Henry E. Dixey? Here is the article from Kurt Gänzl’s Encylopedia of the Musical Theatre. (Where else would you find these things?) 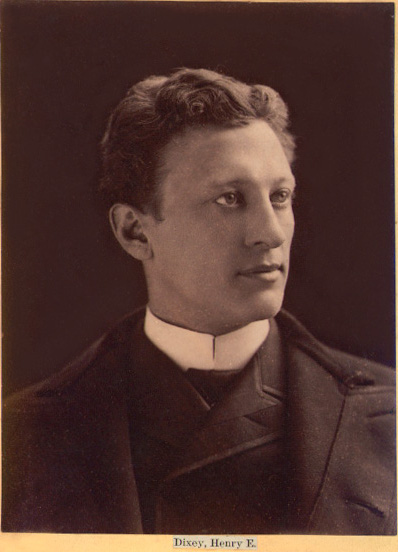 Henry Dixey was born in Boston, 6 January 1859. He was a musical burlesque and comedy star, who won enduring fame in the long-running Adonis. He began his career as a boy actor at Howard’s Athenaeum in Boston and made what he always counted as his adult début as half-the-dancing-heifer in E E Rice’s 1875 Boston revival of Evangeline. He subsequently played a variety of supporting rôles in the touring company of Evangeline, in the burlesques Le Petit Corsair (Syng Smaul, Yussuf, and Mdlle Henriette Dixette with a ‘grand pas de pâté de foie gras’), Robinson Crusoe (Whatdoyousay) and Hiawatha (Romulus Smith), and in the entertainments Revels (1879, Sir Ramsgate Bramblewig, Professor Inkijab) and Horrors (1879, The Jester, Rajah Zog) played by Rice’s Surprise Party company of musical farce-comedians, and made early Broadway appearance with the company in The Babes in the Wood, (Doctor, Tommy) and in Horrors at the Union Square in 1879. He toured (1880) with Fred Stinson’s Co in Evangeline, Babes in the Wood and other extravaganzas, appeared on Broadway with the Boston English Opera Company as the harem-keeper, Mustapha, in Fatinitza at Booth’s Theatre (1880), and in Boston as Major General Stanley (Pirates of Penzance), Sir Muslin Delaine in a pirate version of Billee Taylor (1881), Sir Joseph Dublin Porter in a Reconstructed Pinafore (1881), Dr Syntax in Cinderella at School, and as William Crank in the original Boston musical Pounce & Co (19 April 1883). His first major Broadway engagements came in 1883 when he was seen at the Fifth Avenue Theatre playing J H Ryley’s rôle of the Lord Chancellor opposite the original American Iolanthe, Marie Jansen, and, paired with the same lady star, as the comical monarch, Laurent XVII, in La Mascotte.

He appeared thereafter in further leading musico-comic rôles as Sir Joseph Porter, Sir Mincing Lane in Billee Taylor, Peter Papyrus in The New Evangeline, partnering Louise Lester as the comical horse-dopers of the English musical The Merry Duchess, as Frippaponne (with Henry Irving impersonation) in Rice’s Captain Hélène of the Guards and as John Wellington Wells in The Sorcerer, and in 1884 his long-time employer, Edward Rice, provided him with the plum part needed to turn a lead comedy actor into a popular star when he produced the burlesque Adonis at the Bijou Theatre with Dixey in the leggy title rôle. 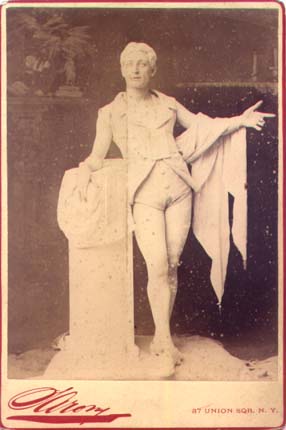 Henry Dixey as the marbel statue of Adonis.

Adonis, a sort of Die schöne Galathee with the sexes reversed and liberally decorated with a movable set of songs (`It’s English, You Know’, `I’m Nobody from Nowhere’, `The Wall Street Broker’) and burlesque scenes, had a record-breaking 19-month run on Broadway, returned there from its road travels regularly over the next decade, and was also played for a summer season at London’s Gaiety Theatre, in each case with Dixey — tight white-tighted and dripping with diamonds — in the very large central rôle which had made him famous. His appearances thereafter ranged from classic comedy to a variety of star vehicles, most of which were musical, including a revusical piece called The Seven Ages (1889), a spectacular burlesque Rip van Winkle which didn’t get out of Chicago (1890), a modernised Adonis (1893), revivals of Patience, Iolanthe, La Mascotte and The Sorcerer, under his own management, and all-star Gilbert and Sullivan at the Herald Square Theatre in 1896 in which he was seen as Sir Joseph Porter and Bunthorne.

In 1897 Dixey was presented on Broadway by Edward Bloom in a different guise — he appeared at the Garden Theatre as ‘Dixey the Magician’ performing an illusion act — and in that same year he also took for a while to the music-halls, purveying a quick-change act (The Mystery of the Mortgage), but musical theatre still provided him with most of his employment.

He appeared in In Gayest Manhattan (1897) at Koster & Bial’s and in the revusical Mr New York Esq., (1897) at Weber and Fields’ and in this second he was put once more into the famous Adonis white tights.

This allowed the press (and the public) to observeand that his pins were, if still nimble, not as shapely as before. Neither was he now sporting the famous ‘Adonis diamonds’ which had been such a crowd-pulling item 16 years earlier. They had long been pawned to producer John Stetson, and the following year they would be newsworthily stolen. Dixey toured in 1898 with Hotel Topsy Turvey (Lebeau), paired with Francis Wilson as Ravannes in a revival of Erminie, the show which (depending how you count) had deprived Adonis of its long-run records, and in 1900 (having just gone round once more with Adonis) he had his first modern musical comedy rôle when he took a turn as Peter Stuyvesant in Luders and Pixley’s long-touring The Burgomaster. 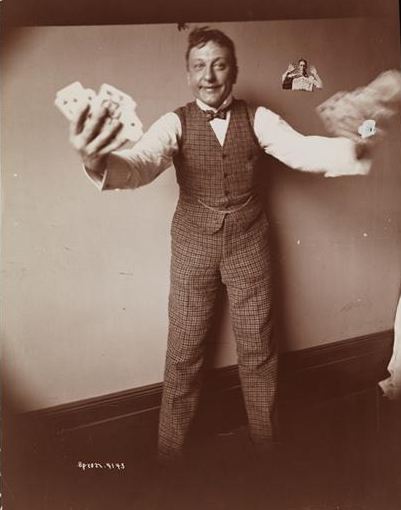 He visited London in 1901 and appeared at the Adelphi Theatre in a version of the New York revue The Whirl of the Town, but on his return to America appeared almost entirely in plays (including Barrie’s Little Mary) and in sketches, musical (Castle Romance 1914 &c) and non-musical, in vaudeville, returning to the musical stage only in 1917 to play Courtice Pounds’s rôle of Ali Baba in the spectacular Broadway production of Chu Chin Chow. He later played alongside Fay Marbe and Vivienne Segal in the out-of-town tryout of Ivan Caryll’s Little Miss Raffles (1921) and made his final appearance on the musical stage in 1928 when he replaced George M Cohan in Cohan’s own The Merry Malones.

Dixey produced a number pieces, mostly revivals, usually in alliance with Rice or with the firm of R E J Miles and Barton (The Corsair), and made sufficient contribution to the eternal remaking of the text of Adonis to be sometimes credited as its co-author.