The DVD L’eternel enchanteur is no compilation of movie fragments as the titles on the sleeve notes seem to suggest. On the contrary, there is not a single fragment  from Luis Mariano’s well known blockbusters (at least in France and Wallonia) to be seen. All songs (mostly derived from the popular show operettas of Francis Lopez) and interviews were recorded either in the late 1950s or in the 60s during various TV shows. Most are in black and white and thus in very good picture quality, as film doesn’t deteriorate as bad as does video. 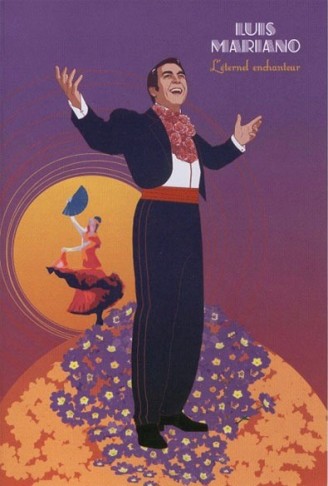 At the time Mariano was not young anymore, and with the poor lighting of those days some excepts make him look old and worn. Of course a life on the road (literally for some years) had taken its toll, but still one can hardly believe he was still playing the dashing romantic operetta hero when one sees his small tired frame at the age of 52.

He died at 55 of a heart attack in 1970, when it was revealed that he actually was five years older than he had always told. For a change, the reason for that was not the usual tenor vanity, but instead the Spanish Civil War. His mother had falsified his birth date so that none of the two parties would try to enlist him.

At the time of these recordings, Mariano already had a long and murderous career behind him.

No way an operetta tenor could limit himself to two performances a week; five or six was thought not to be unreasonable. Still, the famous voice is almost intact; the penetrating sound or the somewhat artificial Spanish accent included.

Some of the interviews on the DVD reveal his accent was far less obtrusive after so many years in France. Mariano sings with a good legato and sense of rhythm, so necessary in Lopez’s tunes. Only in his late performance of Le prince de Madrid he flattens from time to time. His age however shows at the top. In these live performances he eschews the brilliant high C’s or D’s he always interpolated in his heydays.

I have always wondered if they were true and if there was no engineer helping him out and amplifying his high notes which sometimes had a hint of falsetto in it.

I admit I have not the slightest idea how he sounded in the flesh (and without a mike). At the end of his career ‘le rock and roll’ had taken over France as well and Mariano was considered to be old hat; just good enough to sing for well-to-do middle aged ladies. He had even to sing every night in the famous French circus Medrano and I could easily have heard him if I wanted as the circus often appeared at the Flageyplein in Elsene in front of Flemish Public TV where I worked. I was too young and thus too conceited to go and listen to him but it is clear from these songs that he was the real thing: a classically trained singer (far more talented than Bocelli) who didn’t look down upon charming ditties: in short, France’s answer to Mario Lanza, though of course Mariano never had the phenomenal gifts of the American tenor.

I remember how some 15 years after his death there was an evening devoted to him at Antenne 2 (French Public TV) and a wave of nostalgia went over France. For many years the programme held the record for viewer ratings. Those who want French charm, lively tunes and a splendid voice would do well to pick up this DVD.

To read the original article on Operanostalgia, click here.