It’s a breathtaking spectacle of nature: the Erzgebirge, the rough East-German mountains near the Czech border. In the midst of some massive rocks lies the so called “Naturtheater Greifensteine,” a stage in the middle of the woods in operation since 1952. There, for many summers now, the opera company of Annaberg-Buchholz has presented open-air performances; usually operettas. This year, it will be a revival of Millöcker’s Gasparone. 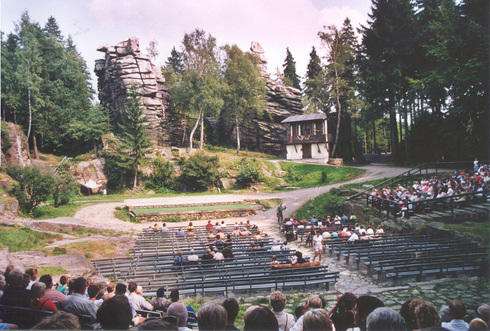 The production is by Hans-Hermann Krug, conducted by Dieter Klug. You might remember Mr. Klug because he was in charge, musically, of a very good – and very rare – Student Prince production in his theater two years ago which attracted media attention for all over the country. Just like many of the other rediscoveries the theater regularly offers attract opera fans from around the world.

A revival of Gasparone might not be in the top category of “rare” titles worth travelling for, but the location where this Gasparone is performed certainly is worth a trip. The location is also near ideal for the story of bandits on the run – and running after lovely ladies.

Performances run through to the end of August. For more information, dates and tickets, click here.