Director/choreographer Randy Skinner’s production of the 1968 Off-Broadway charmer – a delicious take-off on those Busby Berkeley musicals of the 1930s – has been accorded an utterly delightful, ultra-stylish revival. One might have thought that all these decades later, audiences who could actually remember the movies being spoofed would have largely died off, devotees of TCM notwithstanding, and that the whole enterprise might feel hopelessly dated, but not so. And I’d venture to say that even for audiences unfamiliar with the genre, Dames at Sea will provide bountiful entertainment. 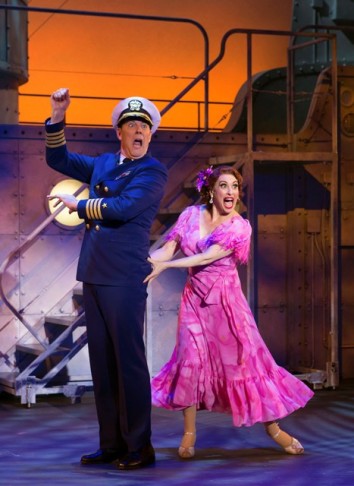 John Bolton and Lesli Margherita in the 2015 “Dames At Sea”. (Photo: Jeremy Daniel)

This is the show that put Bernadette Peters on the map. She played Ruby (as in Keeler), the small-town girl who lands a part in the chorus in a Broadway show the day she arrives in New York, and by evening finds herself replacing the temperamental star. Peters had just appeared in a similar Hollywood spoof, Robert Dahdah and Mary Boylan’s charming “Curly McDimple,” playing the Alice Faye prototype. And Dahdah was, in fact, the first director of Dames at Sea in its earliest incarnation.

Eloise Kropp, a completely different physical type than Peters (in fact looking rather disconcertingly like Cherry Jones), takes the role here and makes the part her own. And the other roles have also been cast to perfection. There’s Cary Tedder as Dick (Powell), the small-town sailor who loves Ruby, and also happens to be a songwriter with Broadway aspirations. Mara Davi is Joan (Blondell), the good-hearted gal who befriends Ruby. Danny Gardner is Lucky, the sailor sweet on Joan. All of them are terrific dancers.

John Bolton, channeling Warner Baxter in 42nd Street, is the Type A director ceaselessly yelling at Ruby to pick up her game, go onstage and, eventually, save the show. He also doubles as the captain of the battleship where, with their theater victim to the wrecking ball, the musical must ingeniously relocate. And, above all, there’s Lesli Margherita as vain star Mona, milking every bit of show-stopping schmaltz out of her torchy “That Mister Man of Mine,” and later, hilariously channeling her inner South American in her second act duet with the equally droll Bolton on “The Beguine.”

You have to keep reminding yourself that there are only six performers on stage, so deftly is the show blocked. Skinner’s staging is endlessly inventive, honoring the simplicity of the original but adding plenty of 2015 panache to such numbers as “Raining in My Heart,” “Singapore Sue,” and “The Echo Waltz.”

Jonathan Tunick’s spot-on parodistic orchestrations (heard first on the cast recording, as the original production had only two piano accompaniment) have been augmented with fine vocal and dance arrangements by music director Rob Berman.

Though, in theory, Broadway would seem a reach for such an intimate show, Anna Louizos’s ingenious designs, David C. Woolard’s dazzling costumes, Ken Billington and Jason Kantrowitz’s cheerful lighting and the clean sound design by Scott Lehrer give it the requisite first-class production values for the Great White Way. The choice of the intimate Helen Hayes Theatre is, of course, another asset. The opening black and white Warner Brothers credits are a special delight. 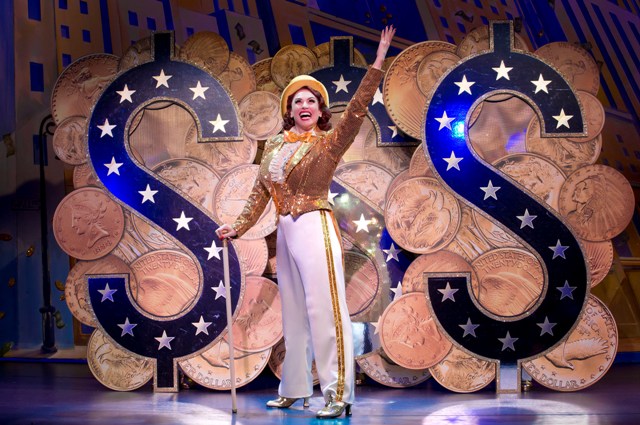 It must be acknowledged that the original property – music by Jim Wise, and book and lyrics by George Haimsohn and Robin Miller – shows itself to be still very viable, and one admires anew its economical construction. So, too, the songs are perfect parodies of those Harry Warren/Al Dubin songs, but stand well on their own, too. The rapturous audience response at the end made me think that perhaps it’s time to bring back those other period genre spoofs Little Mary Sunshine and The Boyfriend, provided, that is, that they’d be in the same sort of accomplished hands as Dames at Sea is here.