Yes, here it finally is: the original cast album and DVD version of Grimm. This fairy tale musical, with some strong operetta moments and various retro-style songs by composer Thomas Zaufke and author Peter Lund, has taken Berlin by storm. It recently won the “Deutscher Musicalpreis” for “Best Book” and rave reviews for its young cast and staging by Mr. Lund at the Neuköllner Oper. After a first round of performances in the spring, the production is now back, accompanied by a recording and film version. 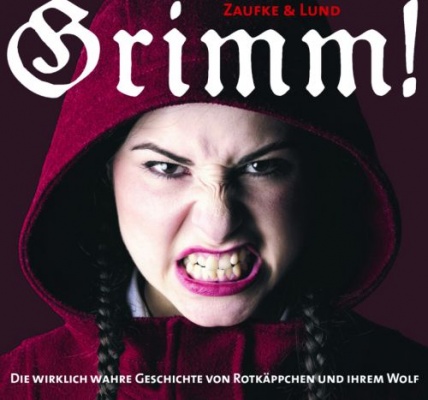 The original cast album of “Grimm.”

You might initially think the whole thing is a variation of Sondheim’s Into the Woods. Which, in a way, it is. Grimm is also a mix-up of various fairy tales. But the aim is a different one: the authors want to show how characters should learn to break free from conventions and accept diversity and otherness, in the widest possible sense. Grimm tells the story of farm animals vs. animals living in the forest. The farm characters are terrified by the wild life they don’t know, and the wild animals think farm animals are a boring and backward bunch. The action is kicked off by Red Riding Hood (Devi-Ananda Dahm) going where she shouldn’t – and meeting a hunky Wolf (Jan Rekeszus). The friendship and new-found love between the two of them poses many questions: can humans and wild beasts be partners? Can forest animals and farm animals happily coexist without killing one another? The neo-fascist pig “Schweinchen Schlau” (Fabian-Joubert Gallmeister) is the evil mastermind who tries to keep the groups and “races” apart and his farm fellows under strict control. But he cannot stop new ideas entering his farm society. And once they have entered, nothing is ever the same again. This might sound a bit didactic, but it works outstandingly well because of the very humorous way the lesson is presented by Peter Lund.

Thomas Zaufke has written a string of songs in various retro-styles: there are Charleston numbers (“Du bist nicht allein auf der Welt”/You’re Not Alone In This World), swinging Andrew Sisters style songs (“Leben mit Wolf”/Life With A Wolf), grand operetta moments (“Der Schwein-gehabt Walzer”) and some contemporary ballads (“Du bist mein bester Freund”/You Are My Best Friend). The cast of ten – all students of the UdK Berlin – is breathtaking. They manage to characterize each figure with such brilliance and energy that it is a joy to listen to and watch them. Every one of them. Especially the many big ensemble scenes are striking, thanks to the effective choreography by Neva Howard. 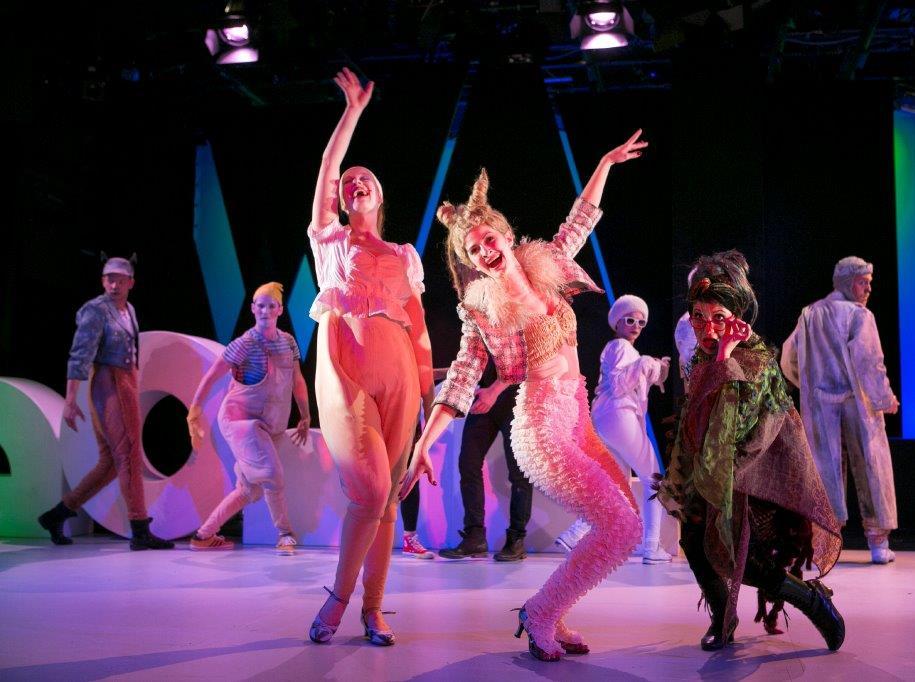 The voices are all young, and mostly not fully developed yet. But there is also some surprising maturity to be heard. Sophia Euskirchen commands a husky mezzo that stands out in a million. Her rendition of various solos is a highlight, certainly on disc. Next to her, Anthony Curtis Kirby as the quirky dog Rex has the most recognizable male sound, which he uses to maximum effect in “Ich hab’ Blut geleckt”/I’ve Tasted Blood.

In the central roles of the wolf, called “Grimm”, Jan Rekeszus demonstrates leading-man qualities that recommend him for a great future career, which will hopefully include operetta too. His expansive baritone vibrates with self-assured masculinity and suave top notes.

And he’s beyond charming on stage as the lone wolf looking for friendship and love; and something to eat. He doesn’t actually find lasting love with Red Riding Hood. At least not on a workable living-together level. But: there are two other love affairs told in Grimm, both of them involving same-sex relations, that are heart-warming. Dennis Hupka is the enamored Schweinchen Didi who falls head over heels for the (straight) wolf and gets a scene with him that is my personal favorite among many favorites. And then there is the lesbian pairing of Schweinbachen Dicklinde (Feline Zimmermann) and Schweinchen Wild (Kiara Brunken). Their operetta waltz in the mud – with a full moon shining above – is something that needs to be seen to be believed. It’s beyond beautiful. And their happy ending is the real climax of the show. (Okay, Didi/Hupka and Grimm/Rekeszus get one that tops it, ever so slightly.) 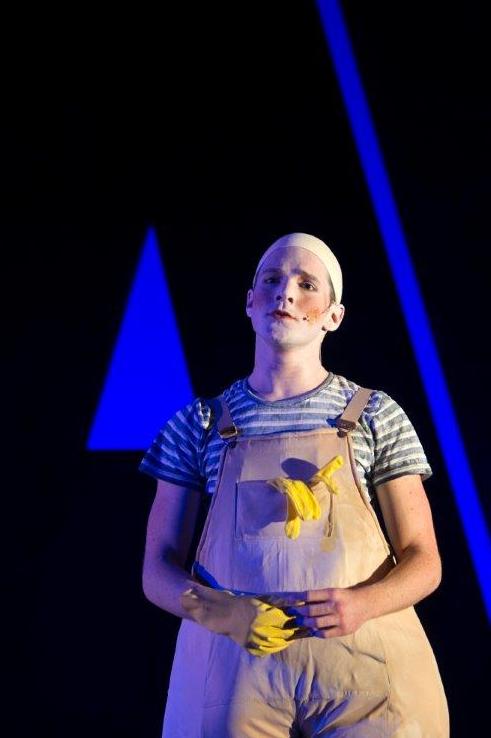 Other stand-out performances are Katharina Beatrice Hierl as Mother Goat, singing a furious tango in which she tries to seduce the wolf. And then there is Dennis Weißert who manages to believably play the old watch dog Sultan, and even sing with a believably ‘aged’ character voice.

These ten high-voltage performances come across well on disc.

The only minor criticism could be that few of the singers have secure top notes that are delivered with focus and ease. Given their age, I assume these young artists will learn how to handle the top range of their voices better once they leave the UdK. But on the whole, they all sound great and quirky, and lovable. (There are not that many top notes in the score to pose a serious problem.) 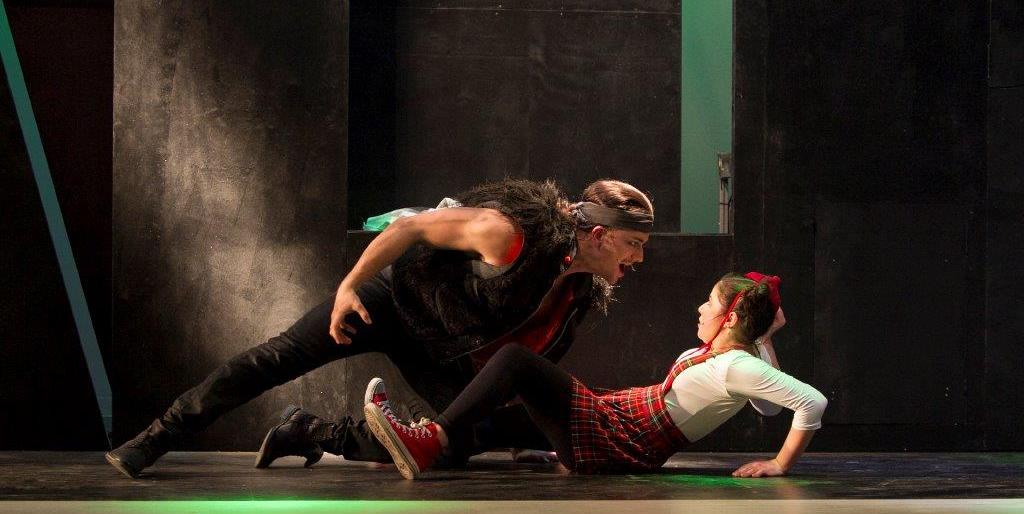 The DVD, which is only sold at the Neuköllner Oper directly, is not as opulently packaged as the disc. It’s a straight forward filmed version of the stage performance, without any special editing or camera work. But it’s wonderful that, for the first time, the Neuköllner Oper has filmed one of their productions at all. English speaking viewers will be disappointed that there is no option for English subtitles, which makes it difficult to follow the action if you don’t speak German – you will miss all the witty lines Peter Lund has written. Also, there is no booklet. The booklet of the CD, on the other hand, gives a full synopsis. But again, only in German.

If you don’t know what to do for Christmas, watching or listening to Grimm on DVD or CD might be an option. Of course, the best thing to do is see them all live on stage, before the production closes on January 2, 2016. But I’m sure we’ll hear more of all the actors on this cast album in the near future. Such talent is bound to make a big splash! 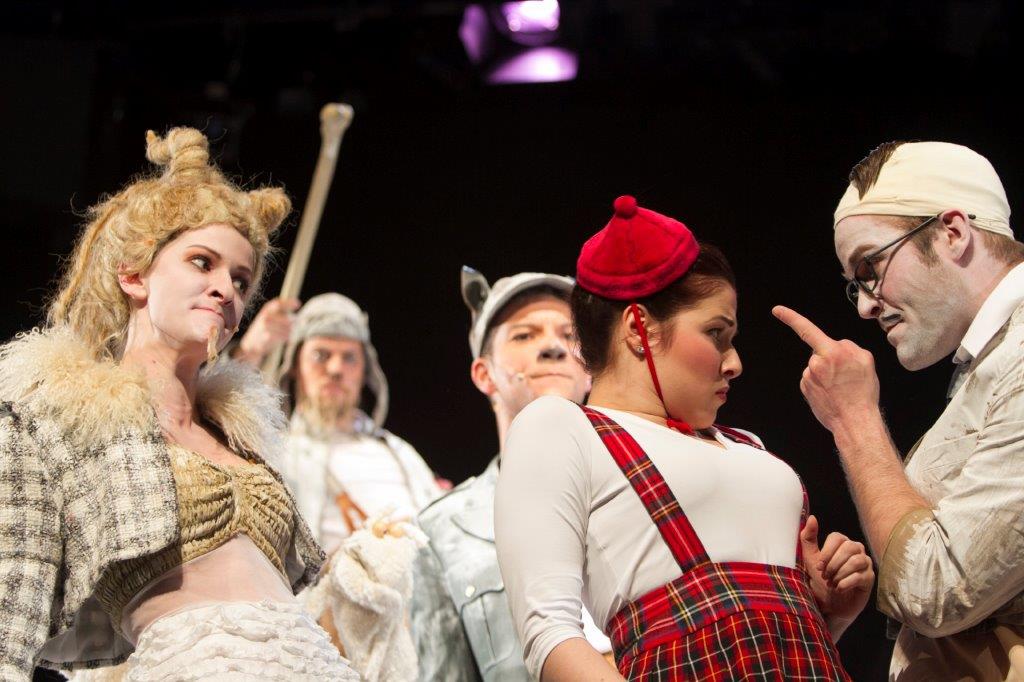 To order the DVD (20 Euros), you can send an email to info@neukoellneroper.de. The CD is available through the web shop Sound of Music. Be aware that the video clip there is from the Graz world-premiere, not from the Berlin production.

And be warned: you’ll be singing the catchy songs for days after.

Here is a video blog by Kiara Brunken about the backstage activities of this revival, i.e. you can see all actors without their Grimm costumes in rehearsal. And in full swing. Quite exiting!