The most widely successful, and also one of the most enduring, of all pasticcio musical plays, from The Beggar’s Opera to Kismet, Das Dreimäderlhaus was put together by composer by Heinrich Berté, around a sentimentalized version of the love-life of composer Franz Schubert, invented by the German author Bartsch in 1912, under the aegis of producer Wilhelm Karczag of the Raimundtheater. According to one version of the story, Karczag heeded the suggestion of publisher Emil Berté that his out-of-luck composer brother, Harry, be given the opportunity to write the score to the libretto Willner and Reichert had drawn from the novel. That story goes on to tell that Karczag rejected the first score which Berté provided, as the composer had included too much of his own original music and insufficient bits of real Schubert, but the final result, even if it and its success perversely hurt the touchy composer’s pride, proved a masterly transformation of gold into gold. The first night was on 15 January 1916 at Vienna’s Raimundtheater.

Scene from the Richard Oswald film version of 1918.

Poor composer Franz Schubert (Fritz Schrödter) meets Hannerl Tschöll (Anny Rainer) when she comes to chaperone her two sisters, Haiderl (Else Lord) and Hederl (Vally Ernst), to a rendezvous with their boyfriends, Bruneder (Louis Gross) and Binder (Alexander Nessl), under his Viennese window. She becomes his singing pupil, and he falls in love with her but, hampered by shyness, he cannot bring himself to declare his love. Hannerl, too, has warm feelings for the composer but, when the actress, Demoiselle Grisi (Therese Tautenhayn), the jealous mistress of Schubert’s poet friend Franz Schober (Victor Flemming), warns the girl against the womanizing ‘Franz’, Hannerl mistakes her meaning and her man. Schubert writes a song to express his love for Hannerl and the easy-going Schober sings it to her, but the girl, believing that the feelings expressed are Schober’s, responds by agreeing to marry him. Schubert is left at the final curtain with only his music for consolation.

The song used for the key point in the plot was Schubert’s “Ungeduld” (‘Ich schnitt’ es gern in jede Rinde ein’) from Die schöne Müllerin, and the other musical highlights of the evening included the introduction of the three little sisters of the title to the strains of the composer’s Air de ballet from Rosamunde as they declared themselves as ‘Haiderl und Hederl und Hannerl Tschöll,’ Schubert’s version of Shakespeare’s ‘Hark, Hark, the Lark’ sung by the quartet of Schubert’s friends, and his A-major waltz, here made into Schubert and Hannerl’s duo ‘Was Schön’res könnt’s sein als ein Wiener Lied’. The show’s most endearing musical moment fell to father Tschöll (Franz Glawatsch), comforting his wife over the imminent marriage of their daughters in the warmly felt ‘Geh, Alte, schau.’

Produced in the best tradition of the good-old-days Operette, a genre which has always proven so successful in time of war or trouble, Das Dreimäderlhaus, with its picturesque recreation of the Biedermeier era, scored an enormous hit at the Raimundtheater. 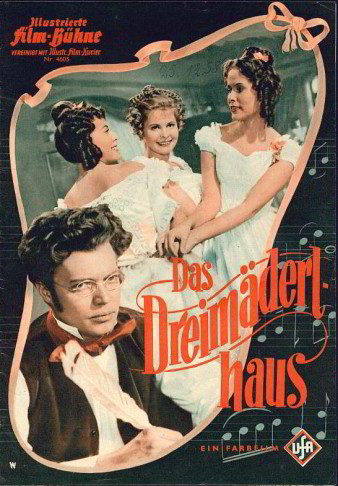 The magazine “Illustrierte Film-Bühne” showing another film version with Karlheinz Böhm on the cover.

The piece ran quickly to its 100th performance (19 April) as Artur Preuss and Karl Streitmann each took a turn at the rôle of Schubert, crossed town for a Gastspiel at the Theater an der Wien, and returned home to hit 200 nights (7 September 1916), 300 nights (13 December 1916) and, with Julius Spielmann now as Schubert, its 400th night on 8 March 1917. Hans Golle and Fritz Neumann both appeared as Schubert as the show ran on to its 600th performance (13 December 1917), ultimately closing 7 February 1918 to leave the Raimundtheater stage to a soi-disant sequel, Hannerl, in which Glawatsch once again appeared as Tschöll and Anny Rainer as Hannerl — the daughter of her original character.

But Das Dreimäderlhaus remained in the repertoire after Hannerl had been and gone and it passed its 1,100th performance at the Raimundtheater on 9 April 1927, with Preuss still appearing, more than a decade on, in the rôle of Schubert.

The huge Viennese success of the show was repeated in Berlin. Produced at the Friedrich-Wilhelmstädtisches Theater in 1916, Das Dreimäderlhaus ran there until 11 September 1918, eventually giving way to Hannerl as the evening entertainment but running on in matinées to pass its 1,000th Berlin performance on 12 November 1918. Budapest, too, gave the piece a delighted welcome. Három a kislány (ad Zsolt Harsányi), with the operatic tenor Béla Környei (Schubert), Emmi Kosáry (Medi, ex-Hannerl, with Erzsi Gerö and Hanna Honthy as her sisters), Gyula Csortos (Schober) and Ferenc Vendrey (Tschöll) featuring in the principal rôles, ran at the Vígszinház for 151 performances, before the piece moved on to a production at the Városi Színház (6 November 1919) with Környei and Kosáry again starred, returning to the Vígszinház as soon as 1922 (8 October), as it established itself as firmly in the repertoire in Hungary as in German-language theatres. It has been seen in Budapest as recently as 1997 (Erkel Színház 22 March 1997).

It was probably wartime conditions which slowed the progress of this enormous hit to the rest of the world but, when it did get to the other main theatrical centres, it thoroughly confirmed its Central-European success. Chanson d’amour (ad Hugues Delorme, Léon Abric), mounted at Paris’s Théâtre Marigny by Constance Maille, with Henri Fabert starred as Schubert alongside Marcelle Ragon (Annette Mühl ex-Hannerl Tschöll), Louis Marie (Schober) and Max Mario (Mühl), shifted quickly to the Théâtre Apollo (1 July 1921), where it ran out a fine season. It was revived in Paris in 1928, with Gilbert Moryn as Schubert, again in 1931 (Gaîté-Lyrique), and in 1933 was later played at the Théâtre de la Porte-Saint-Martin in the original German with Richard Tauber and Irene Eisinger featured. Roger Bourdin played Schubert in a revival at the Théâtre de la Porte-Saint-Martin in 1934. In France, as elsewhere, the piece has remained in the repertoire ever since. 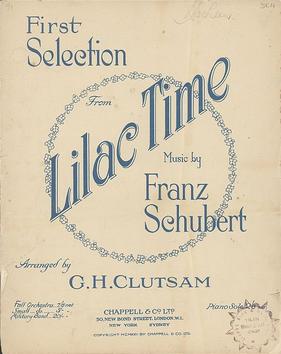 The Shubert brothers took up Das Dreimäderlhaus for America but, in their normal fashion, having paid for it, they had both book and score thoroughly remade. Dorothy Donnelly’s melodramatic version of the libretto, which rather oddly had Schubert dying broken-heartedly (to the sound of full-blooded angelic strains) at the final curtain, like a Viennese Jack Point, was accompanied by some semi-fresh Schubert arrangements made by Sigmund Romberg. The Unfinished Symphony provided the material for the most popular song, `Song of Love’. Less well made than its original, Blossom Time was, nevertheless, no less successful. With Bertram Peacock as Schubert, Howard Marsh as Schober and Olga Cook as Mitzi Kranz (once Hannerl Tschöll), the show ran a splendid 592 performances at the Ambassador Theater before beginning a very, very long series of tours and revivals. It returned to Broadway at the Jolson Theater in 1924 (19 May) and 1926 (8 March) in Shubert seasons, was revived at its original home in 1931, again in 1943 (4 September) and once more at the 46th Street Theater in 1938 (26 December). Latterly, as in the case of The Student Prince, its reputation suffered somewhat, simply from the number of Blossom Time productions and companies — often not of a very high standard — which wore a groove around the country and, eventually, it dropped exhaustedly out of the repertoire.

Britain’s Lilac Time (ad Adrian Ross) also had the Schu-Berté score revamped, by the well-educated Australian composer George Howard Clutsam, but his version stayed a little closer to Berté’s original, and the Viennese adapter was given a co-credit. In a masterly piece of casting, the (not-too-)ageing Courtice Pounds, years earlier the original hero of The Gondoliers, was cast as Schubert alongside opera star Percy Heming (Schober) and the fine soprano Clara Butterworth (Lili Veit, a very long while back Hannerl Tschöll). Music publishers Chappell & Co produced the piece at the Lyric Theatre for a first run of 626 performances, and Lilac Time began a touring career almost as full as that of its American equivalent. London had return seasons in 1927 and 1928 (Daly’s Theatre) with Frederick Blamey, Heming and Evelyn Laye starred, in 1930 with Blamey, Gertrude Wolfle and Thorpe Bates and in 1932 with Maurice d’Oisly as Schubert. In 1933 Richard Tauber appeared in his own personalised version of the piece, followed just weeks later by another season with d’Oisly and Helen Gilliland (Alhambra Theatre) who paired again three years later in a season at the London Coliseum (29 July 1936). A wartime revival at the Stoll Theatre (13 October 1942) starred Frank Titterton, Irene Eisinger and Derek Oldham, and a final West End sighting occurred in 1949 (His Majesty’s Theatre 24 February) with John Lewis, Celia Lipton and Bruce Trent featured before, as in America, the show slid away, suffering from under-quality over-exposure. 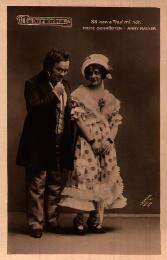 Australia waited until 1924 before seeing Lilac Time (the British version was preferred to the Donnelly/Romberg one). First time round, John Ralston (Shubert), Claude Flemming (Schober), Eve Lynn (Lili) and Arthur Stigant (Veit) had to be shunted out of their theatre in favour of a Toti dal Monte opera season and thus managed only an initial seven weeks in Sydney, but a year and a bit later Melbourne (Theatre Royal 9 January 1926) welcomed Ralston, Flemming and American soprano Harriet Bennet much more enthusiastically, and their 126-performance season established the show for a number of later returns.

The first screen version of Das Dreimäderlhaus came out soon after its opening when Richard Oswald produced a 1917 silent film based on the piece. An English film version was made in 1934, as Blossom Time, with Richard Tauber starred, and E W Emo turned out a German sound film in 1936. Paul Hörbiger played Schubert. France’s Schubert biomusical, La Belle Meunière, was not strictly a version of Das Dreimäderlhaus, but rather a piece constructed in the same way for the benefit of star tenor Tino Rossi, but in 1958 Ernst Marischka wrote and helmed one further German-language film, which featured Karlheinz Böhm as Schubert, Johanna Matz as Hannerl and Rudolf Schock as Schober and was, musically, a touch more straight Schubert than Berté’s version.

A biomusical on the fictionalized life of a composer, illustrated by arrangements of his own music, was no new idea and even Schubert himself had already been thus served on several occasions, notably by a distinctly successful Viennese Singspiel by Hanns Max, with a score arranged by Franz von Suppé, produced at the Carltheater in 1864 (10 September), but the triumph of Das Dreimäderlhaus was responsible for a worldwide flood of such pieces, as composers including Offenbach, Chopin, Mendelssohn, Grieg, Tchaikovsky and Schumann found their putative love-lives transferred to the musical stage, several of them with no little success. None, however, managed to approach the overwhelming international fame won by Das Dreimäderlhaus and its various national variants.