It certainly is a little unusual: a ballet version by Roland Petit of the Johann Strauss classic Die Fledermaus. Filmed in Milan in 2003 with some truly dazzling dancers from La Scala, newly released by the label Arthaus. 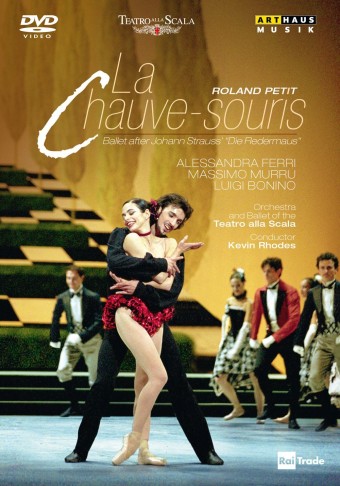 The Arthaus DVD release of “La Chauve-souris” with the dazzling Massimo Murro all in black.

The musical arrangement of the score was done by Douglas Gamley. And the story is somewhat reduced – there is no prison guard called Frosch, for example, and the action doesn’t take place in Vienna but in Paris. Where it was originally set anyway, in the play that the Strauss librettists used as their basis, violating copyright laws back in 1874.

This DVD of La Chauve-souris captures a live performance of the La Scala ballet ensemble in their interim quarter, the Teatro degli Arcimboldi, where they had to move in 2003 because of renovations of the historical main house. Kevin Rhodes conducts the La Scala orchestra. They sound just as fresh as the dancing looks.

Roland Petit had created this ballet in 1979 for the Ballet National de Marseille and first presented it in Monte Carlo. It was a success, as ballet expert Boris Michael Gruhl recalls. Part of the success, Gruhl writes, was due to Zizi Jeanmaire returning to the stage as prima ballerina. She was Petit’s wife. In Milan, the great Alessandra Ferri takes on the lead role, coached by Jeanmaire.

Roland Petit died in 2011 at the age of 87. He was one of the great innovators of ballet, not just in France. As Boris Gruhl remarks, he tore down the walls that separate show business and classical ballet. Something that is very evident in this Fledermaus where you only have three dancers to tell the story. (Plus the off-scene voice of tenor Giorgio Trucco, singing the Alfred music.)

The Eisensteins are here called Bella and Johann. We see them, in the beginning, with their many children as a respectable family.

But then Massimo Murro as the adventurous husband dances off and we know he’s up to no good. Alessandra Ferri as the abandoned wife takes flight too and lands at Maxim’s, the famous Paris night club. A master of ceremonies – a Charlie Chaplin type – takes on all the other roles, danced here by the charming Luigi Bonino.

The ballet of La Scala offers pure joy, the Corps de ballet demonstrates fabulous technique, and the soloists all have their amazing moments of glory. One should also mention that Mick Zeni delivers some ravishing csárdás variations. And even though the production is eleven years old, it looks as dazzling as ever without any dust, at all.