It is somewhat astonishing that all of a sudden Offenbach’s La belle Hélène is returning to the stages of Northern Germany – with a giant splash. This week-end, the Hamburger Staatsoper will present a new large-scale production by Renaud Doucet and André Barbe, starring Jennifer Larmore in the title role. Then, less than a month later, Barrie Kosky will unveil his own version “à la Monty Python” in Berlin at the Komische Oper. Get ready for a double whopper! 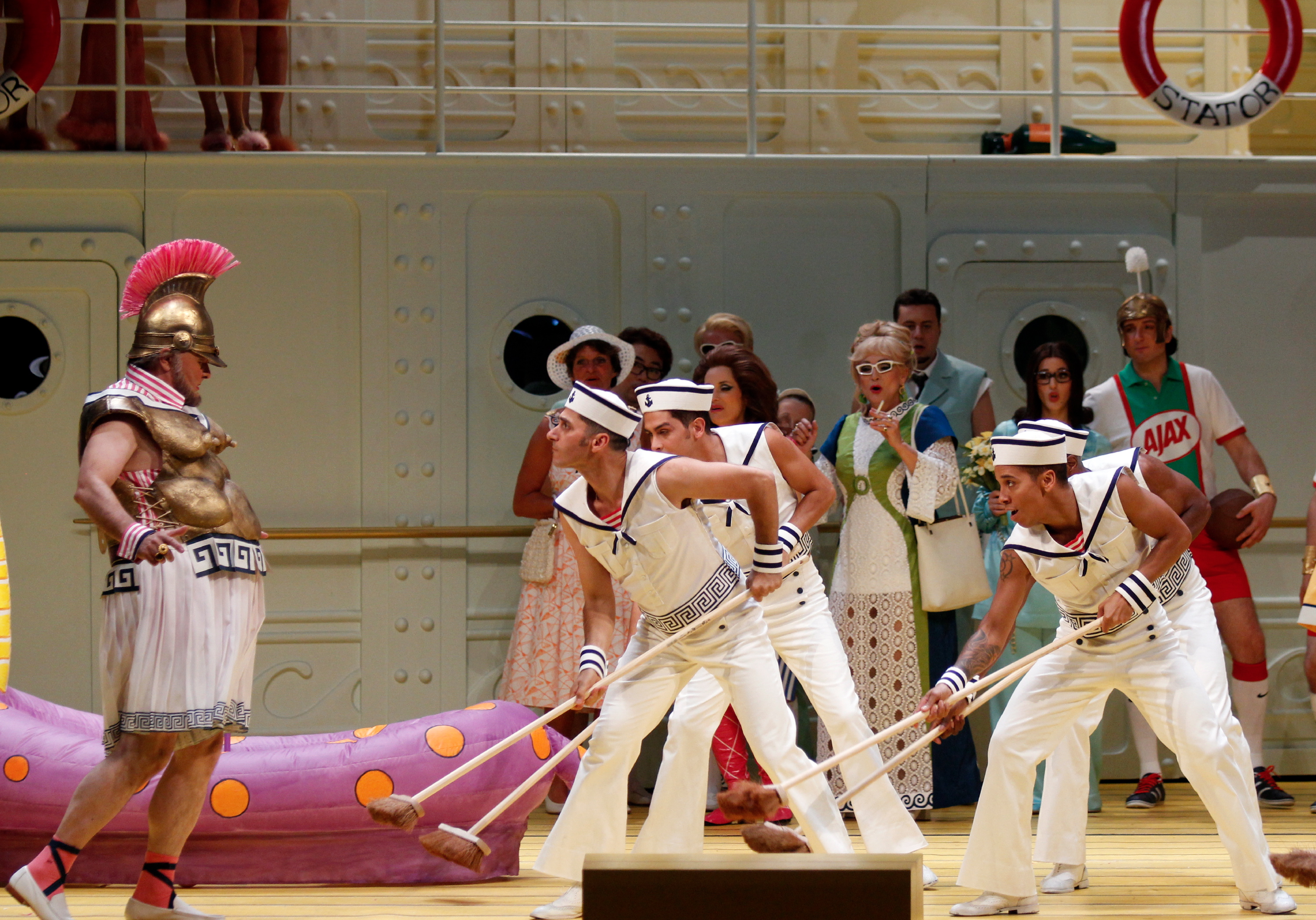 Die schöne Helena has always been one of Offenbach’s most scandalous shows, and one of his most successful in Germany and Austria. The first Viennese Helena, Marie Geistinger, dazzled audiences back in the 1860s by displaying a lot of nudity, up to the point of completely undressing for the dream scene where she goes to bed and awaits Prince Paris. Later, Die schöne Helena was played again and again whenever a gorgeous soprano was at hand – and opera directors wanted to give their divas a chance to shine. Be it Maria Jeritza, Fritzi Massary or Jarmila Novotna, to name only a few. Later, Anna Moffo and Anneliese Rothenberger joined this club of German singing stars.

As time went by, they displayed less and less flesh onstage and focused, instead, on singing – classical singing, which has not always worked to the advantage of this show. Though, of course, it depends on who you ask to evaluate this phenomenon. 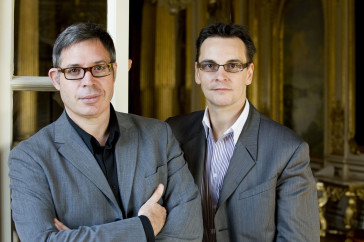 In Hamburg, the production (and real-life) team, Renaud Doucet and André Barbe, has opted for a staging in French – instead of the classic Ernst Dohm translation from the first Vienna version. Yes, there will be supertitles, but it is a little puzzling why the Hamburger Staatsoper wants to present a show in which the dialogue plays such an important part in a foreign language.

Conductor Gerrit Prießnitz intends to perform the reconstructed “original” Paris version with a reduced orchestra, not the more opulent Vienna version. Given the size of the house in Hamburg – which is a large-size modern theatre with multiple tiers – the decision to use a smaller orchestra is as surprising as the choice of French as the language to sing and converse in. 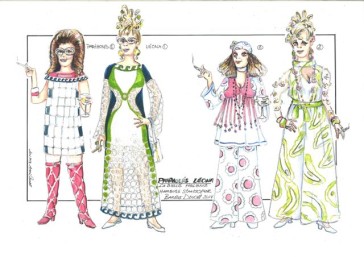 Renaud Doucet and André Barbe have opted for a “super camp” production in which the action is set in a Sixties design – not the slick Mad Men era style, but the flower power trash style. This could work very well, as could the emphasis on dancing. Don’t forget, Doucet used to be a dancer himself and now works as a choreographer. Dazzling dance sequences have been the secret of success for Barrie Kosky in his Berlin productions: Kiss Me, Kate, Ball im Savoy and West Side Story. If half-nude men in energetic ballet formations can win over Berlin audiences to the joys of operetta, the same could work in Hamburg for the more restrained “Hanseaten.” 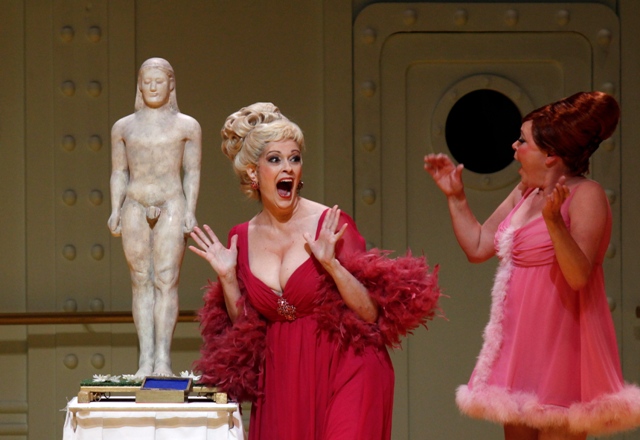 Given all the things the conductor and stage directors have said about what they want to achieve (“frivolity,” “bubbling entertainment,” a look into “the psyche of a lusty lady bored by her husband” like Emma Bovary etc.), the casting is slightly surprising: Jennifer Larmore is not unfamiliar to Offenbach fans, she was part of various Opera Rara recordings of rare Offenbach shows. While a great singer, she is not a bubbly entertainer, nor a vocally lusty opéra-bouffe lady (Lady Macbeth being one of her current heavy weight roles). There is the chance that conductor Prießnitz worked intensively with her and got her to change her Offenbach style. How she will work in combination with Jun-Sang Han from Seoul as Prince Paris remains to be seen. Opening night is on Saturday, 20 September 2014. 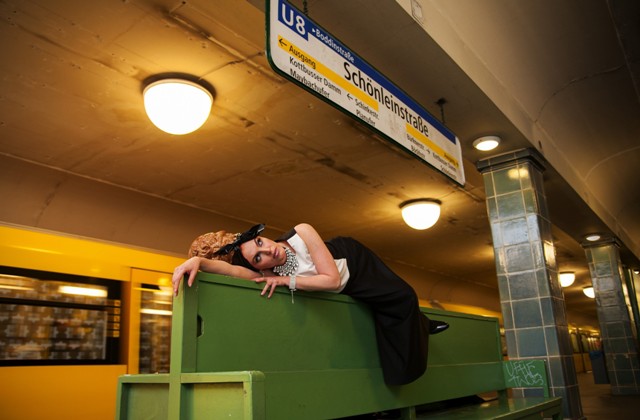 In Berlin, there had been plans for a Helena starring Dagmar Manzel who was such a breathtaking Offenbachienne in Großherzogin von Gerolstein and Perichole. She certainly would have been able to bring out the mad-cap aspects of the show. But Mr. Kosky has meanwhile changed his mind and decided on Nicole Chevalier and Cornelia Zink as Helenas, in combination with the darkly-handsome Tansel Akzeybek as Paris. His General Music Director, Henrik Nánási, will conduct the premiere on 11 October, 2014. 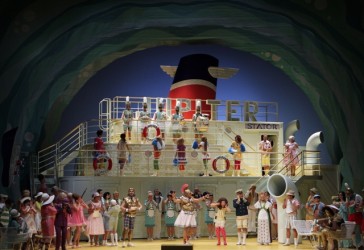 Incidentally, the Berlin production will not use the classic Ernst Dohm translation either, but one by Simon Werle. According to Wikipedia, he received the Literaturförderpreis der Landeshauptstadt München in 1985, a prize of the “Frankfurter Autorenstiftung,” in 1988 the “Paul-Celan-Preis,” in 1992 the “Johann-Heinrich-Voß-Preis” for translation, handed out by the Deutsche Akademie für Sprache und Dichtung in Darmstadt. Whether these accolades herald anything good – or à la Monty Python, as Mr. Kosky has promised in various interviews and announcements – remains to be seen. What is also of interest is whether this will be the dawn of an general Offenbach renaissance in Germany. We had a (terrible) Orpheus in the Underworld in Berlin at the Staatsoper recently, as well as the aforementioned Gerolstein and Perichole (twice actually.)

But no “Barbe-bleue,” no “Geneviève de Brabant,” no “Voyage dans la lune” – not even “Les Brigands.”

Our fingers are crossed that the upcoming double whopper will stimulate new interest in the Original Operettist and his other exuberant works. Revivals all around, please!

For more information on the Hamburg production, click here. Details on the Berlin staging can be found here.