Finally, there are images of the new Staatsoperette Dresden. It will be situated in Kraftwerk Mitte. And for the first time, journalists were invited to visit the construction site and take a look themselves. 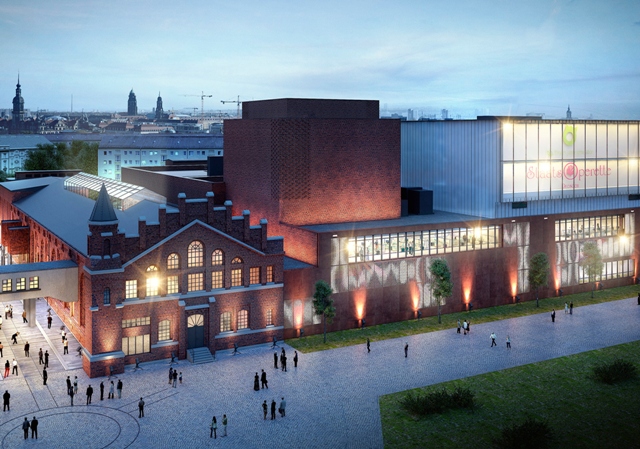 You will recall, this week-end the Staatsoperette starts its new season. Anyone who wants to peek behind the scenes of the old house in Leuben will have a last chance to do so on Saturday, from 10 to 13h. The musical Zirkus Furioso and a performance by the children’s chorus will be part of that “open door” event. In the evening, there’s a revival of Little Shop of Horrors to kick off the season.

It will be the penultimate season in this remote part of Dresden. From December 2016 onwards, the Staatsoperette will operate from the so called Kraftwerk Mitte, a newly built theater at Wettinger Square. It will contain four theatres, actually, three of which are reserved for the “theater junge generation,” a puppet theatre group.

The largest auditorium with 700 seats, however, is reserved for the Staatsoperette and its repertoire. 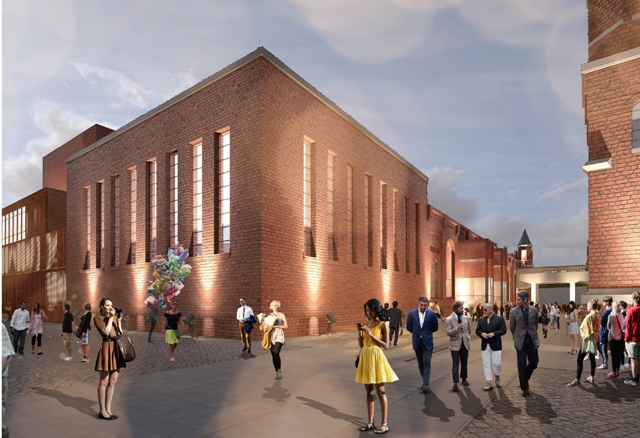 A different perspective of the Kraftwerk Mitte. (Photo: Staatsoperette Dresden)

Construction work is progressing, that is clearly visible even from the outside. Right now, the largest crane in the city is being installed, with a 70 meter long arm. To mark the occasion, Staatsoperetten intendant Wolfgang Schaller invited the press to walk with him through the site, and have technical director Mario Radicke explain what is happening – and what will happen in the future.

Before the tour began, Mr. Schaller repeated the titles on offer this season, from Zarewitsch to Catch Me If You Can to Strauss’ Cagliostro and Anatevka. He did not fail to mention that the two Russian themed shows have taken on a new edge because of recent political events.

Though he doesn’t aspire to change world politics, he wants to show that operetta is a relevant and topical art form, not brainless “tingeltangel.”

Musical director Andreas Schüller explained why he considers Cagliostro a particularly interesting show to perform at the start of the next Johann Strauss Festival in 2015. Dresden will try to present the work in the original version, without any of the later “Bearbeitungen.” 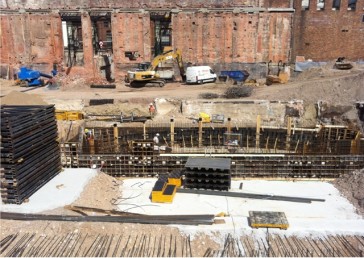 Nothing was said, yet, about the inauguration production of the “new” Staatsoperette. But, obviously, the new dimensions and possibilities of the Kraftwerk Mitte are something that is taken into account when it comes to selecting a work.

This was the cue for Mr. Radicke to take over. He was noticeably happy about the way the auditorium is laid out – with ideal views from all seats, and great acoustics everywhere. Radicke has been involved with the design of the new stage from the beginning and said he was pleased that they will be able to realize all their original ideas, without compromises.

The future main stage will be 12 by 12 meters, the proscenium will be 7.50 meters high. The pit is to be 150 square meters, of which nearly half will not be covered, guaranteeing great waves of sounds can emerge. 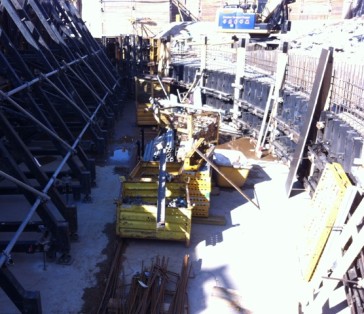 There will be two side-stages of equal size as the main stage. And a back-stage area of 300 square meters. A revolving stage will be installed in this back-stage area that can be moved forward while turning. This is ideal for large-scale reviews and opulent productions. Acoustically, there is the opportunity to use 40 individual microphones during each performance.

In the same building complex as the theatre there is a rehearsal space with the same measurements as the actual stage, also a ballet room, an orchestra rehearsal room and a recording studio.

Judging by the construction work underway, one can say that the project is definitely making progress.

It’s certainly beyond the point of being called off again.

Right now, the attractive façade is only glowing on the animation photos the architect supplied, on which you see how the historical parts of the building are going to be integrated with the new parts. At the latest in December 2016 we shall see for ourselves whether the animation will look anything like the real thing.