You could have been fooled into thinking there cannot possibly be anything new to say on the topic of Richard Tauber. Right? Well, reconsider. Martin Sollfrank has just published a new biography of this “Weltstar des 20. Jahrhunderts” and manages to surprise the reader with Musik war sein Leben. 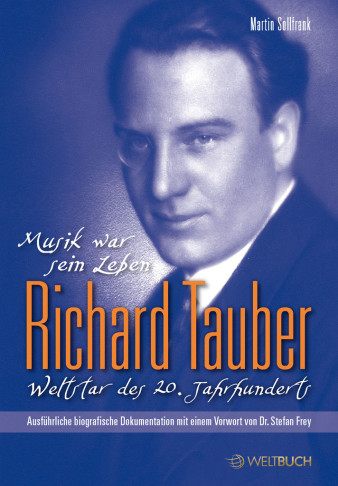 This massive hardback book of 500+ pages, plus expansive image appendix, is the first biography of Tauber that tries retelling the entire life of Tauber and narrate all aspects of his career with equal care: the opera singer, the operetta singer, the recording artist, the media star, the advertising personality, the film actor, the conductor, the composer, the man in exile… As Stefan Frey points out in his foreword, most previous biographies have focused on one or the other aspect, but never have all the parts of this puzzle been added up. And certainly not with so much attention to detail.

As Frey writes, Mr. Sollfrank is not your usual operetta researcher – he’s not even a professional writer – but someone who got hooked on Tauber and wanted to know the “truth” behind all the contradicting legends. So he set out to visit all the relevant archives and find all the details about all the performances Tauber ever sang, he also dug up all personal records you can find. That becomes apparent right away in chapter 1, when you learn who exactly the parents and grandparents of Tauber were, at what time and in which church he was baptized Roman-Catholic as a baby etc etc. 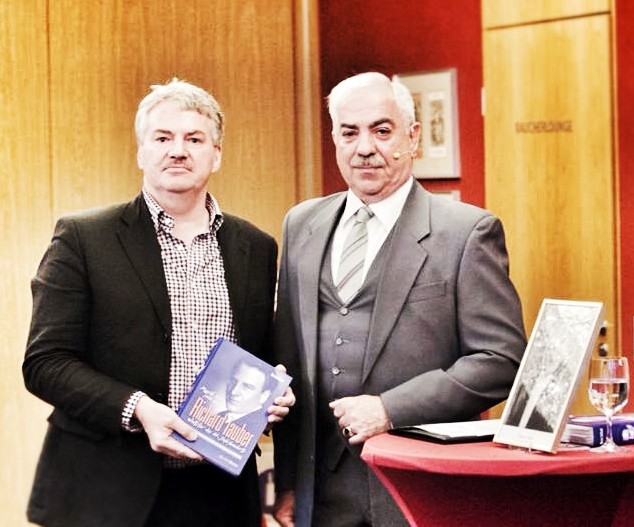 The author, Martin Sollfrank (r.) during the book presentation at the Semperoper Dresden with Intendant Wolfgang Rothe, who was given the first copy of the book.

Sollfrank doesn’t want to force his interpretation of Tauber’s career and importance upon the reader; he just wants to present facts. Which is exactly what he does. And the facts are amazing, because you realize how much more Tauber was – more than just a “singer.” Sollfrank’s attention to detail also deconstructs many myths. And he presents endless photos which show Tauber in nearly every role he ever took on. You can see him, as a young man, as Irmeland in Mantje timpe te, as Belmonte, Wilhelm Meister, Lorenzo in Fra Diavolo, Narraboth in Salome and many other operas, most of them forgotten today. The same is true about the operetta photos. (Ein Märchen aus Florenz, anyone?)

There are individual chapters on his colleagues and artistic friends, for example an entry on Max Hansen, Leo Slezak, Tino Pattiera and many many more. All shown with photos.

There are clippings from program books and magazines, letters and postcards – many in color. In short, it is a treasure trove that will keep you hooked for many hours at a time.

The presentation of the book is opulent, though the layout inside – at times – is somewhat “amateurish,” but in a charming way. You feel and see that this is a labor of love. It does not outclass some of the existing Tauber biographies which all have their merits, as Stefan Frey eloquently points out. But this book goes beyond all previous books, so it should be seen separate and as an addition. A welcome addition, I may add.