If you’re British, you undoubtedly will have heard of Alan Titchmarsh, the man who went from gardener to Classical FM guru. Last week, Titchmarsh published a passionate article in The Telegraph headlined “Don’t be a music snob about operettas.” Well, that certainly caught our attention, especially the sub-headline claim: “We’re missing a trick, not celebrating operetta more.” 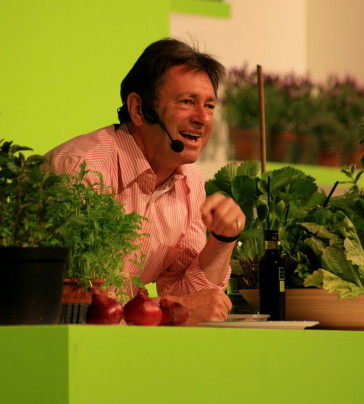 Alan Titchmarsh at the 2008 Gardeners’ World Live Exhibition in the NEC. (Photo: Wikipedia)

The English gardener, broadcaster, and novelist seems to have a fondness for operetta and advocates the exploring the genre beyond the eternal Merry Widow borders. He wishes to include “the musicals of Lionel Monckton – The Arcadians and The Quaker Girl – Noël Coward’s Bitter Sweet and the compositions of the king of the British musical in those days, Ivor Novello.”

Before going on to explain the glories of Coward and Novello, Titchmarsh makes a basic point about operetta: “Rap, hip hop, opera, garage, classical, folk, pop, musicals and jazz all have their champions – and their audiences – but dear old operetta seems to have slipped away unnoticed into the history books, seldom if ever to be hauled out for an airing.” (Okay, we’ll get back to the “dear old operetta” bit in a second.) Titchmarsh continues his explanation of why operetta is neglected: “The reasons are easy to discover. Opera fans, for instance, will spurn operetta as being a touch too lowbrow. They prefer their works to be ‘sung through’, rather than having the characters lapsing into dialogue to carry the plot forward.” Titchmarsh’s highly unoriginal argument is: “The bottom line is that operetta is unfashionably dated, and audiences would find the likes of Franz Lehar’s Count of Luxembourg and Kismet tiresome – and maybe even laughable – to sit through. So why should I fight their corner? For one simple reason – good tunes.”

This unoriginal argument, that operetta stories are laughable and ignorable, and that one should focus on the great tunes instead, comes straight from Nazi times where the radical dumbing-down of the genre started – always with the emphasis that the heart-warming tunes make it worth playing the songs nevertheless, to lift the spirit.

Are those “broad circles of the population” caught up in “a severe struggle to survive” and “thankful for simple and easy entertainment” the same people who tune into Titchmarsh’s radio program on Classic FM? Very possible.

What should be considered, though, is that most original reviewers of operetta pre-1933 took great pains to analyze the text books and took them very seriously. That doesn’t mean they always praised them, but they absolutely did not sit in the world premieres of Lehar, Kalman, Straus, Benatzky or Abraham just for the melting soprano (or tenor) solos. It’s a question of how you integrate plot and music, and how you present those often absurdly silly – or “zany” – dialogues. Operetta specialists such as Fritzi Massary, Max Hansen, Lily Elsie or Ivor Novello once had a particular style which made the “cheesy and predictable” stories fun, just like an episode of South Park or a Monty Python movie. The cheesier the plot, the more fun could be had with it. But you need to feel the irony and wit. The same way Hollywood does it today, sometimes, making predictable stories work and amusing, sometimes even intellectually stimulating. (Think of Quentin Tarantino.)

To just say “forget the silly stories and focus on the hit songs” is a very easy way out. Actually, it’s the easy way out that gave operetta the bad reputation it has today, and that Titchmarsh wants to argue against. Maybe he should take a closer look at the genre and make a more informed statement about it next time he writes for The Telegraph or broadcasts on Classic FM?