There’s movement and an overdue sense of innovation at the Musikalische Komödie in Leipzig: the second remaining operetta theater left over from Socialist times, the other being the Staatsoperette Dresden. From former West-Germany there is the Gärtnerplatz Theater in Munich. After the MuKo announced a new chief stage director, Cush Jung, they now announced a new musical director/chief conductor too: Stefan Klingele. 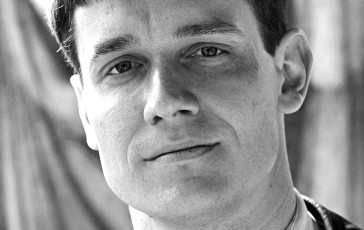 Klingele  studied conducting and cello at the Hochschule für Musik Würzburg and lead the Neuburger Kammeroper as a student for three years. In 1993 he got his first job as accompanist and conductor at the Nationaltheater Mannheim. After three further years he moved onto the Staatstheater am Gärtnerplatz Munich, and then onto Bremen where he worked from 1999 to 2007. He received various prizes from his opera work, none for musical comedy or operetta.

So it remains to be seen whether his upcoming productions of Wiener Blut (17 October) will be as memorable as his Intolleranza 1960 by Luigi Nono at the Staatsoper Hannover in 2010/2011. After the Johann Strauss premiere he will conduct Die Himmelfahrt Jesu Christi, an oratorio by Albert Lortzing, as well as repertoire performances of My Fair Lady, Im Weißen Rössl, Der Opernball, Der Wildschütz, Aschenputtel and Land des Lächelns.

It’s a somewhat eclectic mix that would be a stylistic challenge for anyone. If Klingele can bring a recognizable and world-class operetta sound to the MuKo that would be nothing short of a miracle, but a miracle the house – and the German operetta scene – needs. Adam Benzwi in Berlin and Florian Ziemen in Bremen and Gießen have proved that it is possible to achieve such miracles, and that it’s something worth trying. Klingele already knows the orchestra at the MuKo from conducting Romeo & Juliette there last year.