This newly issued 2020 recording from CPO has rarely been out of my CD player since it arrived: it is a total delight, not only because it has introduced me to some wonderful music that I was not aware of, so melodious and imaginatively orchestrated, but because of the stylish, crisp playing of the Brandenburgisches Staatsorchestester Frankfurt under Ernst Theis. 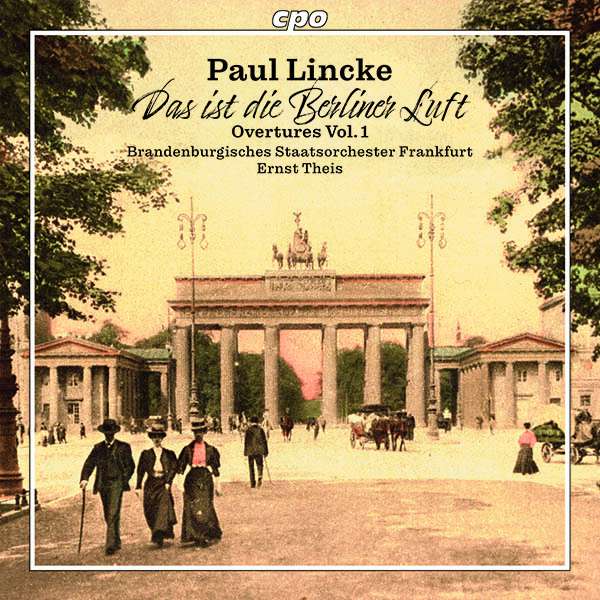 Paul Lincke (1866-1946) is often referred to as Berlin’s Offenbach, not surprisingly perhaps, as he was for a time director of music at the Folies Bergères in Paris and because most of his operettas are in a single act, as many of Offenbach’s were too. Lincke established a particular “Berlin style” of operetta that paved the way for the German capitol as a serious alternative to so called Viennese Operetta.

The earliest of Lincke’s one-acters to be represented on this CD is the overture to Venus auf Erden (1897), a ‘burlesque-fantastical operetta’ combining elements of popular, frivolous, and highbrow culture, like early Parisian operettas, and owing much to the plot of Orphée aux enfers. The overture is a seven-minute potpourri containing a lugubrious trumpet solo plus a delightful waltz both of which are quickly memorable. 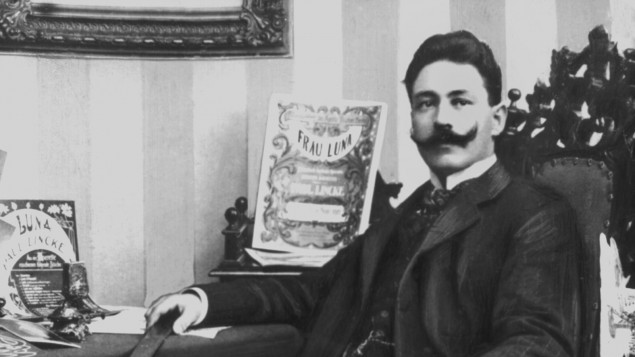 Next, chronologically, is a waltz sequence “Unrequited Love” (“Verschmähte Liebe”), also dating from 1897, supposedly composed in Paris in tribute to John Phillip Sousa’s wife who rejected Lincke’s attempts at an affair. We learn this in the booklet essay by Stefan Frey. Mrs Lincke, having been told of this, is said to have travelled to Paris where she stormed into the Follies during a performance at which Paul was conducting and slapped him around the face, whereupon he just continued, and the audience cheered! The Viennese type waltz has the usual contrasting sections and the playing of the orchestra here is light and buoyant with true Viennese lilt.

40 years before Rodgers and Hammerstein, Lincke wrote an “Entrance of the Siamese Guards” (“Siamesische Wachtparade”) which comes from his 1902 Nakiris Hochzeit set in Thailand. This became a very popular item of Lincke’s own publishing firm Apollo-Verlag which issued arrangements for almost every conceivable musical combination. The brisk march sounds much more German than Thai – marches being Lincke’s particular “Prussian” trademark.

Lysistrata – loosely based on the famous Greek comedy by Aristophanes about the women of Athens refusing to have sex with the warrior husbands until they end war – was composed in 1903 and includs a trio which has come to be known the world over as “The Glow Worm Idyll” (“Glühwürmchen Idyll”), strangely that tune is not included in the attractive eight-minute overture, fanfares and all.

The farce Berliner Luft, which followed in 1904, was also given a grand overture – and you get “the” march at the very end – once. It’s probably Lincke’s most famous tune, and it’s since become something of an unofficial anthem for the city of Berlin. It was later added to Lincke’s Berlin-themed one-acter Frau Luna (1899), about a group on adventurous big city guys who fly to the moon on a self-made rocket ship and discover sexual freedoms up there they re-import to Berlin. 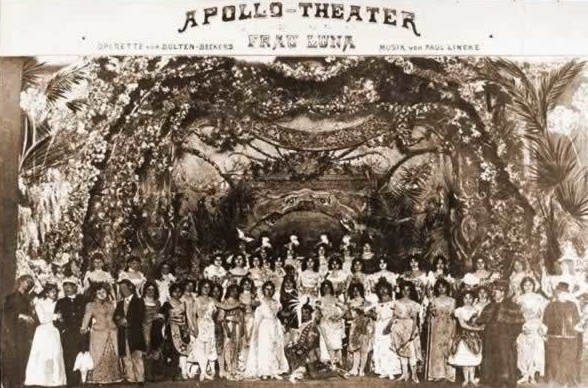 Postcard with the original 1899 “Frau Luna” cast at the Apollo Theater.

Berliner’s were losing the taste for such one-act stage works, however, performed at slightly scandalous venues such as the Apollo Theater at the lower end of Friedrichstraße (where prostitutes awaited you around the corner at Hallesches Ufer) or at Metropoltheater (where prostitutes were famously cruising the upper gallery during intervals). So Lincke tried his hand at his first full length three-act operetta, Gri-Gri set in Africa, about the amorous escapades of the daughter of the King’s 169th wife! 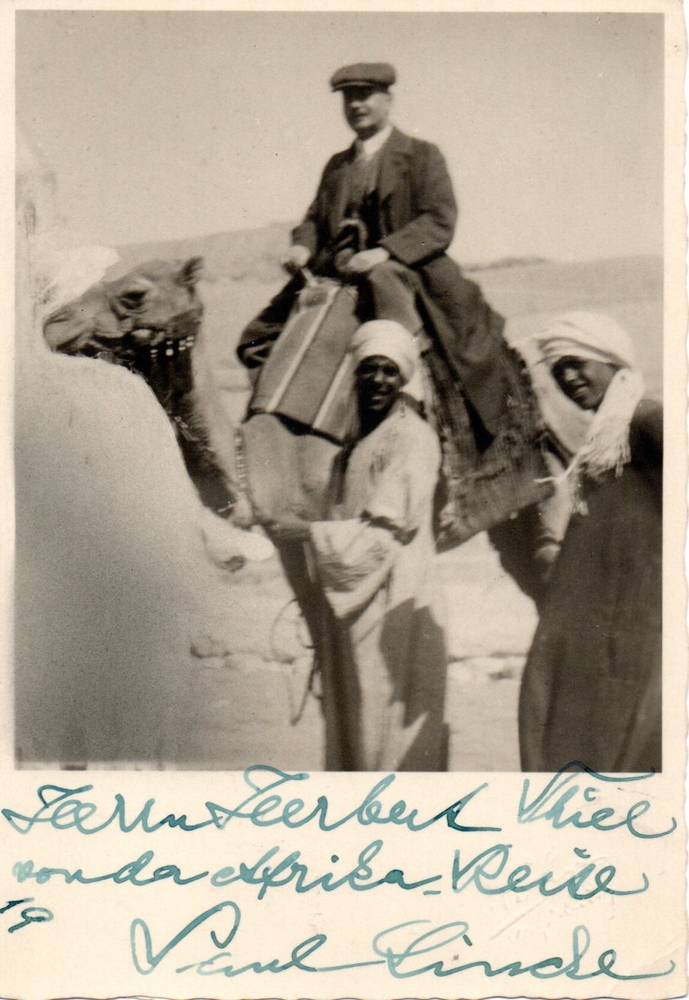 The premiere in Cologne (!) was successful, but it did not appeal to Berlin audiences seeking stronger thrills. The overture is the most Offenbachian, the composer making no attempt at all to give it an African flavour!

His next full-length operetta, Casanova was premiered at Chemnitz in 1913, but this too failed to please Berlin audiences, who by then preferred the works of Franz Lehár, Leo Fall, Oscar Straus, Walter Kollo and Jean Gilbert. (To read more about the complete 1907 recording of Lustige Witwe with the original Berlin cast, restored by Truesound Transfers, click here.)

As a result, Lincke stopped composing stage works altogether for the rest of his life, confining himself to publishing and composing instrumental music such as the melodious Overture to a Ballet (1919) and Overture to an Operetta (1926), both of which, as with all of this CD programme, are totally delightful. 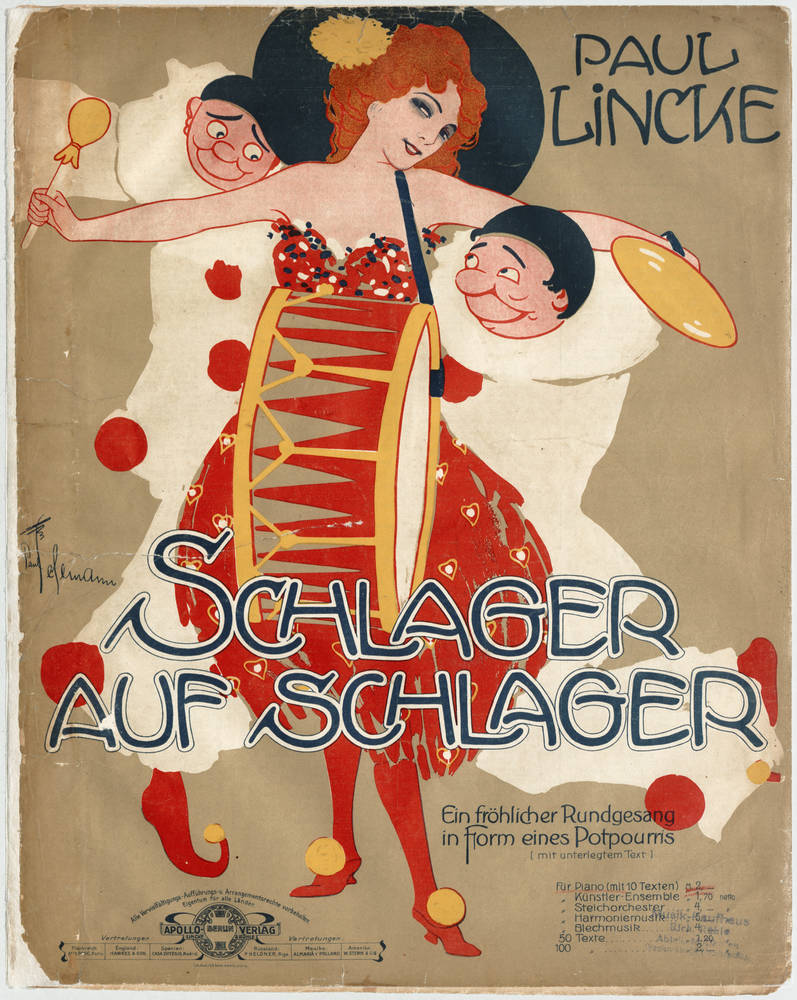 A collection of Paul Lincke hits from 1909. (Photo: Apopplo-Verlag)

In the 1920s Lincke recycled his most famous work Frau Luna into a three-act operetta using songs from other works and interpolating the aforementioned march ‘Berliner Luft’. But in the 20s his now considered “old fashioned” style did not appeal to Jazz Age audiences in Berlin who rather listened to Paul Ábrahám, W. R. Heymann, the syncopated glories of Erik Charell productions and other representations of “modern” times that left the Wilhelmine Era – which Lincke represented for many with his “Prussian” marches – behind. 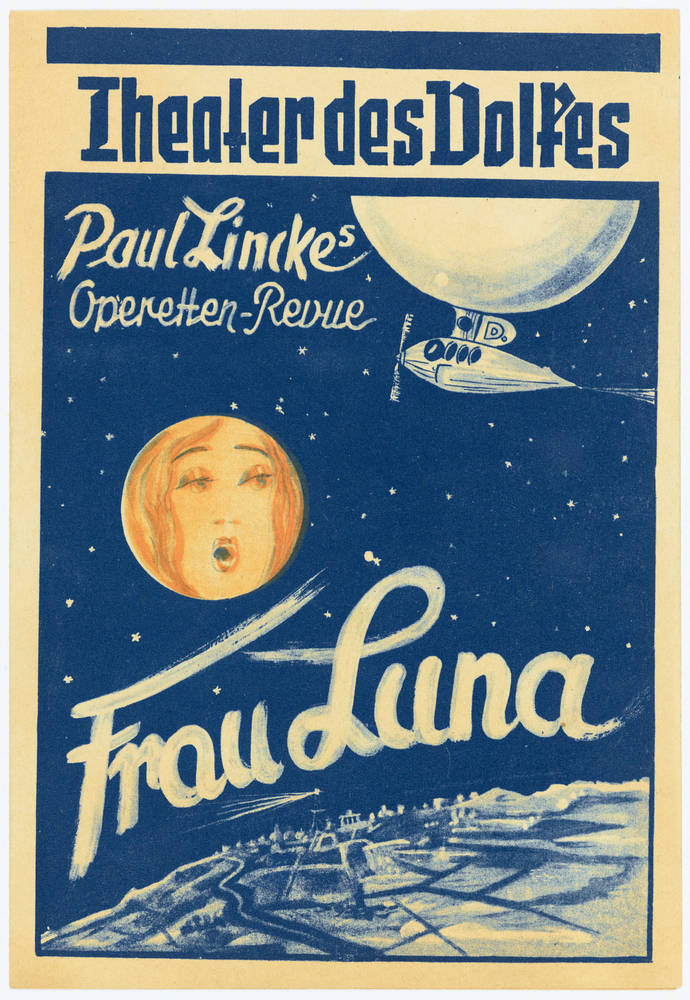 But it was exactly this “old fashioned” aspect that gave Lincke’s career a boost after 1933 when the Nazis came to power and erased as many traces of modernity from the operetta industry, calling them “degenerate” and “Jewish”. Lincke was Christian and represented the perfect antidote, the Nazis claimed. In the 1930s Lincke’s music was played on the German radio, over and over again, he made more and more public appearances, was promoted in any way possible by the propaganda minstry, and his Frau Luna got an XXL production of the former Großes Schauspielhaus, now called “Theater des Volkes”.

Together with pieces by Johann Strauss, Lincke was advocated as the superior “Aryan” operetta ideal. In his booklet essay, Stefan Frey touches only briefly and vaguely on these themes, just as he only vaguely mentions the “frivolous” side of Lincke’s one-act shows, never saying what exactly made them frivolous (and interesting) to pre-WW1 audiences in the respective venues. 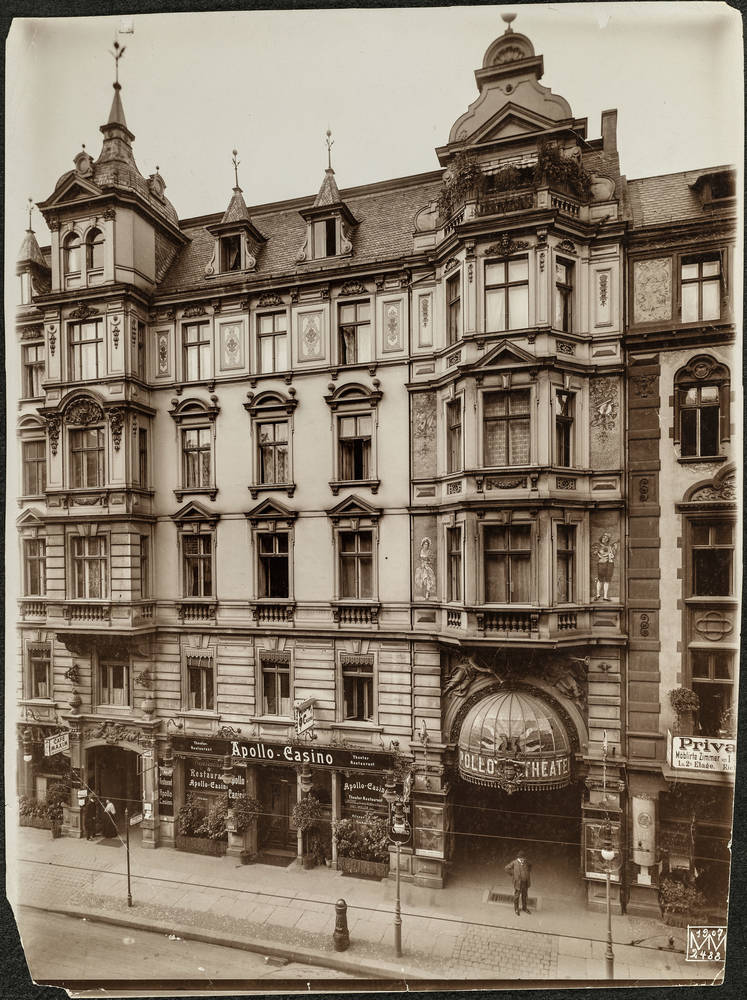 The Apollo Theater and Casino at the lower end of Friedrichstraße, in 1907. (Photo: Max Missmann / Stadtmuseum Berlin)

There was a Gala Concert in honour of Lincke’s 70th birthday in 1936. The Nazis awarded him the Silver Medal of Honour, and he was given the Freedom of Berlin in 1941. Shortly after that he had to flee from the bombs and went to Marienbad in Bohemia, so he wasn’t at home when his house in Berlin was completely destroyed by a bomb hit, with all his possessions burned. 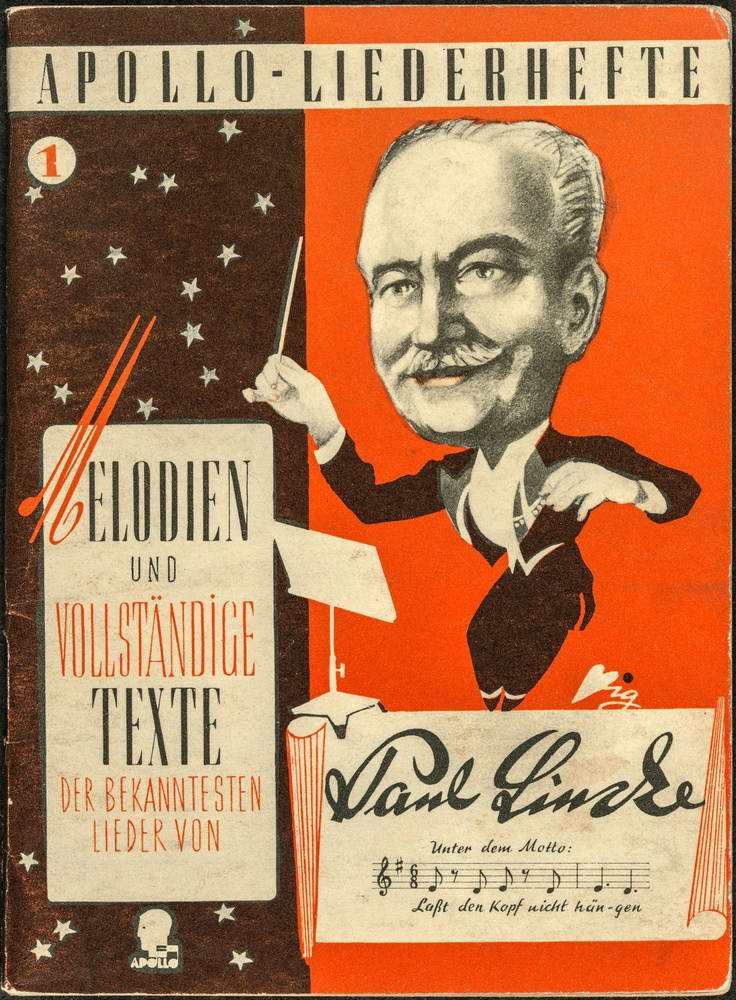 A collection of Paul Lincke’s greatest hits from the 1950s. (Photo: Apollo-Verlag)

After the war, Lincke performed his famous “Glühwürmchen Idyll” at the invitation of the American Army at the Bayreuth festival theater (!) with his small touring orchestra, but because he could not obtain a permit from the occupation army to return to Berlin he moved to the small town of Hahnenklee in the Harz mountains, where he died in September 1946. He’s also buried there, far away from the ‘Berliner Luft’, as Stefan Frey writes. 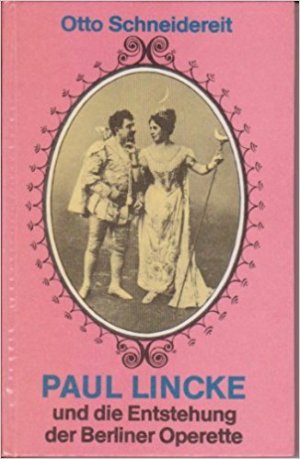 There’s a critical biography by Otto Schneidereit from DDR times, but so far nothing new in terms of operetta research has been published. Today, Lincke’s music is copyright free, so performing his works has become cheaper for theatres, and stage directors have begun to be more “adventurous” reworking/recycling his shows. His Frau Luna made massive splash in Berlin recently when the Tipi theater put it on with an all-star cast that included Geschwister Pfister, Cora Frost, Ades Zabel et al (read more about it here).

The programme of instrumental works on this CD, with the Brandenburgische Staatsorchester Frankfurt, shows us a composer who was a superb tunesmith and self-taught orchestrator. It is fascinating in showing us that Lincke is much more than the composer of Frau Luna and the founder of “Berlin Operetta”, his music always being cheerful, happy and positive, almost relentlessly so. Just the CD to play on a wet day (it has rained or snowed here in the UK every day for the last 30 days!)

By the way, the booklet notes are translated into English, even if the type face could not be any smaller…

PS: If you listen to Paul Lincke conducting his own music in historic recordings you realize what is missing in Ernst Theis’s “academic” approach to this repertoire – the absolute showmanship that Lincke was famous for as a star conductor.