The headline in the email to the local press certainly caught our attention: “Europäische Stiftung Operette (ESO) präsentiert Berliner Operette in Berlin.” Who would have guessed that this “European Operetta Foundation” still exists, after the various turmoils it went through more than ten years ago. Remember the dramas surrounding Marguerite Kollo and the Staatsoperette Dresden? That was when the “Stiftung” was still, temporarily, based in Saxonia. They then moved to Rüdersdorf, and were thrown out there after a very short while because of imcompatible behavior. And now ESO is back with a vengeance in Berlin to present a title that is “young, full of feelings, poetical, melodious, dancing, humorous, witty, entertaining, and close to the people”! 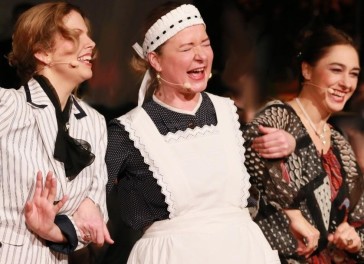 Yes, that’s actually what is says: “volksnah.” Not a category you are likely to have heard in combination with operetta in recent years, perhaps not since 1945. It’s an attempt to differentiate “this form of operetta” from what Barrie Kosky is successfully doing in Berlin with Abraham and Dostal, Offenbach, Spoliansky et al. Those productions might be sold out constantly, admittedly, but are they “volksnah”? Probably they are for “that” kind of audience: gay, cosmopolitan, and mixed in age and gender. So: bad, bad, bad. And with cross-dressed leading ladies in drag! What is the operetta world coming to….?

The new this-kind-of-show Berlin is going to get, coinciding with the 75th anniversary of Walter Kollo’s death in September, is Drei alte Schachteln. According to the press release, the ladies in that show are not “old”; instead it’s an operetta about “Berlin feminist power” in ¾-time. With “tunes, tunes, tunes.” Where will it happen? At the Admiralspalast on Friedrichstraße, on 26 and 27 September, 2015. (Yes, that’s the old Metropoltheater of DDR times.)

Miss Kollo is in charge of the “scenic concert-concept,” and of the direction! And just because it’s remarkable: the ESO was founded in 2003 to revive the then recently closed Metropoltheater. Closed down after René Kollo had taken over the direction and had ruined the house. Now, ESO and the Kollos want to stir things up once more, with “urberliner Musiktheaterkultur.”

The press release mentioned that this production of Drei alte Schachteln had already been seen – “successfully” and in front of “a sold-out house” – in January 2015 at the Biosphäre Potsdam, for two performances.

It would be easy to poke fun of this attempted production that tries to change the current success wave of “Operetta Made in Berlin” into a different direction – more “volksnah”.

While we here at ORCA are happy to see a title such as Drei alte Schachteln revived (after another Kollo operetta had been produced, quite charmingly, in Rüdersdorf two years ago), we certainly hope that local operetta will not swing back to the boring old-fashioned style of the pre-Kosky days. There was a reason those productions didn’t work, and why the Metropoltheater was closed. It might be better to look ahead and offer something new, ground-breaking and convincing – with leading ladies in drag! – rather than recycling the same old “traditions” that weren’t even popular when they were said to have been popular.

As Hugo von Hofmannsthal said: “Jedes Ding hat seine Zeit!” And this particular form of operetta performance is not of our times anymore, however, Drei alte Schachteln is a show that would deserve a fresh production that demonstrates how modern these “urberliner” shows actually are.