Artistic Director Ted Sperling conducted a splendid concert reading of George and Ira Gershwin’s Pulitzer Prize-winning 1933 musical Of Thee I Sing in 2017. So it was only a matter of time before he’d get around to the 1933 sequel Let ‘Em Eat Cake, which originally featured the same principal cast members and creative team (including book writers George S. Kaufman and Morrie Ryskind). 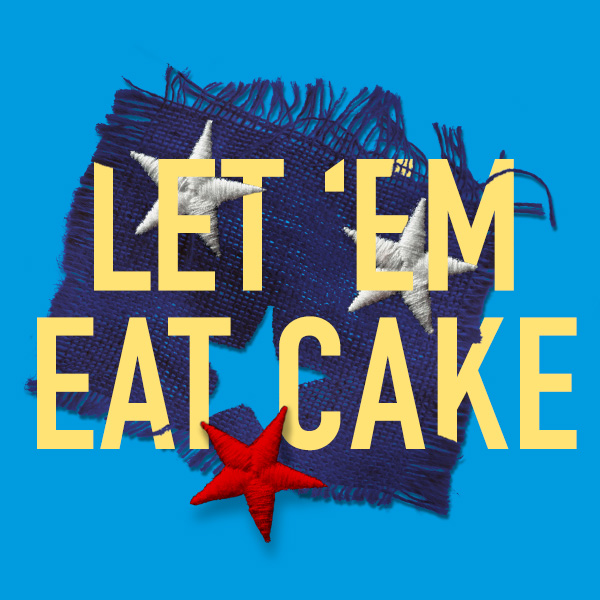 This was, I believe, the first high-profile airing of the score in the U.S. since the 1987 concert version performed at BAM, back-to-back with Of Thee I Sing, a very full program to say the least. That performance, conducted by Michael Tilson Thomas, resulted in a two-disc recording from Sony. 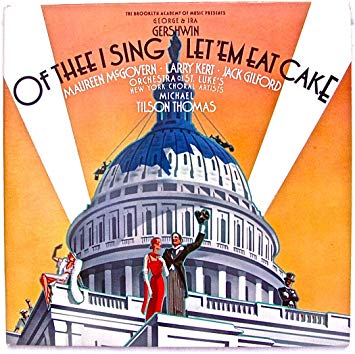 Terrific as the BAM performance was, I don’t recall getting quite the same electric charge as when Sperling raised his baton for the first notes at Carnegie Hall. The overture was absolutely thrilling, not only because of his conducting and the superb playing of the Orchestra of St. Luke’s, but the refulgent acoustics of the hall that could have blown the roof off.

In the moment, you’d be forgiven for thinking this the greatest thing Gershwin had ever written. Musically, in fact, the MasterVoices concert was quite exemplary from start to finish, and the cast certainly the equal of its distinguished BAM predecessors. The MasterVoices chorus, for their part, contributed a full-bodied and vigorous sound. 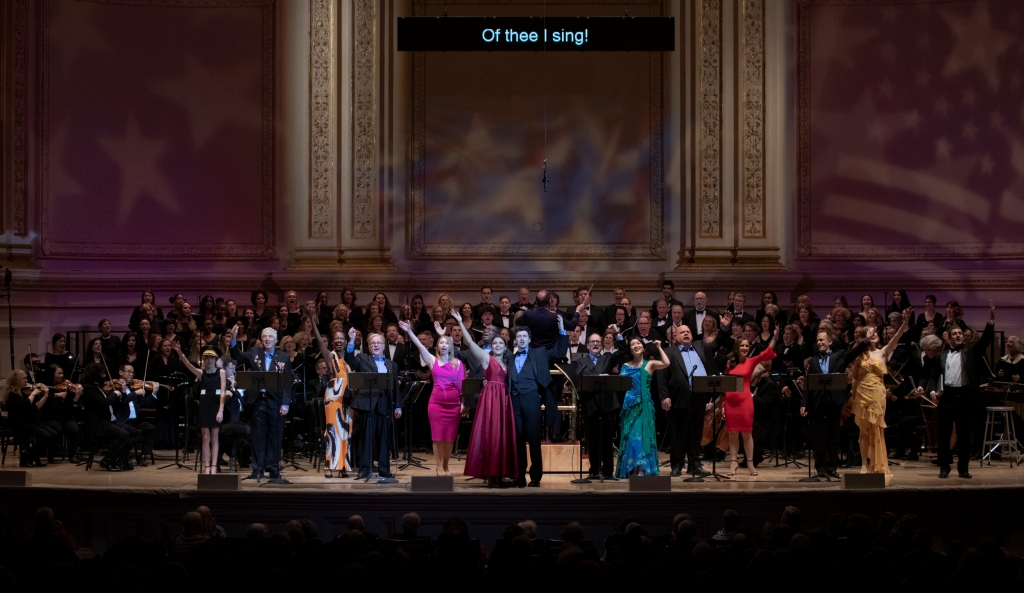 The cast at Carnegie Hall singing “Of thee I sing” in 2019, as part of the “Let ‘Em Eat Cake” performance by MasterVoices. (Photo: Erin Baiano)

The excellent and impressively versatile Bryce Pinkham (currently playing Bobby Kennedy in The Great Society) and the always reliable and amusing Kevin Chamberlin returned as President John P. Winterbottom and his sweet but dim-witted vice president, Alexander Throttlebottom, along with Chuck Cooper as Fulton, and Fred Applegate as Gilhooley. 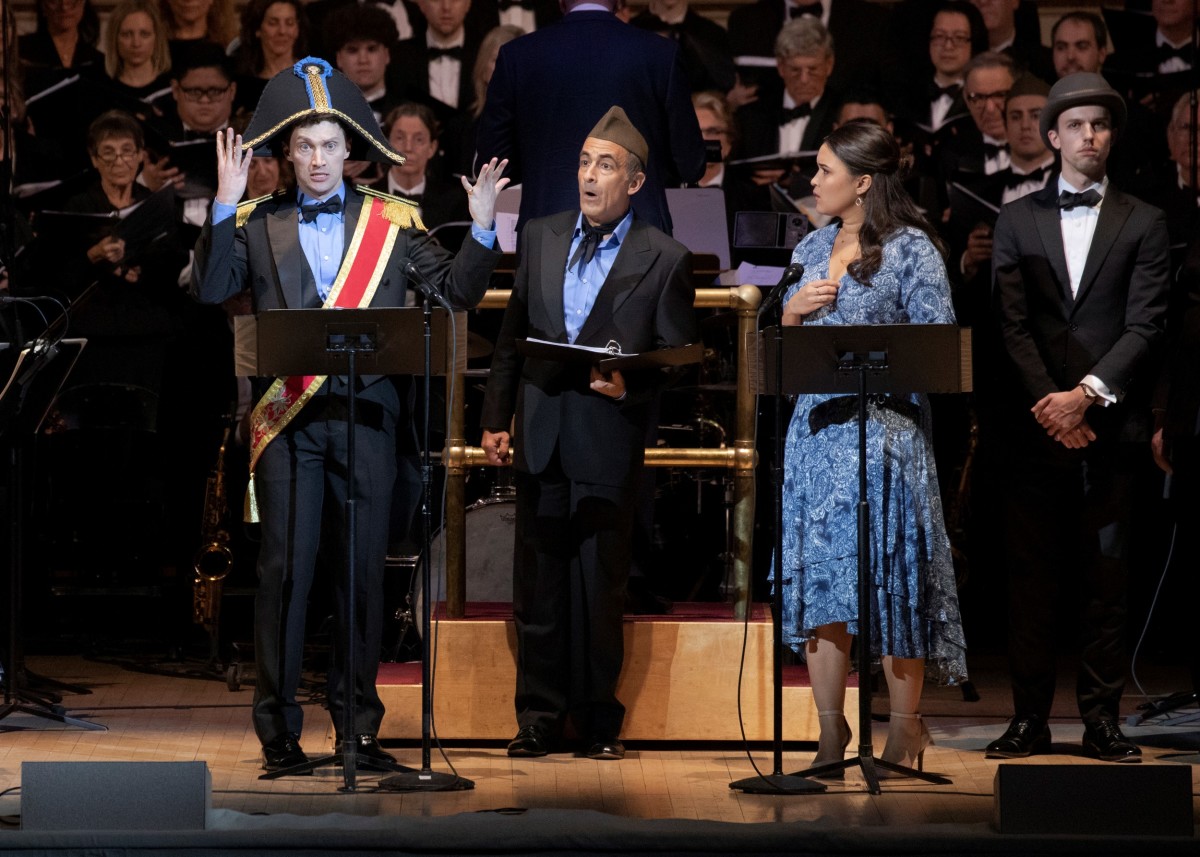 David Pittu, the French ambassador of the other show, was now the scheming revolutionary Kruger.

New to Let ‘Em Eat Cake, were several other Broadway pros, such as Bill Buell as General Snoofield, Lewis J. Stadlen as Louis Lippman, golden-voiced Mikaela Bennett (Penelope in Encores’ The Golden Apple as Mary Winterbottom; and Christopher Fitzgerald who doubled as Winterbottom’s political rival Tweedledee and narrator. Overall, the cast of Broadway pros couldn’t have been better. 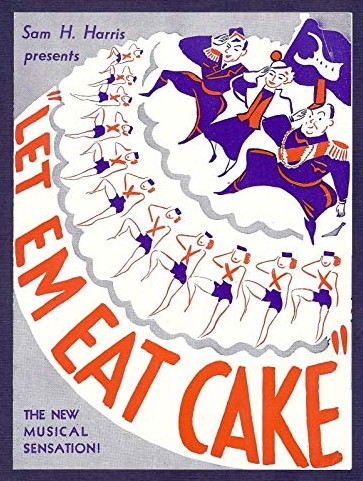 As polished a presentation as this was, though, the fact remains that the show is not quite the crowd-pleaser of its predecessor. There’s a distinctly sour tone throughout, as the likable Winterbottom in Sing here becomes a fascistic dictator. Some may sense disturbing parallels to our present times, and that may have been a factor in choosing it. But even audiences in 1933 were lukewarm to the show with the looming threats of the fascistic regimes of Germany and Italy. The Broadway production only ran 90 performances. And though George Gershwin’s highly skilled musicianship was justly admired, there are far fewer take-home tunes here than in the other. 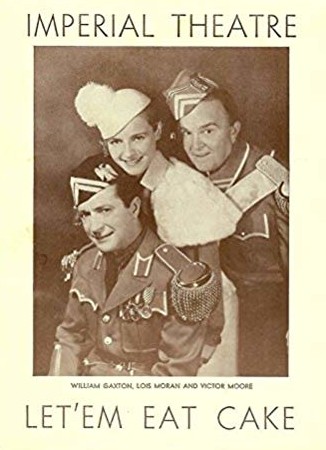 The original stars of “Let Em Eat Cake,” who performed the show at the Imperial Theatre.

A few of the Sing songs are briefly reprised here, and they pop up like old friends. Of the new numbers, Wintergreen and Mary’s “Mine” originally had the most traction outside the show and there are several attractive numbers but they tend to be woven into the overall fabric. Like Of Thee I Sing, it’s very much an operetta, with touches of Gilbert & Sullivan now joining other classical models such as Bach, the latter providing the blueprint for Gershwin’s use of counterpoint and verges on the operatic, as Janet Pascal notes in her interesting program note. 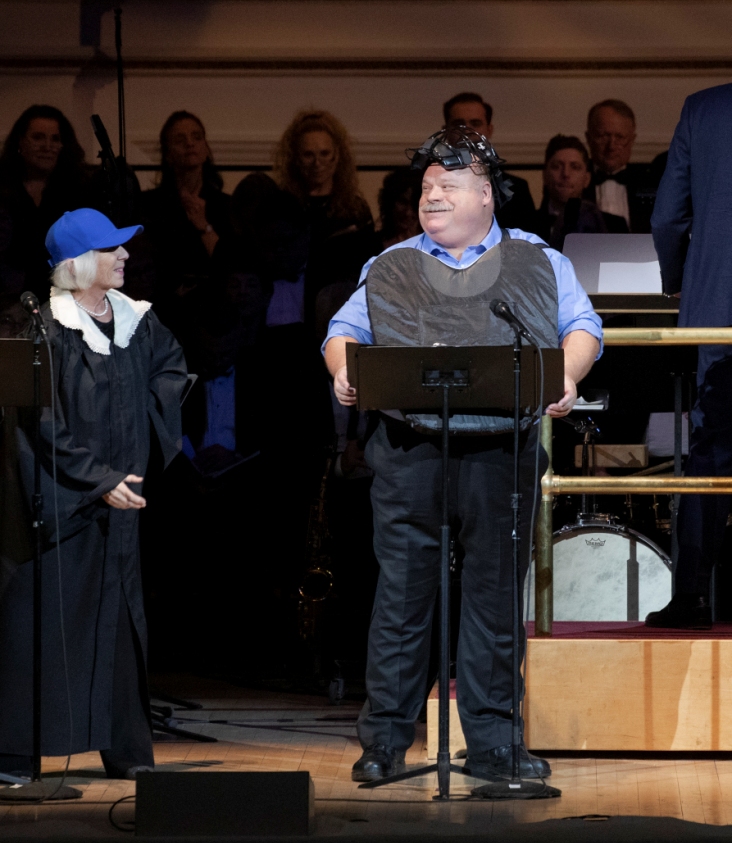 Gershwin, proud of his work, said, “I’ve written most of the music for this show contrapuntally, and it is that very insistence on the sharpness of a form that gives my music the acid touch it has—which paints the words of the lyrics, and is in keeping with the satire of the piece.”

On this occasion, there seems to have been some edits to the score, as Kruger and Trixie’s “First Lady and First Gent,” a very cute number heard at BAM, is missing here (as is the character of Trixie for that matter). On the other hand, “A Hell of a Hole,” the first part of “The Trial of Wintergreen” was missing at BAM and the subsequent recording, so I’m not sure which, if either, should be considered more definitive.

Kaufman and Ryskind’s book was performed in an abridged concert adaptation by Laurence Maslon, but the comic situations, however shortened, often seemed labored. 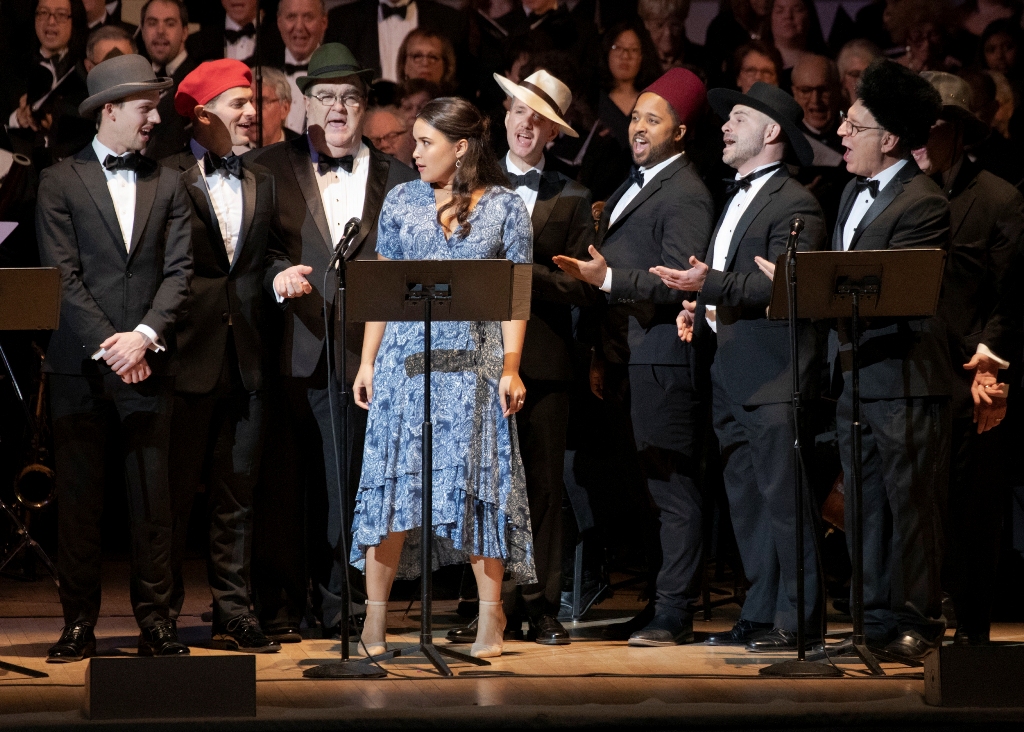 When the show begins, Winterbottom has come to the end of his term. He loses the popular vote to Tweedledee, but taking a cue from revolutionary Kruger, spearheads a revolution himself, and seizes back power to become a dictator. Eventually matters go south when the war debts promised to the army fail to materialize, as Wintergreen had promised. A climactic baseball game involving the Supreme Court justices and the League of Nations ends with calls for the death (by guillotine) of Wintergreen and Throttlebottom when the latter, acting as umpire, makes some unpopular calls. Eventually Mary, who has formed a new DAR, saves the day by winning over the female population with a Paris fashion show.

The work was thought mostly lost until the late John McGlinn set about reconstructing it with extant material, and Russell Warner created the superb, very authentic sounding orchestrations prior to the BAM performances.

Supertitles – crisp and clear – were projected above the stage making the lyrics intelligible. The cast interacted with each other, but this was basically a concert performance, unlike MasterVoices’ more elaborately staged Lady in the Dark this past April.

As it happens, Wooster’s Ohio Light Opera company will be mounting a fully-staged production of the piece in the summer of 2020. It should be interesting to hear the score in its full original context.