Most people would probably agree: operetta is all about performance. And, more to the point, about turning realities upside down with performances that are “mad-cap,” “zany,” “grotesque,” and “anti-realistic.” Even after leaving the over-the-top early years of Offenbach and Hervé behind, no one seriously believed that all those romantic gypsies, merry Balkan lads and ladies, Chinese princes etc are supposed to be “real.” The unrealness is part of the concept of operetta: it deconstructs reality and pushed boundaries. Women dressed as men, men dressed as women, actors painting their faces red (to be Indians, e.g. in Häuptling Abendwind), or yellow (in Mikado, The Geisha, Land des Lächelns), black (in Golden Dawn), or anything in between. But that does not seem politically acceptable anymore, and the discussion about this has been stirred (again) by the decision of the Metropolitan Opera in New York to not stage its new production of Otello with singer Aleksandrs Antonenko in “black face.” 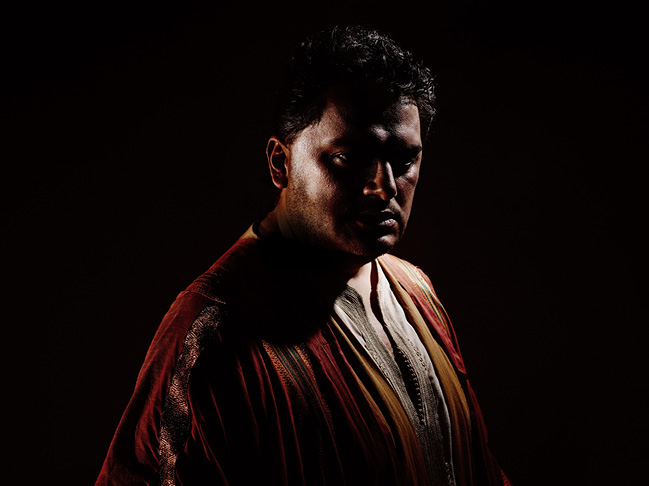 To promote their production, the Met sent out a photograph of the white Latvian tenor cast as the Moor of Venice. In that picture, Antonenko can be seen in half-darkness, but where the light does hit his face, is is apparent that he is wearing bronze make up. Just like most famous Otellos of the past, from Mario del Monaco to Placido Domingo and José Cura. No one accused them of being “racist” for appearing in “black face” – a performance practice associated with minstrel shows and the era of segregation. Seeing Mr. Antonenko in his “bronze face” provoked many angry emails, and the Met has meanwhile announced that their Otello will appear “white,” because “black face causes such a painful memory of minstrelsy and negative stereotypes.” That’s what Dr. Naomi André says, author of the 2012 book Blackness in Opera. 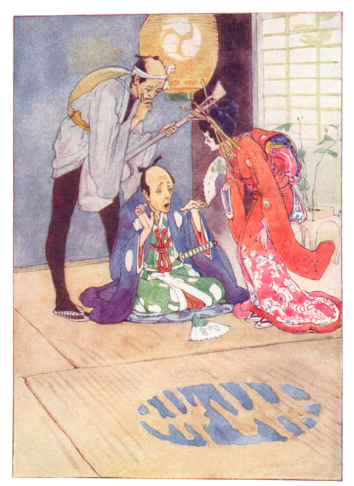 “The Story of the Mikado”, cover design.

There was a similar argument last year when an Asian journalist complained about a Mikado production in Seattle and called it “Yellow Face” – and offensive. Someone on the ORCA Facebook site recently commented on an article about the once popular British operetta The Geisha and said it could not be performed anymore because of the racial stereotypes presented there. (Where does that leave Madame Butterfly and Turandot?)

Operetta – certainly American operetta – has always played around with stereotypes, so called “stock characters.” They were mostly Europeans, mostly immigrants, whose accents were mocked and whose inability to understand English was the basis for jokes. There were the Scandinavians and the Germans, called “Dutch” from the word “deutsch.“ There were the Italians, the Blacks, the Jews, the gays in the form of “Nance” characters. “Although the intention was to create fun at a minority group’s expense, the long-range effect was, paradoxically, to socialize and assimiliate alien people through familiarity. Stereotyping precedes sensitive portrayal, which engenders equality and a share of political power,” writes Ethan in Anything Goes: A History of American Musical Theatre: „Bizarre as it may sound, such sophisticated works as Fiddler on the Roof […] are founded on the cultural penetration of the Dutch comic team of Weber and Fields.” 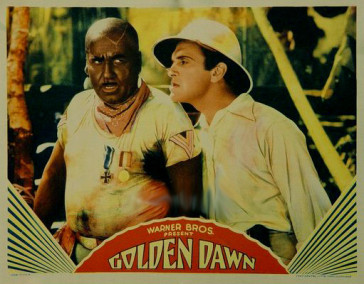 Should we not perform any of the works using such stock characters anymore today? May operetta, in the future, not poke fun at any groups, racial or otherwise? And if operetta becames totally PC, is it operetta anymore? Must we take Offenbach’s gender-bending L’île deTulipatan (The Island of Tulipatan) off the stage because the trans* community might find it offensive? Can The Mikado only be performed by Asians, and not by British actors painted yellow, or is the G&S classic “outdated” anyway and racist? May Countess Maritza not be performed because the Sinti and Roma might take offense regarding the stereotypical portrayal of gypsies? Or is it basically just the blacks we’re talking about, because their history is so much more terrible than that of the others?

And if we allow the shows in question and only cast racially appropriate actors, do we have to cast Belle Hélène with Greek singers from now on? And may Hedwig and the Angry Inch only be played by gay actors, or transsexuals? Where do we draw the line? (Is there a line anywhere in sight?)

The basic question I keep asking myself (and I do not consider myself a racist): why have all these groups in question forgotten how to laugh about stereotypes? I recall a performance of Ades Zable’s Burlesque Hostel Hermannstraße with a cross-dressed Turkish character wearing Muslima headdress. At my table in the theater there were two young Turkish women wearing exactly this kind of outfit. I wondered what they’d make of the actor playing Hatice? To my great surprise the two young ladies freaked out when Hatice appeared and cheered her, big time. They loved watching these stereotypes turned upside down and downside up, and laughed all the way through. When I myself watched Ian McKellen and Derek Jacobi in Vicious, playing two vicious old queens, I also laughed my head off at this portrayal of two elderly gay guys acting out every possible stereotype and making it a funny comment about their own community.

One of the very best modern operettas, 2006’s The Beastly Bombing by Roger Neill and Julien Nitzberg, played with all sorts of stereotypes in a hilarious modern and convincing way, close to Gilbert & Sullivan’s topsy turvey ideal and Offenbach’s madness. Audience reaction in Los Angeles was mixed, but that’s the point of operetta. It wants to provoke, it wants to ridicule, it wants to question conventions. It would be sad if all of this were lost, in the United States or anywhere else, just because we cannot place things in perspective anymore and scream as soon as anyone crosses another PC line.

For the record, I still love my Otello video with Renata Tebaldi wearing a blond stereotypical wig and Hans Beirer painted black (and him singing German to her Italian Desdemona). And I love the Beastly Bombing with its gay Jesus, who was a black gay Jesus in the Amsterdam production of 2009. I find the yellow faces in Mikado hilarious, as well as the red Indians in Vent du soir or Rose-Marie. And, yes, I’d enjoy seeing Kalman’s Golden Dawn with people painted black, perhaps with the white characters played by non-Caucasians painted white … And as for Hatice, she remains one of my all-time favorite Turkish delights. Like her two young Turkish fans demonstrated: it takes self-confidence to laugh about yourself being ridiculed on the stage. As long as it’s done in a loving and funny way I want to laugh. A production of Otello or Golden Dawn by the Ku Klux Klan is a different story altogether, or Neonazis staging Der Zigeunerprimas or Der Rastelbinder. But that’s not what I’m talking about here. So: play gypsy, sing gypsy. And paint your face anyway you like, as long as it’s “zany” and “crazy.”