When the San Francisco Opera puts on a show like Show Boat it raises expectations. The company has a chorus and full orchestra, so – unlike Broadway – it can actually play the glorious original orchestrations of Robert Russell Bennett. And a house that can cope with the demands of all the extras in Aida can also find enough actors and dancers to perform the many extras needed for Show Boat with its vast kaleidoscope of characters. Francesca Zambello’s 2014 staging, conducted by John DeMain, offers some attractively costumed scenes and singers, picturesque sets, but rarely anything thought-provoking or simply overwhelming. So is this new DVD worth having? 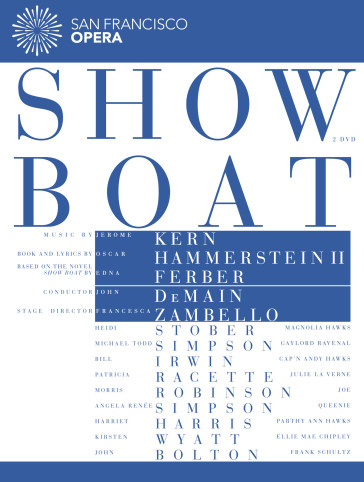 If you want a film version of Show Boat you probably already have the three classic Hollywood versions: the 1929 adaption is the earliest, made only two years after the world-premiere of the show on Broadway, staged by Florence Ziegfeld. It is a “mostly silent” film, using Foley Effects (specially created sound effects), a technique named after Jack Foley who performed the necessary sound effects while watching the film on playback. Then, in 1936, came the version still easily available on DVD today, starring Irene Dunne as Magnolia and Helen Morgan as Julie and Paul Robeson as Joe (“Ol’ Man River”). One user on the International Movie Data Base writes: “The fun part of the film wasn’t the music, but the story. It’s pretty entertaining and a key reason for that was Charles Winniger [as Captain Andy], who keeps it alive with good humor. […] The story has a good mixture of drama, humor, sadness, sentimentality and song.”

The same good story telling applies to the next version, which has Ava Gardner as an incredibly sensual Julie in 1951. On film, her songs were dubbed by Annette Warren, on the album issued by MGM/Rhino-Turner you can also hear Gardner singing her own material. Very well, we might add.

After that, there seem to have been no further film versions, not even stage productions issued on video or DVD. It’s not that there was any lack of possible productions that could have been filmed. Perhaps the film rights were tied up? Whatever the reason, this latest version from San Francisco breaks the spell and brings – for the first time – a stage production to the screen. 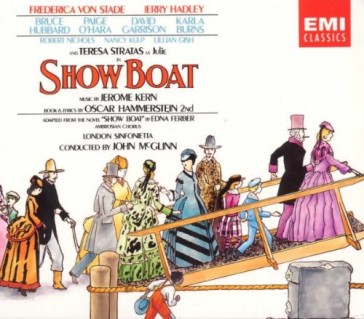 When conductor John McGlinn released his now-famous studio cast album on three CDs, back in 1988, he demonstrated how musically rich the original score for Ziegfeld’s stage production is. It offers expansive love scenes, brilliantly constructed, it offers quick, almost movie-like episodes, thrown in for contrast, it offers rousing multiple-chorus numbers, and vast dialogue scenes with stunning underscoring, silent movie style, to heighten the melodrama effect where necessary. In short, it was a revelation hearing this restored Show Boat. 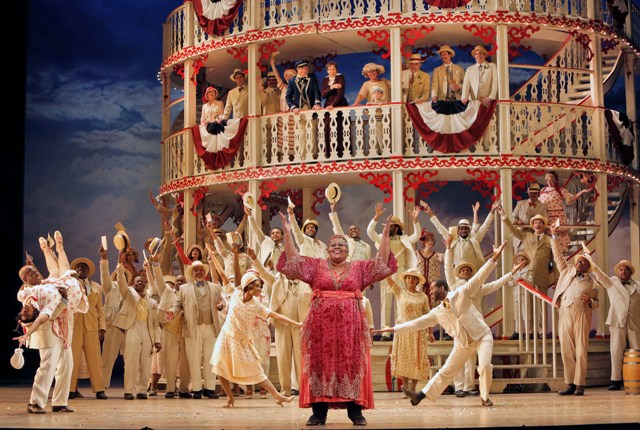 Truth be told, I expected such a revelation from the San Francisco Opera too; because they have the advantage over McGlinn to offer the visuals to his audio-only version. But that’s not what you get in the Zambello/DeMain production. They’ve trimmed the epic story down, shortened most numbers to fit into 144 minutes on disc 1. Visually, they avoid anything rough or dirty, instead they opt for an almost Disneyesque prettiness.

Disturbing lines such as “niggers all work on the Mississippi” have been changed to the standard “colored folks” line (McGlinn doesn’t do that, starting the show with a veritable shock).

The thought provoking miscegenation aspects of the story are not used by Zambello to show how problematic it still can be, in modern American, to be black. The “Ol’ Man River” sequences have no social stir, they are just lovely to look at arrangements, with some very lovely to look at dancers with defined bare chests.

The soloists are all good. The stand-out performance, vocally and visually, is Angela Renée Simpson as Queenie. The principal pair of lovers, Heidi Stober as Magnolia Hawks and Michael Todd Simpson as Gaylord Ravenal, works well together. She doesn’t dare be too “simple” in their first “Make Believe” encounter. But to give Stober credit: at least she tries. Simpson is a towering stage presence, and Stober looks great as the Vaudeville diva later in the story. However, she is simply blown away in the rag time sequences by the dancers. A true Vaudeville star would have demonstrated more stage presence and personal style than Stober in “After the Ball.” A pretty dress alone is not enough. 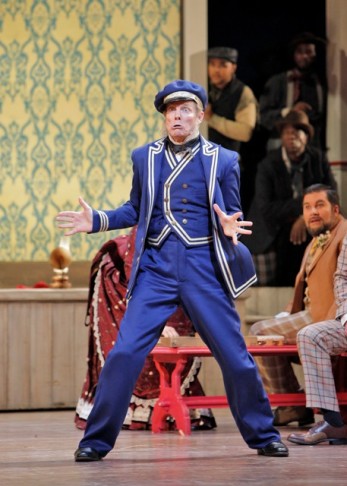 Bill Irwin is a great Captain Andy (together with Harriet Harris as Parthy Hawks). And the others are fun to watch, including Morris Robinson singing a polished Joe without a stain of sweat on his ironed shirt. And the comedians, Kirsten Wyatt and John Bolton as Ellie and Frank, are outstanding as vocalists and as dancers. The only serious miscasting, for me, is Patricia Racette as Julie. This role is one of the great Oscar Hammerstein stage personas, multi-layered, glamorous, doomed, fascinating. Racette is far too stiff to be any of these things. Her drunken version of “Bill” – one of the most beloved songs in the entire Jerome Kern oeuvre – left me utterly unmoved. If you want an opera voice for this, Teresa Stratas on the McGlinn album demonstrates that is can be done: that opera singers can find the pain and despair in this music; others, such as Kiri te Kanawa, have proven that you can add wonderful soprano melancholy to the song. Racette only sings it; and walks off. 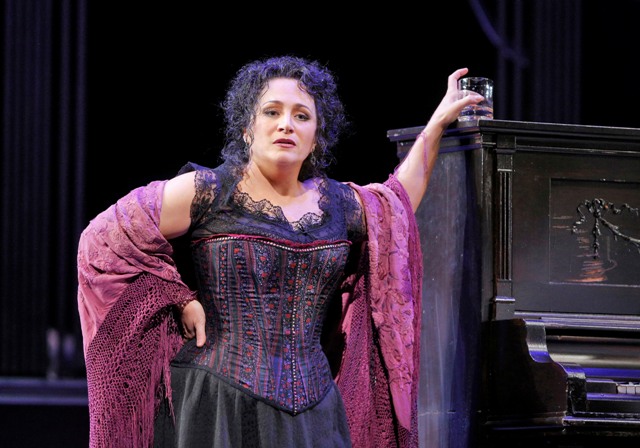 In the orchestra pit, the San Francisco forces are massive, and they play like that: massively and square. The many glorious details of the Russell Bennett orchestration are never brought forth, the bounce of the syncopated passages never jumps off the stage. Considering what conductors like Joseph Olefirowicz or Florian Ziemen have demonstrated with music from that era, this is never more than a standard interpretation, while Show Boat goes way beyond standard and demands greatness. 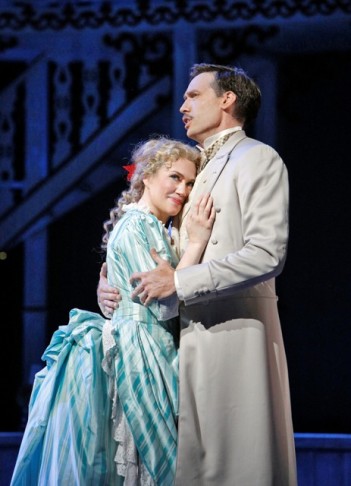 So, where does this leave things? Since it’s the first stage version on DVD, it’s a welcome alternative to the other film versions. It leaves a lot of room for improvement, but it also demonstrates – in a theatrical context – how effective Show Boat is as a piece of theatre. I hope this issue has broken the ice and there will be more stage performances available on DVD soon. They could highlight the revue aspects of the show better, or emphasize the melodrama side of the story better. Zambello has chosen a middle-way approach, even if Show Boat is not a middle-of-the-road kind of piece.

On disc 2 there are various short interviews with the cast members and production team. The whole package is distributed by Naxos in Europe. Considering that many opera directors in Germany have never heard of Show Boat – beyond “Ol’ Man River” – there is hope that this release might draw their attention to a show that absolutely screams “put me on the stage” in Germany and Central Europe with its rich theater scene, where there are orchestras, choruses and soloists that could perform the 1927 original version. The opera house of Linz, Austria, also put Show Boat on in 2014 and scored a big success – in a country that was considered exclusive operetta territory. And with a very dark “night-like staging” of the show. Interestingly, the original Show Boat contains many typical operetta moments that Kern effectively mixes with the American idiom numbers. This mix is what Viennese and Berlin operetta of the 1920s was all about too, as is demonstrated by Emmerich Kalman and Paul Abraham in their own way.

Even if John DeMain shies away from the more radical jazz age numbers of the score, and the lush operetta rubatos duets like “You Are Love” demand, any stage director and conductor elsewhere should easily see the possibilities of “Show Boat.”

Let’s see if the Kern/Hammerstein classic will conquer the classic European opera scene, after all: Théâtre du Châtelet in Paris? Vienna Volksoper? Deutsche Oper Berlin? Gärtnerplatz Theater in Munich? Or Komische Oper Berlin … who are specialized, after all, on jazz age titles?