The heat wave is back, in Germany at least. And the only appropriate way to cool off – operetta style! – under such late-August circumstances is jumping into the nearest lake, swimming pool or river. Not to mention the sea. Evelin Förster, renowned chanson researcher (Die Frau im Dunkeln: Autorinnen und Komponistinnen des Kabaretts und der Unterhaltung von 1901-1935) and curator (Berlin in der Revolution 1918/19), is presenting a selection of famous bathing songs at Theater O-Tonart on 29 August. The title of her program is “Herr Lehmann hat die Lu gezwickt…” Sommerfrische (Bade)Chansons, Bilder und Texte aus den Jahren 1910 – 1930.

Back in 2014, Miss Förster and her husband, photo historian Dr. Enno Kaufhold, published a wonderful coffee table book about Badekultur an der Ostsee von 1900 bis 1939, it includes many amusing photos and postcards from the time before World War 1, it documents the social changes (as reflected in bathing costumes) after 1918, and it also shows how a new conservatism arrives with the Nazis take-over power in 1933.

Also included in the book are various sheet music covers and song lyrics, reflecting the changing attitudes to bodies and gender politics; mostly they reflect a new self-assuredness of women who won’t hide their bodies anymore – but who also react in a new way to the so called ‘male gaze.’ 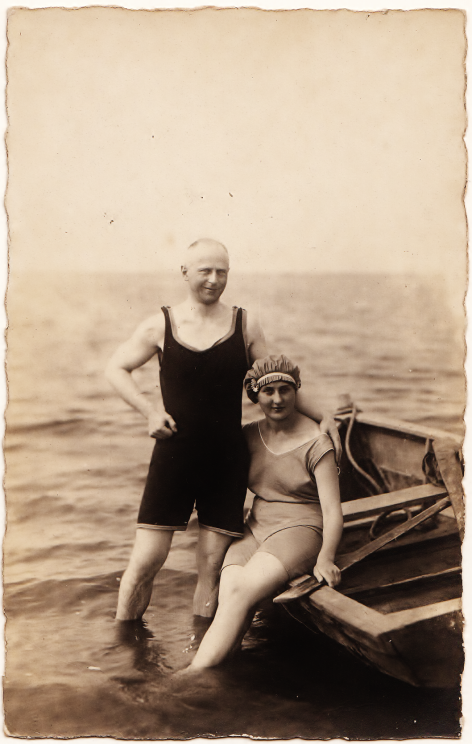 A couple in 1920, sitting on a rowing boat. (Photo: Evelin Förster Collection)

There’s the Victor Hollaender chanson Im Familienbad from 1908 (a long time before the dawn of the liberated Weimar Republic). In that chanson the story is told of how men and women can now swim together in mixed groups in the “family bathing area.” It’s a chance for lusty men to eye up the ladies. And for the ladies to eye up the men. One especially ardent young fellow goes after one of these self-assured ladies he had already noticed earlier. He says to her: I’ll marry you on the spot, but I need to check out your figure first. So they go swimming. He’s delighted by what he sees in the wet-and-wild and proposes immediately. But to his horror she replies that now she’s seen his body, too, she’s not interested anymore. She would have said yes to him dressed, but not undressed.

It’s a great example that ‘liberation’ works both ways. As it should!

While the Badekultur an der Ostsee book included many songs, there was no CD included on which you could actually listen to the compositions. So Evelin Förster’s concert on 29 August is a chance to enjoy a selection of these once-famous, and now mostly forgotten, chansons. 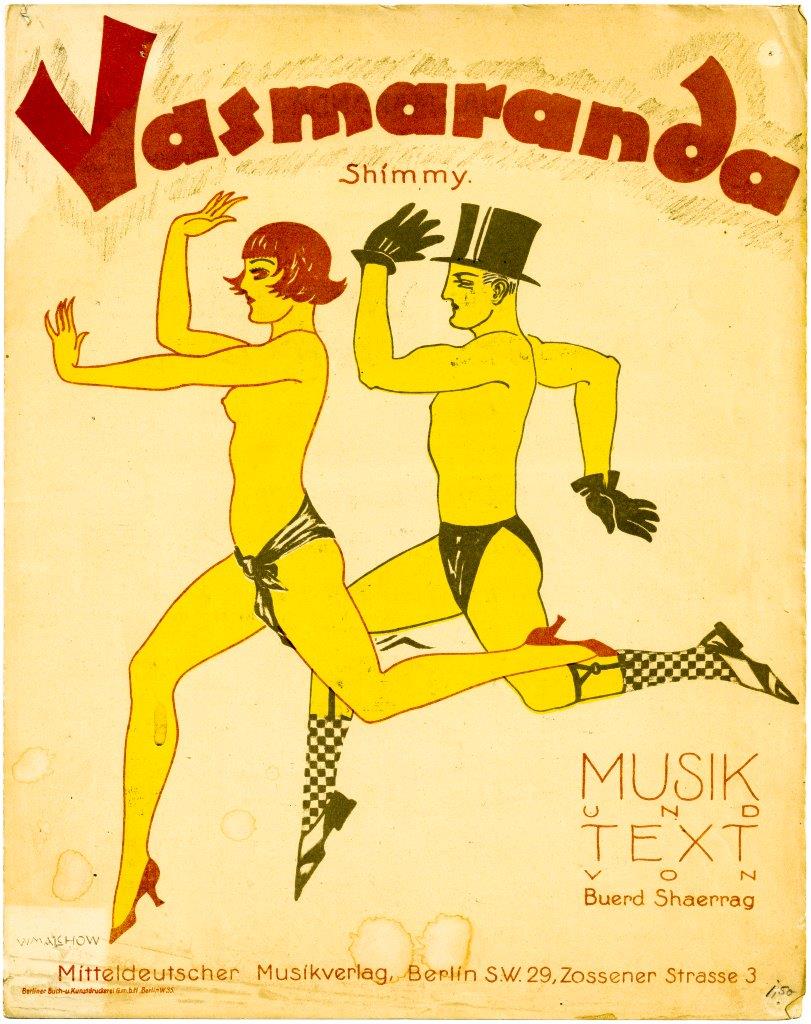 Among the titles in the concert are Die schöne Josefine in der Badekabine (by Stafford-Amberg, 1926), Am schönsten sind die Mädchen, wenn sie baden gehen (by Robert Gilbert and Anton Profes, 1930), the notorious Ich hab das Fräulein Helen baden sehn (by Fritz Grünbaum/ Fred Raymond, 1925) and the equally notorious Am Sonntag will mein Süßer mit mir segeln geh’n (by Robert Gilbert/ Anton Profes, 1929) which was recycled in Im weißen Rössl a year later. Gilbert wrote the lyrics for that Charell/Benatzky show. 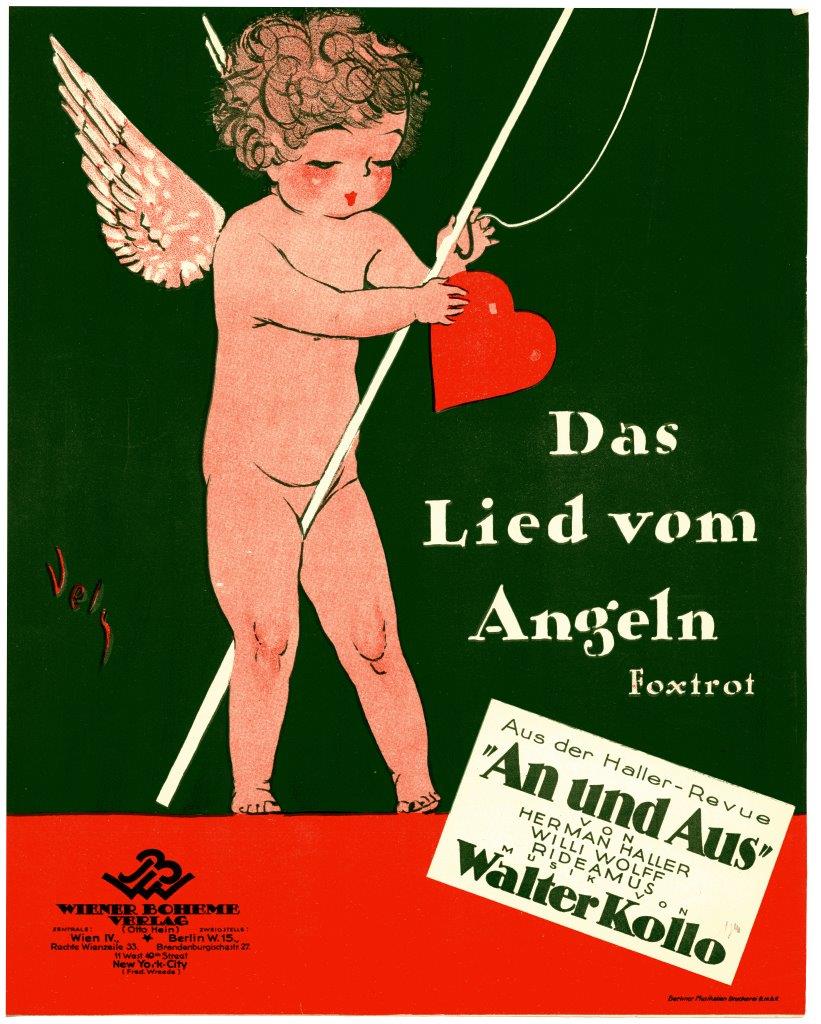 As usual, Miss Förster will not just sing these songs, but instead she will introduce each number with historical background, she will also include newspaper and magazine articles from the times that illustrate changing fashions and ideals of morality – and body shapes.

Putting the music in context will make it more enjoyable for those who do not know the titles. You will also get the see historic images, lots of them.

This concept of a “Musik-Text-Bild-Collage” as Miss Föster labels it, i.e. a collage of music, texts, and images, has worked well in the past. And Miss Förster is repeating it in September with a program on called Straßenkämpfe. Frauen lernt wählen. Berlin tanzt („Zum 100jährigen Bestehen der Volkshochschulen“). In October, a concert dedicated to sports will follow at Hannover’s Museum for Caricature, Wilhelm Busch.