You might wonder whether they are serious – ‘them’ being the French-German Kultursender arte. They are celebrating the 200th birthday of French-German composer Jacques Offenbach (1819-1880) by offering live performances of two of his most famous operettas as a stream, one The Grand-Duchess of Gerolstein from Cologne Opera, starring Jennifer Larmore, the other the much talked about new Orpheus in the Underworld from the Salzburg Festival, their first ever production of an opéra bouffe in 99 years. It’s directed by Barrie Kosky and caught the attention of the international press, from The New York Times in the USA to The Financial Times in the UK. 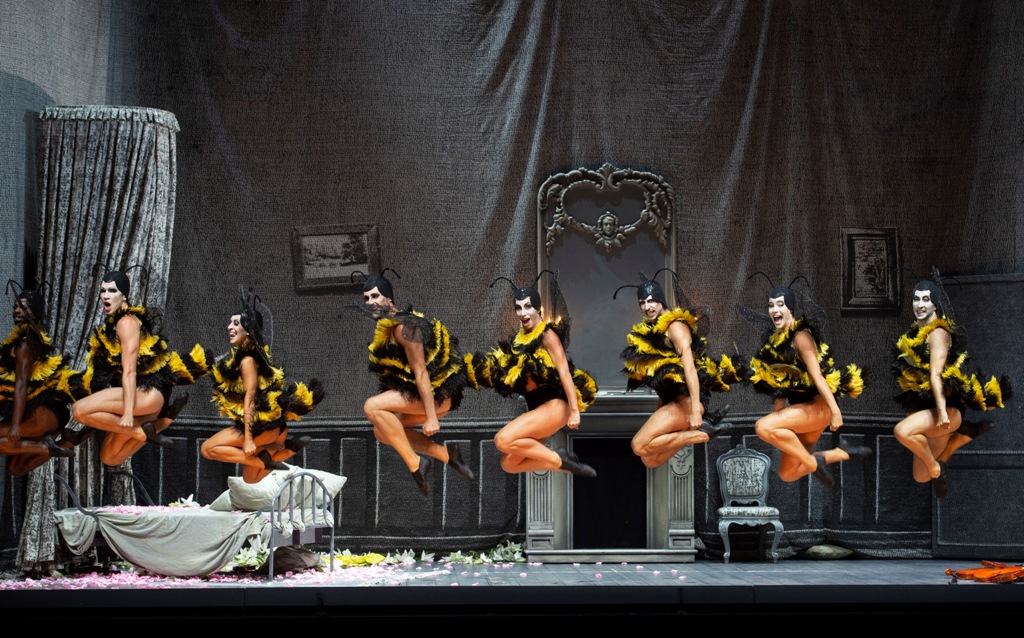 One thing the two productions have in common is: they both present the music with the original French words attached to it and the dialogue in a German translation. (Why? Who knows.) Another similarity is that they both use traditional opera singers that can offer wonderful vocals (especially in the case of the Salzburg production) but have serious problems in terms of comic acting and delivering spoken words.

So what can an inventive stage director do about this?

Well, he or she could have said to the casting director beforehand that he or she wants a different kind of performers. As Barrie Kosky has demonstrated, again and again, any operetta performance stands and falls with the type of actors employed. Why in God’s name the Salzburg Festival thought it must present Orphée aux enfers as a novelty in its programming and then not engage a novel type of cast remains their secret. Especially since such novel performers are around. (If one bothers to looks outside the “classical music” box.) 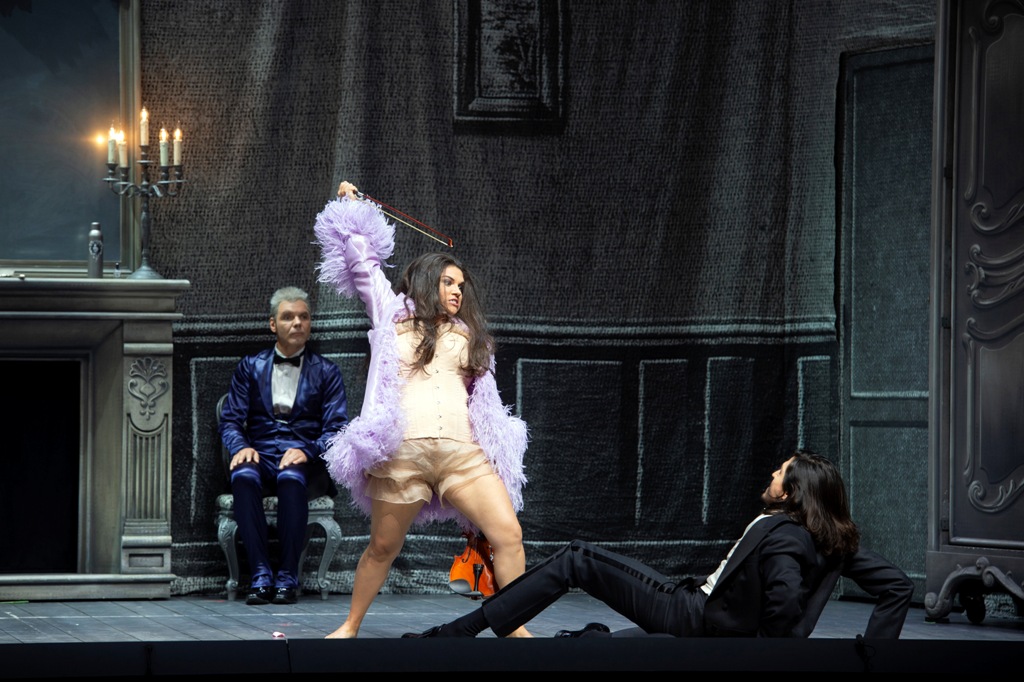 The act one duett between Eudydice and Orpheus, sung by Kathryn Lewek and Joel Prieto, with Max Hopp (left) watching and waiting. (Photo: SF/Monika Rittershaus)

Rather than see his mad-cap vision of operetta and Offenbach killed by opera singers who cannot deliver dialogue with the nuance and timing needed to make an opéra bouffe work, Mr. Kosky did the only thing possible under such circumstances: he brought one of his celebrated Berlin operetta stars along and had Max Hopp speak all the dialogue in the show, with the opera singers lip syncing and over acting in a Muppet Show kind of way that looks as if they’d all taken ecstasy pills before the performance.

It’s a too much of everything. And it reminded me of the fact that Mr. Kosky’s over-the-top approach to operetta works best if the actors on stage can channel his topsy turvey into structured movements. Max Hopp certainly can, or someone like Dagmar Manzel can do it too, turning the madness into supremely effective art. The Salzburg cast tries.

Because in this staging the story is more or less all over the place, the narrative is only moderately comprehensible. Which lead to the critic of the Financial Times, George Loomis, to state that Orphée aux enfers is “a work that, despite its infectious musical numbers and loopy satire of a familiar operatic subject, has a hard time holding together.” Instead of crediting this to Barrie Kosky, the critic calls it Offenbach’s “fault.” Mr. Loomis in return credits Mr. Kosky for not trying to “disguise this fault.” 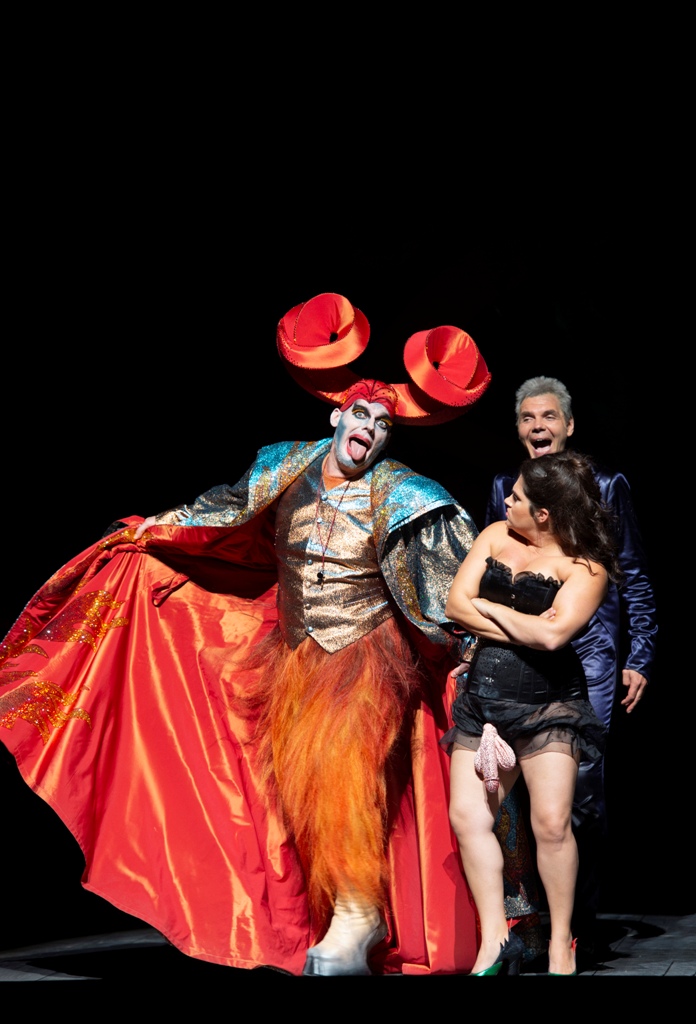 Robert Braunmüller in the Abendzeitung states that the “voids” in this parody of the ancient Orpheus myth – which have “lost all of their scandalous potential,” according to Mr. Braunmüller, and are “devoid of deeper meaning” – have been “pasted over” by Kosky and his choreographer Otto Pichler with drag and ballet. (Feel free to discuss.)

For me, there was so much “pasting over” that at times the glorious original was hardly recognizable. Some might see that as a plus: reducing Offenbach’s 1858 work to a hilarious modern romp filled with never ending ecstatic squeaking and copulation. 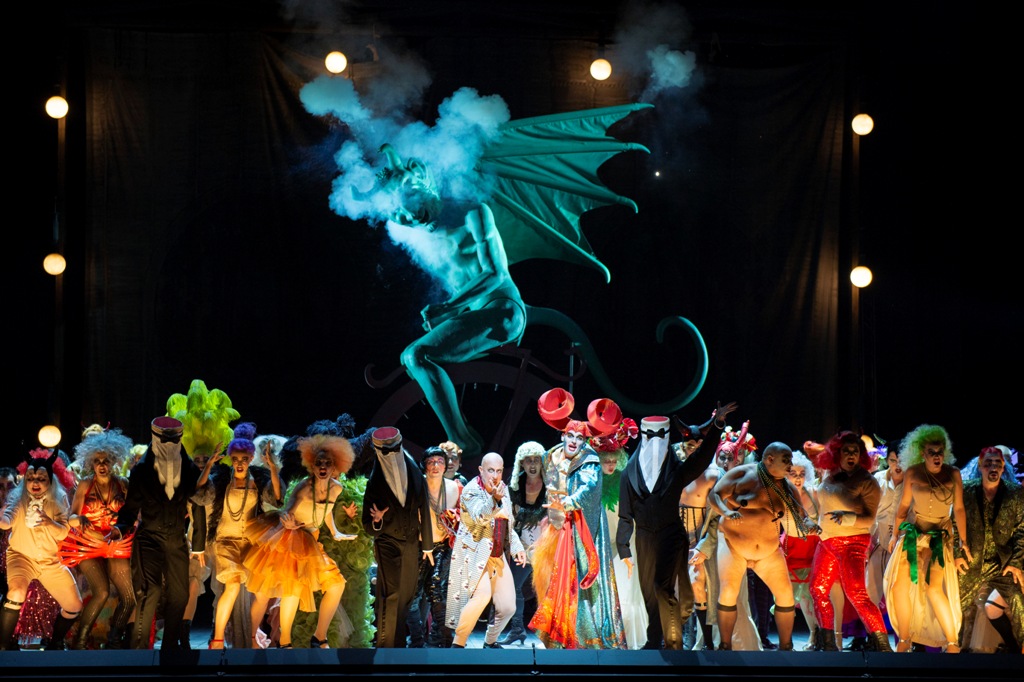 The big party scene in the underworld, at the Salzburg Festival 2019. (Photo: SF/Monika Rittershaus)

But the modernity – which Mr. Kosky points out in an interview during the interval of the arte broadcast – of Eurydice deciding for herself who she wants to live with and fuck with, no matter what social conventions dictate, is lost in this colorful slap-stick production. Because good slapstick needs real slapstick actors with perfect timing. Which you cannot just learn in a six week rehearsal period.

Still, the singing of Kathryn Lewek as Eurydice is exquisite, and Marcel Beekman as Aristée/Pluton brings an interesting ‘white’ sound to the role that stands out, in a good way. The rest of the cast also sounds impressive, though they often come across like they don’t know what’s really going on. With Joel Prieto as Orpheus presenting the most dazzling long hair since Olivier Martinez appeared in The Horseman on the Roof. Mr. Prieto, too, looks and sounds interesting but cannot really fill the role, not even with the help of Max Hopp. 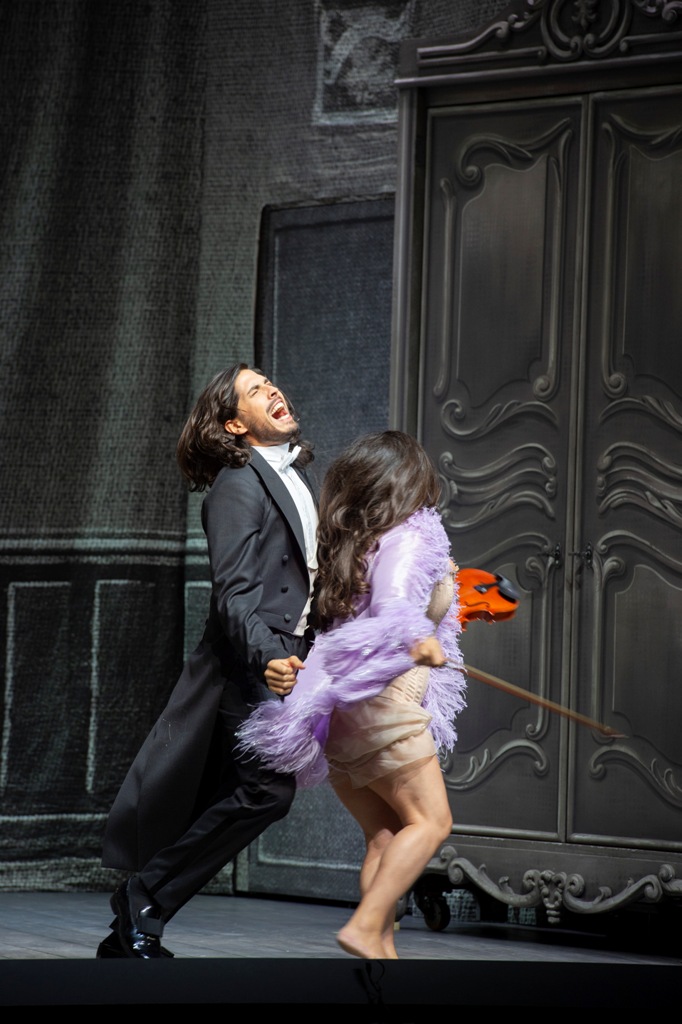 A marriage of the rocks: Joel Prieto (l.) with great hair and Kathryn Lewek in “Orphée aux enfers” at the Salzburg Festival, 2019. (Photo: SF/Monika Rittershaus)

At the very beginning of the Salzburg evening, Mr. Hopp translates Anne Sofie von Otter’s Public Opinion monologue (from Swedish, I assume). You realize, right away, what a difference there is between him reciting, and an opera singer doing it. (You might also think: thank God Mr. Kosky had everyone lip synced!) 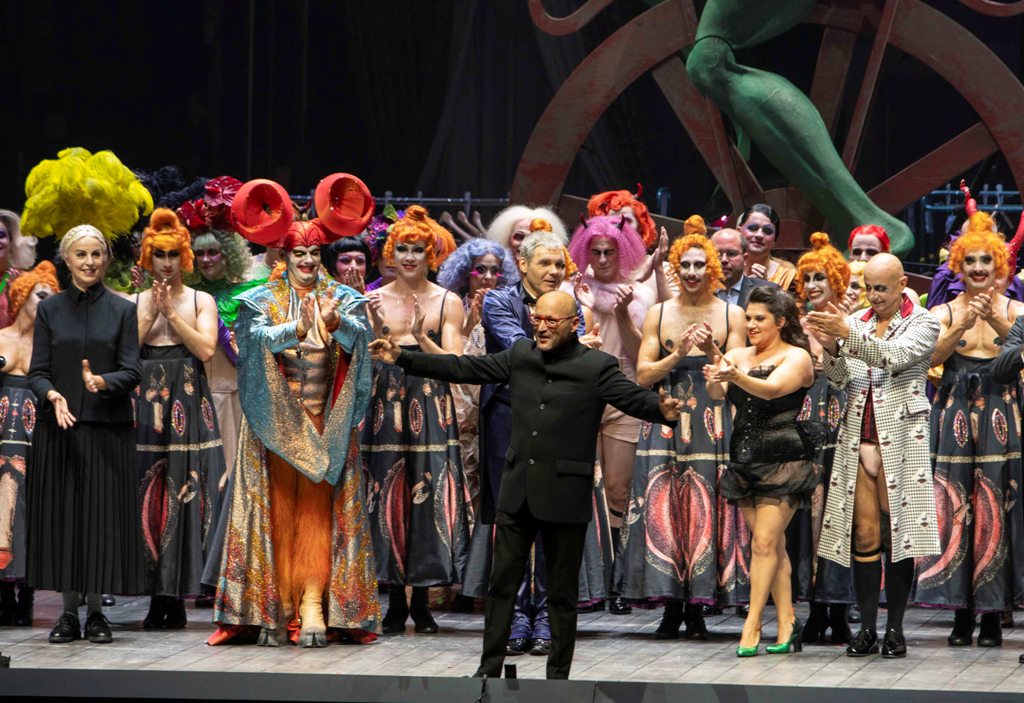 Enrique Mazzola conducts and has the Vienna Philharmonic Orchestra at his disposal. Yet their luxurious sound is mostly wasted here, because Offenbach’s music demands a different kind of approach, different accents, a different drive. Some of the tempi are very weird, as is the mixing of versions. Why not play the expanded 1870s version if you want a “festival event” with lots of music; or stick to the minimalistic original for maximum comedy effect? (This version is pretty close to what Marc Minkowski recorded, years ago, also mixing versions.) 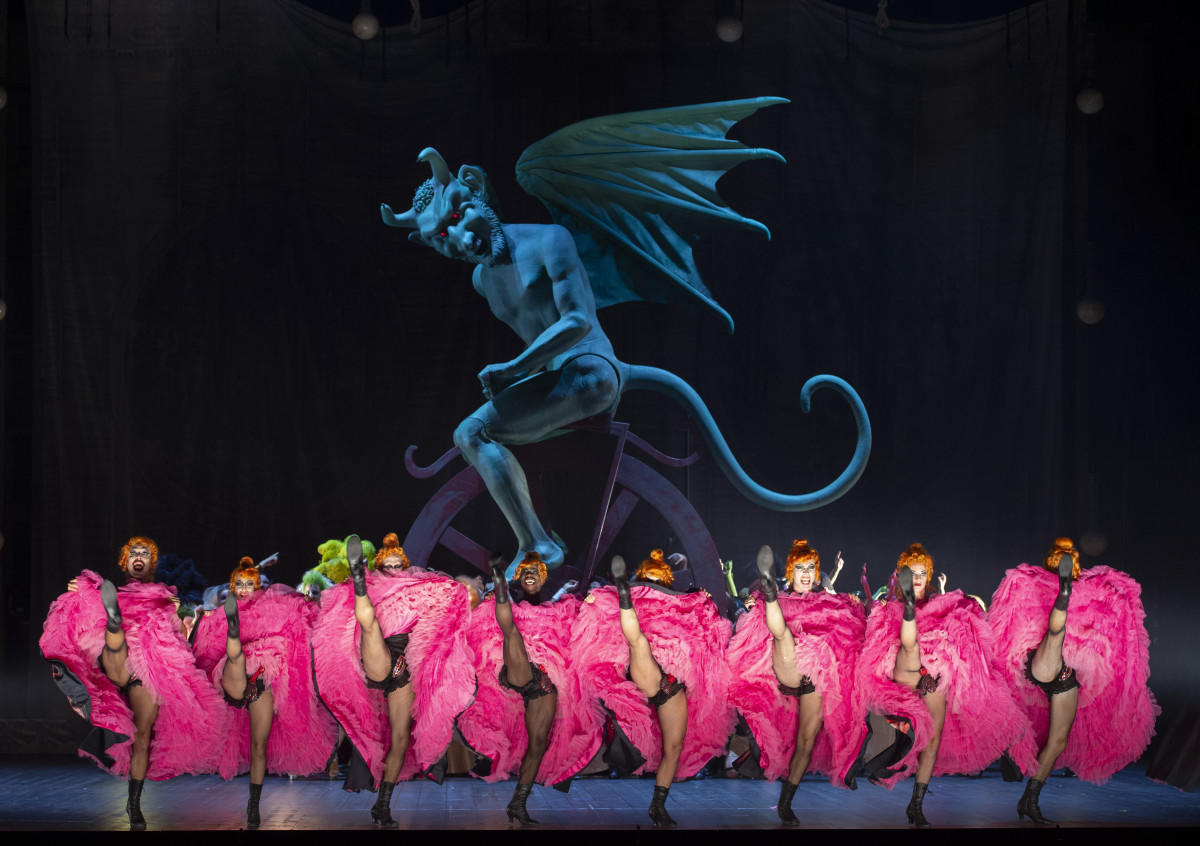 Watch out for the Swarovski: the cancan dancers in “Orphée aux enfers” at the Salzburg Festival, 2019. (Photo: SF/Monika Rittershaus)

The production can be streamed directly on the arte homepage. In the filmed version you also get a close up of the (male) cancan dancers who lift their pink skirts to reveal underwear that has Swarovski female genitalia sewn onto it. There is more of this kind of gender play throughout. The production will transfer to Berlin’s Komische Oper in 2021 – and perhaps the gender bending side of this Orphée aux enfers will work better there? I’m pretty sure it will.

The other Offenbach that arte is offering this summer is the Cologne production of Grand-Duchess of Gerolstein. It’s a staging by Renaud Doucet set in some bizarre camp which looks more like Woodstock than a military base. (Costumes and sets by André Barbe.) Personally, I found the staging so embarrassing that I tuned out after the Regiment’s Song. 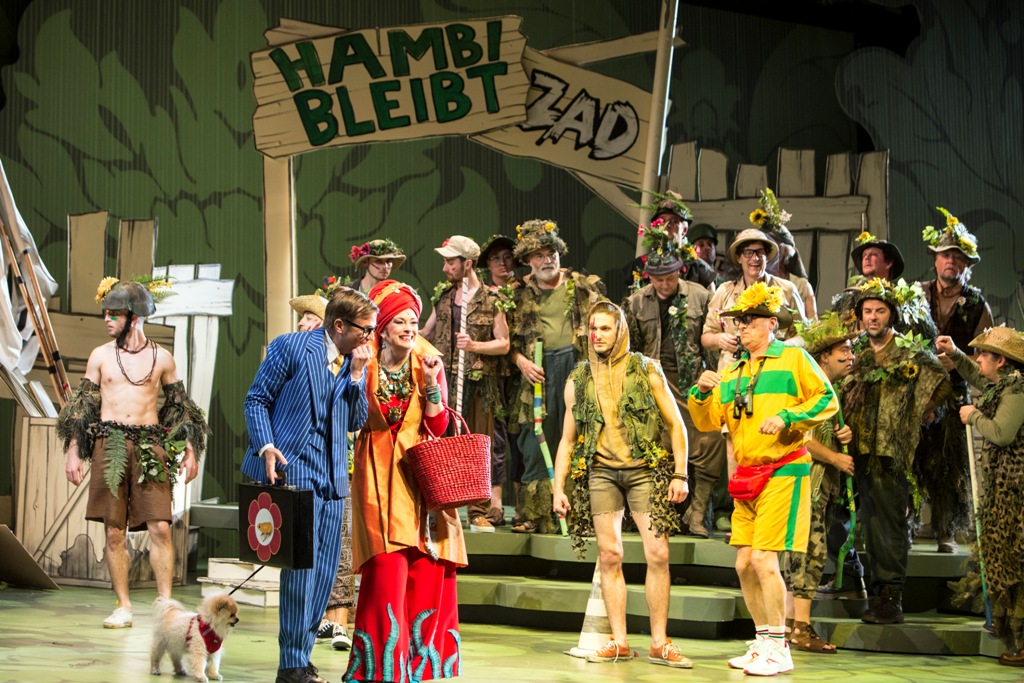 Because without someone like Max Hopp saving the dialogue sections, at least partly, and without the whirlwind of Kosky’s and Otto Pichler’s genius brushing through, this operetta resembles a third rate drag show more than a world-class opéra bouffe. And even in a third rate drag show the actors and actresses would probably demonstrate more ‘conviction.’ And that is also true with regard to François-Xavier Roth’s conducting, which is simular to Enrique Mazzola’s. 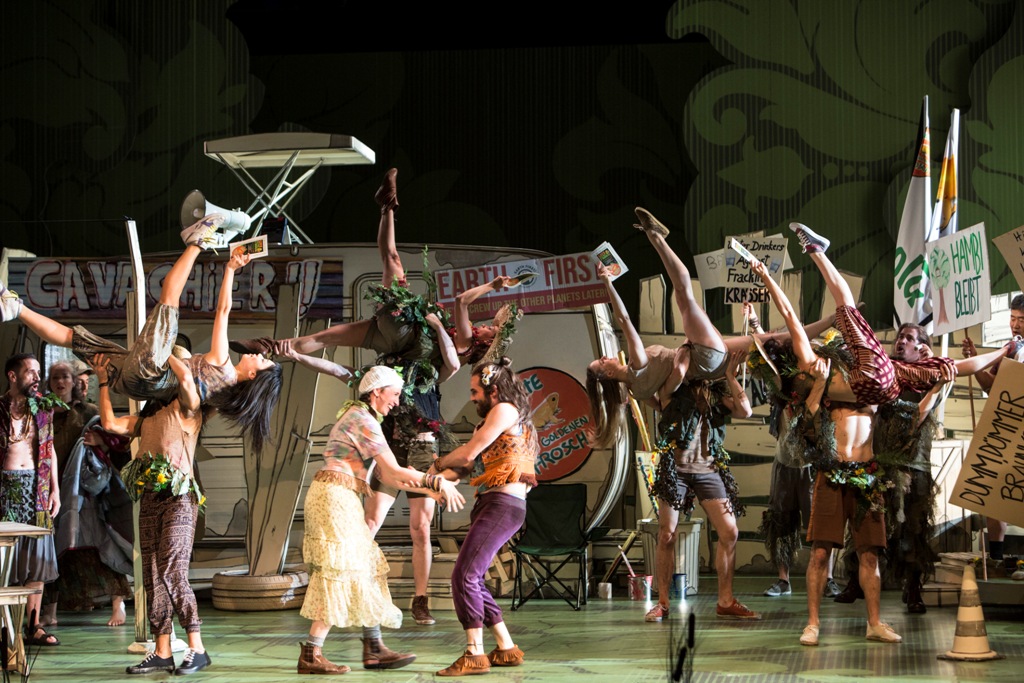 If this is arte’s idea of celebrating Offenbach’s 200th birthday, then I believe it doesn’t do the Kultursender much credit.

But again, judge for yourself. Here is the link to their stream.

What puzzled me greatly was why Anne Sofie von Otter in Salzburg has to come out after the interval, dressed like Auntie Mame, to sing an Offenbach song, almost exactly the same way Jennifer Larmore is dressed in Gerolstein. Is that supposed to be some hidden reference, an insider “arte joke”?

Where Are the Documentaries?

And why does arte – so famous for its documentaries – not have a proper in-depth Offenbach film on offer, expect for a three minute miniature portrait? Surely, there is enough historic material to use for a great documentary.

On the positive side: when big international newspapers report on Offenbach and operetta, at such length and with such enthusiasm, there might be a chance that word spreads that it’s worth staging these shows, preferably with a more suited kind of cast. Max Hopp certainly points the way here, his solo as Hans Styx easily putting everyone else to shame.

And just for the record, maybe George Loomis should read the new Offenbach book by Laurence Senelick before stating again that a show such as Orphée aux enfers has difficulty “holding together.” It certainly does not. And there are no “voids” here either, unless you insert them yourself. But don’t claim it’s Offenbach’s “fault” in that case.

Independently of whether you like Barrie Kosky’s constant hyper-activity on stage and (sometimes) tossing overboard anything resembling ‘plot,’ and independently of whether you believe that his dizzying vision of operetta is the ‘only’ one imaginable as an alternative to the standard versions on offer elsewhere today: Mr. Kosky and the Salzburg Festival are definitely a step (or two) ahead of what the usual operetta suspects are doing with the genre in Austria, on a daily basis. Which is: desperately clinging to formulas that have long ago become outdated and have infantilize the art form in way that Barrie Kosky’s ‘infantile’ approach of seeing operettas as a mad hatter’s birthday party makes look very old.

In the end, that promising news.