Most Germans are familiar-very familiar-with the White Horse Inn. That’s because the film version starring Peter Alexander and Waltraud Haas has been on German (and Austrian) TV forever, repeated with high frequency. It’s the German equivalent to The Sound of Music in the English speaking world. Everyone knows it, many hate it, and many love it as a high camp romp. 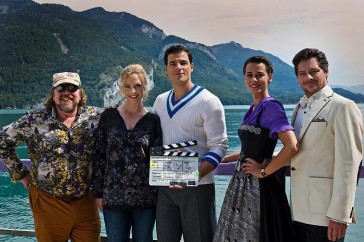 The cast of the new film version. (Photo: Senator Film)

Last year, there was a new film version that wanted to cash in on the current Rössl boom throughout Europe. (Remember the original 1930s jazz score of the show that was rediscovered? It’s been played by many theaters from Dresden to Berlin and Munich.) Anyway, the film version directed by Christian Theede has little to nothing to do with the 1930 original. The plot is only vaguely the same, since the emphasis is now put on the lovers Ottilie and Dr. Siedler, not the waiter Leopold and the patroness of the hotel, Josepha. They are still part of the story, though, so don’t worry. All the elements of the story are there, somehow, just rearranged.

The music has also been rearranged. It’s now a wild mix of Bollywood and even wilder pop beats. The result is not something that will warm the hearts of true Rössl fans. And apparently, it didn’t warm the hearts of others either. The film flopped at the box office and disappeared quicker than it came out.

Now, it’s available on DVD, a much better suited format for this Rössl update. The DVD is worth watching for various reasons. First, there’s a certain mad-cap charm about the überkitsch way the director stages the story, filmed on Lake St. Wolfgang in Austria. Second, there is real chemistry between the two stars, Tobias Licht as Dr. Siedler and Diana Amft as Ottilie.

You could say they are the best – and most characteristic – Rössl lovers ever put on film. Watching them interact is a joy.

Considering that Tobias Licht has appeared in various musicals, Chicago and Funny Girl among them, and considering that he said to the Operetta Research Center that he loves operetta and would very much like to sing it on stage too, not just on film, it’s amazing that casting directors haven’t queued to sign him up for a project. With his relaxed stage presence, his dashing looks à la Cary Grant and his easy singing voice, Tobias Licht would be ideally suited for many operetta classic.

If you don’t believe me, have a look yourself!