When was the last time you saw a new 1947 musical for the first time? Roundabout Theatre Company and Universal Stage Productions have joined forces to present a stage adaptation of Irving Berlin’s 1942 Paramount film Holiday Inn, which originally starred Bing Crosby (as Jim Hardy) and Fred Astaire (as Ted Hanover). 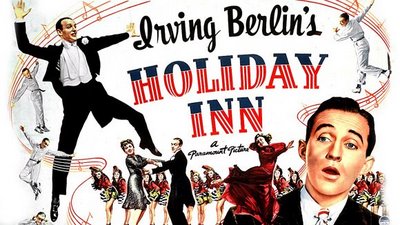 Even if you can’t recall Marjorie Reynolds or Virginia Dale in the distaff roles, you’ll likely know the story of Jim Hardy quitting show business to run a farm in Midville, Connecticut. When the farm starts to fail, Ted Hanover and his friends pitch in to save the day: “Hey kids, let’s put on a show!” Jim Hardy’s inn opened to the public for holiday weekend trade.

The film’s concept derived from an abandoned revue project of Berlin’s from 1939. As a morale builder during World War II, Irving Berlin offered a baker’s dozen songs old (“Blue Skies”) and new (“White Christmas”) thematically tied to a calendar of holidays. You can also expect to hear the film’s chestnuts “Let’s Start the New Year Right,” “You’re Easy to Dance With,” “Be Careful, It’s My Heart,” “Happy Holiday” and more.

While there’s nothing fundamentally wrong with the basic idea of transferring Holiday Inn from film to stage, raiding Irving Berlin’s catalogue to create a festive song stack celebrating the Great American Song Book, real problems arise from the pedestrian execution.

Credit director and co-librettist Gordon Greenberg with improbable plot choices and absurd transitions that beggar credibility, even by the hoary conventions of musical comedy.

Greenberg and Chad Hodge’s dialogue is often downright silly or corny when imagination or wit demand better. With a generic style one might label “musical comedy 101,” Greenberg has directed his talented cast to go for the obvious.

There’s the crass, gum-chewing dumb blond, Jim’s fiancée, Lila Dixon (Megan Sikora) who’s never as funny as she should be. There’s the smart-ass kid Charlie Winslow (Morgan Gao), whose adult wisecracks and savvy insight should be fun, but prove mostly irritating. Or the Mason Farm Miss Fix-It (the much-talented Megan Lawrence) who’s compelled to squeak like Minnie Mouse. Dancing with the Stars and High School Musical veteran Corbin Bleu is tasked with filling Fred Astaire’s dancing shoes as Ted Hanover, which assignment he does with nimble aplomb. Bleu smiles a lot and then a lot more, again. Apart from stealing Jim Hardy’s girlfriends twice, we begin to wonder if he’s capable of anything more? Surprisingly, only the show’s two romantic leads, Bryce Pinkham (as Jim Hardy) and Lora Lee Gayer (as former farm-owner Linda Mason) prove capable of making the awkward boy-meets-girl relationship seem either interesting or real. Their stumbling through mutual attraction is often endearing, and together they nearly save the show. 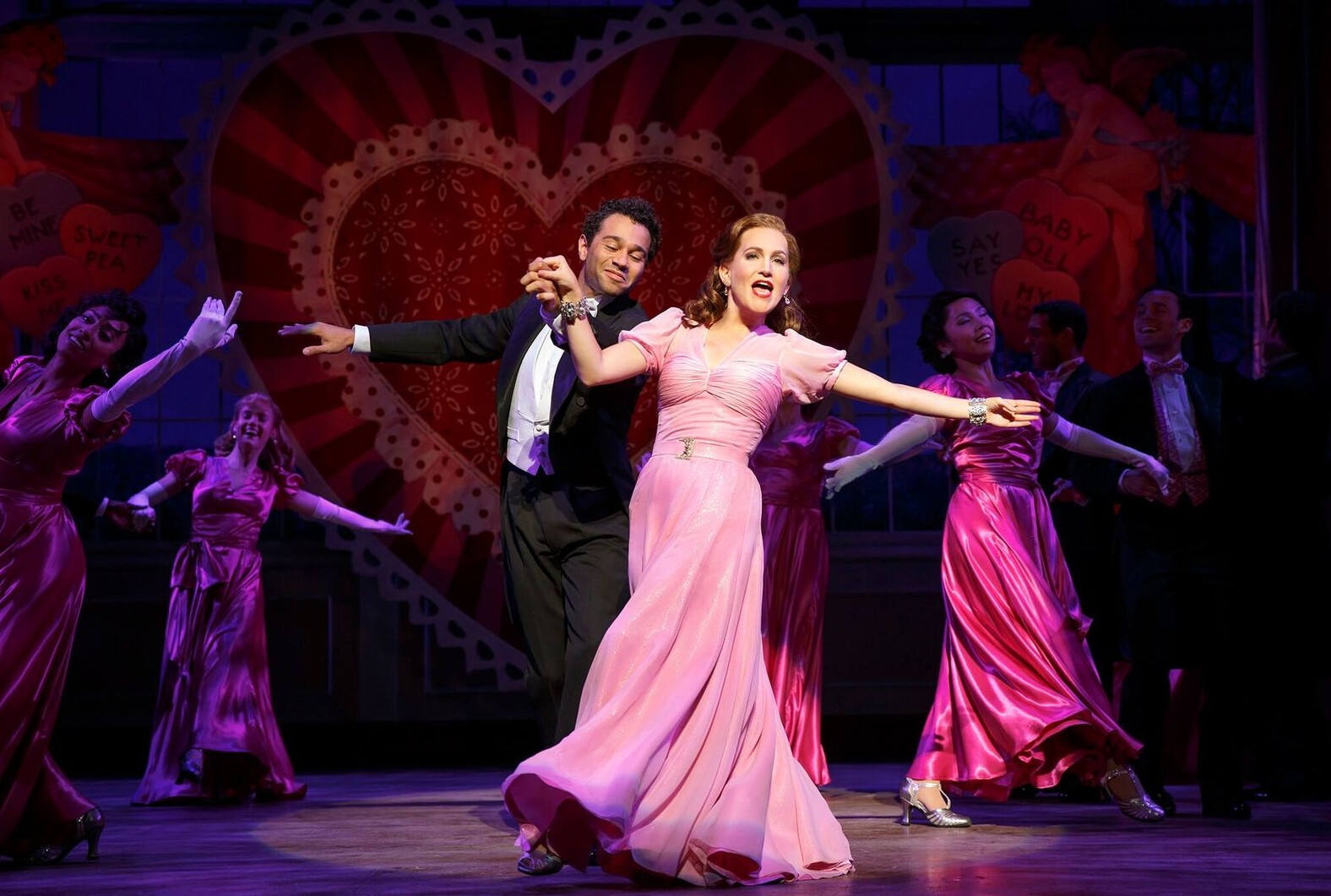 Greenberg and Hodge have wisely excised Bing Crosby’s blackface tribute to Lincoln, “Abraham,” yet fleshed out the script with eight more Berlin songs. Gone also is “I Can’t Tell a Lie.” Perhaps they meant to drown or swamp the audience with Irving Berlin songs? But shoe-horned into the plot are “Steppin’ Out With My Baby” (from Easter Parade) as a generic Act 1 opening, “The Little Things in Life,” (1930) which allows Jim Hardy to pine for a simple life in the country. “Marching Along with Time” (1938) permits Jim and Linda to meet cute, as each struggles with the inevitability of change.

“Heat Wave” (from 1933’s As Thousands Cheer) is yet another generic production number for Ted. Jim deploys “It’s a Lovely Day Today” (from 1950’s Call Me Madam) to illustrate the charms of the farm to show-bizzy Lila, who then breaks their engagement. Lora Lee Gayer’s Linda has been given an obscure Berlin solo from 1948 called “(Funny When There’s) Nothing Left to Say” whose sentiments are apt for her character, but the music and staging, and Gayer’s skill, can’t compensate for the song is forgettable. “Shakin’ the Blues Away,” a showstopper from Ziegfeld Follies of 1927, is a tour-de-force for choreographer Denis Jones and his skip-rope and tap dance ensemble. But its cheer-up sentiment and revue source only serve to remind us how extraneous it truly is. In Act 2, “Let’s Take an Old-Fashioned Walk” (from Miss Liberty, 1949) alert us that Jim and Linda are really an item, and both know it.

Perhaps the most egregious of all is “Easter Parade,” (used in the original film, but written for “As Thousands Cheer” in 1933) whose shrill orchestration and sloppy vocal arrangements butcher the song. 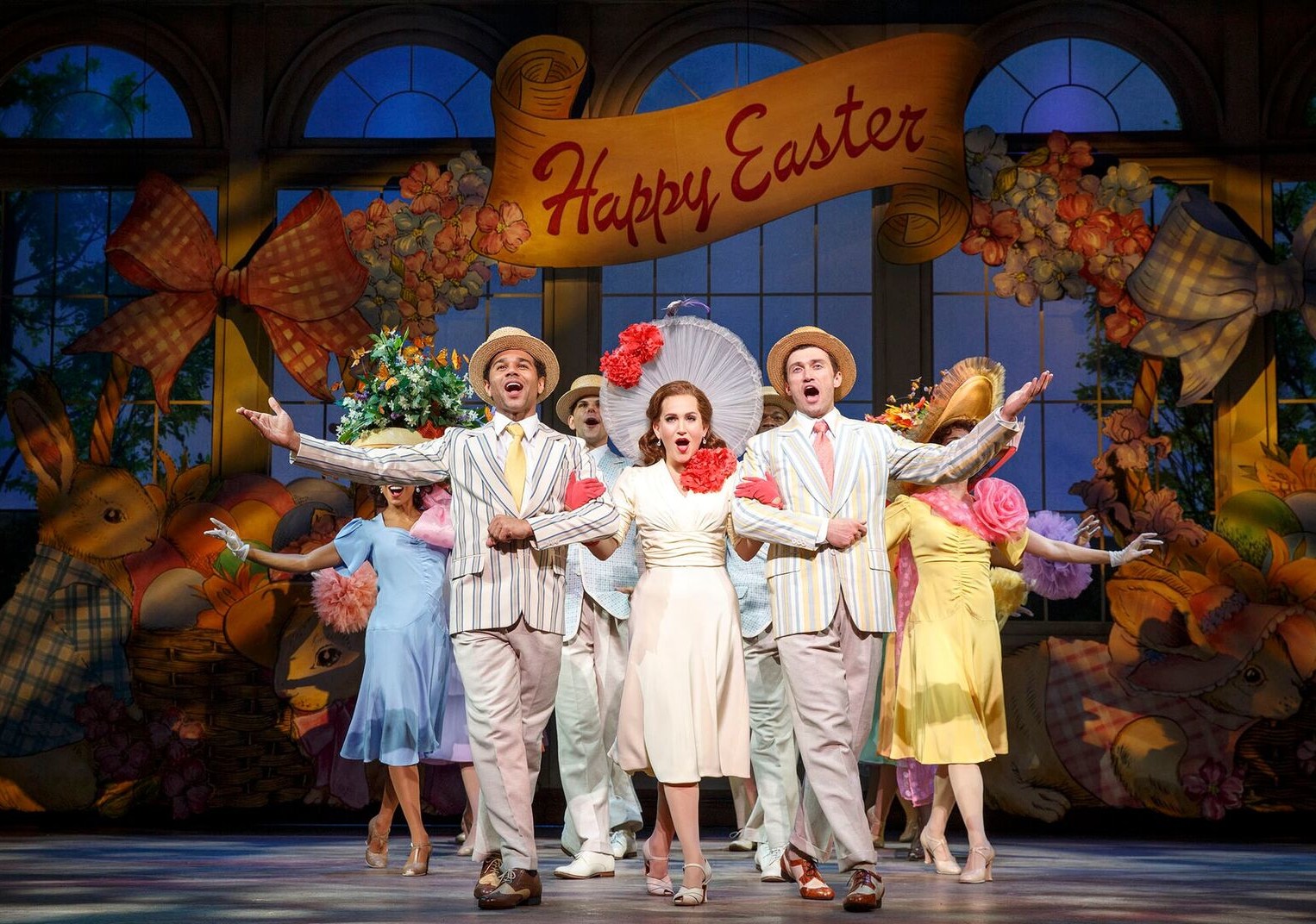 Even if Irving Berlin famously resisted others re-purposing his songs in his lifetime (unless he decided to do it himself!), I see no objection to doing so for new work for today’s musical theatre if it is done well. Gower Champion’s staging of 42 Street set the gold standard for this sort of thing in 1980. The Gershwin catalogue has been re-arranged and raided to create terrific new musicals such as Crazy For You, My One And Only and (perhaps to a lesser degree) Nice Work If You Can Get It. Berlin’s own White Christmas (whose plot closely parallels Holiday Inn) was similarly reconceived for the stage first at the St. Louis MUNY in 2000, then in Boston, Los Angeles in 2005 and other cities before braving New York critics in 2008.

Regrettably, the same attention to detail and respect for source material is missing here. Anna Louzos’ sets are dull, flat and look cheap, which is all the more noticeable as Alejo Vietti’s handsome costumes are outstanding in their period detail and charm.

The usually reliable Larry Blank’s orchestrations for a band of 15 divided between two balcony boxes sound overly loud, more Nelson Riddle 1959, than the 1946/47 in which the show is set. Maybe they will sound better on a cast album? 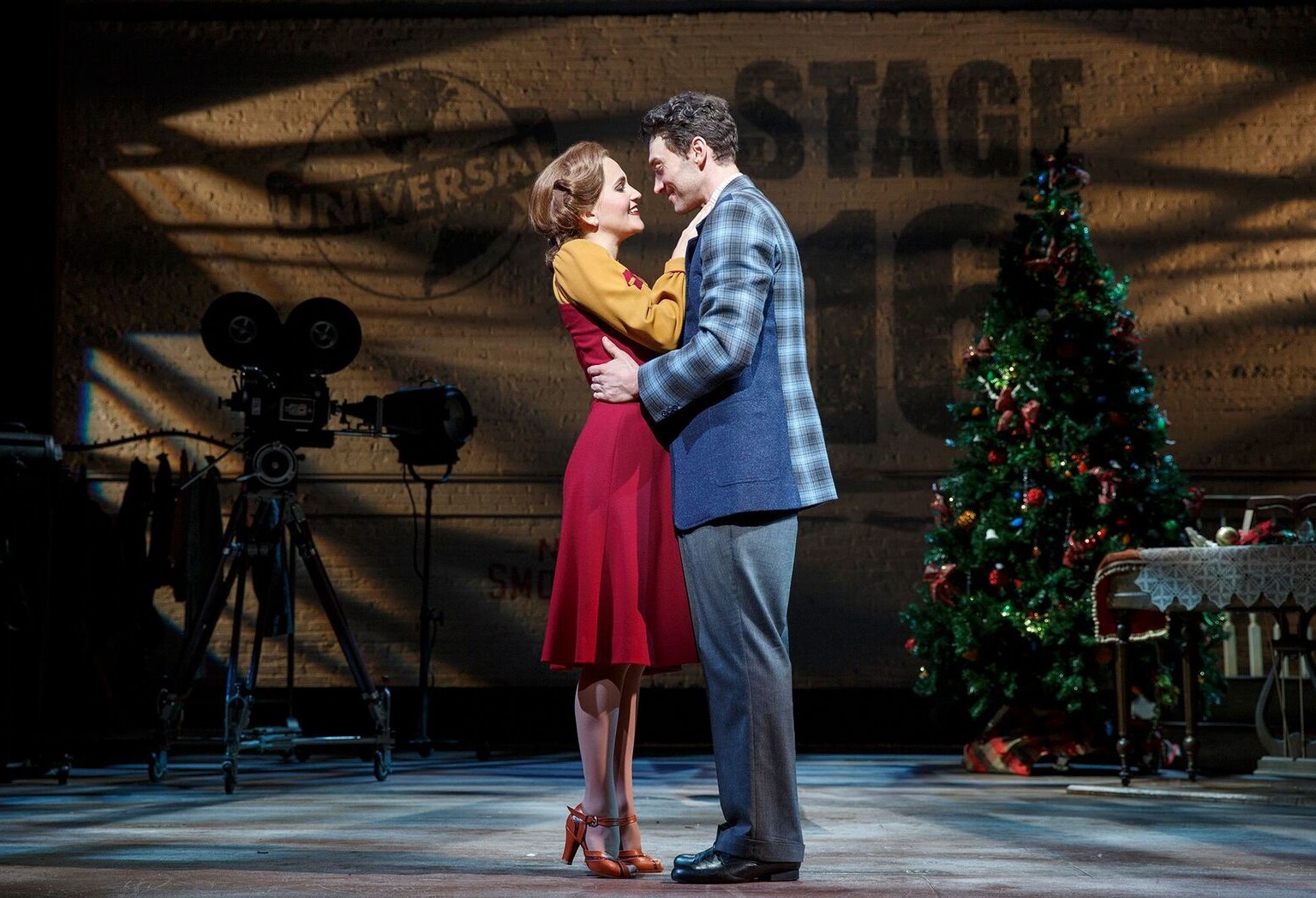 Denis Jones’ choreography is often a plus in its athleticism and period style, but the songs seldom offer him much opportunity to depart from predictable musical comedy tropes. Corbin Bleu, saddled with re-creating the memorable firecracker effects Fred Astaire did on so well on film with “Let’s Say It with Firecrackers” but without the option of film re-takes, does well indeed. Why was the audience reaction so consistently tepid as the actors and dancers toiled so hard to please us? Too often Greenberg’s staging rushed from one musical number to the next, one scene dissolve to the next, without allowing the musical numbers to build to a high. Virtually every scene and song have been given equal weight, punched up with generic good cheer and energy, but no distinction. How is it that twenty-two Irving Berlin songs rush by in a blur, not one of which is truly memorable?? C’mon, guys! Surprise us! 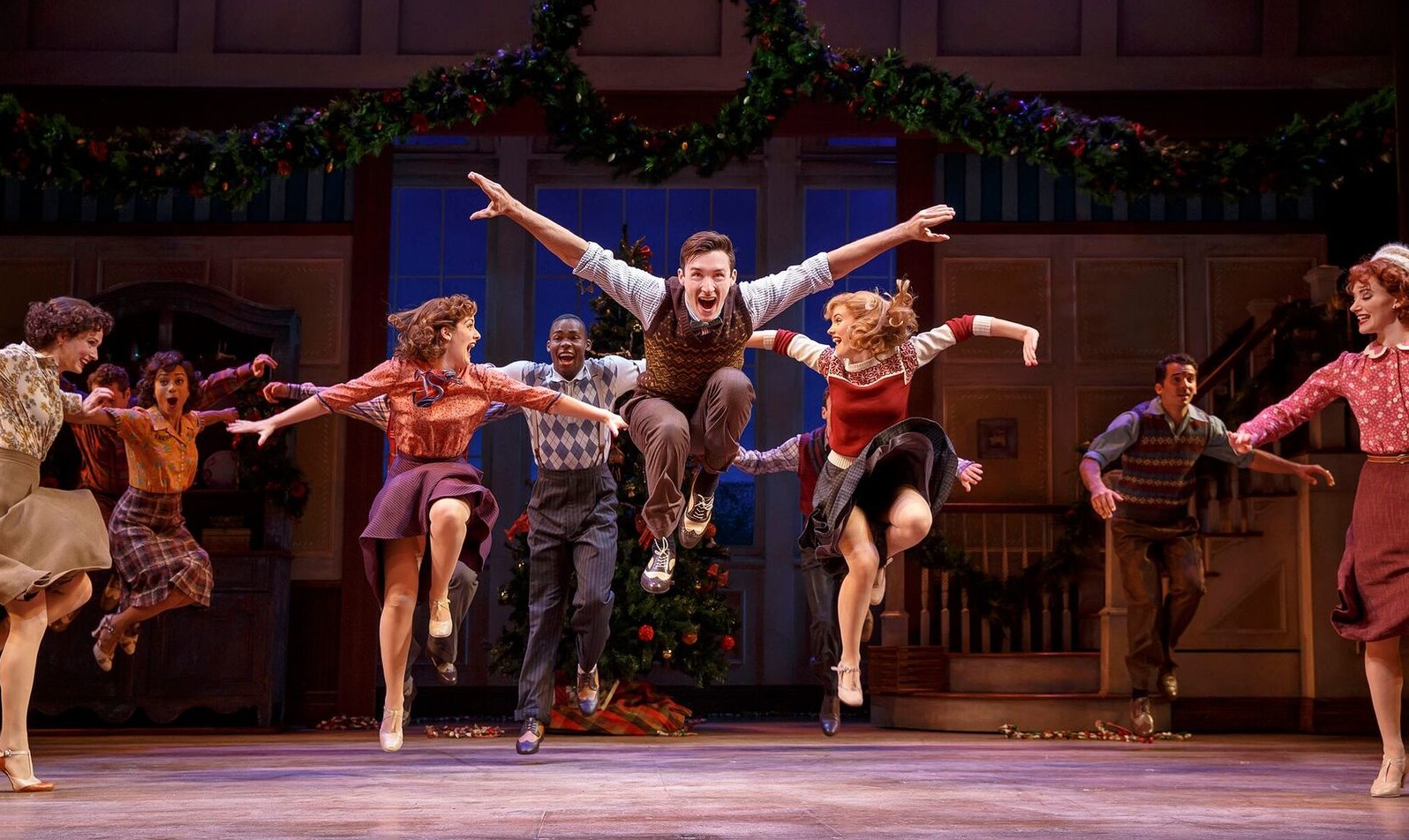 Big dance routine from “Holiday Inn” with the ensemble of the 2016 Broadway production. (Photo: Joan Marcus)

I regret to say what’s on stage at Studio 54 looks like Universal Stage Production’s mercenary attempt to create a new copyright work which can be then licensed for stock and amateur royalties ad infinitum. But creating a new work for the Broadway musical theatre is first and foremost a creative and collaborative endeavor. It is not like manufacturing a car, a pair of shoes, or a new flavor of ice cream. Messrs. Greenberg and Hodge, and Universal Stage Productions, are mere carpenters at work, lacking in a creative vision. 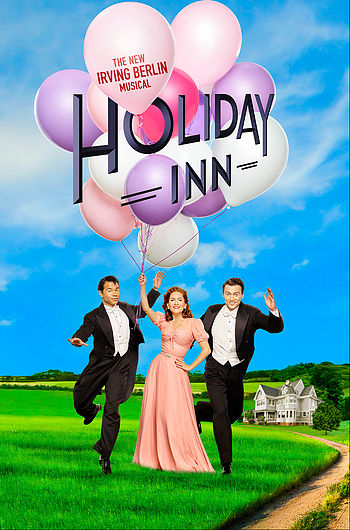